The Anime-You Quiz (again) and other scary stuff

Latest Site Update: TheAnimeFanboy let me put his hilarious fic Kenshinball up! Go read it, one and all!!

I think it’s about time to take the anime-you quiz again.

The Anime-You Quiz
So, consider your personality (not your online persona or whatever, but your own actual personality) and answer these questions as best you can, for fun since there aren’t any statistical results:

If you were an anime character, would you…….

I would have beautiful, narrow shounen eyes, possibly with triangular irises of a much brighter green than anyone’s eyes (certainly mine) actually are in real life. Also shounen-ai, yes. And hardcore yaoi lemon.

2. Have unnaturally colored and/or gravity-defying hair?

I would keep my spikes, but they might look a lot more like Sano’s. You ever consider how freaking close to impossible his hair is? I was going to cosplay him once, and it took me, like, twenty minutes — and a lot of gel — to get my hair to do that. It’s not as bad as Chou-chan’s, though *smooches Chou*

3. Be unnaturally proportioned in any way (besides possibly the size of your eyes)?

’Cept when I wanted to be mistaken for a guy (hell, I might even be a guy, or at least have a condition similar to Ranma’s), I’d be a bouncing hourglass babe. Yayeah!! I would be able to wear a kimono like Yumi’s, and it would threaten to fall off every moment, but it never would, da ha ha ha!! Also I would be muscular. Like, poseably muscular.

Logic dictates response E, but if I were an anime character I would have little use for logic, so I would say either B or D. Probably B, actually. Makes the battle less personal, I think, and therefore less traumatic…. *thinks about Shinji and possibly reconsiders* Obviously I think it would be cool to go with C, but I don’t think my personality is cut out for that kind of thing. And A is definitely out. I refuse to compromise my (already dubious) dignity like that. But why don’t they have a choice for psychopath? Like, the kind that jumps around saying “yiyiyiyiyiyiyi!” and licks knives? That’s what I really want >) I do that anyway. Well, not the “yiyiyi…” I have my own stuff that I say.

C… always on my own side, yes. Although I could do either good guy or bad guy depending on the show, the ethics involved, and the relative hotness of the people on the various teams.

Of course. I randomly speak in all sorts of languages IRL, don’t I? Different voices, too. (Chibi’ivil says: “Oh waow! You mean I would talk!”)

7. What would be your image song (lyrical)?

I-E-A-I-A-I-O by System of a Down. One flag! Flaggy but one! Painting the paintings of the alive!!! Ngyee hee.

8. What would be your theme music (score)?

Something laid-back, but with a possible hyper edge to it, and kinda weird. I dunno what fits that description, though, so I’ll just choose something I really like. Well, The Wars of the Last Wolves doesn’t fit my personality at all, despite how much I love it… nor does In the Hall of the Mountain King. I’m obviously not cool enough for Hoeru Miburo or Scattered Rain. Ah, just admit it, yousei, you’d probably get stuck with something crappy from WK or something, LOL!

9. What anime would you cross-over with in order to get with one of the characters, and who would it be?

I would track down all my anime husbands and wives one by one. Obviously I’d start with RK since most of them are from there… Saitou, Shishio, Yumi, Chou-chan, Usui, and Kama-kun… then WK for Farf, Schu, and Brad… then TNE for Dilandau-sama/Celena, then SKU for Juri-sempai. I would have loads of fun!!! 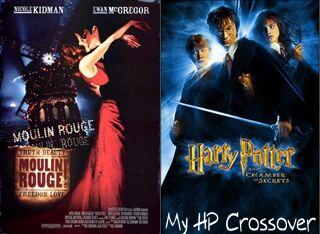 What’s your HP crossover? Click here to find out!!

This is just wrong. Just plain sick and wrong.

Guess what I did last night!!! I put all my good poems into a single document, and was pleased to find that there are 46 of them! I think I’ll have a party when I write my 50th good poem. *glees*