Oh, this was bad timing.

Saitou’s been ditched just when he most needs to get laid.

Saitou paused outside his apartment, absolutely silent and still, dropping the hand that had initially risen to open the door. He couldn’t go in yet. He had things to think about. It wasn’t that he was afraid, of course… it was just so inconvenient, all of it. It wasn’t that he thought he might have hurt his lover, either… it was just that the latter was so difficult to deal with when miffed. Saitou probably wouldn’t be getting any tonight, and that was remarkably bad timing.

He couldn’t shift the blame, though, or deny that it had been a lapse into unprecedented stupidity. He’d thought he had more self-control than that; maybe it had just been one fuck too many?

But really… they’d never made each other any promises, never suggested there was any emotion involved in their convenient situation. There was no reason to think the idiot would be angry, because what could he expect? Faithfulness? He should understand the nature of their relationship better than that by now. No, there was no good reason for anger.

But still… even for someone as callous as Saitou admitted himself to be, and even in as cold an arrangement as this, calling out the wrong name in bed seemed a little unkind.

He hadn’t expected this.

Oh, this was bad timing.

He stood in the entryway and couldn’t stop staring at the wall immediately opposite: at the great empty spot where not even the heavy mounting hooks that had lately been sagging remained. His eyes traced the slightly brighter pattern that marked where the sword had rested. If the zanbatou was gone, it could mean only one thing.

He moved swiftly through the other rooms of the apartment, confirming his first suspicion: nothing was left; he was entirely alone, and obviously with little hope of a reunion. That must have been why his lover hadn’t been around all day: he’d been busy moving out.

With a sigh he sank into the chair beside his desk and closed his eyes. That was no good, however, as the backs of his eyelids seemed to be burned with the image of a spiky-haired, golden-skinned young man in white who beckoned sexily to him but was not physically present to follow up on the tease. 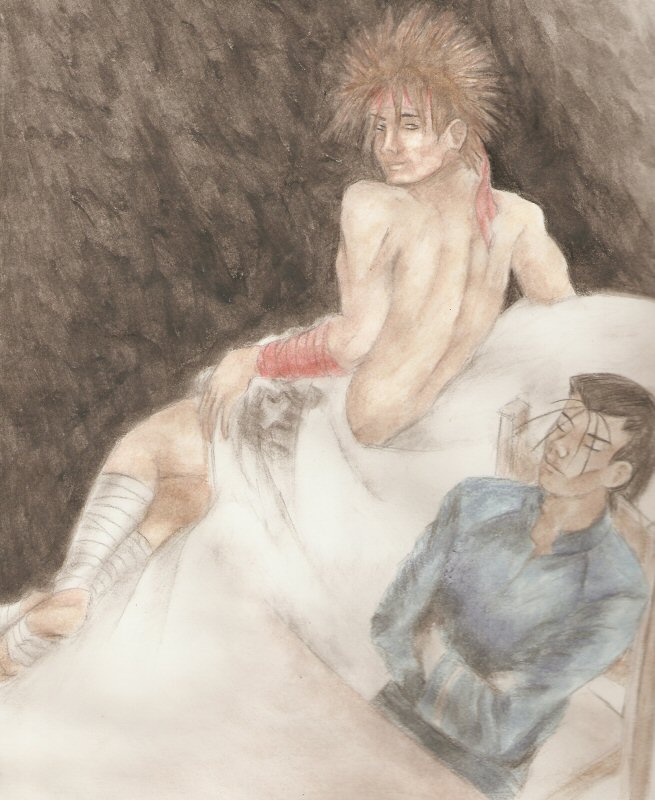 What was he supposed to do now?

There was something foreign on his desk that he hadn’t noticed before. He reached for the folded paper, unsure as he opened it what to expect — some kind of accusation, probably, an unnecessary explanation as to why Saitou found himself suddenly without a roommate. It appeared to have been written calmly, however, which was a good sign. That handwriting was always neater than he expected, no matter how often he saw it, and the words always looked quite different on paper from how he knew they would have sounded aloud.

You’re probably worried, but don’t be. I’m not mad or hurt or anything. I knew all along you were only with me because I reminded you of him. The sex was always good, but we each like someone else, right? You probably think this is really bad timing too, what with him being in town for that girl’s birthday — you’re probably horny as hell — but I’ll tell you something I found out. The little thing he’s got going with Shinomori is exactly the same as our little thing. Shinomori didn’t want the girl until she was legally an adult, and was just with your boy because he reminded him of her. They ended it a while back since she was going to turn eighteen soon. I don’t think she knows about them, and I don’t think he knows about us. So go get him!

P.S. I can’t remember if this wakizashi is mine or yours. I’ll bring it to work on Monday so you can tell me.

At first Saitou was slightly stunned, staring at the words as if they were some sort of magic spell that held him entranced. But after a moment, as that image he’d watched for an instant on the back of his eyelids only seconds before seemed to become more material and a good deal more plausible, he smiled. Folding the paper again neatly, he stood and looked around the room that now bore no traces of Chou’s ever having been there. The broomhead had more sense than he’d thought; certainly he had good timing. Perhaps Saitou would get laid tonight after all.

He thought it might be nice to visit the Aoiya with a birthday greeting for that weasel-girl.