All Sorts Of Good Details

“You’d probably rather not know why you’re here, but I figure I better tell you anyway.”

That’s what Sano is telling Chou about Saitou.

All Sorts Of Good Details

Chou regained consciousness to a splitting headache, the reflection that daylight was just pure cruelty in the sky for being so bright, mild curiosity at his somewhat familiar surroundings, and the oddly worried-sounding and subdued voice of Sagara Sanosuke — “You awake?”

“Yeah,” Chou groaned. “The fuck…?” It felt like a hangover, but he could not for the life of him remember… “Whydzthis look like Saitou’srom?” He’d seen it once or twice during his time reporting to Saitou, but why would he be there? And with Sanosuke?

“It is Saitou’s room,” Sano replied quietly, “and you’d probably rather not know why you’re here, but I figure I better tell you anyway.”

Chou didn’t want to sit up, but the roosterhead’s tone was proddingly strange. Still, it took a moment before he could get his eyes to focus on the distinctly agitated form of the other man. The other, barely clothed man. What had happened last night??

“It’s like this,” Sano said: “about right after you quit working for him, Saitou went fucking crazy.”

“I mean like sex-crazy. It just came out of nowhere!” Sano’s voice dropped almost to a whisper as if he were afraid someone might hear; it made Chou very nervous. “He just started going after anyone he could get… half the good-looking guys in town’ve been his bitch, and there’s nothing none of us could do about it ’cause he’s got connections like crazy and he’s too strong even for a group of us to take down.”

“Shit!” Chou growled, gripping the blanket around him and picturing Saitou’s psychotic yellow eyes all sex-hazed and predatory. “You’re fuckin’ kiddin’ me!”

“No.” Sano shook his head gravely. “I’m his favorite, I guess, probably ’cause he always hated me so he gets off on dominating me all the time. Lucky I ran into you last night before he found you; he was so busy with me he didn’t get to you, and then he had to go do some emergency shit at work. I dunno when he’ll be back, but you’d better get out of here. He’d know when the drug would wear off, so he might be back any minute.”

“Drug?!” So it wasn’t a hangover at all. “Shit, shit, this is fuckin’ crazy!” Chou was scrambling to his feet, but, losing his balance — not to mention getting tangled in the blanket that really did smell terribly of cigarettes — he fell back to the futon. “Always knew’e was off his fuckin’ nut, but this is…” His eyes went wide. “Where the fuck are my fuckin’ swords?!”

Chou looked around in wild consternation at Sano’s sudden tension and the very obvious sound of footsteps in another part of the house. Before he could say anything, Sano had jumped to his feet. “He’s back; shit, yeah, that’s definitely him. Look, I’ll go distract him, try to get him into another room so you can get outta here.”

“I’m not leavin’ without my swords,” Chou insisted.

“Which is more important, your swords or your fucking ass?”

Picturing that crazy bug-bastard’s eyes again, Chou wasn’t sure how to answer this question.

“I gotta get out there, man, or he’ll be in here after you.”

“No!” Sano replied frantically. “You’d never be able to beat him, and it would just turn him on! ‘Sides, you can barely even stand up yet!”

Chou had to admit that this was probably true. “Shit, this is fucked up…”

Sano was at the door. “I’ll see what I can do… you just get going soon as you can walk.”

“Th-thanks,” Chou stammered, wondering how soon that would be and whether he would be able to escape this situation.

Saitou watched as Sano emerged from the bedroom half clothed, closed the door behind him, and seemed to struggle for a moment to contain a fit of laughter.
“There’s my undercovers cop,” the young man finally said. “You’re back early.” (Although he didn’t seem at all surprised.) And, flinging himself on the officer, he attempted to kiss him.

Saitou, who had been frowning at the strange display of amusement, now frowned at the haphazard mess of sheathed weapons strewn across the floor from wall to wall; he refused to be kissed. “Do I even want to ask what Chou’s swords are doing in my house?”

“He was in the area,” Sano shrugged, “and I ran into him, and we went drinking.”

“For future reference,” Saitou responded, “your drinking companions stay at your apartment” — fixing him with a flat stare that, while not far from Sano’s face due to the younger man’s still being draped over him, was far from pleased. Or at the very least in the living room, he added silently; he would not say it aloud, as the smallest degree of allowance would encourage his irresponsible lover to take even more liberties. 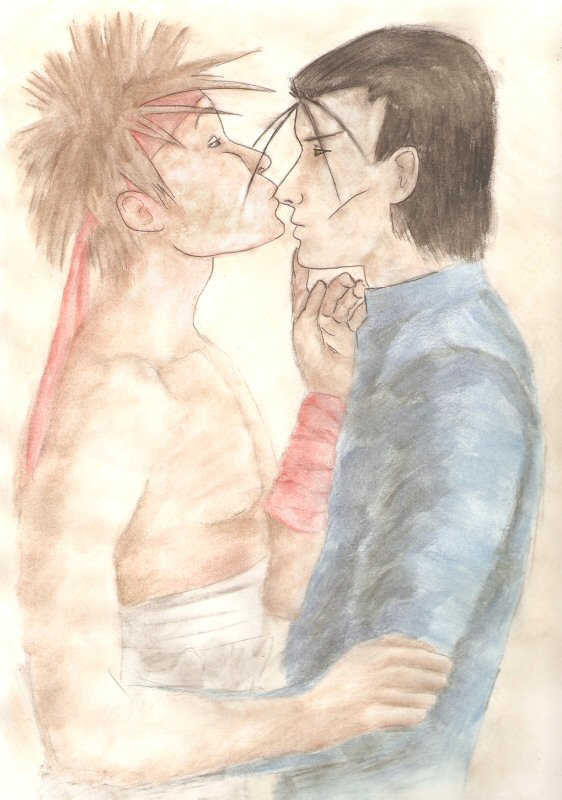 The wolf’s eyes narrowed suspiciously. “Why are you so cheerful?”

“Because you’re back in town half a day earlier than I expected you,” replied Sano in a tone of overwhelmingly untrustworthy innocence.

“I’m good enough!” protested the jovial Sano. “I can convince a drunk guy of just about anything. Or a hungover guy, even.”

Saitou shook him off and reached for the bedroom door, his eyes still narrowed.

“Aww, c’mon, the poor bastard’s feeling like shit, and now you’re gonna kick him out?”

“I believe I have a right to determine who inhabits my own bedroom,” Saitou replied coolly.

“Fine, fine,” Sano shrugged. “Go in there; freak him out; whatever.”

Saitou turned briefly. “Does he know about us?”

“Oh, sure,” Sano replied in a deliberately offhand manner that failed entirely to conceal the slyness in the remark. “He knows all sorts of good details.”

Sometimes I wish I had the resources to play this kind of elaborate practical joke, but in actuality I would find it too cruel. Here it’s fucking hilarious, though. Messing with Chou is always fun, of course. This also gets points for “undercovers cop” and Sano kissing Saitou’s nose. I’ve rated this story