Saitou and Sano come to an arrangement that may or may not have anything to do with cars.

“What’s with that look?” Sano wondered as he slid into the booth across from the scowling man and immediately stole his nearly expended cigarette. 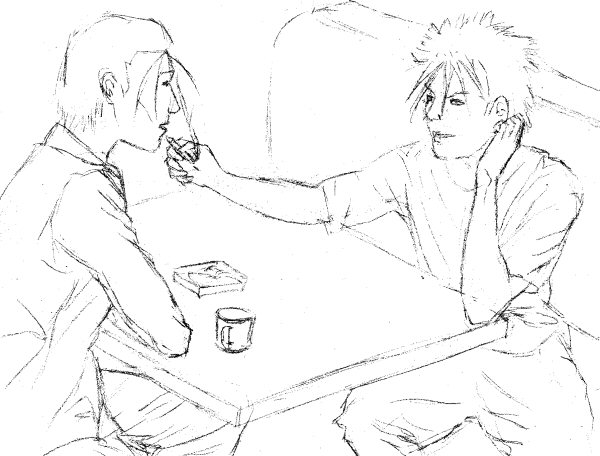 Used to this, Saitou snatched it back before Sano could take more than half a drag, and asked in reply, “Are you aware of how fast you came into the parking lot?”

“I can give traffic tickets, you know.”

“You would, too, wouldn’t you? You live to make my life difficult.”

“Is it really that difficult to follow the speed limit?”

“Yeah, it is! It’s fucking frustrating! People get all up on your bumper like ‘Hurry the fuck up!’ and then they roar past you and’re gone.”

Saitou smirked. “And then you turn on your lights and siren and watch them twitch because they didn’t know you’re a cop.”

Sano gave him the finger and in the same movement snagged the new cigarette Saitou had just lit. “Yeah, I bet you do enjoy that,” he said, trying to keep the stolen item away from the officer and smoke it at the same time, and failing at both. “But some of us aren’t cops, in case you forgot.”

“You better be careful what you’re offering, pig! Your car’s a lot nicer than mine; I might never wanna drive myself anywhere again.”

“You’d better be careful what you’re calling me, idiot, or I might retract the offer.” The cigarette dodged Sano’s pursuing fingers as it made its way back from the ash tray to the officer’s mouth. “I’ve seen the kind of trash can you make your car into, after all, and you’re not doing that to mine.”

“I could probably not throw shit on the floor…” Leaning back and putting his hands behind his head — mostly in order to look innocent — Sano finished with a grin, “if I got to choose the radio station.”

“And make me suffer that senseless noise you call music?” Saitou sniffed.

“Well, I guess we could throw in some of that whiny ‘classic rock’ shit you like sometimes too,” the younger man shrugged, “when I’m feeling nice.”

“I’m not a chauffeur. You’ll have to wash the car every week, and taking it through a cheap car wash won’t do. It’ll need waxing, too.”

“Fine, but I ain’t pumping gas; I hate the way that shit smells.”

“I wouldn’t trust you with it anyway.”

“But you’ll really pull people over so I can laugh at ’em?”

“Remember who you’re talking to.”

Sano grinned broadly. “I could handle not speeding forever, in that case.”

“Good,” said the cop with a smirk.

At an unexpected darting movement from Sano, the cigarette changed hands again. This time, though, the contented Saitou just brought out another one and lit it, trying to trace the conversation back to the exact moment it had stopped having anything to do with driving.

An autosite is the opposite of a parasite, and, though I can only find that the term is ever actually used in reference to conjoined twins, I didn’t think it was too much of a stretch to use it here and get a good play on words out of it at the same time. I’ve rated this story