“Oh, good, I hoped you’d still be up,” was Kaoru’s greeting.

Sano and Kaoru are up late doing completely different things.

Sano paused his game and pulled the buzzing cell phone from his pocket.

“Oh, good, I hoped you’d still be up,” was Kaoru’s greeting.

“Yep, just playing video games,” Sano confirmed, wedging the phone between ear and shoulder and resuming the aforementioned. “What’s up?”

“I just needed somebody to talk to. You don’t mind, do you?”

“Oh, I was just worried you might not be too excited just to chat with me when I kinda stole your best friend…”

“Aw, don’t worry about that… it’s pretty normal for a guy not to hang out with his friends so much after he gets married.” Well, Sano had been a little annoyed at first, but had eventually found other sources of entertainment. “So is everything OK?”

“Yeah…” She sounded hesitant, and Sano restrained his urge to chuckle as he speculated she had some kind of girly problem she wanted to discuss but he was her only acquaintance likely to be awake at one in the morning.

“Everything OK with Kenshin?” he prodded.

“C’mon, you called me,” he laughed; “don’t make me guess what you wanna say!”

She laughed a little too. “It’s silly, though.”

“Then I’ll definitely never guess it. C’mon, spit it out!”

“Well, I’m waiting for Kenshin to get back from his business trip. He had a late flight and then that long drive from the airport, so it’ll still be a while before he gets home.”

She sighed. “He told me not to worry about waiting up for him because he’d be so late, but I’m doing it anyway.”

“Yeah, I thought people only did that in romance novels and country songs.”

Sano laughed again. “Nah, I figure that’s probably pretty normal too for someone who’s only been married a few months. It is cheesy, though.”

“But you still mention ’em,” Sano chuckled; “way to be paranoid.”

“I know, I know,” she answered somewhat irritably.

“You should be worried about what happens if he accidentally drives through a time/space portal and ends up in, like, ancient Japan or something! Or what if aliens landed and he got tangled up in this big government conspiracy and had to disappear and change his name and shit?”

“Oh, great, thanks, now I’ve got more things to think about! But, seriously… when I’m worried not about anything real, just… worried… I come up with real things like car wrecks and robberies, kindof as an excuse for how I feel, even if I know they’re not really likely to happen.”

“Shit, girly, you got it bad! Good thing Kenshin’s job ain’t dangerous, or you’d have problems even when he just worked late! Maybe you should be reading romance novels instead of calling me.”

“Now, just a minute ago you said it’s normal!”

“I’m just giving you hell. You’re a perfect match for Kenshin, you know that?”

“I’m not sure how you figured that out just from this,” Kaoru replied, smile evident in her tone, “but thanks anyway. And thanks for listening to me.”

“I should let you get back to your game.”

“I been playing this whole time! I’m skilled like that.” Actually he’d died twice. “But if you wanna go listen to some country music until Kenshin gets home…”

Kaoru laughed. “Now you’re never going to let me forget this, are you?”

“See ya.” Sano yawned and stretched, and, after glancing at the time, shoved his phone back into his pocket and returned the greater part of his attention to the TV screen.

After another half hour or so, there came the sound of a key turning in the door. Sano glanced up from his fictive destructive efforts with a smile, then went intently back to them. The door opened and in came Saitou. He locked up behind him, then stepped over to Sano and looked down. Glancing at his watch and back at the young man, he smirked, “You’re going to be even more useless than usual at work in the morning.”

“Oh, shit, I didn’t know it was that late!” Sano set his controller aside and crawled over to turn off the TV.

“And didn’t you already clear that level?” Saitou began to remove and put away his gear.

“Huh? Oh… I wanted to find a secret area I missed.”

“So, how many shootouts did you get into today?”

“Knife fights? Djyou get to break up any of those?”

“I barely made a single arrest, actually.”

“What kept you so late, then?” wondered Sano in surprise that hid his relief rather efficiently.

Saitou, closing the closet door on his bullet-proof jacket and other accouterments, moved to seize the young man and kiss him. “Bedtime for little boys,” he said when that was finished.

“Yeah,” said Sano, sounding neither regretful nor penitent as he accompanied his lover into the next room; “I can’t believe I lost track of time like that…”

*__* Check out the awesome fanart Avek did for this story: 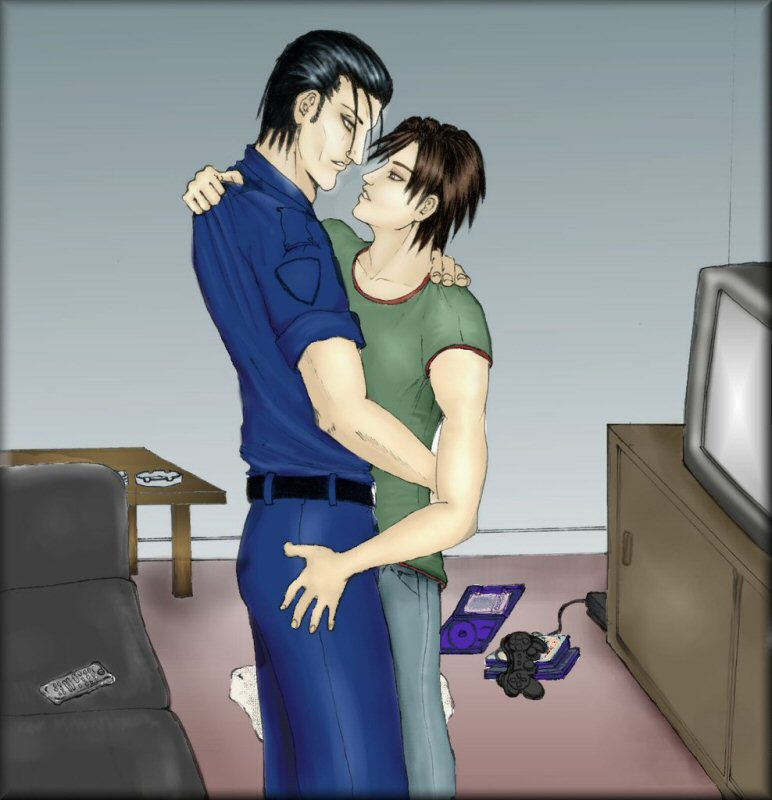 . I’ve found that people with less paranoid imaginations don’t really get it.