“I know this is an Aku Soku Zan thing too,” Sano went on in a more serious tone, “but you gotta sleep sometime.”

Saitou removed his gloves, briefly massaged one of his temples, lit a new cigarette, and settled in for another perusal of this seemingly random collection of evidence. It was his fourth cigarette and his sixth perusal; when each was spent, and he richer by no significant insight, he sighed and slumped a bit.

Rustling sounded behind him, and presently Sano’s strong warm hands slid down over his collarbones. As the young man’s body pressed against his from behind, as closely as possible with the back of the chair between them, Sano half yawned in his ear, “I shoulda known better than to expect you any time soon.” 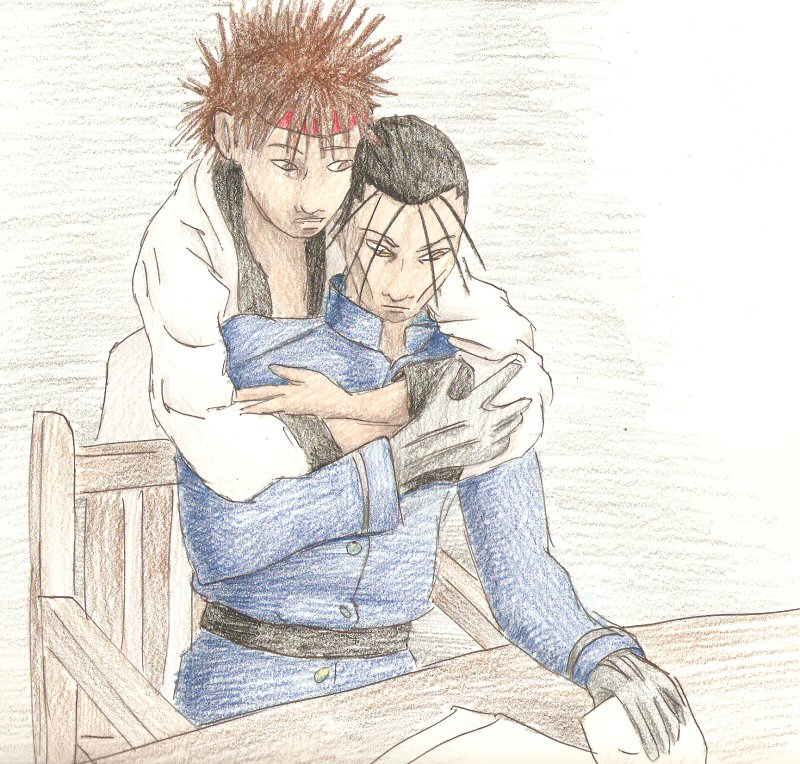 Saitou let his head fall against Sano’s shoulder with another exhalation. He’d been concentrating so hard that the unrelated rest of the world had gone out of focus, and now Sano’s warmth against him restored his awareness abruptly. He hadn’t even realized how long he’d been sitting here; it was probably three in the morning by now.

Sano’s hands roved slowly across his chest in an almost massaging motion, and now he was leaning forward to look at the desk. “You’re not even actually doing anything, are you? Just going through those same notes.”

“There has to be a pattern,” Saitou muttered, sitting up straight again and forcing his eyes back onto the papers in front of him.

“No, there doesn’t,” replied Sano flatly. “There isn’t always a connection between shit like this.”

“There is here,” Saitou stated. But the notes on the desk were blurring.

“There are other reasons I might want to wrap up a case quickly. Don’t assume I’m as frivolous as you.”

“I don’t think trying to keep up your reputation is frivolous.”

“And I know this is an Aku Soku Zan thing too,” Sano went on in a more serious tone, “but you gotta sleep sometime.” Saitou looked down at his papers again, but Sano persisted before he could speak. “Come on, man, it’s not a murder case! Sure, these guys are all organized and getting away with expensive shit, but it’s not like anyone’s dead.”

“You’ve been reading my notes,” Saitou remarked in some surprise.

“I gotta find something to do while you’re busy,” shrugged Sano.

“There are quite a few more useful things you could be doing.” But Saitou couldn’t help smiling as he made this remonstrance. He stood, pushing the chair aside and turning into Sano’s embrace.

After a warm, leisurely kiss Sano said, “Here, let me help you,” and attacked the buttons of Saitou’s jacket.

Helping Sano ‘help’ him, Saitou chucked low in his throat. “And here’s the real point of all your persuasion. Don’t you ever think about anything else?”

“I’m afraid you’re going to work me to death one of these nights,” Saitou smirked.

“That would be a way better way to go.”

Saitou had to agree.

Sometimes all he really needed in order to solve a problem was to step back and think about something else for a while. Sometimes he forgot this in his single-minded pursuit of evil. Sano’s intervention might not have done much to compel Saitou to rest, since dawn found him again seated at his desk in full uniform, but now as he looked at the collected information all the pieces of the pattern were falling into place almost without effort.

As he gathered up his things, ready to head to the station and initiate a plan of action he’d been miles away from even forming just hours before, he threw a fond smile over at his sleeping lover. His involvement with Sano had more benefits than merely his own perpetual happiness.

This fic is dedicated to TsukiNekoSama, an old friend from DeviantArt that used to like this pairing too.