I guess that’s what we are… just kids who don’t know what we’re doing. But at least we have each other. I think.

The ambiguous comfort two confused soldiers can offer each other may be precisely enough.

I would get naked for Heero Yuy anytime, anywhere, no matter what was going on. Back alley? Sure. Open street? Why not? Fire fight? Bring it on. Space battle? Well, you get the picture.

OK, I may be exaggerating just a little. I might have to give him an I.O.U. if I was on a mission at the time. But you’d better believe that when he comes in, dirty, ragged, sweaty, tired, to the motel room we just happen to be sharing (absolute coincidence, I swear) and gives me that look, I’m not about to hold back.

Just because I’ve finally managed to get him to open up to me in certain ways doesn’t mean I can usually get him to talk about whatever this is that we’ve got going here, and it’s a little frustrating not knowing whether or not there’s actually an us in this situation because he always avoids the subject. He’s very good at avoiding subjects. But then sometimes he gives me that look, and there’s no need for words.

I hustle him out of his clothes and equipment and into the shower, mostly just because I don’t know what he’s been crawling through, but I can’t even wait for him to half get started cleaning up before I join him. It’s probably a good idea anyway; the hot water available in this place is limited, so it’s better for us both to get clean at the same time before it runs out. Not that I’ve really got anything ‘clean’ in mind at this point. This braid can last without attention for another couple of days.

I haven’t been able to decide whether I like it better when he tops or when I do. I know that what I like best is both in a row, but that’s not a frequent occurrence. We just don’t have that kind of time, even when we do happen to, absolutely coincidentally, be sharing a motel room because we’ve both got missions in the area. We need sleep — actually, I should have been in bed hours ago, but I was waiting around for him — so there’s no opportunity for doing things the way I’d really prefer.

I don’t have the faintest clue which he likes better either, but usually when he gives me that look, it means that he wants to take it from me. OK, I don’t really know that it does mean that; just that’s how things end up, and he doesn’t complain.

In fact I never get any feedback on this from him. Slower? Faster? Harder? Softer? Different angle? Different position entirely, maybe? It seems like it’s all the same to him, and if I ask, he just turns red and mumbles something I can’t understand; if I insist, he gets angry. But I must be doing something right, since he spreads his legs a little wider and shifts his hips with just the faintest groan of pleasure, and over my hand that’s braced against the wall he puts his own, his fingers pressing at mine as if he wishes they could be interlocked.

If only I knew, though, whether he really likes it like this or if there’s something else I could be doing. I’d do anything he asked, if he’d just ask. I mean, I’m noisy as Hell when he’s the one taking the lead, and he tends to do whatever I ask… I’d love to return the favor… But maybe he really is OK with it like this. I just wish I knew.

He doesn’t seem to have any problems orgasming, anyway.

And, God, neither do I, when he tightens up around me like that.

So afterwards there actually does turn out to be some real getting cleaned up. I just can’t help lavishing attention on my beautiful Heero, even if it is only with this crappy little hotel soap and a tiny travel bottle of shampoo that I could have used on myself but would rather use on him. 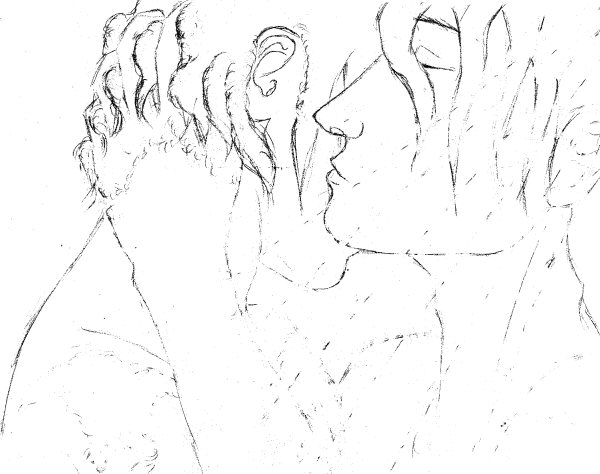 And sometimes… sometimes… I even get the feeling that he likes it. That’s probably wishful thinking on my part, though, since I don’t really know how I ever manage to get that impression. Not that Heero isn’t extremely good at subtle cues; I just never thought I was all that good at picking up on them.

I still don’t bother with any washing of myself beyond just the basic standing under the spray, since I’ve spent my entire allowance of hot-water-time on Heero; anyway, since I’ll be the one crawling through mud and God-knows-what-else in the morning, it doesn’t really matter. And I’d much rather get to the toweling-Heero-off phase quicker anyway.

Even when he’s tired out and obviously not terribly happy, there’s only so much coddling a guy like Heero can take before he pushes my hands away with a grumble and does the rest on his own. I don’t mind; actually, I think I would seriously worry if he let me do too much for him. But he doesn’t object to me checking the bed for parasites, turning off the lights, and half tucking him in before I lie down beside him. And then we sort of sink into each other in this nice kind of melty way where our breathing is almost synchronized and we are, if not totally relaxed, at least fairly comfortable together.

I love this more than anything, and it’s not just that the sex is incredible — though it definitely is. For a few hours in a cheap motel that thinks we’re a couple of illegal immigrants trying to keep our heads down and find work and a more permanent place to stay, before we have to go separate ways that are pretty much guaranteed to lead to gunshots and explosions and mobile suits battles, I can pretend to forget about the rest of the sphere.

I can pretend to forget that I have no idea who’s going to suffer because of what I’m doing, and the fact that nothing’s going to change that; Hell, they might be suffering already as I’m doing it; innocents might be hurting right now, and I can’t even offer them a quick death, because I have no idea who or where they might be. And at the same time, the fighting is so often invigorating and fun, and maybe it really shouldn’t be; maybe I’m turning into someone who enjoys hurting other people; maybe I’m not doing any of this because I think it’s going to help, but how the Hell can I even tell? Is the specific destruction I cause going to do any good, short-term or long-term? Maybe this whole damn plot is just an insane and pointless string of terrorism that’s actually just making everything worse… and maybe I don’t care. I don’t even know anymore.

But in here, things are different. Here, I can be with someone I definitely do care about, and concentrate on the good feelings between us. Here I know for a fact that I’m fulfilling a need of someone I maybe kinda sorta love. The simplicity and positivity are so totally opposite everything else I have to deal with in this shitty Hell of a war, it’s like we’ve shifted into another dimension entirely.

He’s clinging a little tonight, and I cling right back; we huddle together in the bed more like a couple of kids protecting each other from the dark than a couple of soldiers who happen to be ambiguous lovers taking a momentary break from a war. And, really, I guess that’s what we are… just kids who don’t know what we’re doing. But at least we have each other. I think.

“So what brought this on?” I wonder eventually, so quietly that he probably feels my words through his skin more clearly than he hears them. “Not that I’m complaining or anything.”

Heero takes an almost inaudible deep breath and actually answers the question, which is a bit of a surprise. In that forced tone he sometimes uses when (I’m fairly sure) what he has to say isn’t something he’s reluctant about, necessarily, but something he’s not entirely certain how to articulate, he murmurs, “Out there, everything is… twisted. Here, with you, it’s right.”

I wonder if he can feel my increase in heart-rate as he says it. Miserable as the sentiment itself is, at least in part, it’s fucking glorious to realize that he was thinking the same thing I was, even if he took about two hundred fewer words to express it.

“Yeah,” I whisper. “You’re absolutely right.” And I hold him tighter.

It’s funny how just a short little phrase like that can make me feel so much better about everything. I still may not be entirely sure about the degree of us I’ve got to work with here, I still definitely have to go back out and play Death God tomorrow, and, really, nothing in the world has changed… but somehow this kid who doesn’t know what he’s doing is suddenly a little less afraid of the dark. And I fall asleep relatively content, thinking that, for all I complain about the amount of effort it sometimes takes to get things out of him, at other times Heero really is every bit as eloquent as he needs to be.

Holy Tolkien, did I write something in the canon setting? It looks like I did. It’s a fairly generic soldiers-comforting-each-other-with-romance-or-the-next-best-thing kind of plot, but everyone has to write at least one of those, right? I think I’d read one of those in the GW world before I’d even ever seen the series XD I’ve rated this story