Friday is my birthday. The plan is to eat nachos and watch Megamind on Saturday. I don’t know whether I’ve mentioned it or not, but I’ve been trying to get my mom to watch Megamind ever since it came out, as it’s become one of my favorite movies and I think she will like it too. She madly resists watching movies, though, so I’ve had to wait for my birthday when she essentially can’t say no. However, if she rolls her eyes and sighs all the way through as if it’s a huge imposition to have to watch this movie for my birthday and she has a million and a half better things to do, this will be the last birthday celebration in which my parents are involved.

For some reason, I cannot actually locate my copy of Megamind. I seriously have no idea where it went. The little bonus DVD that came with it is in my DVD book where it’s supposed to be, but the movie is nowhere to be found. All that means is that I’ll purchase a new copy of it on Friday when I get paid; Zombie Girl has agreed to buy one or the other off me if/when I find the original copy.

I should really work on my art exchange piece today, but I don’t think I will. Rose Pale chapter 12 is too interesting, and there’s more freaky swimming to do. And at work I will probably also work on Rose Pale chapter 12, but it kinda does depend on how busy we are. We’ve been a lot busier lately, as I may have mentioned. Which is good for business, of course, which is always nice for job security and all that.

Schedules change on Thursday, which means I have to work on Friday, and the social experiment plan is this: I will tell every customer that comes in that it’s my birthday, and we will see how many of them ask how old I am. Most people are wary of asking a woman her age after a certain point, but often when someone excitedly announces that it’s their birthday, it’s considered good manners specifically to ask; it’s just that most women don’t excitedly announce that it’s their birthday after a certain point. So we’ll see which instinct is prevalent :D

I had one dream in which I was Spock and thought I had killed Kirk (a la Amok Time?) and had to call Starfleet and tell them about it. This was angsty, but there was also some incredibly hilarious aspect to this dream that I just can’t recall the details of… though I do remember that it was there. Then there was another dream about three witches making creepy dolls for children, and turning a fourth lady into a witch also. The children having the dolls was going to be part of some evil ritual; it was pretty badass.

Bryn hit level 80 finally the day before yesterday. Of course I would get my first level 80 now that level 85 is available XD Anyway, I was not having a lot of fun in Icecrown, so as soon as it occurred to me that I could leave, I did. I meant to go to Hyjal, but somehow ended up in Vashj’ir, where I am having a million fun. And this brings me to a thing I wanted to mention.

Certain aspects of the ocean (or any body of water that shares these attributes) terrify the shit out of me. Deep, dark underwater expanses, particularly where you can see the walls plunging down and disappearing into the depths, are seriously the scariest thing in the whole damn world. And then some giant freaking fish appears just out of nowhere, and, though it’s cool as hell, it’s STILL FUCKING TERRIFYING.

It really does seem to be the incomprehensible depth and volume of the water/area that does this. The aquarium in Denver is one of my favorite places in the world, and it doesn’t scare me at all. Maybe it’s because I’ve spent most of my life utterly landlocked? I’ve certainly never seen, in person, the type of freaky-ass deep water location I’m describing. But, then, who has, really?

Anyway. So here’s Bryn in WoW swimming around Vashj’ir, and it’s awesome, and she’s got a seahorse, and her spiders look hilariously adorable swimming alongside her. And then she happens to swim past the edge of the area, where, whoo, guess what! it drops off into unimaginable dark depths and extends out forever into shadow. So I’m already freaking out a little, AND THEN THIS GUY APPEARS. 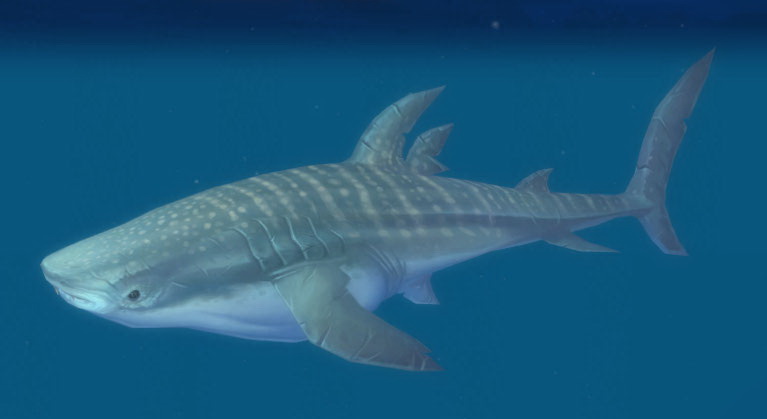 Only in the game, I could only see just about half of him because compared to the size of him, Bryn’s just a little tsetse fly and because part of him was still invisible in the dark water beyond. And I literally started to feel a bit ill. I just stared at him in fascinated horror for several seconds and then turned around and swam like hell in the other direction. Seriously, the fact that he’s in the game at all is really awesome, but OH EM EFF GEE GAIZ. WHY IS THAT THE SCARIEST THING THAT HAS EVER HAPPENED.

OK, now I will take a shower.