SHARED ITS MAGIC WITH ME

I don’t understand why every time a musical gets a movie version, it seems to be the movie-makers’ goal to cram as many big names into the production as possible. I’m not saying that the result is never good, but that it’s extremely worrisome (and, when the result isn’t good, annoying) that their first thought isn’t to find the best singers for the roles but to find the most recognizable cast to bring in the hapless masses.

That being said, I did mention recently how I feel about Hugh Jackman, and I’d already read that he’s done Broadway stuff before… he will at least make a very attractive Jean Valjean (and should be able to act the part just fine), and he certainly can’t sound any weirder than Colm Wilkinson did. And though I’m honestly getting a little tired of Helena Bonham Carter, I think she’s a perfect choice for the Thénardiess. But I’m not sure how I feel about Taylor Swift as Eponine. Once again, probably can’t sound weirder than the original, but… really? Taylor Swift? Well, it doesn’t matter. Movie of my favorite musical = I will watch like a boss. I just hope it doesn’t suck.

Well, my episode-packed weekend was fabulous, as expected. MmmmSherbii. What magic is this. Also, look at this picture: 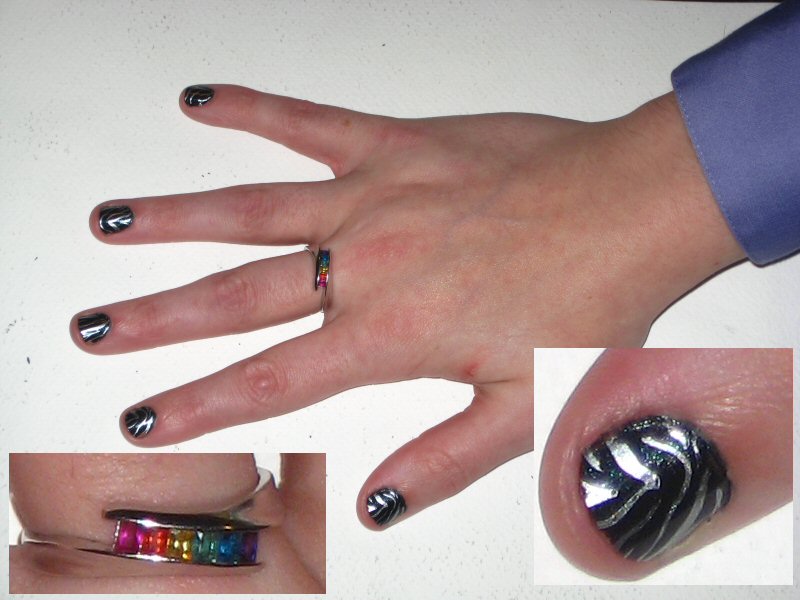 First off, you can see the ring I bought in Vegas. I’ve actually been wearing it, which is unprecedented; usually I don’t wear rings even if I do find and buy awesome ones. Another thing I bought in Vegas allows me to do the most badass designs on my nails; as you can observe, I’m having zebra stripes right now. I mention this because I got more comments on it at work today than anything ever (except my tie, which is also badass but I don’t have a picture of it) — and some of these comments were from males even. You know your nails are awesome when even guys notice thems.

OK, enough entry. Back to drawing.