I TRY ALL THE TIME

I shall force myself to make an entry.

Seriously, starting those birth control pills just as I would have started PMS made for, like, Super PMS Of Utter Destruction (Vorpal), and I have spent the last week in the most amazing bad mood. I generally don’t have bad moods at all, which just made this one worse; ugh. I’m pretty sure it’s passed or at least passing, so good jobon that.

Also, acne. Bad acne runs in my family, and I always had problems with it until last year in, like, April or something a doctor prescribed for me a miracle drug that has largely taken care of the problem. But this past week’s hormones were evil enough to defeat even that, so I’ve been all polka-dotted again just like the bad old days. It’s going away now, though, so good jobon that.

In such a mood, it is next to impossible for me to be productive; I’ve barely written anything and haven’t set pencil to paper all week (and we’ll see if/how that affects Rose Pale posting schedule; hopefully I’ll be able to get stuff drawn during the coming week and have no delay). One thing I can work on under those circumstances, though (besides video games), is music video editing. So I made this:

Choir practice yesterday was lots of fun, peppered with less fun. First off, I always sleep badly on Friday nights because of my psychological insomnia. Apparently having two things to do on Saturday morning (choir practice and then work) made it even more difficult to sleep, and I pretty much just didn’t. So I was extremely tired. I had some Diet Coke, which then, of course, made me sick, but at least kept me awake. But extremely tired + already grouchy + the less fun aspects of choir practice = a little difficult to deal with.

See, this is a choir full of people from my family’s church. They’re all quite nice, but they’re also all quite… churchy. They’re not aware that I don’t attend anymore, haven’t for over a decade, and in fact rather dislike quite a bit of the doctrine, even more of the subculture, and nearly all of the creepy attitudes both of those instill in the members. So their conversation is often rather trying.

Then, the first practice of the year is always much what I imagine a high school reunion would be: a bunch of people I never liked, barely remember, and don’t care about asking me the same stupid questions over and over and over. I work at a dry cleaner. Nothing new is going on in my life that I care to tell you about. Pookster is fine. Mostle is fine. Lester is sitting up there in the top row with the basses; go bother him.

Wow, that grouchiness really isn’t gone at all, is it? Anyway, the singing and the banter were as good as they always are, and my mom’s music and skills as a choir director remain totally badass. Plus the half-hour I spent in the nursery was fun, even if it meant I had to miss a third of the songs.

Lastly (I think), some pictures of my hair: 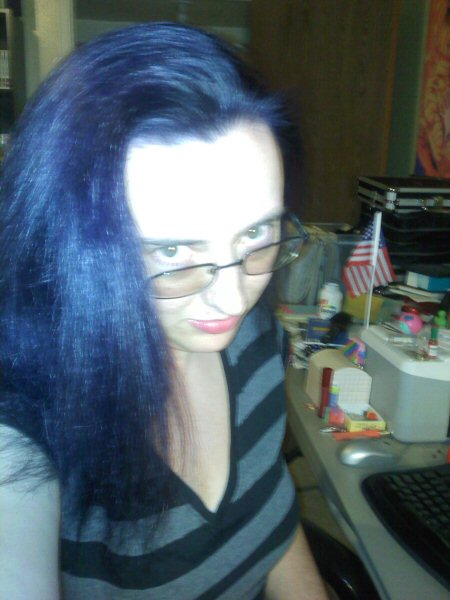 OH CRAPPY CELL PHONE PICTURES. This one’s from right at first, and you can see that the light on me was really strong at that point; it shows the blueness of it really well, but not the purpleness. This dye job hasn’t been fading well at all, particularly away from the roots; here’s a shot of the back after a single wash: 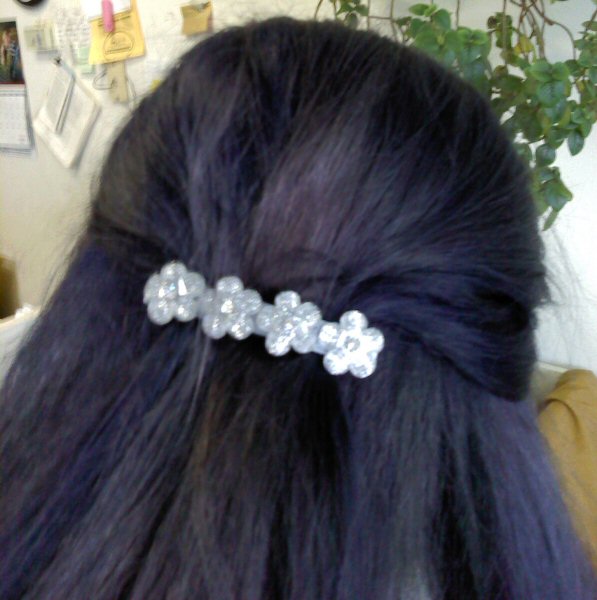 Admittedly that’s in lower lighting too, though. Also note the cute new barrette I bought. I don’t really care about how it fades; I’m not dying it again any time soon, so we’ll see how it progresses as time goes by. What I really need is a trim… it’s been about a year and a half now since I’ve had one, and my ends are all ragged. Whatevs.

Yeah, I think that’s the end of this entry.