And though he’s oh so far away, I hoped that he would stay

I baked about a million cookies for Lynn and took them in as soon as they were done, so hopefully there was some oven warmth left even then. I was crying the moment I walked in, and he had customers, so I couldn’t stay and chat. (“Chat” here meaning “blubber incoherently.”) But I did manage to ask him if he thought he and Zina will be OK, to which he just answered, “I don’t know.” Then on the way home I couldn’t stop thinking about the fun times we’ve had over the last year, and still couldn’t stop crying. And now I’m crying again -__-

However, once I got home, I discovered an item to cheer me up a bit. Lesta’s birthday was exactly one month ago today, you see, and the present I had planned for him turned out to take a lot longer than I had expected. We’re both bronies, and Lester collects playing cards… however, Hasbro has been remarkably lax on the “marketing to bronies” front, and no MLPFiM playing cards exist. So I figured I’d special order some from one of the many sites online that offers to print custom playing cards. And today they have arrived!

What took so long was finding 54 different pieces of art with enough vertical focus for card faces. I chose six each for the mane six (one humanized, and one each from KP-ShadowSquirrel‘s awesome gala dress series), and then one each for various secondary characters. Poor Scootaloo got left out because an image I found of Braeburn (whom I didn’t originally intend to include) was really nice-looking; hopefully she will forgive me and still date me when she’s old enough.

Here are a couple of pictures I just took with my cell phone (no, my hand wouldn’t hold still for the second one), followed by a few examples of the images (lower right of each is the artist’s DeviantArt name; I know it’s hard to read in this picture, but it’s fine on the actual cards): 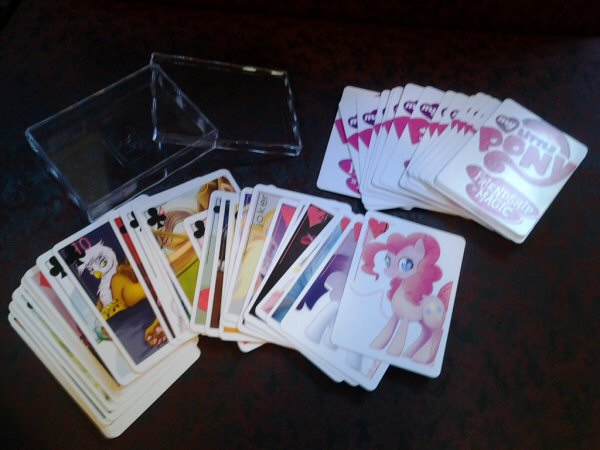 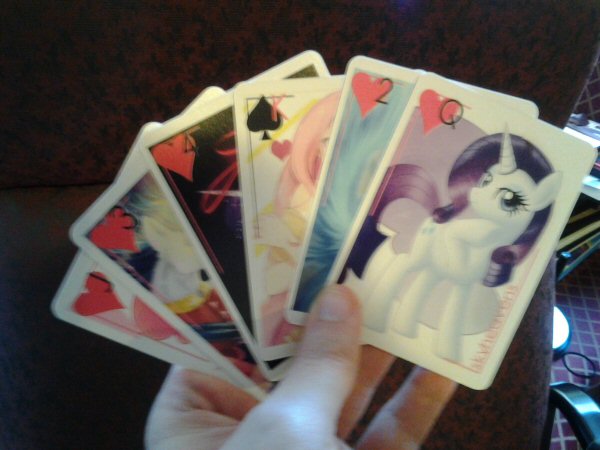 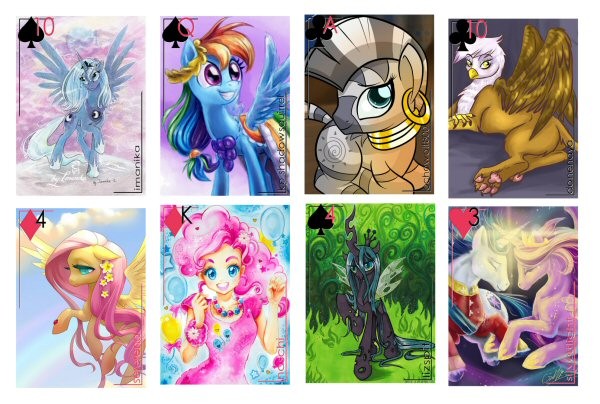 Incidentally, the site I used for this was Printer’s Studio, which, now that I’ve seen the quality of the finished product ($14 after shipping, BTW), I would heartily recommend for any such project.

So I am excited for Lesta to be done with work today so I can give him that present at last. And Zombie Girl will come over today, and that will be great. Until then, I will edit my story and probably do some other stuff, and today shouldn’t be so bad.