Finally the moment has arriiiived

My wrists are definitely getting better. I’ve been able to type some today, which is nice, since I’ve been working on Seeing Red and I love Seeing Red ^__^ But that was mostly what I’d written in a notebook already; I still can’t just sit here working on stuff because it hurts.

I had my school orientation today. It was fifteen minutes of content stretched into two hours of nonsense, but it did seem a little less painfully stupid than the last dreadful place. Keep your fingers crossed for me.

So here’s this shipping meme that looks like fun, and methinks I shall give it a try. Day 1: Your first ship ever – Éowyn and Faramir 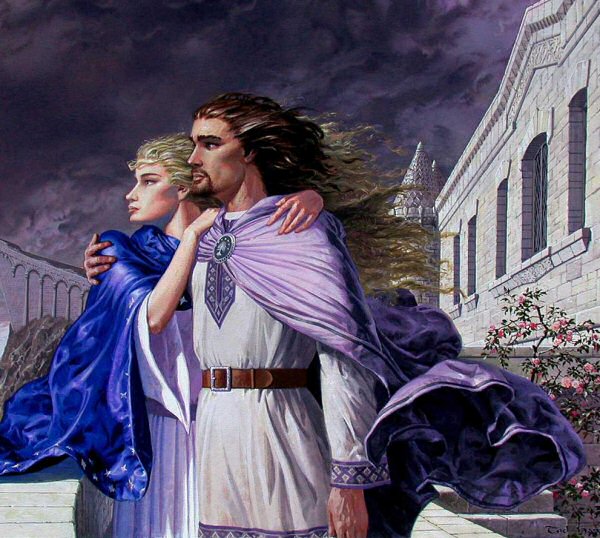 I wracked my brains looking for something from earlier in my life, but I couldn’t find anything. Thing is, though I loved romance even as a young child, it was more the mere presence of romance; it took a while before specific pairings began to catch my heart. Even Éowyn and Faramir, the first time around, attracted me more because the situation was so neat: these two characters that I already knew, both of them extremely awesome, each something similar to royalty, seemed to go so well together that I wondered I hadn’t thought of it myself. Though admittedly by that point in the book, not expecting romance is completely understandable XD

Later, as I came to recognize what a noble and admirable person Faramir is (I had appreciated Éowyn’s attributes from the first), I grew to love them as a couple even more. As a younger child I don’t think I fully understood the tragedy of Éowyn’s misguided fixation with Aragorn, but as I got older and grasped the situation in its entirety, it became all the more satisfying to see her legitimately falling in love with someone rather than just imagining she was.

Of course eventually I also became a little uncomfortable, from a feminist perspective, with certain aspects of their interaction. Tolkien did a pretty good job with Éowyn, on the whole, but there is that lingering, disgusting implication of her having stepped out of a woman’s rightful sphere — not without good reason, but still flagrantly — to take an active part in the war, and once she’s found a man to have a proper domestic relationship with, she can happily return to that woman’s sphere without regret. Even so, it’s still my favorite book; I take the bad along with the good, and I still like Éowyn and Faramir as a couple.

Here are the rest of the prompts, for my own reference and for anyone else that might want to try this meme:

Day 1: Your first ship ever
Day 2: A pairing you just discovered
Day 3: Your OTP
Day 4: Favorite crack pairing
Day 5: A crossover pairing you think would work
Day 6: Series that you have many ships in
Day 7: A pairing that disappointed you
Day 8: A pairing only you seem to like
Day 9: Your least favorite couple
Day 10: Ship that became canon even though you didn’t expect it to
Day 11: Character you like with several others
Day 12: Character you don’t like seeing paired with anyone else
Day 13: Couple you ship that causes intense feelings in its fandom (read: flamewars and the like)
Day 14: Couple you liked even though you knew it would end up badly
Day 15: A ship canon really messed with
Day 16: Favorite villain pairing
Day 17: Ship you talk(ed) about with people in real life
Day 18: Most annoying character that tried to come between a ship
Day 19: Favorite Hero/Villain pairing
Day 20: Favorite couple played for laughs
Day 21: Favorite opposites attract couple
Day 22: Saddest unrequited love
Day 23: Couple you only shipped after a long time
Day 24: Couple you like, but is overshadowed by another couple in a fandom
Day 25: Most popular couple in your favorite fandom (do you ship it too?)
Day 26: Best historical couple
Day 27: Another couple you shipped a long time ago
Day 28: A couple you shipped not nearly as long as you thought you would
Day 29: Favorite ‘birds of a feather flock together’ couple
Day 30: Couple you will still ship a few years from now

Now I have to decide what to do for the rest of the evening to keep myself away from the computer. Picture, I believe.