Today we went up to Manitou because mom wanted a few different things that were there. We ate at the cult restaurant, which I’ve been raving about to my mom for years ever since ZG first took me there; mom admitted that it was pretty well the best sandwich evar in the whole history of the world, so now she understands.

Then once we got home, of course I was looking around trying to decide what to do to keep myself off the computer. That picture of mine is almost done, so I thought about working on that… but the thing is, I started rereading Plastic earlier today while I was out shopping with my brother and waiting for him to come out of the bank. And I was like, I really feel like continuing to reread that; how annoying that I don’t have an audio version. So then I decided to record one. I got through the first of the ten files I have the story divided up into, so that’s a little more than a tenth of the way done. Poe knows when or if I’ll ever manage to finish that, but it was fun getting started, at least :D 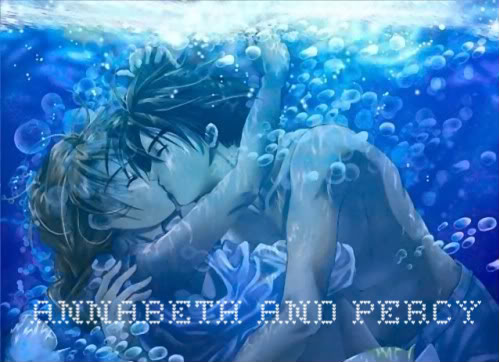 (I found this picture online but can’t figure out who drew it. I decided to use it anyway since it {sortof} depicts a scene I really liked, but if anyone happens to know who the artist is, tell me. Of course, given the generic nature of these characters’ visual design and the fact that the picture doesn’t match exactly what happened in the book {not to mention how much it reminds me of Watase Yuu}, this might well be a totally unrelated piece of art that someone has simple labeled with these two names. Either way, it’s lovely.)

I just barely finished reading the Percy Jackson and the Olympians series within the last month or so, and I have to admit that I didn’t exactly think characterization was the strong point of the books. Therefore, I’m not as fanatically attached to this pairing as I could be, but I still like it enough to mention it here.

I was terribly amused and intrigued by Aphrodite’s promise that Percy’s love life was going to be difficult (because Aphrodite was fond of him; that was hilarious XD). When Rachel appeared as a recurring character, I’ll admit I couldn’t decide whom I liked Percy with better. And I totally squeed at every instance of Percy showing interest in Annabeth or confusion over which girl he liked.

And then, when it became obvious that Rachel was going to be the new Oracle, I realized belatedly that I really did prefer Percy with Annabeth and it had just been a fairly subtle preference on my part. And their kiss was totally adorable.