Lesta went up to Aurora to try to cockblock the Westboro Fuckers Cult in their protest of the memorial service. I would have gone with him, but when he called to see if I wanted to I wasn’t home from my excursion with Zombie Girl. ZG and I would have just gone up and met him there, but we had with us her mom, who needed to go home, which is about the same distance in the opposite direction.

You know, whenever I hear about those monsters popping up somewhere, I honestly wish I did believe in Hell, because it would be nice to think of them writhing in agony for all eternity. OK, well, no. Forever is too long even for disgusting things like them. But for a while, maybe… 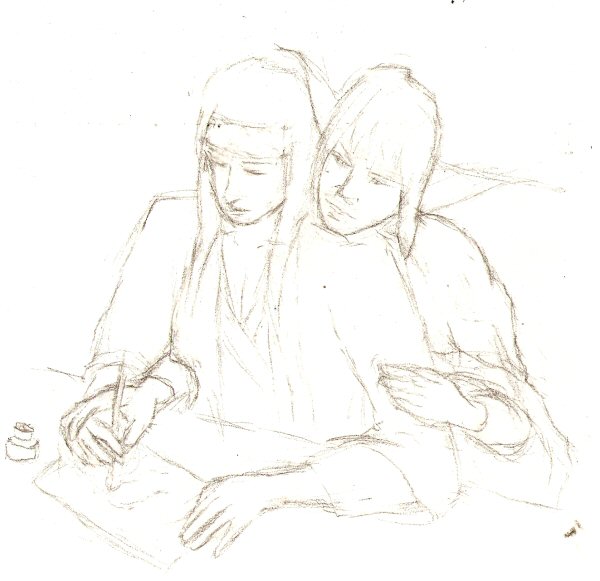 (Determined to have illustration for all of these, I have sketched a picture of this nonexistent pairing. Go me.)

This was a hard one. Since I rarely consider pairings bizarre as long as they’re written convincingly, “crack pairing” usually just means, to me, “a couple that never actually met in canon.” And as such, Hiko and Katsu are a good option (though, if we’re getting into that sort of pairing, I’m also fond of Hiko and Saitou or Hiko and Aoshi or Aoshi and Katsu or Katsu and Chou, or…….)

The reason I go for these guys together is that they’re both artists in half their lives and violent in the other half; I can really see them connecting over that. Also, just logistically, I can see Katsu living in Kyoto and continuing his newspaper and only seeing Hiko on weekends or something, which would undoubtedly help him get driven up a wall less frequently. And their involvement might force Hiko to start caring again about current events in the country instead of trying to ignore everything up that mountain of his.

I’ve only got this pairing going in one story I’m writing… and by “going” I mean “they’ll hook up near the end.”