I’m the belle of the ball, the star of the show, yeah

Well, I had my first day of school today. It was pretty stupid. We’ll see how stupid it continues to be; of course today was mostly bullshit getting-started stuff and not really any actual school. And they gave us these cheap awful backpacks with the school logo on… they’re the biggest backpacks I’ve ever seen. In case I ever want to smuggle a pair of twins into the classroom, I’m well provided for such an endeavor. Also, I got a 1,400 page veterinary dictionary. It’s pretty badass.

Now the question is whether I should work on a story or on my Plastic recording. The latter is better for my wrists, but now that I’ve started school I really might as well get back to computer-type stuff, right? Or I could go outside into the warmth and work on a story in a notebook….. I must decide! 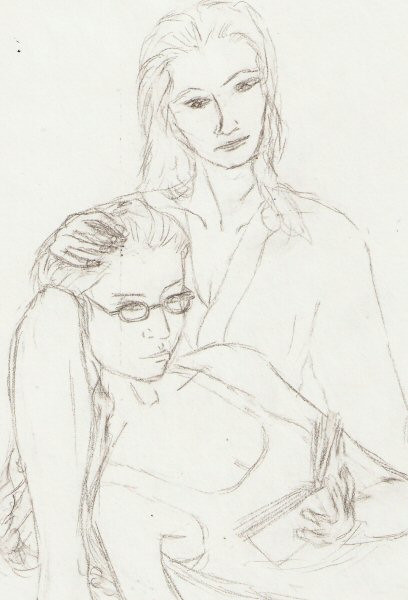 I tell you what: I had to actually sit down and think about this to come up with an answer. I ponder crossovers not infrequently, but I rarely — OK, never — pair up characters from different universes (probably because I usually already have everyone so nicely paired up with someone else from their own universe).

A crossover involving a modern-day Mary Russell in the Sherlock setting is one to which I have given quite a bit of thought, and before I ever (just now) considered pairing Mary with someone, I had already decided that she would be bisexual or lesbian. She’s pretty unequivocably straight in canon (“canon!” hah!), but I don’t really think it would be that difficult to write her as gay. Obviously she cannot marry Sherlock since Sherlock is practically married to John, and lesbianism is far from unprecedented where dear Ms. King’s characters are concerned. And I’ve always thought Mary would make a great lesbian :D

Anyway, it occurred to me when thinking about this question that Irene might well be attracted to Mary for many of the same reasons she’s attracted to Sherlock in the series. I haven’t given this a great deal of thought, but I think their relationship might work out somewhat similarly to Mary’s relationship with Holmes in the books: more of a partnership than a romance, although love does exist beneath the convenience.

Oh, yeah, oh, yeah, and also a dream. I dreamed I was in this place… like, a castle or building I had to make my way through kindof adventure-game-style. But the evil guy that ran the place was more or less all-powerful, and a trickster of sorts, and I got the feeling that in my previous attempts at getting through this place he had totally beaten me at it and done some kind of awful magic.

Well, this time when I got to him, instead of trying to play whatever trickster game he wanted to play, I just pulled his head off. I fed the head to one monster and the body to another monster; I knew that eventually he’d get free of the monsters and join his body parts back together… but by then I and whoever it was I was trying to rescue would be free of the place and wouldn’t need to worry about him.

Then it turned out that all these events had not actually been happening to me, but had been the events in Yahtzee’s new book. I was living in a very small apartment (like, about five feet by five feet), and Yahtzee was living right next door to me. I wanted to tell him how much I’d loved his new book, but he kept asking me to grab things and run errands for him.

So that was a totally coherent dream.