Are we your prey alone? Or are we just a stepping-stone for taking back the throne?

He started the day out by telling us, “I want to know where you guys are. Not, like, you’re sitting here in a chair, but where actually are you?” And then, with no further explanation, he stared at us expectantly.

We stared back blankly. Finally he got frustrated. Not recognizing the problem, he said, “I’m going to have to start calling on people. Tony, where are you?”

Dumbass, still not getting it, says in satisfaction, “See, it’s a question that makes you think! You may not be able to answer right away!”

Then a little later — and this one was my personal favorite for today — he starts going on about how McDonald’s is such a great company because they’re all about education, and they’ll let you do your homework at work.

I was so astonished to hear this come out of the mouth of a… well, a human being, I still don’t even really have words for it. Has he ever, you know, been inside a McDonald’s before? You don’t have to have worked there for seven years to grasp the basic mechanics of the place. They let you do homework at work? In what Bizarro universe?

Anyway, he goes on to add insult to idiocy by saying, “I had a student here a while back who worked at McDonald’s full-time; she would go straight from school to work and stay there until ten or eleven at night. She was complaining that she didn’t have time to get her homework done, but, you know what, I told her, ‘McDonald’s is a great company, and they understand about your schooling, and they’re willing to work with you, and, you know what, they’ll let you do your homework at work, so there’s no excuse for you not to be doing it.'”

(At which point the gaping student undoubtedly threw her hands up and said, “Well, I can see this conversation’s going to go a long way.”)

“That student ended up dropping out of the program,” dumbass continues. “So there’s another 19-year-old working a low-paying job and not getting an education, and she’ll probably be 30 before she figures out what she wants to do with her life.”

Oh, no, not thirty!! Who could imagine figuring out what you want to do in life at that advanced age?? But even if you agree with him on that point, there are several people in the class around (or past) that age that might take some exception to his derogatory tone. But it gets better.

Because he goes on. “And I just knew she was going to get pregnant — and she’s not married — and what does that do for your education? Sets it back even further, right?” Let’s all have a big round of “Fuck you” for the tactful genius, shall we?

Now, on Monday when he was wasting our entire first day not actually teaching, he mentioned that he would never be reading aloud to us in class because we can read on our own time. This, of course, was not true, because he’s an idiot, but it should be true. Every time he has read anything aloud to us, it’s come across rather like a grade-schooler sounding things out.

Now, some people are just not good at reading aloud, and that’s fine. But he doesn’t even understand the structure of the sentences, so the way he reads things makes them come out mostly unintelligible. And when you’re that bad at it, maybe you should stick to your stated resolution of never doing it?

So he told us that we all had to have everyone’s name memorized by sometime next week. Someone asked him challengingly, “Well, do you know all our names?” To which he replied, “Of course I do.” And yet there’s one gal’s name that he consistently mispronounces, despite her having corrected him four or five times and its not being a difficult name to pronounce.

Also? I’m attempting to go by my middle name because my first name is too damn common (and my middle name is awesome). He told me on the first day that he would be glad to call me whatever I preferred, but that I needed to put my legal first and last name on assignments. So I have marked all my assignments with my full name, all three words of it, so he’ll be reminded what I want to be called. Yet he persists in using my first name.

That’s petty, I know. If it weren’t for this other stuff adding up, I wouldn’t even have mentioned it.

So we took this basic math assessment the other day to see where we all were in terms of… basic math. You know, where actually we were. Where are we? Anyway, one question on that test read as follows:

Patient Smith wanted to calculate the number of calories in snack food eaten each day. One beverage contains 120 calories, 3 servings of chips contain 135 calories each, 1 apple contains 90 calories, and a Popsicle contains 112 calories. How many calories has the patient ingested in snack foods alone?

At least one person in the class got kinda hung up on the “beverage,” given that the words “foods eaten” and “in snack foods alone” seem to indicate that the beverage shouldn’t count. There was some debate, too, over whether an apple is “snack food.” I chose to add them both in, because I know the stupid ways of test-writers, so I got it right, but I didn’t think it was unreasonable to consider either a beverage not a food or an apple not a snack food (or both).

When one classmate explained this to the horrible teacher, however, he told her that she was not thinking analytically. He also reprimanded her for thinking that any beverage so called (since apparently if it had meant water, which our bodies need, it would have said so) is not a snack food, or that an apple, something on which alone man cannot live, might not be considered a snack. Also for thinking that any part of any question on any test he gives might have an element of trick to it.

Thereby completely disregarding the facts that THAT WAS VERY SPECIFICALLY ANALYTICAL THINKING YOU FUCKING DICKWAD; that the phrase “food eaten” pretty clearly rules out beverages drunk; that there are very few foods on which man can subsist with no other input, and that doesn’t qualify them all as snack foods; and that the very question in dispute had some trickery with its “3 servings of chips contain 135 calories each.”

Thank fucking Tolkien I only have to put up with this bastard for five more weeks. I hope to Poe the actual vet program teachers are better.

And it’s still better than Alexx.

Anyway, on a less annoying note, I finished that big picture of mine, and I’m pretty pleased with the way it turned out. If I can get a decent photo of it, I’ll post it. It was so much fun working on a big piece like that, I went to Hobby Lobby right away for another big sheet of watercolor paper and started another one immediately. I’ve relaxed a little, since my unemployment funds started coming in, about not buying anything I don’t strictly need.

Of course the problem with having drawn such a large picture is… what the hell do I do with it now it’s done? Draw another one to keep it company, I guess XD

As for writing… At school I’ve been working on a leetle story about my favorites, which may actually get finished and posted in an unprecedented 2012 Saitou and Sano explosion. At home I’ve still been off the computer as much as possible, but that ban is just about lifted, and today I worked on TLY a bit. Plans for the weekend include that and Seeing Red, though I may also format and post the revamped Blood Contingency parts and possibly work on that too.

For tonight, pairing meme! Day 8: A pairing only you seem to like – Katsu and Tokio 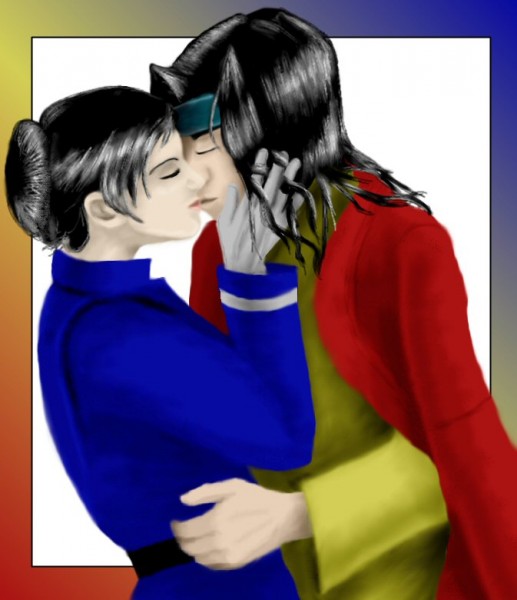 OK, that’s not even true: a number of people have expressed their interest in and support of this couple in ASZz. But I’m pretty sure I’m the only one that’s ever written them. Granted, Tokio being a non-character in canon, this isn’t exactly a pairing that anyone would ever claim to like outside the context of a specific story. Also, really, a setting where Saitou and Sano are together is just about the only time it might logically follow for Saitou’s wife to hook up with Sano’s best friend. BUT STILL. I am the only one that’s written this, as far as I know, and that makes me a MAD pioneer in the field of pairing off people around Saitou and Sano XD

But, seriously, I’m really fond of them together in the story. I think I’ve done a fairly good job of making them an interesting couple and not just a way to get Tokio involved with someone so we don’t all have to feel guilty about her being lonely while her husband makes out with some idiot mercenary he stabbed through the shoulder once. Or even twice NO BAD FAERY NO SPOILERS.

The usual miscellaneous as well as the first October horror movie review!