Since when do peas in a pod do things together? Besides “being in a pod,” I mean

“So tomorrow you’ll all be wearing… what?” (scrubs)

“I didn’t give the tests back yet because tomorrow I want to… what? Go over them, right?”

“Have a good afternoon, and I’ll see you all… what?” (tomorrow)

“It’s called a third degree burn because it’s reached… what? All three layers of the skin, right?”

So you get it. It’s stupid and obnoxious, but not offensive or anything, so whatever. But today, when he was talking along doing this as usual, some of the class was finishing (or attempting to finish) his sentences for them, as usual… when all of a sudden he starts getting annoyed and breaks off what he’s saying to start lecturing the class about trying to talk over him or anticipate what he’s going to say. Which kinda made me go O_o because he’s got the more responsive class members conditioned to do this.

Well, one gal apparently rolled her eyes as he was saying this. Which, yes, sure, that’s rude (and unwise), but I thought it was fairly comprehensible under the circumstances. Oh, but we are not having that, no, sir. “You do not do that,” he says. “You’re never going to make it in the medical field. You don’t roll your eyes at me or any other human being. If this were a job you would be fired. You need to talk to me at break. You have to learn courtesy. I know more about this field than you all ever will, and I’m telling you right now, you don’t do that.”

So we’re all kinda wincing for this gal, even moreso when, at break time, he takes her out into the hall and off in the direction of the teacher’s lounge. As soon as he’s gone we all start badmouthing him, since the entire class kinda hates him. CNA’s and people with tongue piercings especially aren’t terribly pleased with him.

AND THEN AN HOUR PASSES.

Our breaks are supposed to be twenty minutes long, but we had a triple-length break because he was so busy chewing this poor girl out for rolling her eyes at him. And we’re all sitting there making fun of him with increasing hilarity, and some of us are grumbling that, if we’d known we were going to have a break this long, we could have done XYZ, and we’re all a little concerned about the student that’s getting her ass chewed because she’s clearly the fragile type and we’re worried she’ll come back in tears.

Eventually (you know… after an hour) she did come back, and as dumbass did not immediately return we were able to comfort her and make fun of him a little more. What horrible people we all are XD XD Anyway, then he came back in, and (to his professional credit, I suppose) pretended rather expertly that nothing unusual had happened.

But it’s good to know that he knows more about the medical field (and, given the composition of the class, this includes medical assisting, dental assisting, and veterinary assisting) than ALL OF US COMBINED WILL EVAR KNOWWWWWWWW.

Other than that (which, admittedly, did have its entertainment value), today has been quite good. I finished my art exchange piece and got some good work done on Seeing Red, and now I am playing with my Plastic recording ^__^

And now time for pairing meme. Day 10: Ship that became canon even though you didn’t expect it to – Rumplestiltskin and Belle 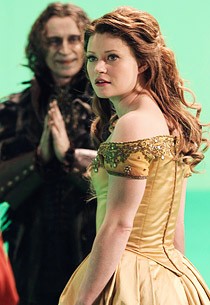 Admittedly by “didn’t expect it to” I kinda mean “just didn’t really expect this at all,” but still. That episode was by far the best of the entire only-intermittently-good first season. I thought that, even in the extremely rushed (as usual) scenario set up in the episode, they had good chemistry and believable progression; but I especially liked what the experience did for the character of Rumplestiltskin. The business with his son later continued that process, but Belle’s involvement with him really started making him into a far more interesting and relatable character.

Of course we’d liked him all along because he was the best actor in that mish-mosh, but we’d liked him as a villain… by the end, largely because of Belle (and Bael… ooh, nice parallel in naming, there), he’s transitioned from uncertain villain to sympathetic villain to anti-hero, and it’s been a fun path to follow. Also, Belle’s sweet little face *__*