I died; then my instinct was born

Gaiz, I think I’ve found a new hobby. Because, y’know, I needed another one. I’ve never done much recording of my own stories before, because I was always like, But then when I edit the story again, the recording will be outdaaated *whine whine whine*… but the recording and editing themselves are proving to be so much fun that re-recording something when I’ve edited it isn’t seeming like all that unpleasant a task.

Yeah. I’ve been enjoying doing Plastic so much that I’ve been dreamily planning on recording everything, which is… a significant undertaking. Plastic is up to 47 parts complete, so it’s not even half done yet… and today while I was editing parts I’d already recorded, I was suddenly like, Ooh, poetry, and went and recorded all the poems I felt like recording (which was 34 of them).

So I guess we’ll see what comes of this XD

OK, what else did I have to say? His Face has been fairly tolerable for the last couple of days: still stupid, but nothing has stood out. At school today, though, a pregnant gal in the class left to go to the emergency room because she’d suddenly started bleeding copiously… and I won’t know how she is until Monday.

I swear there was something specific and (relatively) interesting I wanted to document. But now I can’t remember it to save my life. I guess all that recording drove it from my head. Ah, well, I’ll probably remember eventually.

First there was this really dreadful dream in which I was on an airplane where a terrorist appeared. I was trying to get into a good position to stop the guy, but he saw me and shot me in the face. So I backtracked/loaded my game/whatever so that wouldn’t happen. But then he captured me and forced me to be his servant. He made me do horrible things, and he had my siblings and their children (they all had children) around to ensure my compliance. Aargh, it was awful. I’m not even going to say what-all happened, because it was terrible.

Then in another dream, not much of a step up from the previous, I worked at McDonald’s -__- This was actually a McDonald’s dream far less miserable than usual, though. I was doing single-booth drive-thru, and this gal a bit younger than me came to the speaker and told me she wanted a smoothie to comfort herself because her husband had just been deployed. Since, in the dream, I’d just been rehired and we hadn’t had smoothies the last time I’d worked there, I had to hunt for the button to ring this up.

When I pushed the button I found, however, and totaled the order, it came to, like, $7.35 or something, and I was like, the hell is that price. So I told the customer to pull up to the last window and I’d have a real total for her there. Then I went to ask the manager why we had a button for a smoothie that cost seven dollars. He and another employee, intending in a dreamlike step away from reality to help me in my single-booth endeavor, had started preparing the smoothie — and I saw why it cost so much: the cup was approximately four feet tall.

I went back to the window to talk to the customer, to explain that the smoothie I’d rung up was freaking enormous and expensive, and see if she wanted a smaller one… but just then the co-worker that had been helping the manager brought the smoothie over to the window. When the customer saw it, she started crying for joy because it was so silly and big.

My dreams are usually more conceptual than visual, but I had an unusually clear and detailed image of this customer. And the manager was definitely Cableman Jorge. The End.

And now it is time for pairing meme. Day 12: Character you don’t like seeing paired with anyone else – Oops, it’s Saitou and Sano again 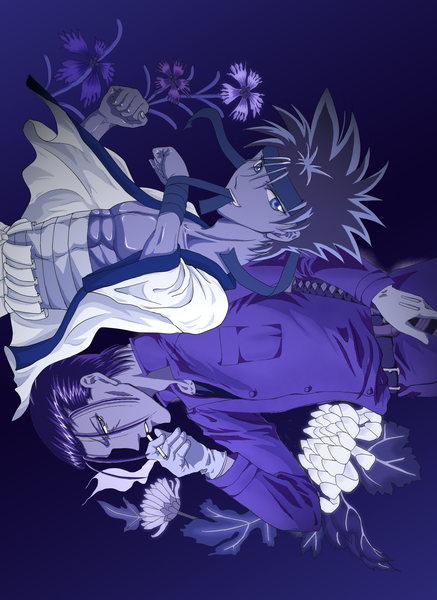 (Picked up this fanart from a Japanese Pixiv gallery. It’s probably better that I can’t positively identify the artist, lest I try to chain them up and make them keep drawing this kind of thing for me forever)

We knew they’d be back. Here’s the thing, though: I don’t actually mind seeing either of them paired with someone else (and, as a matter of fact, adore Saitou so Poe-damned much that I often actively seek it out or even write it) — as long as the other one’s not around. It’s just too fucking depressing to see them near each other but not together. It’s gotten to the point where if one of them is in a different pairing, I almost can’t bear to have the other one mentioned. This makes stories like Majime ni Ikite difficult to write; and One Nightfall, though it was some years ago and therefore earlier into this phenomenon, was well nigh impossible.

I suspect that I’m eventually going to develop this same tic about Quatre and Trowa and probably Heero and Duo as well, but I’m not quite there yet; I can still read off-pairing stories about those guys with a minimal amount of discomfort.