The gods are not so much worshiped as blamed

School was pretty decent today, but I’m braced for tomorrow since we’ll be back into the “study skills” portion of this idiotic class and talking about His Face’s favorite subject, ~diversity~

I am happy to report, though, that the pregnant classmate is doing fine.

So I haven’t mentioned this website project yet. My mom’s redoing her entire website again, and since that’s, like, twelve million pages, it’s a huge freaking task. She told me if I help her with it she’ll buy me a new computer. And since my computer is going on nine years old or so, and just not functioning very well these days, I jumped right on that.

The problem is (and this was also always the case back when I had my own site) that website work is the worst type of movements for my hands and carpal tunnels. Actually mom had mentioned my helping her with this back during that week or two I spent trying to avoid the computer, and at that time I was like O___O NO.

Now, when I’m supposedly back to normal, after doing only about fifty pages (not all in one day, of course), I’m in wretched pain again. That’s only about a third of the alphabetical list, which is what I’m primarily helping with, and I need to keep working on it because COMPUTER… but I’m afraid I’m going to have to prescribe a break again at this rate :/

Today, when it started hurting too much, I decided to work on Plastic recording instead. A lot of the same painful movements are involved in editing the sound files, but the actual recording, of course, is just voice, so that was a good way to rest the extremities.

Gaiz, I read twenty-five parts. I have raw recordings up to part seventy-some now. I kept saying to myself, “OK, I need to stop; I’m getting really hoarse…” but then I’d be like, “Ooh, this part; I love this part!” Eventually I forced myself to stop after my favorite part of the entire story, which I really shouldn’t have recorded at the very tail-end of my voice XD

But then I couldn’t edit more than one part because of aforementioned stupids, and that was sad. I’m still having a million fun reading things aloud, though. Definitely something I’m going to keep on doing for a while.

OK, I’ve got to get to bed. Pairing meme and that’s the end. Day 14: Couple you liked even though you knew it would end up badly – Mako and Asami 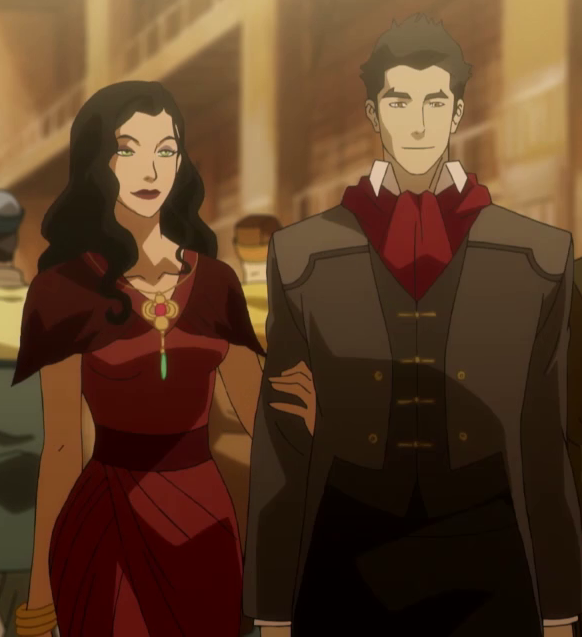 I tell you what: the next season had damn well better make up for what Asami suffered in the first season. She’s such a freaking badass and I love her to pieces… for a few moments I had hope that she and Mako would actually stay together, too, but then it became clear after not too long that it was not to be. And I don’t necessarily dislike Mako and Korra… but I think Mako and Asami were a slightly more mature couple, and also that (as I mentioned) the character of Asami deserved a really good outcome. Now, though, I’m hoping she’ll hook up with Iroh. Oh, Iroh. You have no idea how loudly I screamed and how wildly I gestured at the screen when you first spoke.

P.S. I need an “in pain” icon. “Dead” tends to have different implications, but I guess I’ll use it anyway for now. Soon I must turn my thoughts to this, however.