You will all be pleased to know that I survived the night without any arachnoid encounters (that I was aware of), though my sleep was every bit as bad as I’d predicted XD Tonight should be better.

It hasn’t been the most productivest day evar as I planned it would be, but it has been quite productive. I didn’t do any work on mom’s website, nor study at all, but I did do some serious brainstorming on one story; I determined order, inclusion, and format, and then got about six pages written.

So in case I haven’t mentioned it yet, His Own Humanity is the official series title for the Plastic universe. And since it’s been a while since I’ve given a status report there, let’s have one. Actually, let’s break everything right down.

Seeing Red, which is chronologically the first story (excluding the Plastic prologue), is almost a quarter finished. This is a chaptered story about Saitou and Sano and ghosties. It’s not nearly as long as Plastic, and once I’ve got it about half done I’ll probably start posting it.

Between Plastic and the next long story, there are four short stories: one about Saitou and Sano, which I have not started yet since I won’t have the specific nuances of their relationship established until further along in Seeing Red; a Trowa and Quatre story to show where they’re at after the curse, which is about half-finished and has been giving me some trouble; Reciprocity, which of course was posted a little out of sequence; and then the one I was working on today, which is about all four of our Gundam boiz. All three of these unfinished short stories are untitled as yet.

After that, the next long story — aw, hell, y’all might as well have the title: La Confrérie de la Lune Révéré — will be primarily focused on those numbered boys but will also feature Saitou and Sano. I don’t really have a specific length estimate for it yet, but by “long” I mean “in the Plastic ballpark.” If you think I was finished tormenting Trowa everyone after Plastic, you are wwwrrroonnnnggg. I’ve only written a couple of parts of this one so far.

Though Saitou and Sano are important to the Confrérie story, they’re still more like cameos and won’t have any POV… so the important events that take place in relation to them during that time will get their own story, set right in the middle of Confrérie, called Guest Room Soap Opera, which is not started yet for the same reasons as before. Guess whose guest room! Get a gold star!

And after Confrérie, there is currently only one more story planned: a short chaptered one called Re:Talking Doll? that will give us our first look into the head of this universe’s Wufei. I mean, he’ll be around all through Confrérie, but he’ll get his first POV here. How neglected he is! I’ve actually already made some significant progress on this story because I was excited to write Nerdfei; but I kinda have to wait until after Confrérie for a lot of it because (once again) relationship nuances, and this time also Heero’s level of magical development, will be greatly affected by how Confrérie goes.

I have a lot of future details in the lives of these characters planned out after that point, but unless those events resolve themselves into actual stories, Re:Talking Doll? is the current anticipated chronological end of the series.

So… yeah… good progress on one of those today. I shall pat myself on the back.

By the way! My birthday is two weeks from tomorrow! ^__^!

Now it’s time for me to go to bed and maybe sleep properly. But first! Pairing meme. Day 18: Most annoying character that tried to come between a ship – Tomoe Sakura 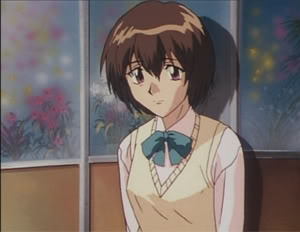 With more emphasis on the “most annoying character” than the “ship” part of this question, because, honestly, I don’t give a crap whom Ran is paired with as long as it’s not Sakura. “Oh, I just want my kidney back!” she shrieks. Holy fuck, she’s so annoying. I’m not even really much of a character-hater, but this girl just… just… ugh. Her best moment in the series was being controlled by Schuldig. MmmmSchuldig.