Two hearts born to run — who’ll be the lonely one?

Today’s gem from Dipshit McFuckerface: “Tubal ligation is a lot easier to do right after a baby’s been delivered, so a lot of women, when they want that procedure done, will ask for it right after labor. But then you’ll get some woman who’s only 25 and already has five kids, and she’ll ask for it, and her doctor will refuse. Because she’s obviously already made a lot of poor choices — she’s only 25 and she’s got five kids! — and she might want to get married someday and have more kids.”

I don’t even. I just. Don’t even. Guy should go into politics; he’d fit right in with some recent stars.

I MEAN WHAT THE FUCK WAS THAT. WHERE CAN YOU EVEN START.

You don’t start, is where. Only four more days of this bigoted moron; I can undoubtedly survive that long.

And only six days until my birthday! The best birthday present ever will be not having to deal with that guy anymore.

Today as I was pulling out of the driveway to go to school, there was a soOoOo cute black squirrel right next to me ^___^ But now I think it is time for me to work on mom site stuff and daydream about a new computer.

Pairing meme. Day 23: Couple you only shipped after a long time – Kaoru and Megumi 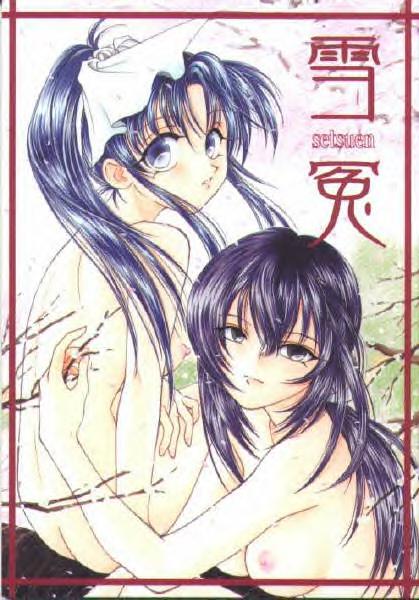 (Pictures of Kaoru and Megumi being lovey together were as difficult to find as Relena and Dorothy. You’d think teh lesbian had never occurred to people or something. EDIT: OK, that’s… not actually Megumi at all; way to fail, faery.)

“Anyone and Megumi” would be equally accurate, because the fact is that I didn’t like Megumi for the longest time. And even once I got over whatever issues I used to have with her, this couple was still a sort of throwaway getting-Kaoru-and-Megumi-out-of-the-way-in-one-fell-swoop sort of pairing.

But eventually I came to adore these ladies together, for a number of reasons. First, I can totally picture Megumi as being very romantic, and I mean romantic in that subtle but extremely sexy, sweep-Kaoru-off-her-feet sort of way… setting up unexpected romantic scenarios, saying lethally romantic and sexy things (especially quietly, in Kaoru’s ear, at inappropriate moments), giving her unexpected little presents… and Kaoru is just the type to be… well, to be swept right off her feet by that. Megumi comes across, to me, as the one that would play the older-and-wiser role to the hilt and just blow Kaoru’s mind on a regular basis.

Meanwhile, Kaoru has proven that she is the very essence of support and stability for someone that needs it, and I think Megumi, both emotionally because of her past and practically because of her chosen profession, definitely needs it. Also, I think both of them are going to turn out to be unexpectedly good at sex, and will very much enjoy figuring out lesbianism together :D

EDIT rather than making a whole nother entry: I have about 23 mom site pages left. SO CLOSE. I may be able to finish that entirely tomorrow. After that I need to glance over several files on the new site and edit their tags, and then give mom a list of stuff she needs to take a look at… after which I’ll need to make whatever amendments she dictates based on that list. But seriously? SO CLOSE.

Also, ZG got her visa at last. So after not too long she’ll really be gone T__T END EDIT.