Man, after watching the prickling embarrassment that was the Bell Here Are Some Words That I Know Bowl yesterday, it’s so nice to sit down and see the Broncos not suck. I support the Air Force Falcons because they’re local and put on an amazing show at home games… not, unfortunately, because they’re usually terribly good. But with Peyton, the Broncos are unstoppable! That’s a good feeling.

You know one thing I love about football? The absurdly specific records that get set every week. “Most rushing yards in a lost game.” Heh. OH MAN WHAT IF THEY BECOME UNDEFEATED NEXT YEAR *__*

I’m vera happy today ^__^ Not just because my Broncs are great! Today is back to week 1, so hormones are returning to normal. And I got to talk to Zombie Girl yesterday, which cannot but fill me with joy! And tomorrow is New Year’s Eve! I love New Year’s Eve! Also I have a constant reminder of what’s on my back, the discomfort proportional to the glee it gives me.

So this tattoo artist is the husband of my manager at EA, and because of this I got a massive discount; I paid less than half as much for this new one on the right as I did for its match on the left. Not only that, but he took about a third as long, and knew at a glance which blue he needed to use to match the others. So awesome. The black outline part always hurts the most, I find. I kinda texted people all through the process of this one, and that was nicely distracting. And it was so quick! How cool is that. 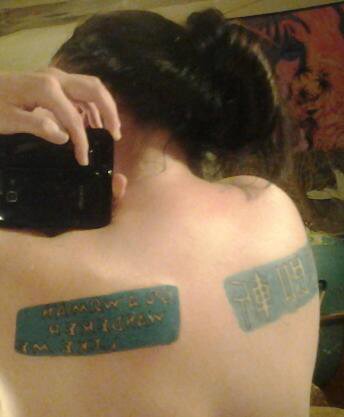 I kinda couldn’t be arsed to get better pictures.

This being the first day of the countdown to school picking up again, I’m trying to work on all the school crap I need to get done before next Monday. So far I’ve managed to… finish another story recording and… level my pandaren monk a few times along with several of her pets. Yeah. Texas longhorn kine are, as far as cows go, relatively interesting, but still not exactly as dynamically engrossing as quite a few other things I have the opportunity to think about.