Forecast to be falling yesterday; only in the past is what they say

My long break has ended, and I have started four online classes. So far they’re all pretty stupid, but as soon as we get into real assignments that should change for at least some of them; I have little hope for the “Communications” course that literally has an assignment later called “Parts of Speech,” but the bio/chem class shouldn’t be too bad, I think.

Did I get everything done that I wanted to over the break? Let’s take a look at the list I made near the beginning of my time off and see what kind of productivity I have achieved.

Fast Decisions — Yep. And even taking this to mean HoH as a whole, I have made good progress. Cross-Cancellation still isn’t done, ’tis true, but it’s gotten really close. I will take a look at it after this entry, in fact.

TLY — oops. I haven’t actually opened this at all. Maybe this is what I should take a look at after this entry. It’s true, you know… what they say about art in a vacuum…

All the recordings in the world — Since I started out the break with worse-than-usual congestion, this (and Lellom Srab) kinda got shuffled into the background. I edited all my shorter one-shots about Saitou and Sano (and I will get to the longer ones pretty soon), and recorded a few of those, though.

A big picture — I actually started this, but I haven’t quite finished the line art. Once the weather gets warmer and I am more inclined to sit outside, this will become a more interesting thing. It has grown quite lovely even lately, but not quite hot enough yet. It’s alllmmoost tank top time, and I’m excited, since nobody has yet seen the tattoo I got in December.

Vacuum my room — one time! It surely would have been more than that (she said with forlorn dishonesty) if Enishi hadn’t died. And by that I am referring to my vacuum named Enishi, not Seeing Red.

OK, so I feel like I’ve been fairly productive over the break. Other stuff I have accomplished that wasn’t on the list was getting half an ASZz chapter written and, as of last night, two minutes of an awesome music video put together.

Last week was another Doom Week at EA on account of Mother’s Day. Sunday itself wasn’t as order-heavy as Valentine’s Day, and I wasn’t at an internship at the same time, so the whole week wasn’t as horrible as Valentine’s Day week, but it was still pretty intense. I have two more shifts before my ten work days in a row will end and I will have a day off.

So I dreamed at one point that I was romantically involved with Mr. Gold. He had to disguise himself for some purpose or other, but instead of using magic he went into this place and came back with an actual disguise. I’m not entirely sure what it was, but it was so painfully dorky that I closed my eyes and pretended to sleep rather than acknowledge him.

I also dreamed that Zombie Girl came to visit! That was great.

OK, have some pictures of my cat. The guest bed had to be moved upstairs for a recent guest time, and for a while the mattress was leaning against the kitchen counter. This is what cat invariably does with vertical mattresses. 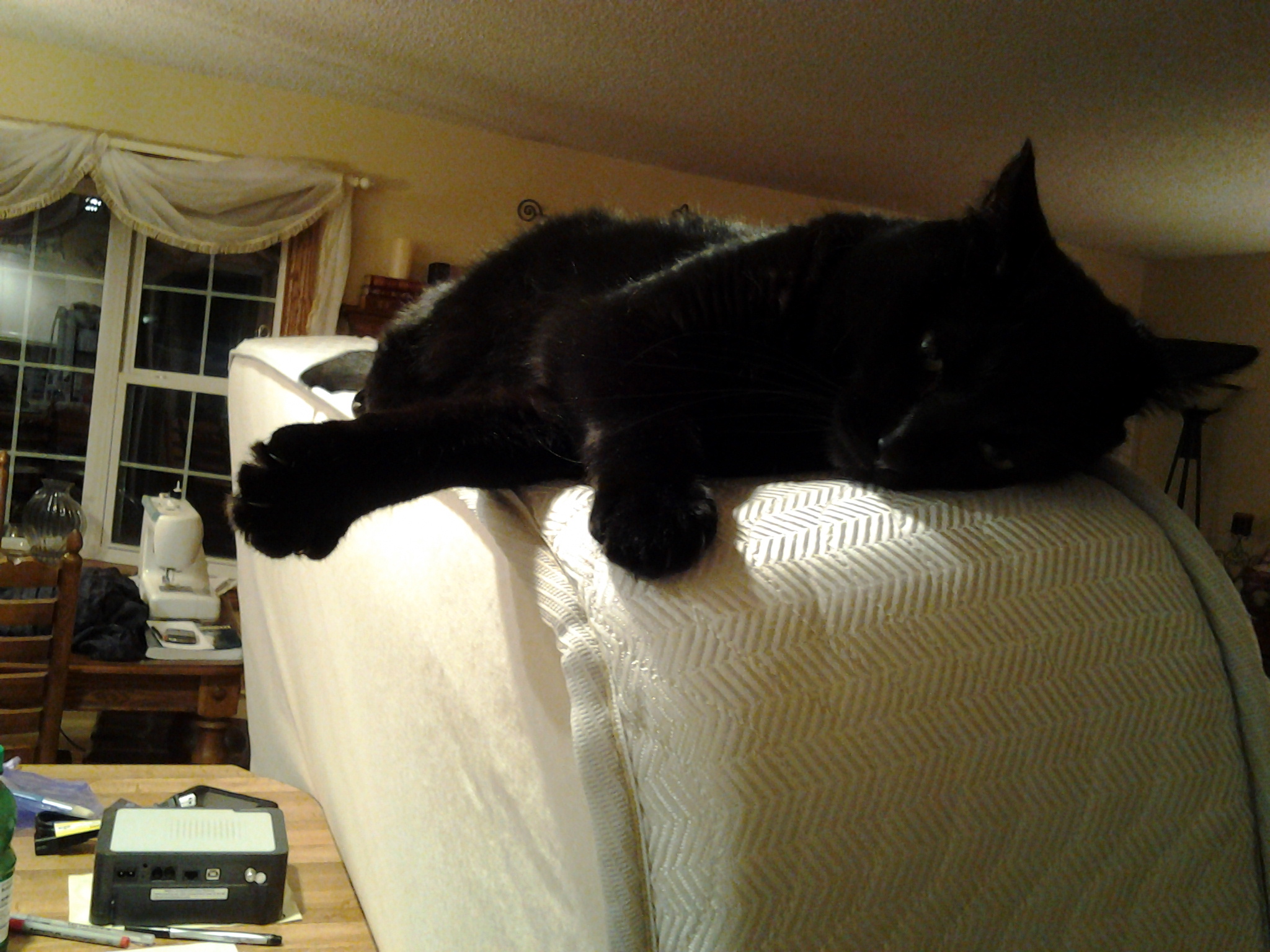 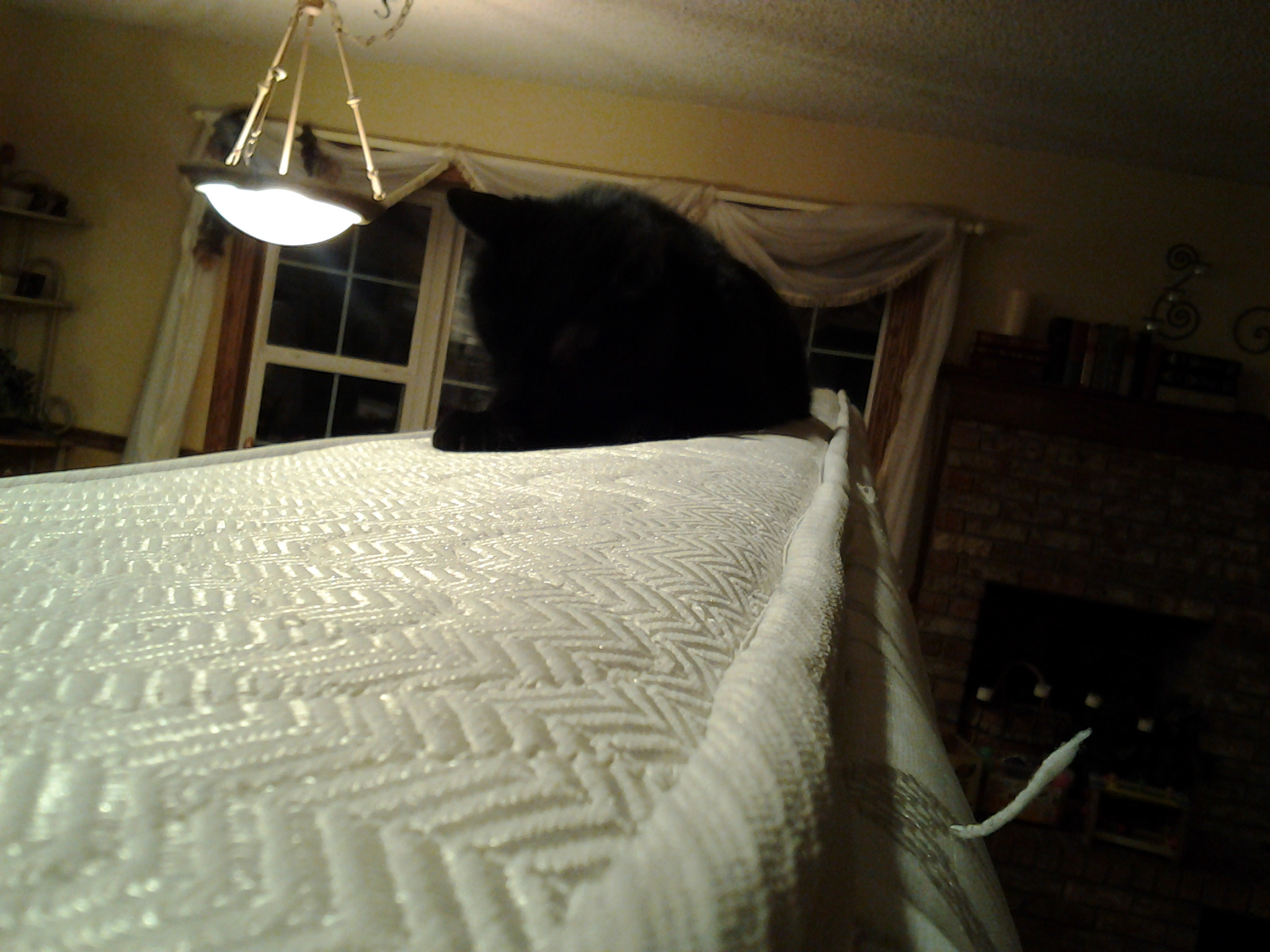 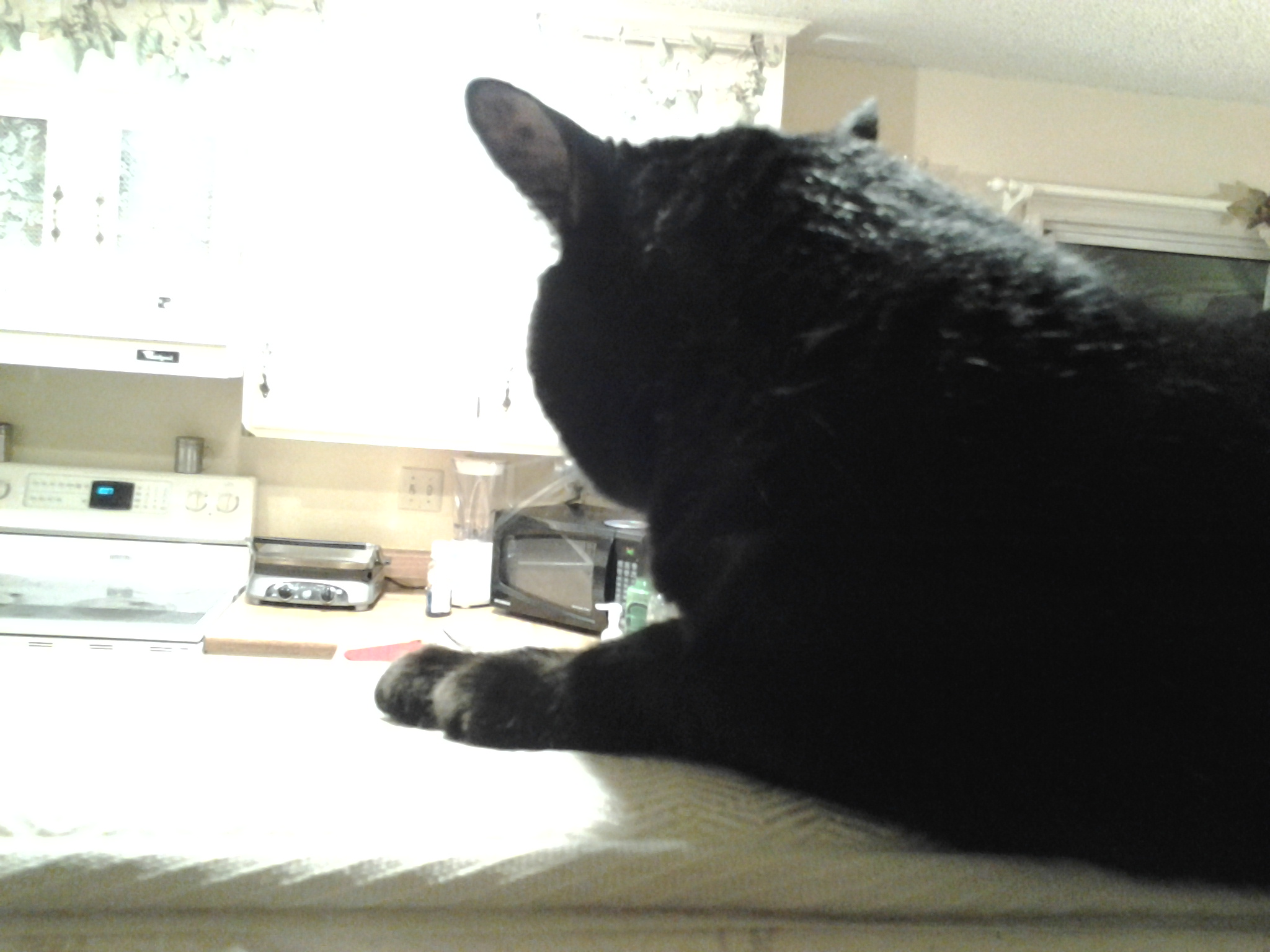 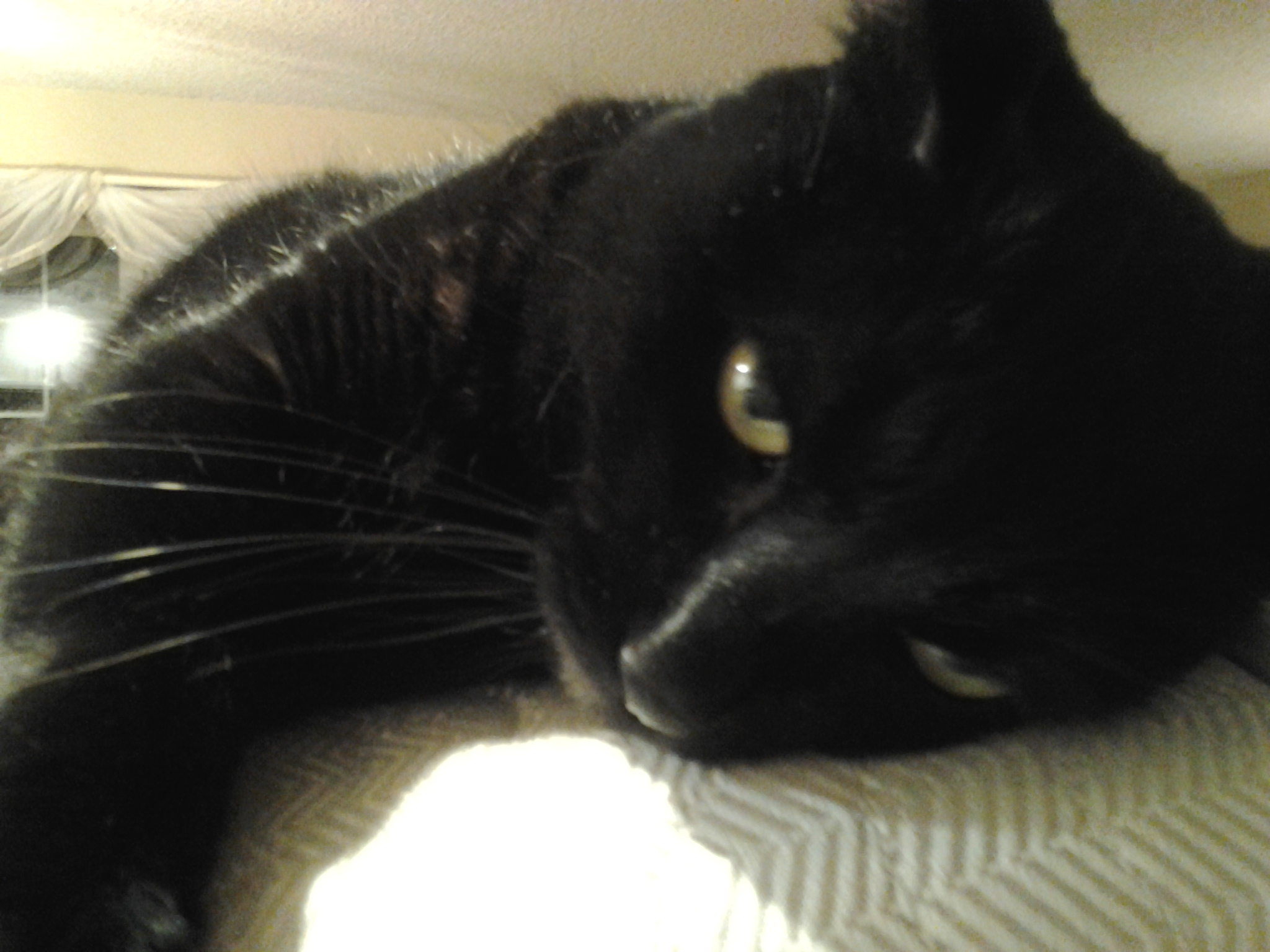 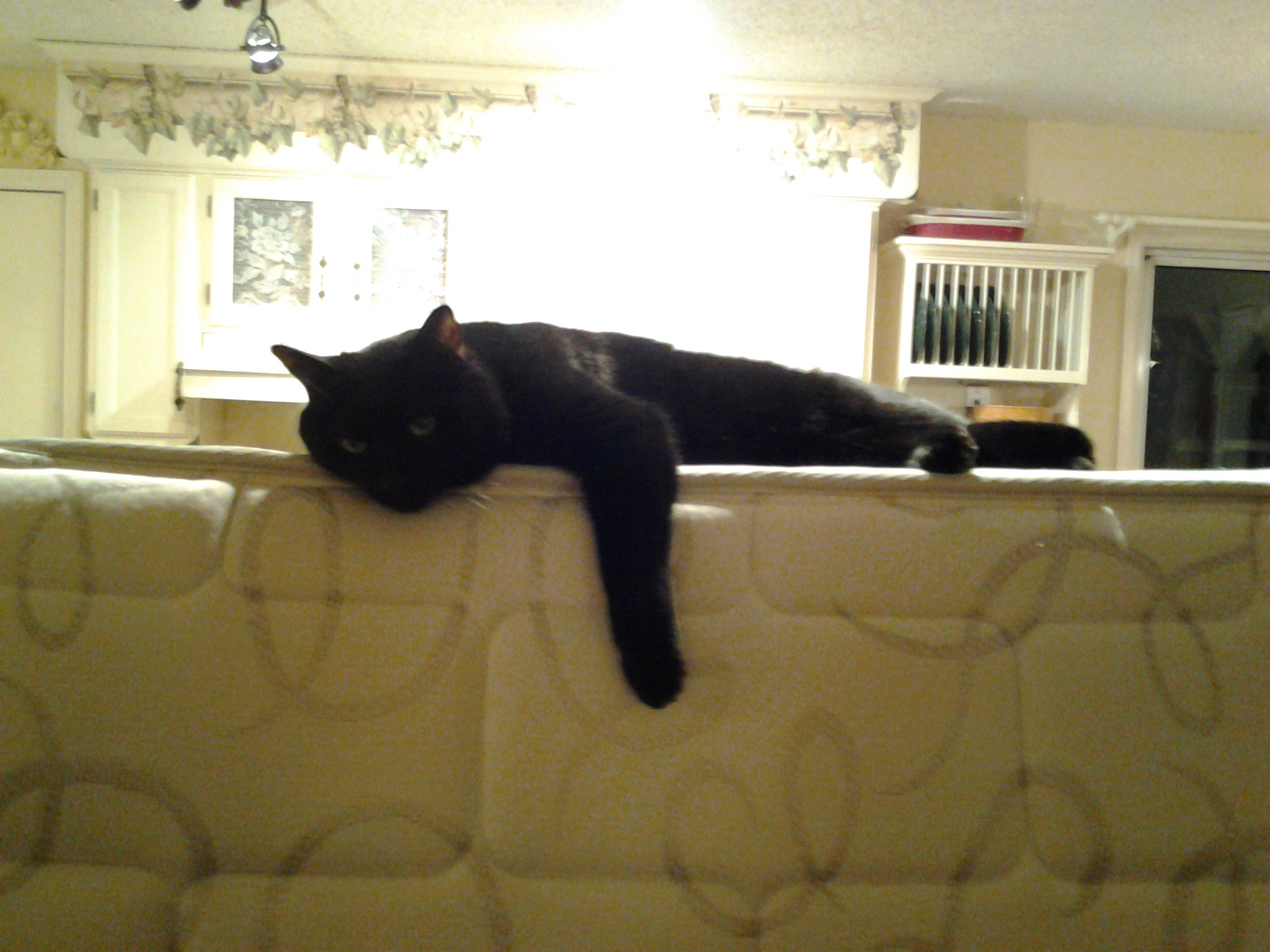