With these guys manning the field, I’ve got a notion today’s going to be a holiday

I saw snowflakes on Friday night! It must be October. That’s not nearly as exciting as the sneaky Peyton touchdown I saw today, though :D :D :D

Family members were around all week, and that was pretty fun. I got to play with nephew and niece a lot, and once we went to Chuck E. Cheese’s. Poor waybee was extremely unhappy about it, though; she doesn’t like childs. She spent most of the week hiding under my bed, poor thing.

One time, sweet cat was sneeping under the blanket as she sometimes does, and Lyric came in. She wanted to sit on the bed, but was having a hard time climbing up onto it, and only managed to pull the blanket further and further down. Presently waybee became exposed, and I have never seen such a panicky, horrified expression on an animal’s face before. She started backing away trying to get under the blanket again. It was extremely funny and cute and sad. She’s very happy that the childs have gone elsewhere.

Wednesday, when I came home from work, my father said to me, “Do you want to go meet your mother and brother and sister and brother-in-law and nephew and niece at Chick-fil-A?” Now, I don’t spend money at Chick-fil-A on account of ideological conflict, but since I have issues saying no to free food or the opportunity to eat a meal with family, I agreed to go.

On the way there, we rather casually discussed this, and my father remarked that every time he’s been to a CfA he’s noticed that all the employees seem to be the kind of fresh-faced, clean-cut youth he associates with church-going. He did not mean this in a negative way, but in agreeing with him I couldn’t restrain a shudder. I won’t deny that I have some prejudices XD

Inside the restaurant, I actually felt a little awkward. Could they tell that I’m gay? Did I look bad for patronizing their establishment? The employees appeared exactly as my dad and I had discussed, and that didn’t help. In any case, we got tired of waiting for our peoples to show up and decided to order our stuff already. When our combined order turned out to cost exactly $15.00, I wondered what the chances were of such a total.

Says the young man taking the order, “Yeah, it works out like that sometimes.” He looks at me and adds, “Actually, your meal with the lemonade came to $6.66.”

And would you believe that this automatically made me feel better? Though I’ve had some GI sensitivity ever since I ate the food there…

I have a terrible weakness for little figures. In my current living circumstances, most of my dear little figures remain boxed up, and I have no place to put new ones… but I still buy them. Before the nephew and niece appeared, Lesta and I visited Wal-Mart’s toy section to pick up a few things, and discovered this huge selection of really nice-looking and well detailed animal figures. I could seriously have bought one of each; they were so sweet. But I restrained myself to the two I liked best, which you can see here: 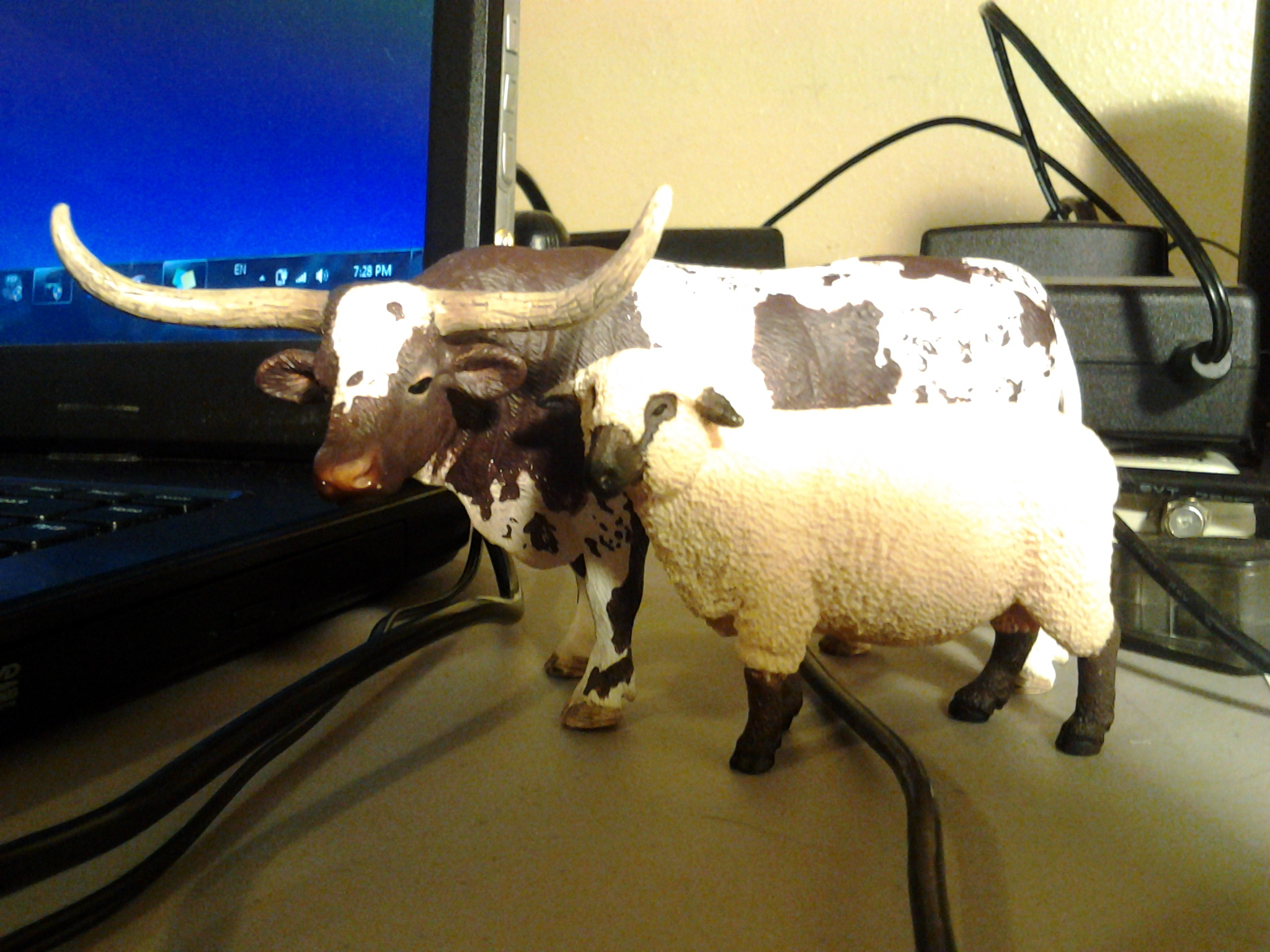 I have named the Shropshire Hettie, but I haven’t decided on a name for the longhorn yet. Aren’t they amazing, though?? I love them so much. Probably just as much as I love my other new figures: 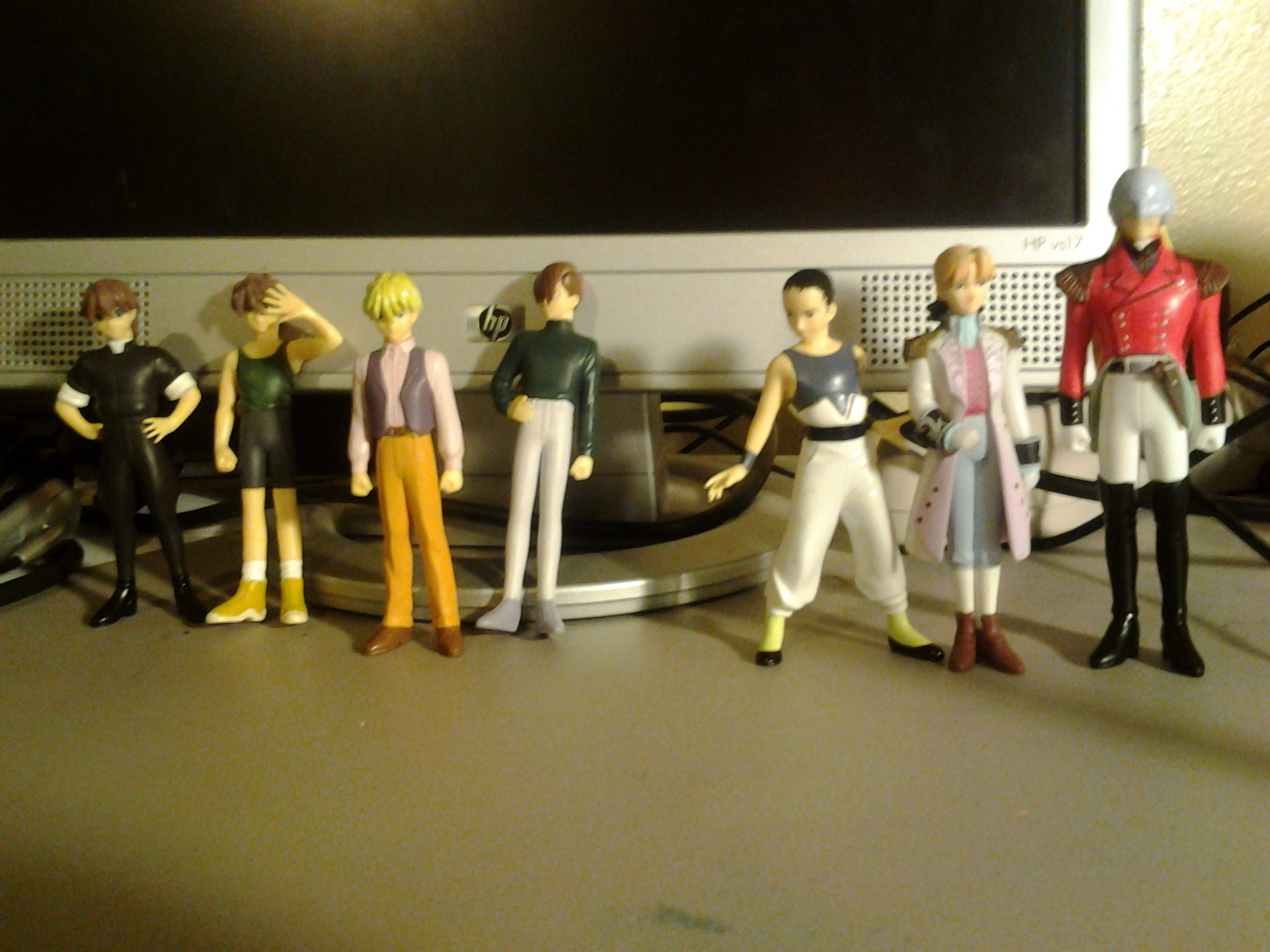 Earlier, cat very kindly put Relena and Wufei on the floor together. Cat often does this.

Only then, everywhere we went, there were people around that we couldn’t get to go away, so we couldn’t enact the new transformation without giving away our true identities. (In real life, I haven’t actually watched enough of that show to know whether or not that’s a problem, but obviously my subconscious assumed that it was.) So we decided to go back to my house, where we were going later for a party anyway. But then the power went out, which was apparently yet another barrier to our new transformation. This was a silly dream.

Well, today has been a very productive day. I wrote very successfully, and the Broncos remained undefeated with some effort. I even finished my stupid homework. Here’s looking forward to a good week!