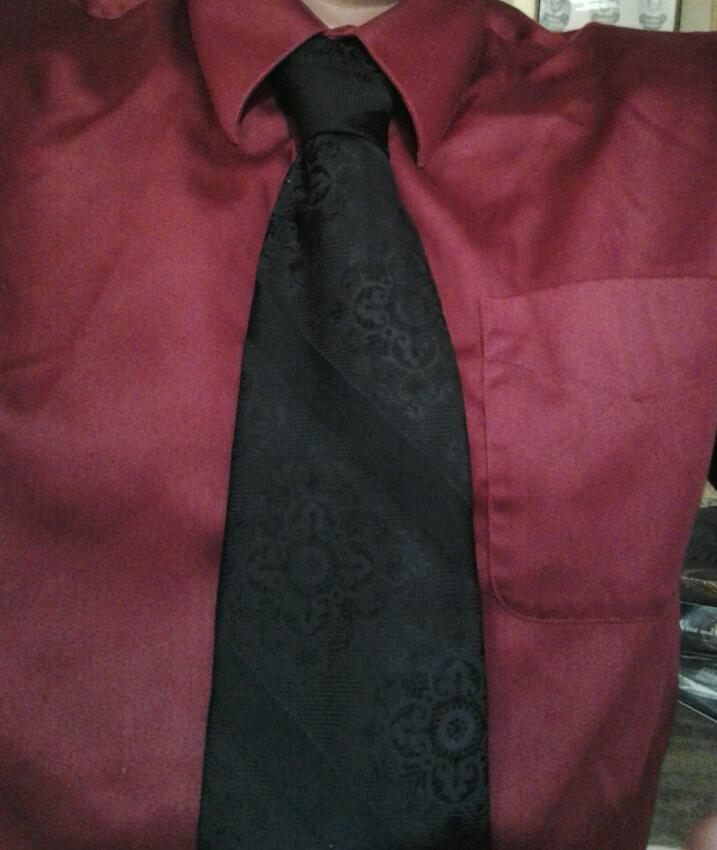 This is only the sixth tie, but it’s probably the last for this break. As I mentioned, I often don’t get dressed at all on Sundays, and Sunday is my final day of no school and no work. But it’s been a good run. I am satisfied.

Today I cleaned the hell out of my room. I even hung up all my clean laundry for the first time in… I forget. I kinda didn’t expect I’d actually get around to cleaning my room during this break, but, lo! it really happened! After that I touched up my hair dye and then mostly messed around and played video games for the rest of the day.

So in 2013 I saw four theater movies. If I remember correctly, that’s twice as many as 2012. They were The Wolverine, Frozen, and two so-called hobbit movies. One of these four was even good; I’ll let you guess which. My dad’s parents continue the tradition of sending us movie theater gift cards for Christmas, and then we have to find movies to go see with them. I guess if the recipient never actually tells you a present is unwelcome, you might as well keep giving it year after year…

Wow, I think I’m caught up! I’m pretty sure that’s everything I needed to talk about! Oh, except for a couple of dreams. In one, I sat down in a new class at a school I was just starting to attend, and found that to my left was seated Hugh Laurie and on my right Nathan Fillion. What class was it? Who can say? An awesome class.

In another dream (kinda like the BSSM soundtrack!), I was at work dipping some bananas or apples. Then my manager sent me out to get something. I was driving Zombie Girl’s parents’ truck, for some reason, and I went to the mall. There, I met a lady that had a cria. She was carrying it to some other part of the mall because she was looking for a drill. I FOLLOWED BECAUSE CRIA. I was about to tell her that I had a drill she could use, but I realized just in time that it wasn’t actually my drill — it belonged to ZG’s parents — and I shouldn’t be offering its use to random camelid aficionados without talking to its owners first.