Don’t want to be a richer man

Well, “done” is a slight misnomer. Internship starts on Monday, and there’s some dumbass online class I have to do during that, which I never heard of until yesterday. But I’m done with going up to the school and sitting in class or working in lab every day.

The last eight weeks — and most particularly the last three — have been disgustingly busy and hectic, and I’ve been routinely exhausted about about ready to cry, but it’s all finally over. The funny thing is, I thought Valentine’s Day week was going to be the worst because I would have to deal with working every day after school for the incredibly busy holiday and trying to find some time in the middle of that to get my homework done… but these last two weeks have actually been worse. But guess what! It’s over!!

In recent days I have given intramuscular injections to a fractious horse, performed cystocentesis on an obese pitbull, managed not to get bitten by a large turtle reluctant to have its head held, manually retracted the opening of a cat’s abdominal cavity while the doctor rooted around inside, demonstrated to frightened classmates that the corn snake would not bite even when a hand was held steadily and invitingly in front of its mouth, and I know not what else. It’s been pretty badass.

Hoping to work with sheep and goats and camelids and such, I requested a large animal practice for my internship, but they were not able to find one for me. Because they kept looking for so long, there was a significant delay in finding me a site at all; in fact it only happened yesterday. It seems like a very nice clinic, but I guess I’ll find out for sure starting Monday morning! And I don’t know that the next six weeks won’t be just as busy and stressful as the last eight, but we can only wait and find out. At the very least, I’ll have most evenings free, which, of course, allows for writing time as long as I’m not too miserably tired to think straight XD

Speaking of writing, I’m really quite proud of myself for keeping up with Confrérie lately. I couldn’t have done it if I hadn’t been able to write during lectures at school. As such, it’s been editing time that’s been scarce, which is why the most recent few parts (and potentially this coming Sunday’s) have perhaps been a little less polished than I’d like. Fortunately, things can be edited into eternity, and I will eventually be satisfied.

During this time, I got a new phone, and it is best phone. Because I’ve been so damn busy, it took me, like, three weeks to do all the new-phone-playing that one usually gets done on the first night of owning a new phone, but I’m no less convinced, for that, that this new phone is best phone. And one of the most important things to do with a new mainstream model phone for which people actually design accessories is to GET ACCESSORIES FOR IT. So take a look at the two custom cases I ordered: 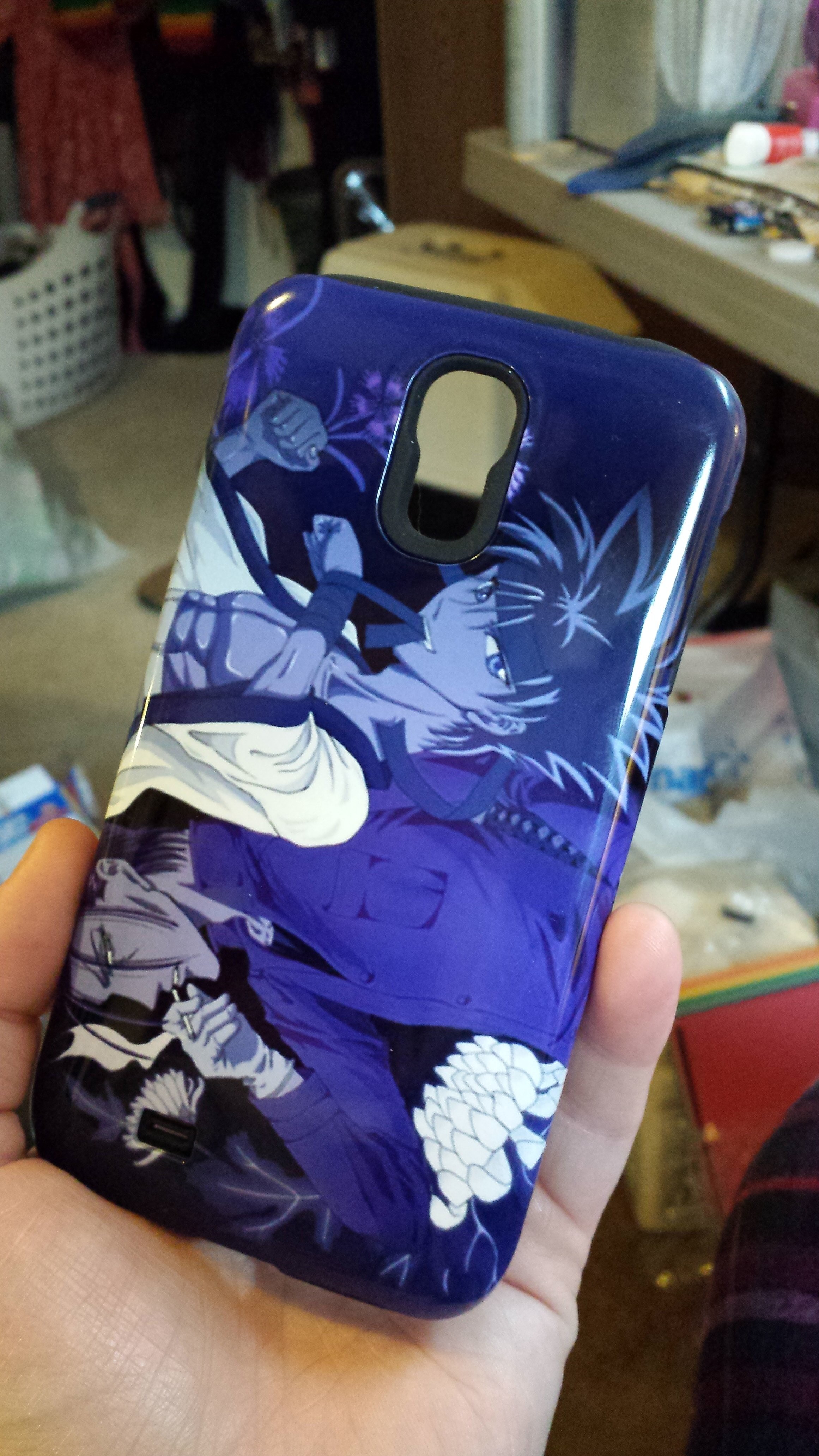 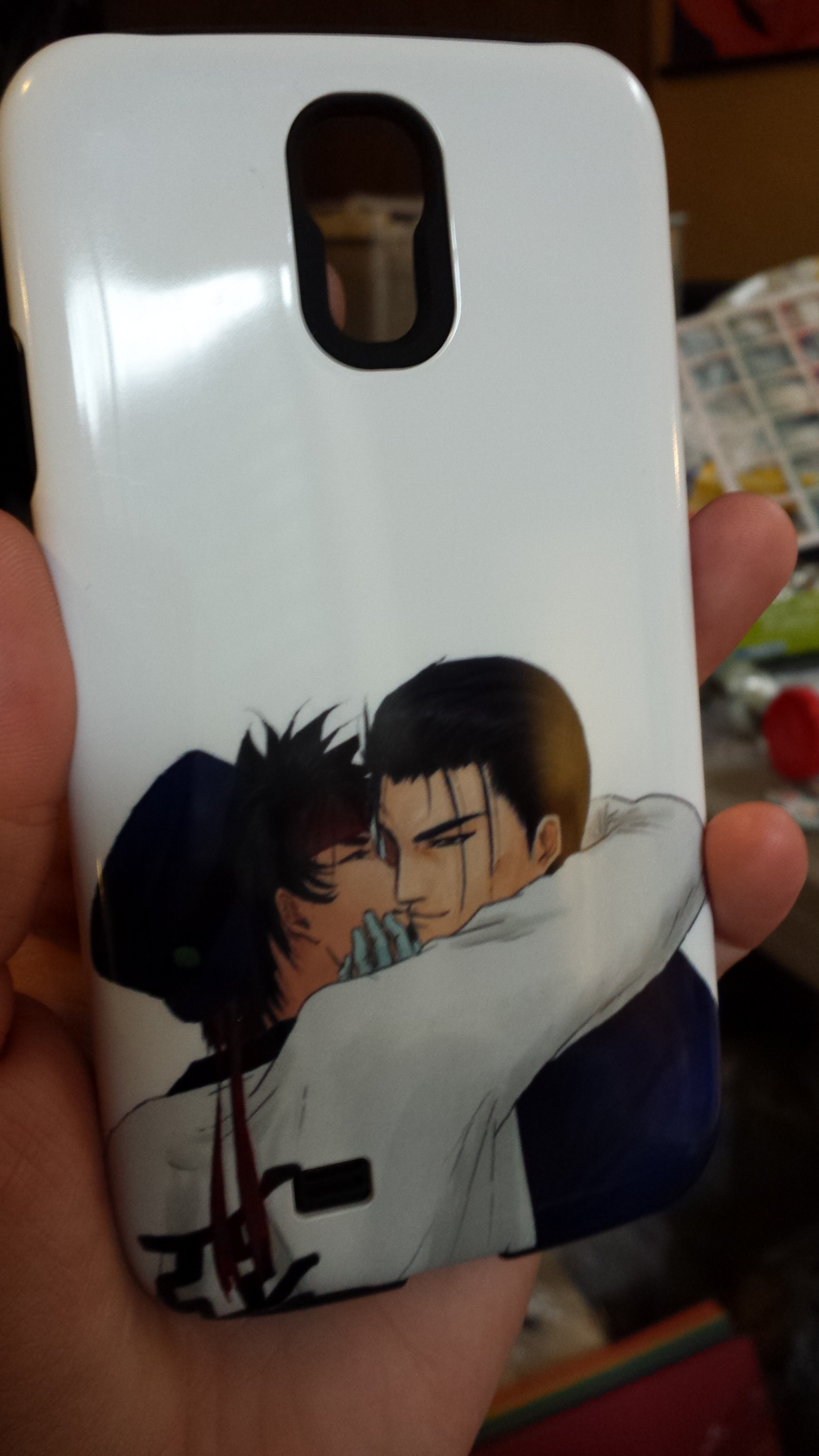 Um, try not to look at the background of those two photos, which can only lead to speculation about who’s been too busy to clean her room any time lately. Also, obviously, the cases are not on the phone since I found it an unnecessarily tricky business to take pictures of my phone with my phone camera. Anyway! I have not yet decided when/how often/under what circumstances I will switch them out. Right now the blue one’s on there.

And speaking of things I got recently that are Rurouni-Kenshin-related! See! 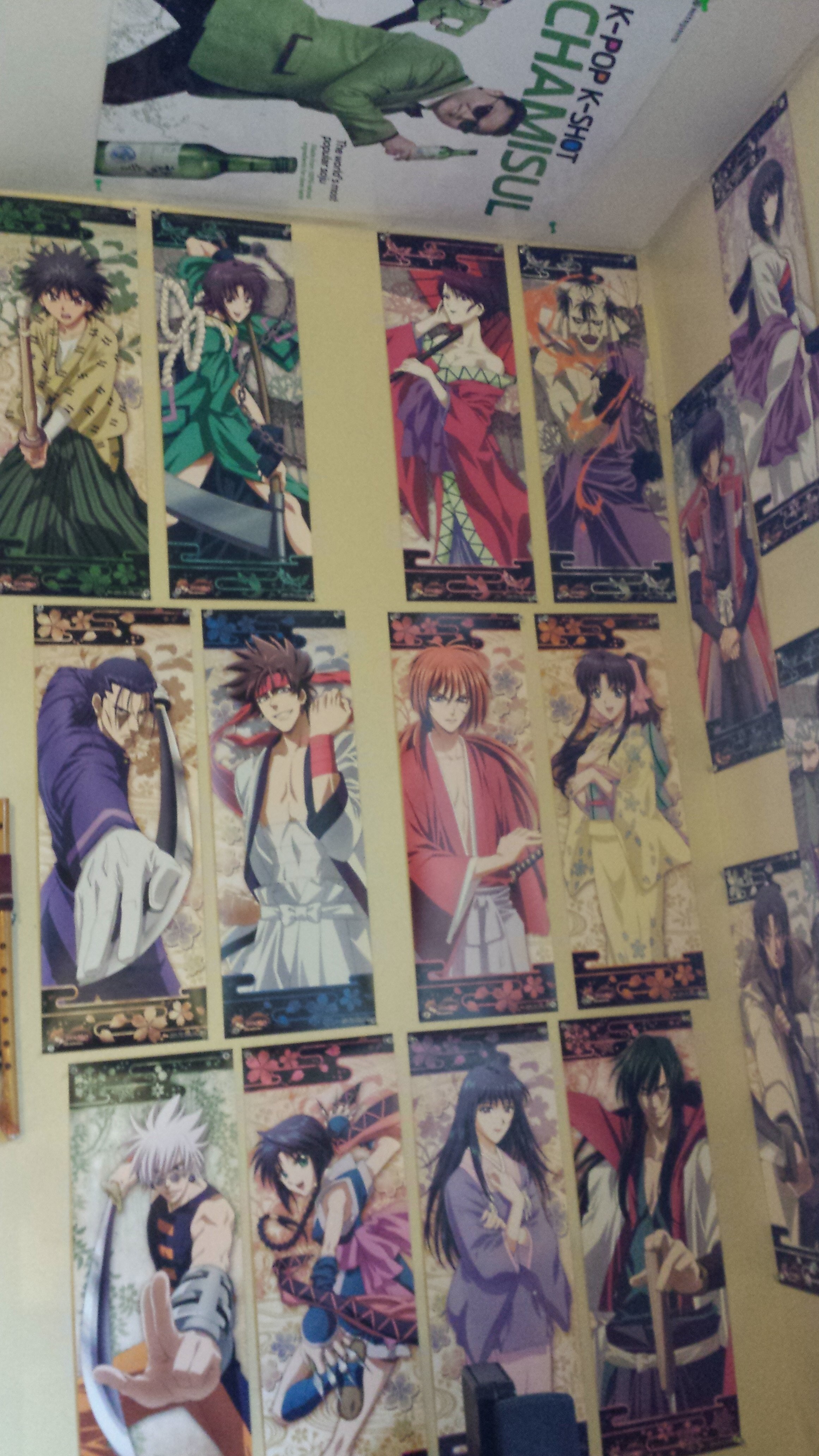 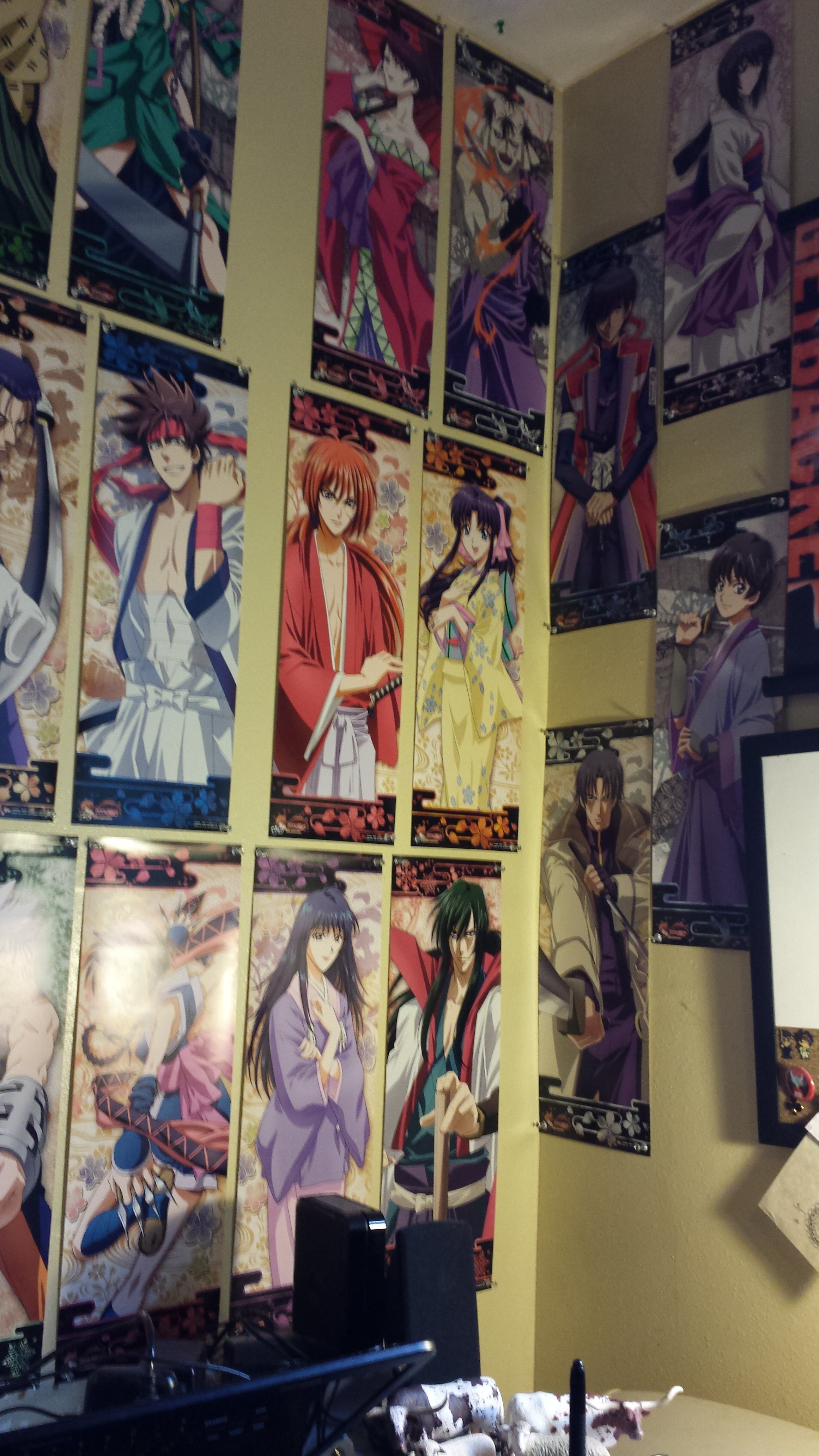 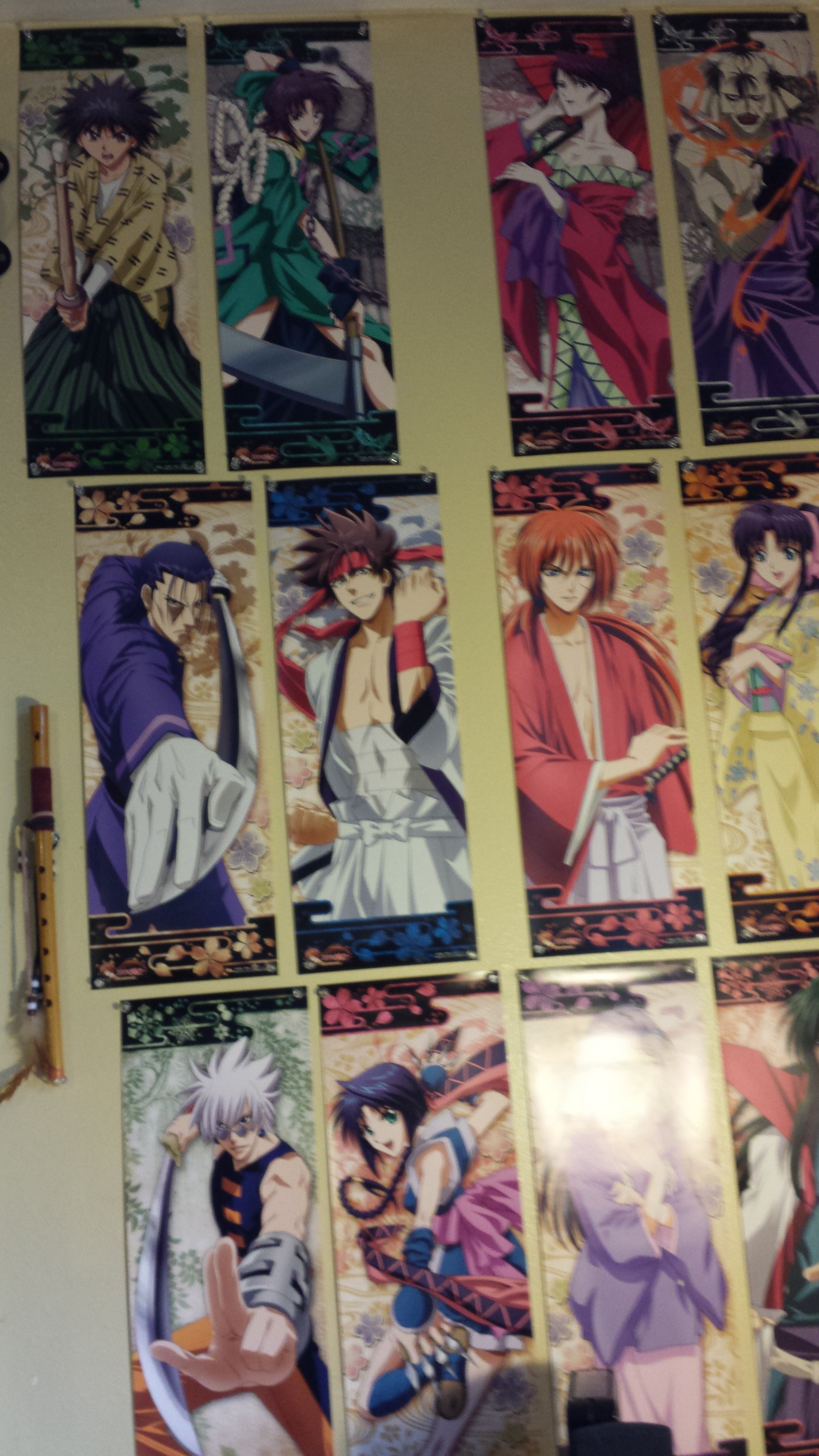 I’ve had my eye on this set of posters for approximately forever, but they were always going for, like, $90 for the set on ebay (and that was before shipping), and, utterly gorgeous though they are, I just wasn’t quite ready to pay that much for them. I knew I had to get at least Saitou and Sano eventually, though… but individual posters were going for as much as $30 a piece! Finally I saw the lot for $60 (including shipping this time) and decided to go for it. So far I am extremely undisappointed. Every time I look up at them, I’m gleefully undisappointed all over again. Well worth the money :D

And here’s another lovely picture I’ve taken with my lovely new phone: 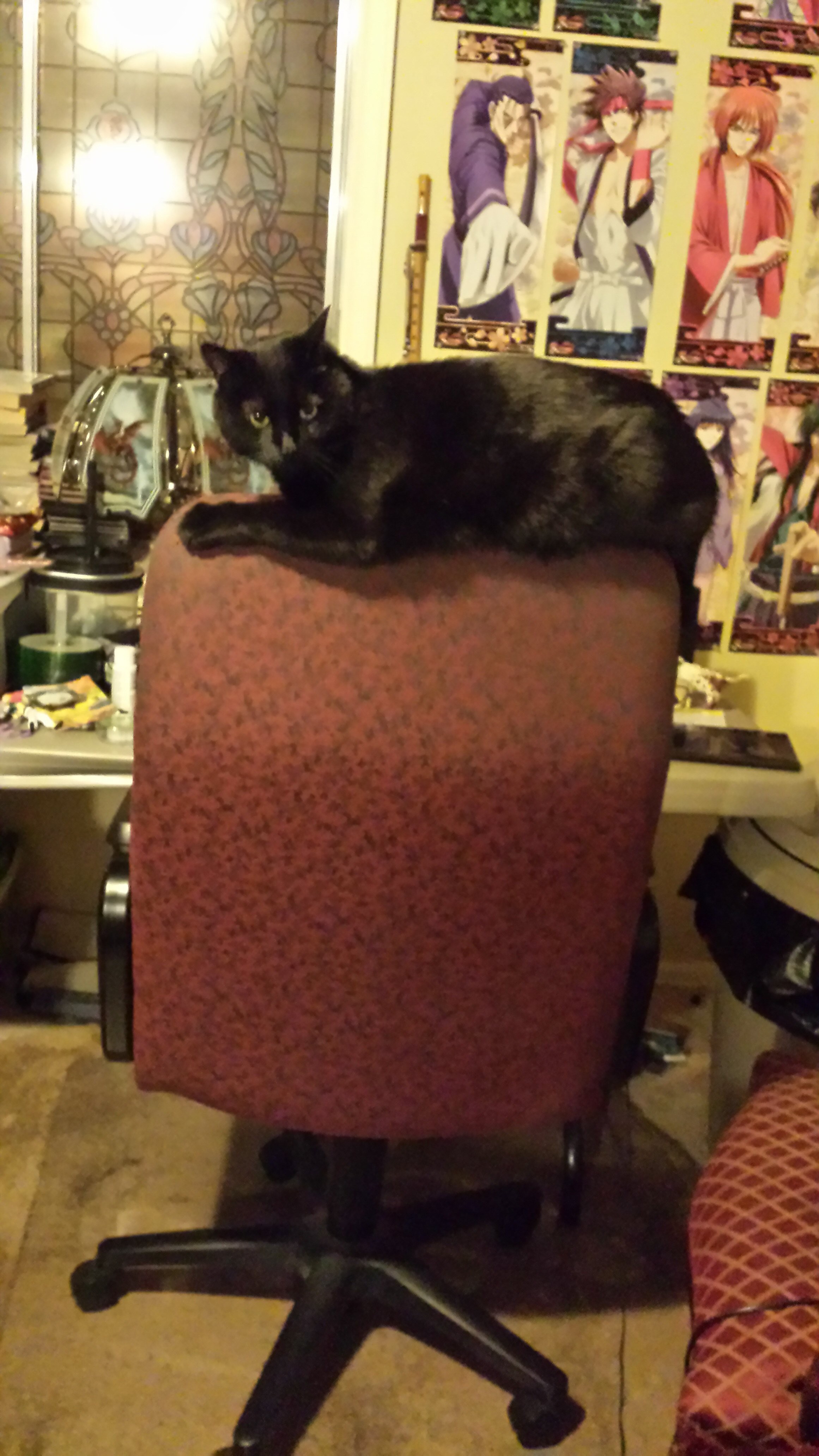 This is a thing my cat has taken to doing lately: she jumps up onto the back of my computer chair and just hangs out there. Sometimes this is while I’m sitting in the chair, sometimes not. I’m not sure why she does it, but it’s adorable and she is best cat.

Oh, man. My poor brother got into an accident in my car recently. He was undamaged, but the car has been in the shop for an eon already. Then yesterday before school, my dad’s car wouldn’t start. I spent, like, $100 on taxi fares because we didn’t have time to try to figure out what was wrong with it and we both had to be places. If I’d been aware that some car rental places will actually bring a car to you rather than require you to come to their facility, I could, I think, have spent less. Well, we live and learn.

Oh, and my sister had a baby, so now she has three children for whom the books I’m writing can be intended but who may never enjoy my style of writing that has a difficult time focusing on the adventure rather than the much more interesting interpersonal drama XD

Also, cantata has started. I find, somewhat to my surprise, that I remember this one extremely well and could probably sing most if not all of it without the music. Then remains the usual problem of not having sung all year and not being able to breathe properly practically up until the very day of performance.

And speaking of my mother and her music… Recently I had a lovely dream wherein she was working with a new acquaintance on some musical matter, and this woman was about my age and extremely awesome. I was crushing harder and harder throughout the business, but feeling it was hopeless because, despite her not being a member of my mother’s church, she was yet working with my mother on matters of Christian music and the chances of her being gay and into me were not great. But when they were finished with whatever it was that they were doing, she revealed that she, in fact, returned my interest! I did worry that the kiss we then exchanged would make my mother uncomfortable, but it was still a pretty badass dream.

So I totally plan on going to England to visit Zombie Girl later this year. The only thing that prevents this plan from becoming concrete and me from looking out for airline tickets is the possibility that I’ll get hired at my intern site (or conceivably some other site) during the course of my internship. But in any case, it’s a wonderful thing to look forward to.

All right, that’s all I can think of at the moment. If there’s anything else I need to catch up on… well, it probably won’t get caught up on. We’ll see how frequently I feel like making personal-life entries during the upcoming weeks!