Tell me, where are you going dressed to kill tonight?

I’ve been lazily cleaning my room today, and I’ve been dealing with all this stuff kicking around, in various forms, that I’ve meant to post about in my journal. So here’s a roundup of everything I can put my hands on right at this moment. Actually there are only four things here. Possibly there will be more sometime.

A spam email I got at one point said in the subject line, “Experience the efficiency of most innovative medications we have for your cock.” Another said, “Come boldly and see how we fucked – remember? -” Each of these statements has such an interesting tonal juxtaposition that I had to save them. Spammers should really learn a lesson from this: unusual phraseology makes you stand out far better than the usual boring stuff.

A classmate of mine told me one day that she recorded herself reading her notes aloud and then had her phone “transfer the recording into a music PDF or whatever” so she could listen to it in iTunes. Later, out of her presence, I laughed so hard I cried.

Once upon a time, some concerned party left a pamphlet at my house. I have no comment whatsoever to make about the contents of this pamphlet, but I can’t refrain from sharing the cover of same: 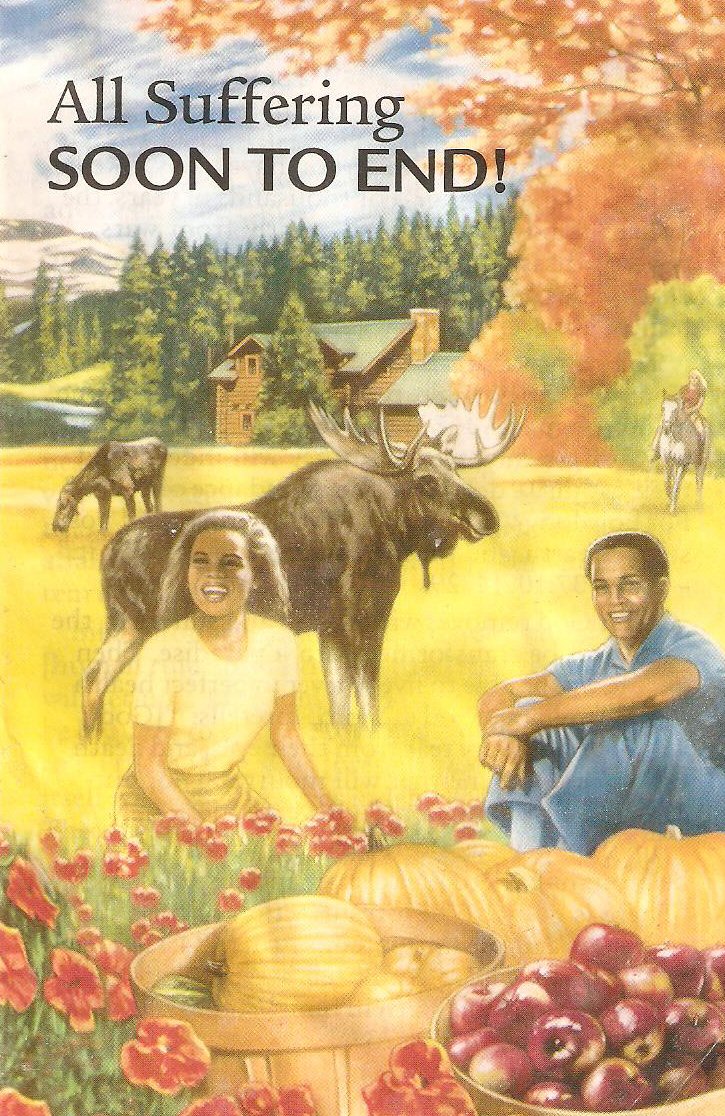 So let’s see what we’ve got here. Apparently, during a patchwork transition from summer to autumn that ripened pumpkins and turned the grass urine yellow but left at least one of the deciduous trees green and an entire field of flowers blooming, a stand-up comedian visited the ranch where everyone wears a single color each day and used zir powers of hilarity to distract them from their attempts at subduing the poppy revolution with baskets of mixed fruit and vegetables.

Even the resident moose was enthralled by the humor, though the dog-horse a little further off couldn’t quite hear the jokes and only went on eating the suspiciously acrid-smelling grass. The comedian was soon forced to flee the approach of a blonde Mountie, but not before snapping an incriminating photograph of the entire scene, which is now being distributed far and wide as evidence with the puzzling and somewhat worrisome attached message, “All Suffering SOON TO END!”

OK, seriously. I can get over most of this, but that moose just tips the scales. Who drew this picture? What were they smoking? What does any of this have to do with the end of suffering? Particularly the moose?