I’ve managed to survive another holiday week at Edible Arrangements! Perhaps it will be my last; who knows? As far as I’m aware, the spay/neuter clinic has not actually managed to have a conversation with either of the co-workers that are on my list of references… but during my interview, I did tell the clinic how hectic things are at EA during the week leading up to Mother’s Day (by way of explanation for when I would be able to start should they want to hire me), so it’s possible that, after failing to get hold of my co-workers last week, they decided to wait until after the holiday. I can only hope they talked to the doctor so my entire list of professional references doesn’t seem unreachable. Since this clinic is closed on Mondays, tomorrow is the earliest I could hope to hear from them or think to call them.

Ach, my poor hands and wrists. Normal EA work doesn’t bother them much, but the crush of holiday business leaves them in bad shape for a few days. My feet have mostly recovered, but my hands still ache. My brain’s reeling a bit too; writing is not working very well today.

Several weeks back, some kind of infection and swelling appeared in one of my upper ear piercings, so I didn’t wear anything in those holes for a while until it went away. Predictably, this allowed the holes to shrink down again to a 16 or 18. This irritates me more than I can say, but there is a silver lining. Once upon a time, you see, back when I worked at the dry cleaner, there was a little tray of small items that others working there had found in people’s pockets. And in this tray was a pair of the sweetest little earrings: 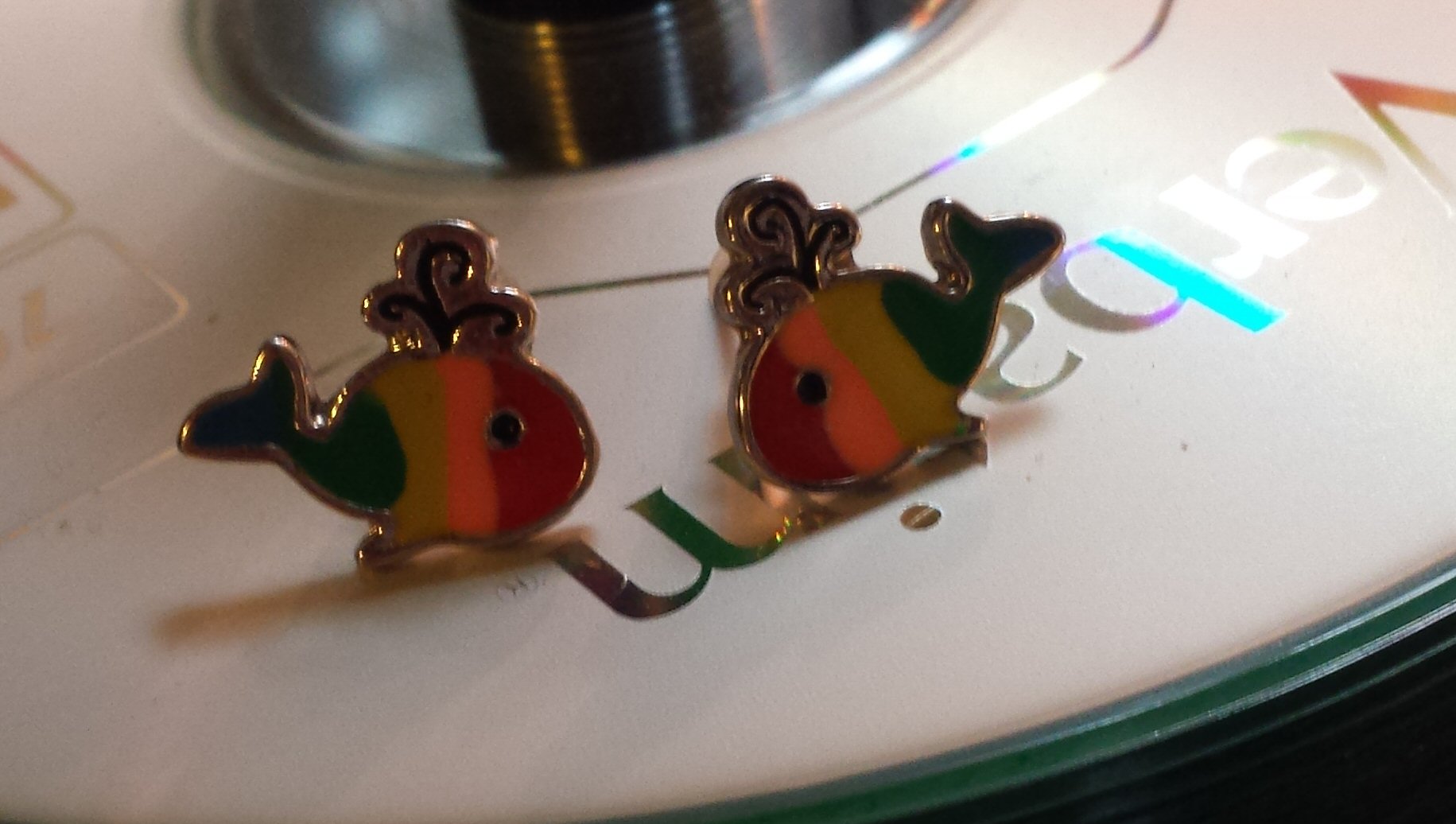 I snatched them right up and took them home (and named them Heero and Duo) despite my being all 6-gages and therefore having no practical prospect of wearing them. And they’ve sat around in my room ever since, adorable and unwearable. But now! Now I can wear thems. So these holes having shrunken doesn’t suck as badly as it could. I will probably want to gage them up again eventually, though, because the unending hassle that is earring backs — the reason I gaged in the first place — exists to this day. Still looking for some kind of adapting plug…

I can’t think what else I might have to say, so here are some more photos: 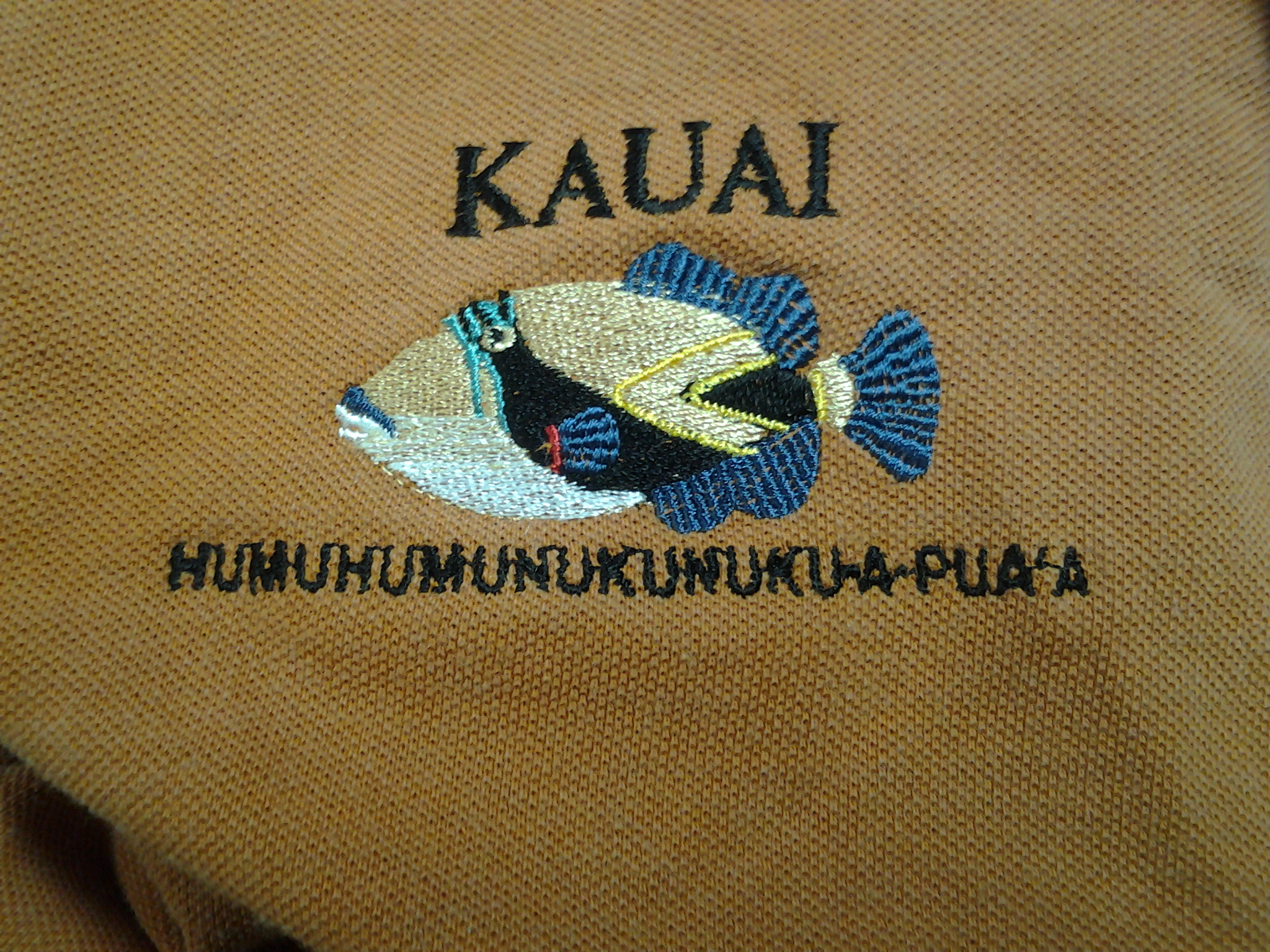 OK, I know this is the state fish of Hawaii, but for some reason it just cracks me up beyond reason to see the entire word all embroidered out on a shirt. (Obviously we’re still in the dry-cleaning era here.) 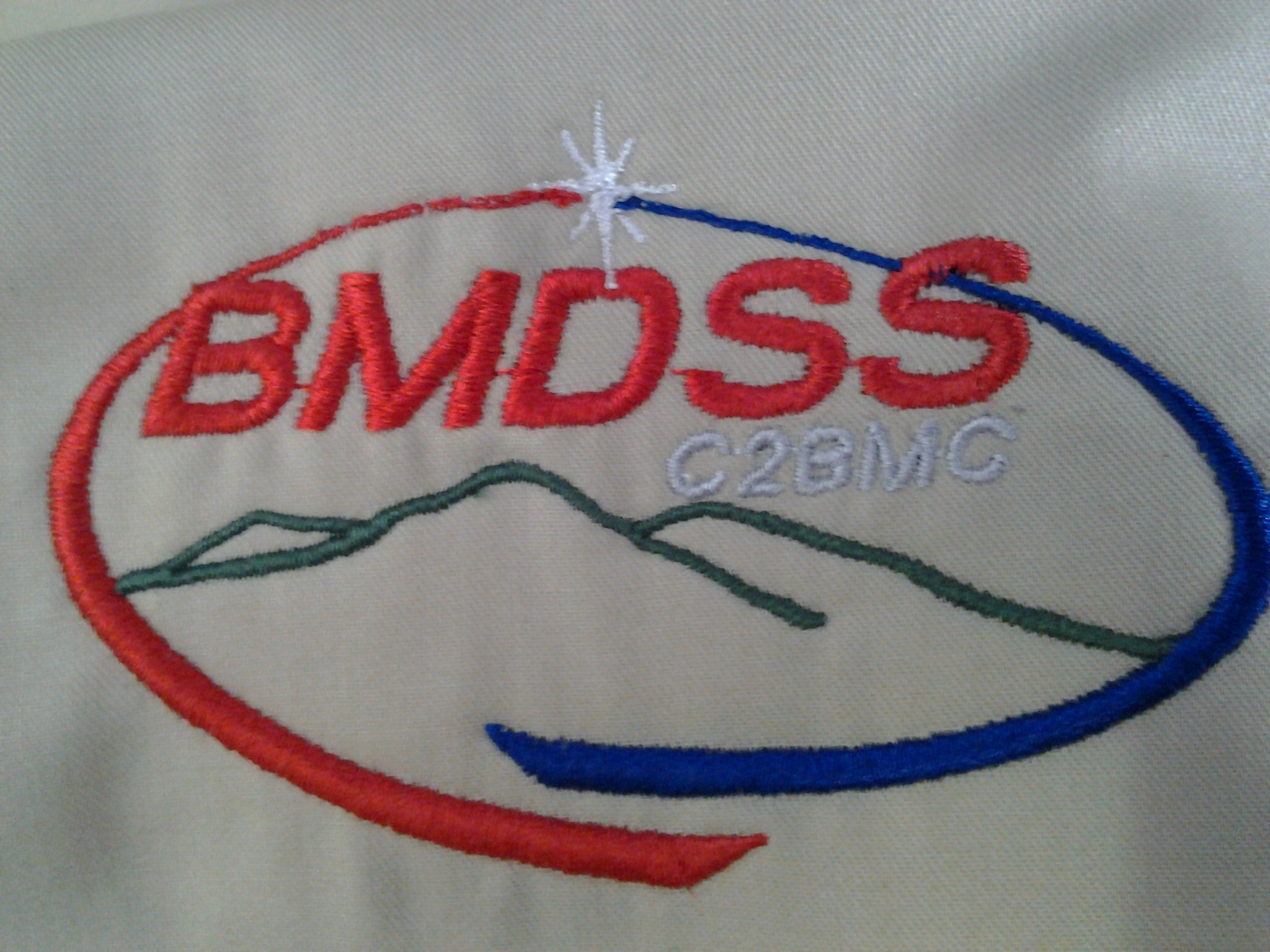 BMDSS. I mean, there’s nothing wrong with a company named BMDSS, but not only does it look like “BADASS” at a glance (to me), then I see it properly and try to pronounce it phonetically, which sounds really funny. Also there are other incomprehensible letters and numbers after it, so the whole thing’s just a mess. That is all. 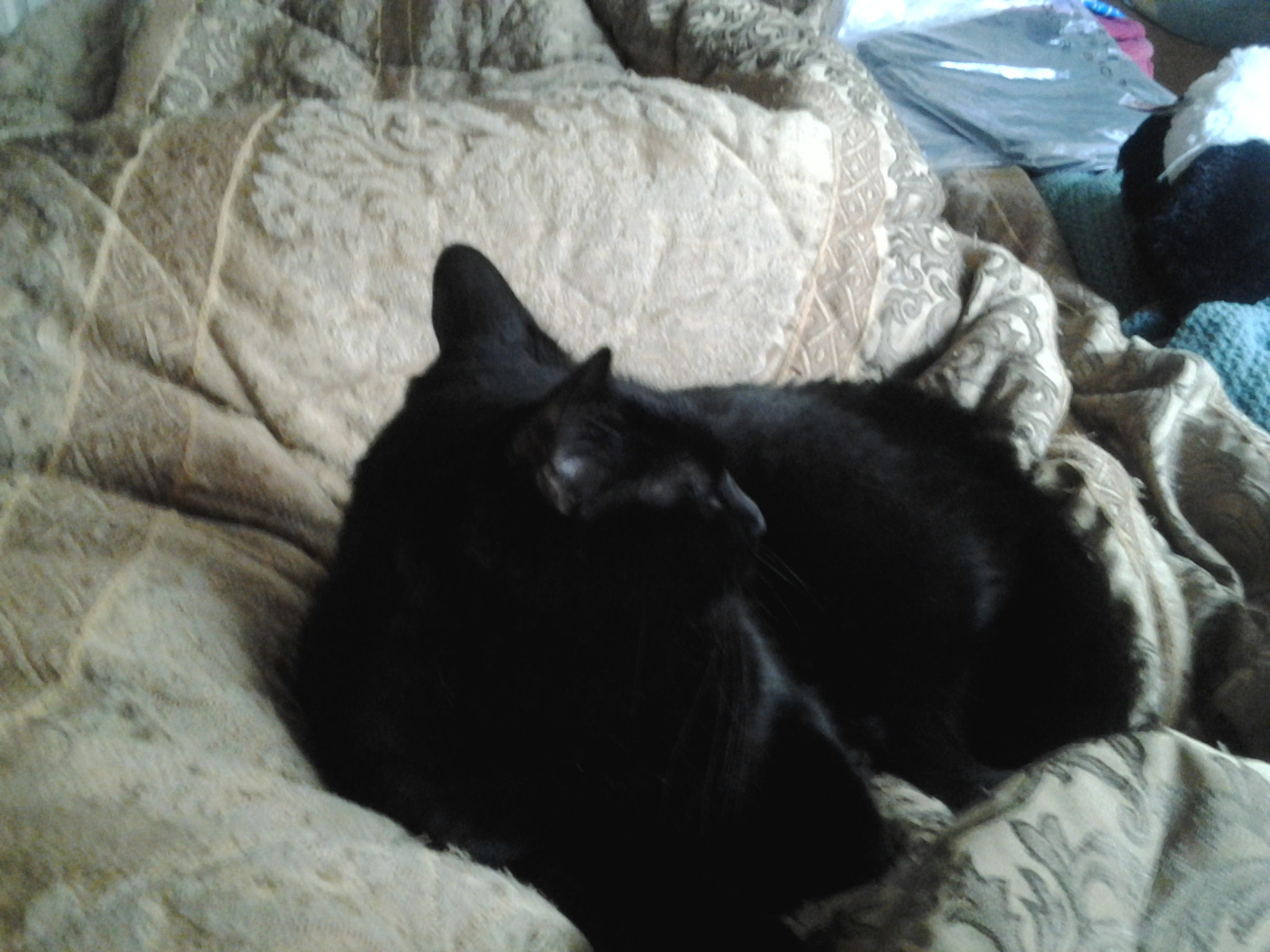 Cat reclines in stately elegance on the blanket. 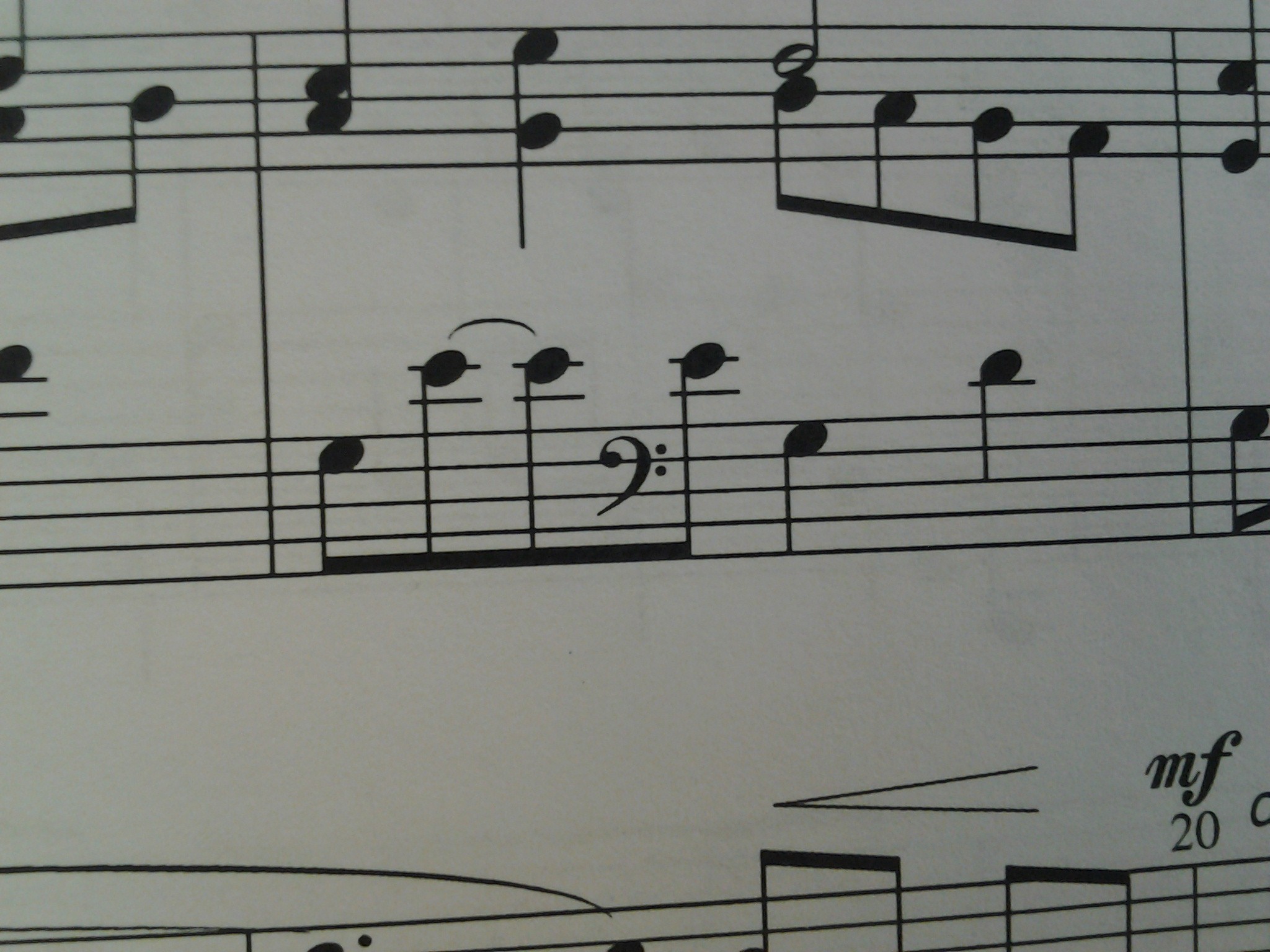 MY FAVORITE BASS CLEF EVAR. It got tired of its boring job and sneaked into the MIDDLE OF THE ACTION YEAH!! This was in cantata music, I think, the year before last. When I pointed it out to mom, she just rolled her eyes. I love it.