I was afraid that, only a week into this, I wasn’t going to be able to have a productivity log this weekend, because, just at the tail-end of my previous illness, another and much worse one tackled me out of nowhere on Thursday night. But finally, maybe thanks to the drugs, maybe thanks to cat magic, or I dunno what, I actually feel up to working on stuff. So here we go.

This weekend’s playlist is the leftovers from last week’s plus the “New Music” folder on my desktop in which I put everything I buy before I bother to organize it properly. Snacks for this weekend include codeine, oxymetazoline, and chlorpheniramine maleate. And good old acetaminophen, of course.

I’ve mentioned multiple times in the past that I need to start my art exchange piece earlier in the month so I don’t have to do the entire freaking picture on the very last weekend and risk it absolutely sucking. It’s pretty sad that my actually posting a monthly art exchange piece here has become an anomaly rather than the norm.

Unfortunately, being so behind on Confrérie, weekends have been largely dedicated to getting the latest part of that ready, and I haven’t had a lot of free time or energy to spend on getting my art exchange piece started earlier in the month so as to work on it a little every weekend and have it done in timely (and hopefully visually acceptable) fashion.

Therefore, I started this month’s art exchange piece on Friday after work. I felt so awful, though, that I only got through most of the initial sketch before I gave up. Then all day Saturday I kept thinking, Art exchange piece is the one thing I absolutely have to get done this weekend. Even if Confrérie and Substantiated end up having to wait, this must get finished. That led to 0 work on it on Saturday, but, hey, it was a good thought!

I’ve noticed that I tend to get assigned to be the first to draw for new people that join this art exchange — probably because I’m almost never late with my submission (it’s happened once in, like, seven years of monthly exchanges), which makes a good first impression on a newcomer. This being the case, I feel like it’s even more important than usual, when I’m drawing for a newcomer, to get my picture done in time; thus the above thoughts.

Anyway, fortunately, I’ve made enough progress now that it’s obvious I will have this picture done before the month (and the round) is over. It even has a background, of sorts, which is something I’ve been trying to make sure my pictures have for a while. So go me.

Of course all this week I’ve been pondering the same part-order question as before, and eventually did decide (at least for the moment) that last week’s choice was indeed the correct one. Little more thought was required to decide on the answer to the subsequent, Should I alternate Duo/Heero and Trowa/Quatre parts or keep them in two-part blocks? Actually all these answers should have been obvious from the very first moment… actually I should have been farther ahead and had plenty of time to see them… but whatevs.

Standard part length has increased so much lately; it’s up to over 2,000 words, which is weird in this series. It makes rereading Plastic, with its early parts at, like, 600- and 700-some words, reeaaallllyyyy weird. I wonder how lengths will change as we proceed…

I’m not sure I’m happy with the editing on part 53; I feel like it needed a lot more work, but I can’t be sure because, even up to getting stuff done, I’m still sick and not thinking entirely clearly. Mou.

I’ve got a sort of running joke in this game (very subtle, and probably only funny to me) that it’s illegal throughout the nation of Romantan to kill your enemies because nobody can handle Kenshin’s angst. So when you defeat an enemy in battle, you merely force them to retreat: 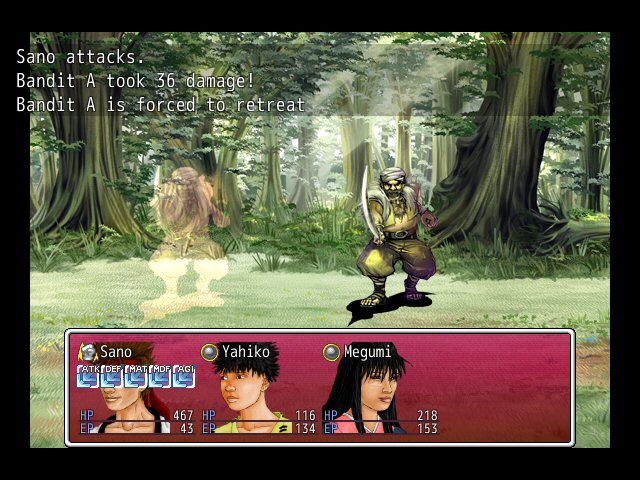 But in Saitou’s quest that I’m currently working on, naturally he wants to be able to capture the people that have been confirmed as double agents in order to get information from them. And I’m having the damndest time trying to figure out how to change that wording in the battle text just temporarily. It looks like I’m going to have to end up posting on the RPGMVXA forums, and I can’t say I’m a huge fan of doing that XD

Substantiated is… OK. Like I said last week, it may be a bit before I get back into the groove. And meanwhile, something is better than nothing. It fits to post just an OK story on a birthday when I’m this damn sick in any case XD