Happy Densetsu no Saigo Hen day! I wish I had a story to post to celebrate this day, but it’s the middle of the month, so I’ll just make a personal entry instead. Stuff’s piling up, as usual, for me to post about in any case.

I had a birthday! Despite being sick, I enjoyed it very much. We were going to go to Bishop Castle on the Monday, assuming I felt well enough, only then brother didn’t get out of bed until after noon and wasn’t showered and ready for life until 1400, so there wasn’t enough time. But then he made me a birthday dinner and a birthday cake and also bought me totally unnecessary presents, so I suppose he kinda redeemed himself XD 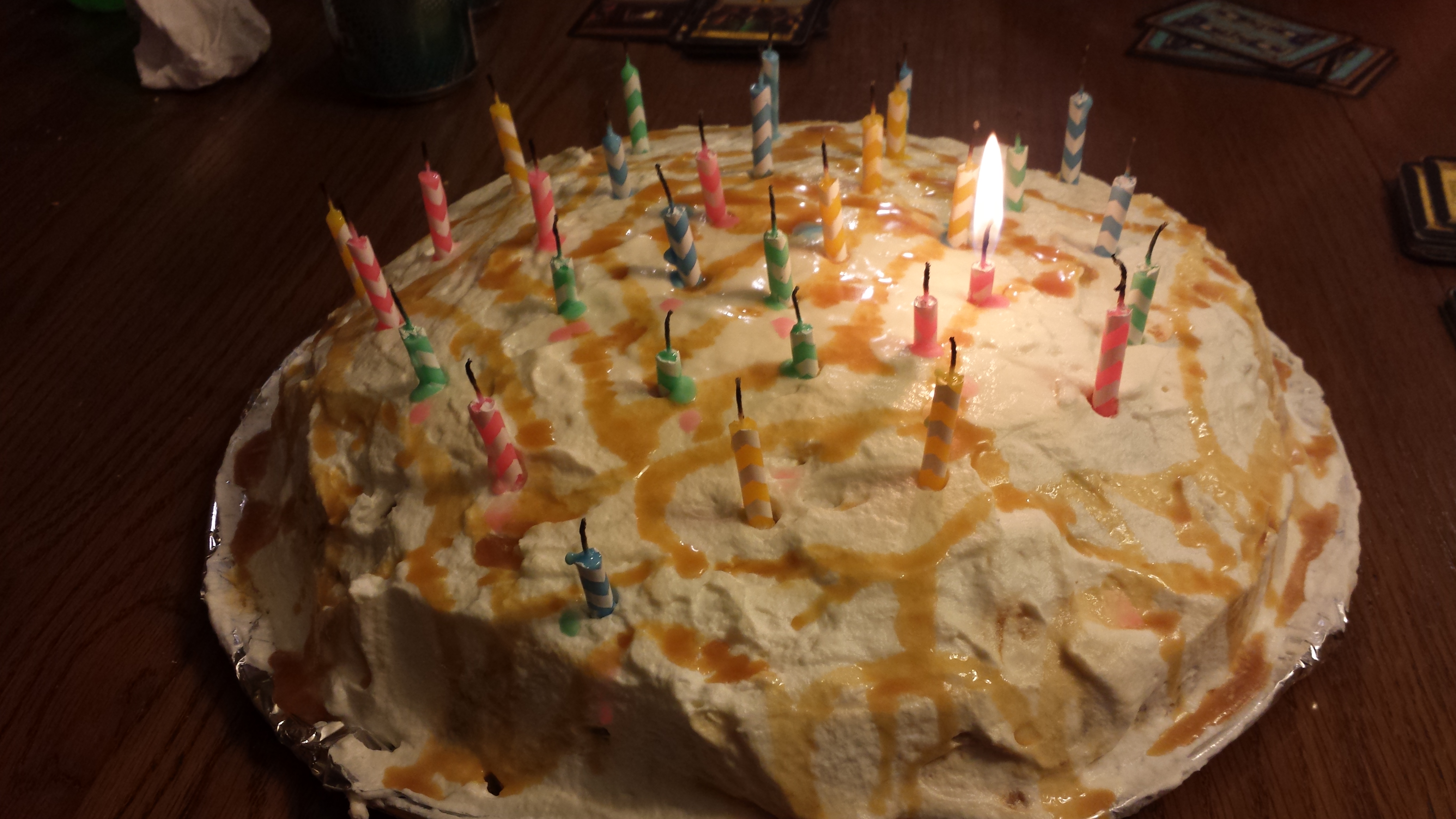 It was a spice cake with butterscotch pudding and whipped cream on top, and it was FREAKING DELICIOUS. It only had 32 candles because I fail at maths and for some reason thought that two packages of 16 would be sufficient. Seriously, though, I think it’s time to stop doing all the candles, because having to buy three packages just seems silly and they take an eternity to light and get wax all over the cake by the time they’re done. I’ll get some numbers or something next year. 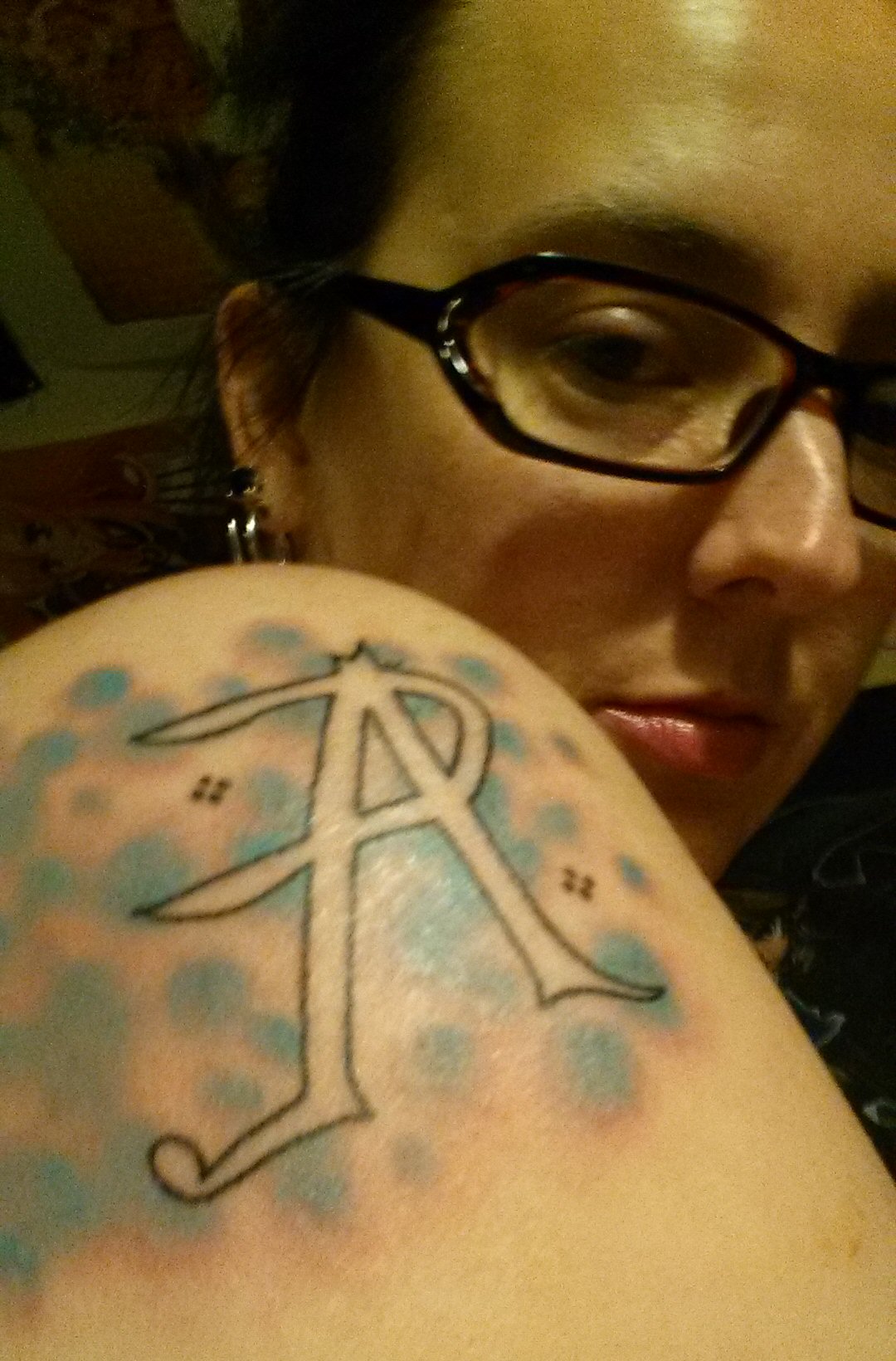 Now neither the angels in Heaven above, nor the demons down under the sea, can ever dissever my arm from the sign of the wonderful E.A.P..

I made the appointment to get that tattoo yesterday, and I was so excited about it that it caused me to dream about something else I’m excited about, which is our Disney World trip in December. Did I mention that several members of my family are going to Disney World in December, and ever since that plan was made I’ve been dreaming about it?

Anyone that follows my personal entries must be well aware, of course, that I dream about Disneyland all the freaking time. But I’ve actually been to Disneyland, and never to Disney World, so the Disney World dreams are even less accurate than my already weird Disneyland dreams. The same theme is often present, though: Oh, crap, I’ve been here three days and haven’t gone on any rides yet!! As I’ve mentioned before, I always wonder what my dream thinks I have found to do in Disneyplace for three days besides going on any rides XD

I also dreamed I was Luann DeGroot. I was on my way to a high school prom in a car full of people, two of whom were elves and one of whom was an adult man that I think was a co-worker of my father. This guy made an incredibly racist comment about elves, and I got so angry at him that I launched into this lengthy rant that ended by telling him to get out of my car and crying off all my carefully applied makeup.

When I mentioned this to my family, the predominant first response, besides incredulous laughter, was, “When was the last time you read Luann?” Because we haven’t gotten a newspaper around here for probably a decade XD

Also! I got bitten RIGHT IN THE FACE by a miniature pinscher. It’s probably going to turn into a pretty badass scar. That was not a dream; that was a work thing. I have yet to get a decent picture of it, though; the light’s always bad and you can’t see it clearly. It’s a line maybe 3/4 of an inch long on my chin.

Oh, speaking of work things… the other day, a co-worker and I were scrubbing/assembling packs, which is a thing we do facing this big ol’ window onto the parking lot. The parking lot on that side of the building is an alley between our building and the next businesses over. So this guy pulls into the space right in front of us, and we start joking about how he’s probably waiting there for a drug dealer because he has no license plate (only a super fake handwritten fakie temporary tag with just a date on it) and he backed into the space as if to facilitate a quick getaway if needed.

And then this other car with all tinted windows pulls up, a guy — a guy in a shirt that LITERALLY SAYS “Usually stoned” on it — gets out of the back seat, comes to the driver’s window of the first car, makes some kind of exchange with the first guy involving a baggie of something white, and then gets back into black-tinted-window-car and drives off.

I mean, we actually watched an entire drug deal from beginning to end standing about eight feet away from it behind a NON-TINTED WINDOW. Way to be freaking subtle, guys!!

How about some other photos, since this is a personal entry. 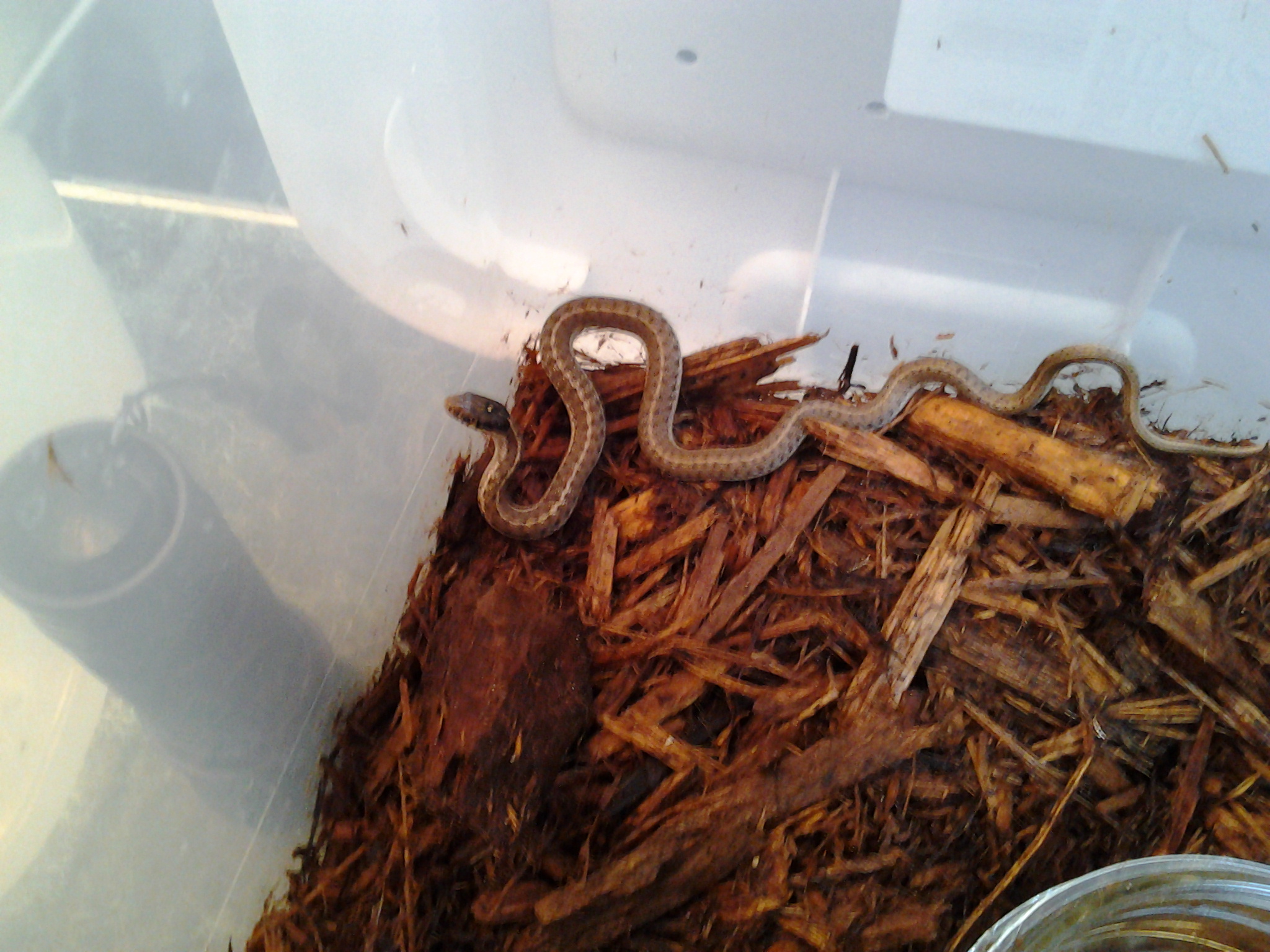 Look at this super adorable baby corn snake ZOMFG!!!!!! This was at my school at some point. 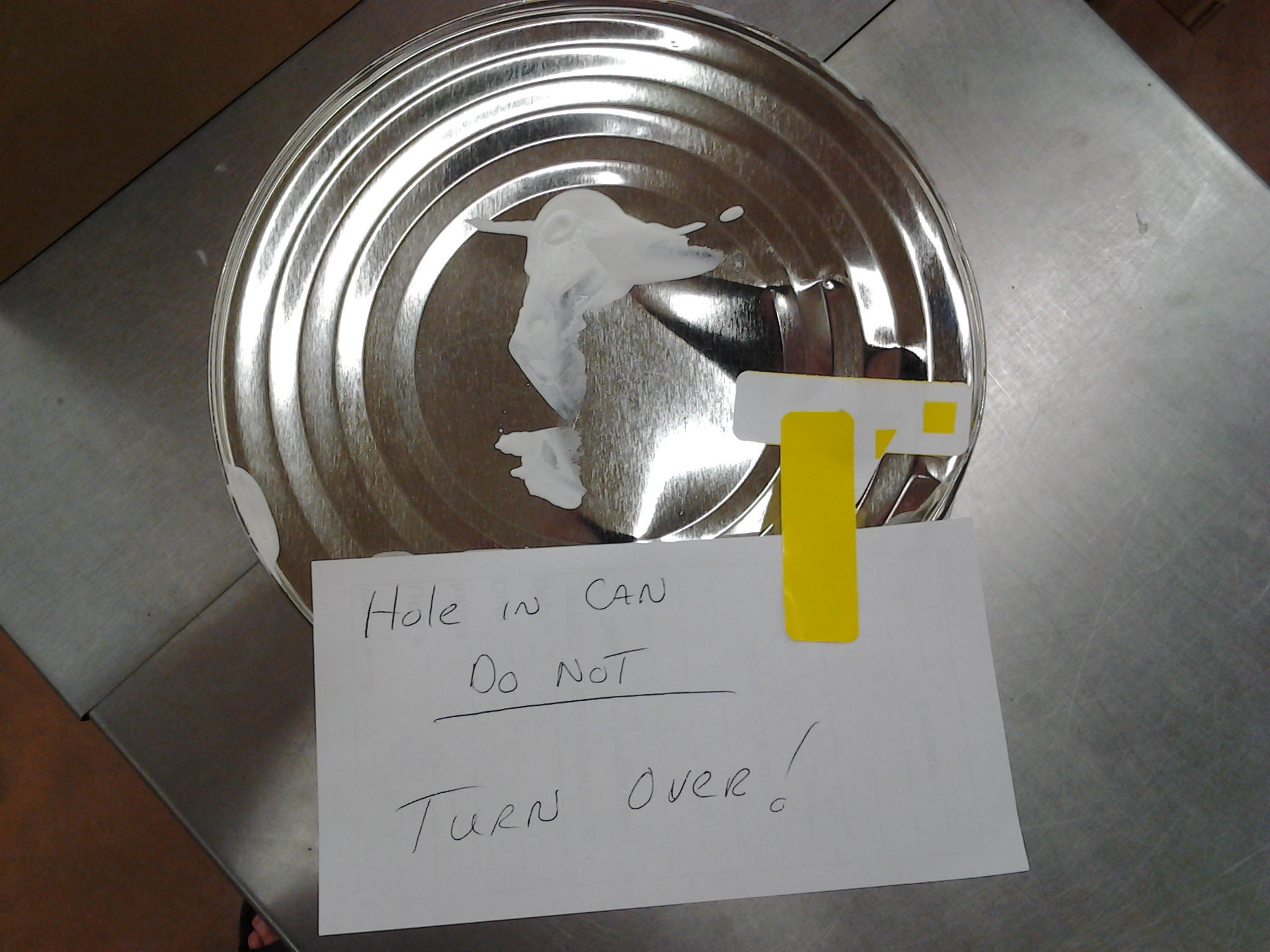 I’m not sure where I saw this. Home Depot or something? Anyway, I liked how… obvious… it was. 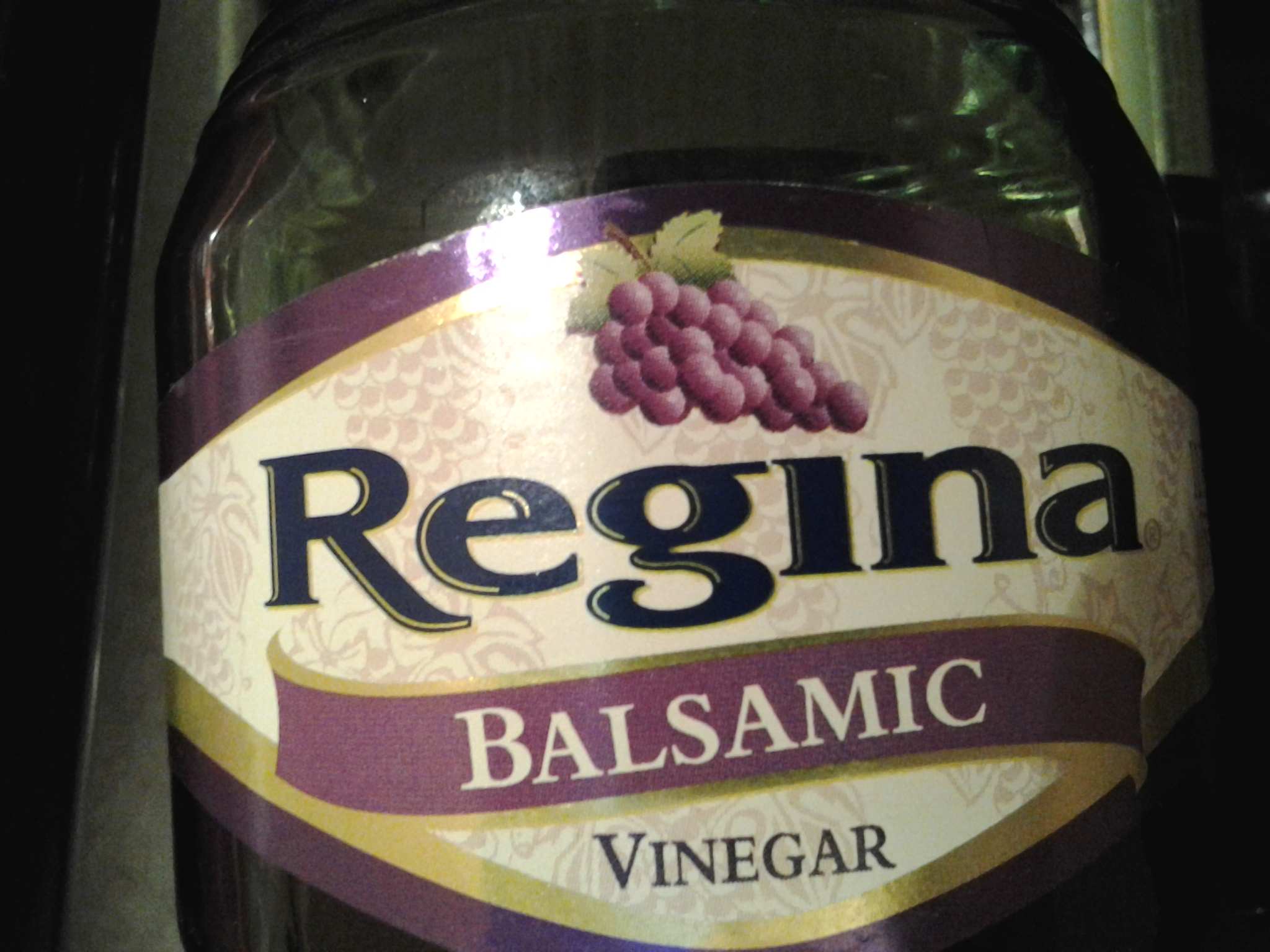 There is almost nothing interesting about this picture, but I’m pretty sure I took it because I’d just started watching Once Upon A Time the previous day and then I saw this in a grocery store.

And now I’ve forgotten all the other stuff I needed to post about. Happy Densetsu no Saigo Hen day, everyone!