PL: Confrérie, Quatre and Trowa art (and other), Substantiated recording (and others)

Ah, so much neglect. Well, let’s do this. Weekend playlist is all the new stuff I pirated off that co-worker I was pet-sitting for as well as all my miscellaneous and anime soundtracks. Some random candy has served as snacks, but I haven’t actually had a lot to eat XD So let’s see what I’ve been up to.

La Confrérie de la Lune Révéré — I had trouble working on the story for a couple of weeks, and then after that I was out of the habit and out of the groove, so not working on it simply continued as if it were the natural thing to do. I’ve been struggling, in severe annoyance, to get back into the groove, and have found part 57 hella difficult to get done — whether just because of the habit having been broken or because it was destined to be a difficult part to begin with (or some combination of these) I don’t know. I keep reworking the damn thing, and, though I’ve come up with a beginning-to-end sequence I can accept, I still don’t know how satisfied with it I can be.

This dissatisfaction may be merely another part of the overall dissatisfaction I’ve been feeling about the story as a whole. As in previous weeks, I just have to wait until the thing’s done and I can set it aside for six months before going back to it and deciding what needs to be altered. That’s… annoying. BUT WHATEVS LIFE GOES ON.

Quatre and Trowa art — I was searching for a lovely fanart of Quatre and Trowa to make into a custom case for my phone, because I love custom phone cases and that is a pairing I would like to have my phone represent at times. What was my dismay not to be able to find anything! In some frustration and more or less on a whim, I started drawing a picture of them of my own. Most likely it will not be any more suitable for customcasedom than any of the fanarts I found online, but I sure am loving the way it’s looking so far. Have some progress shots: 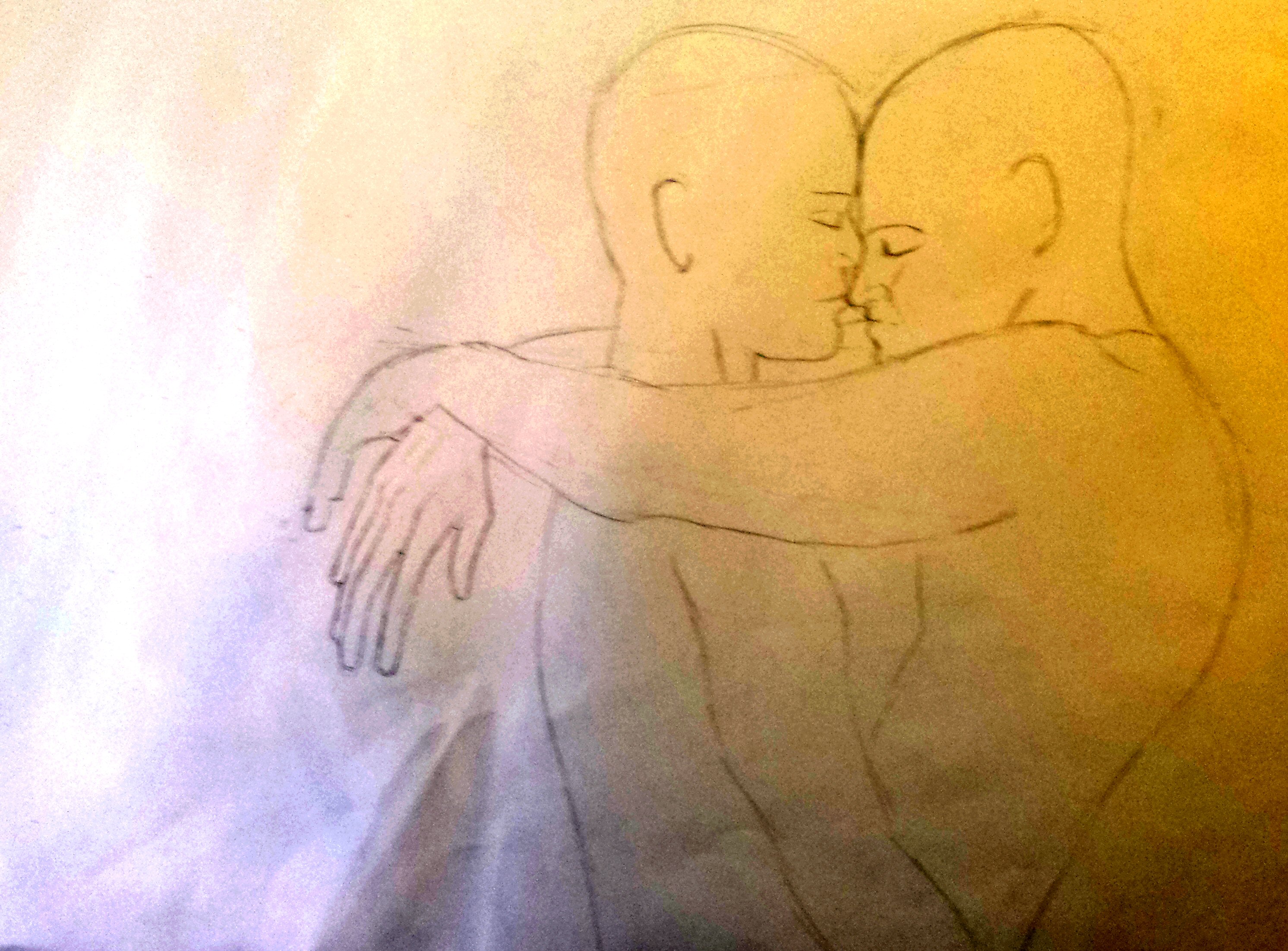 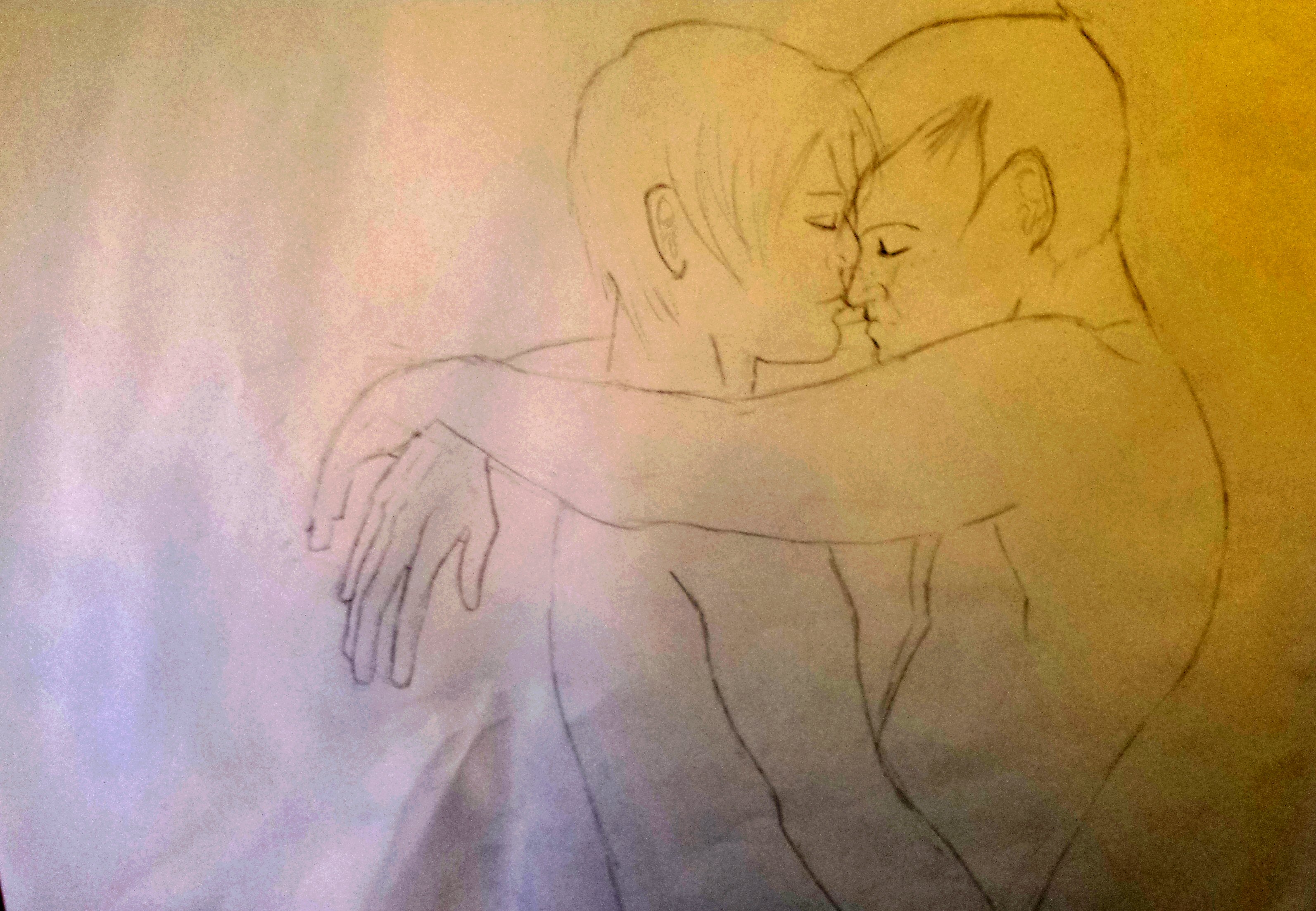 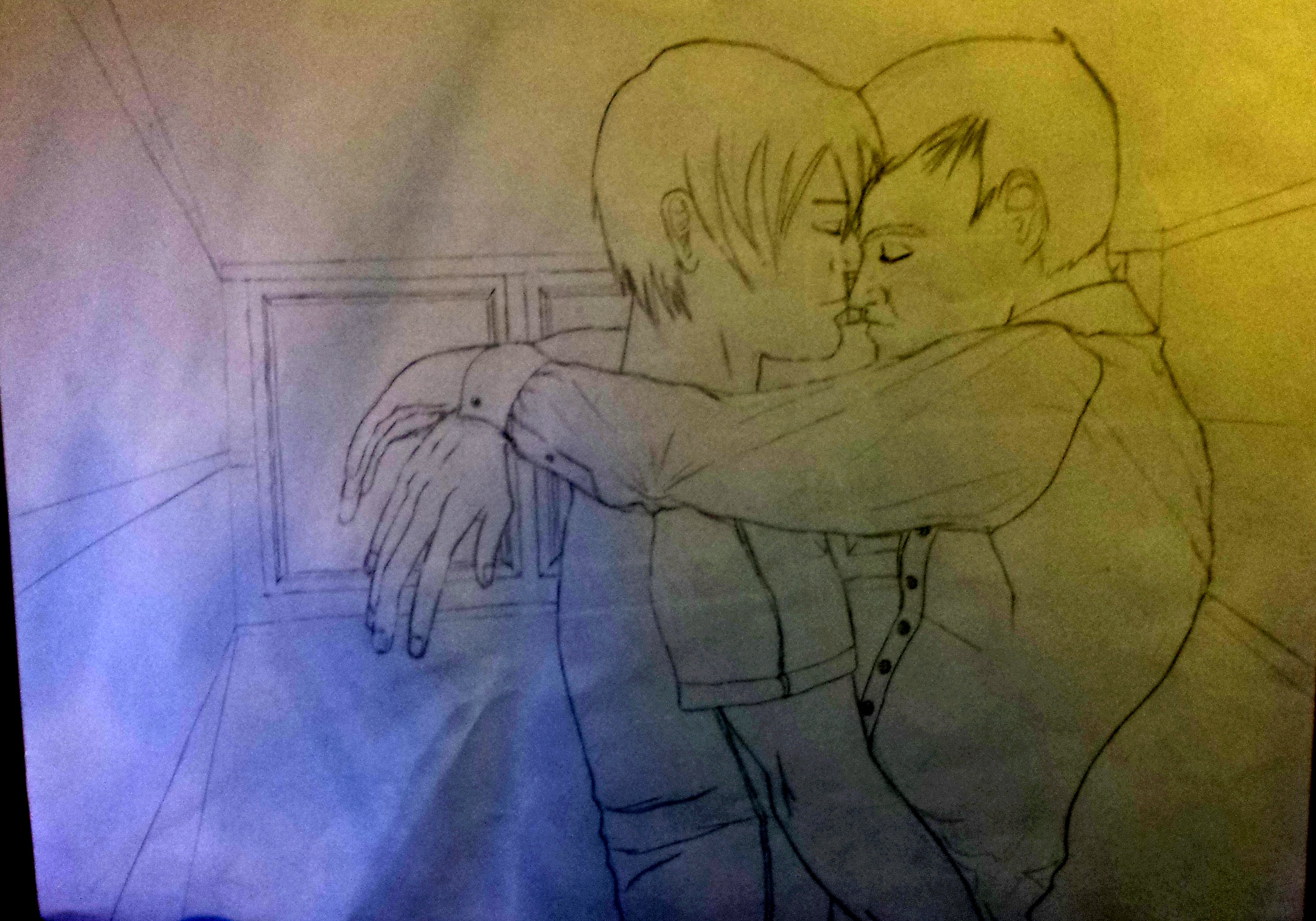 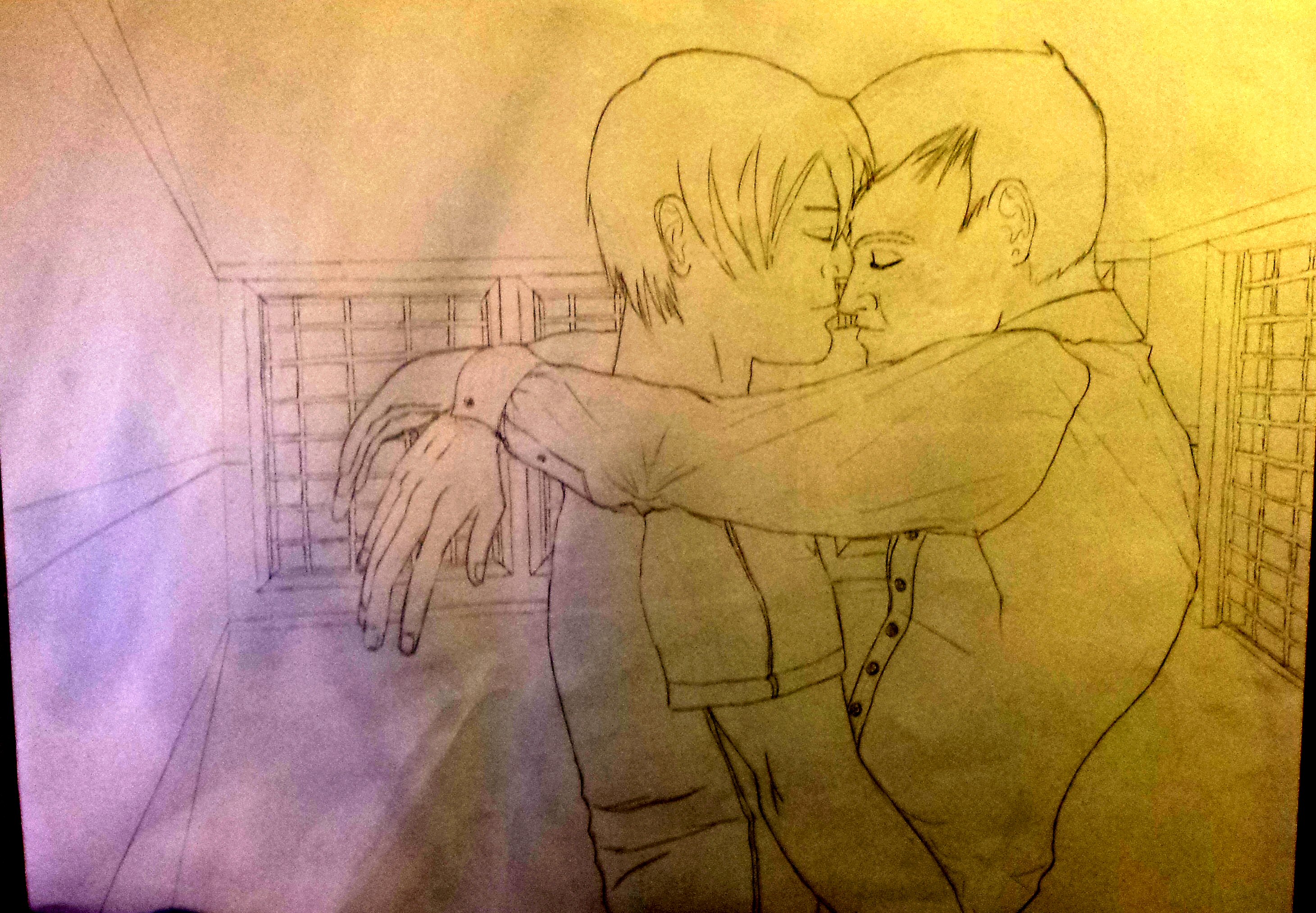 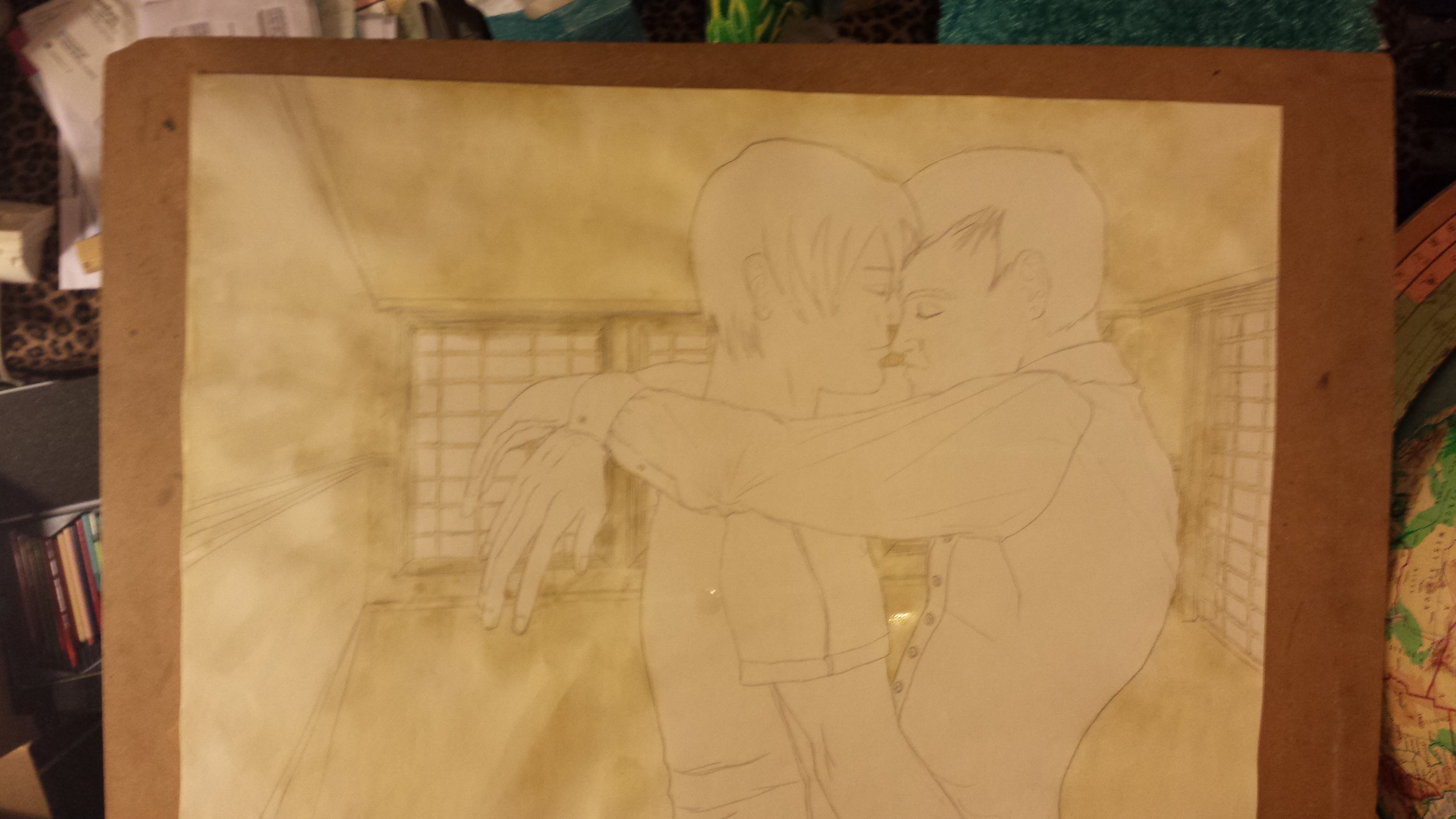 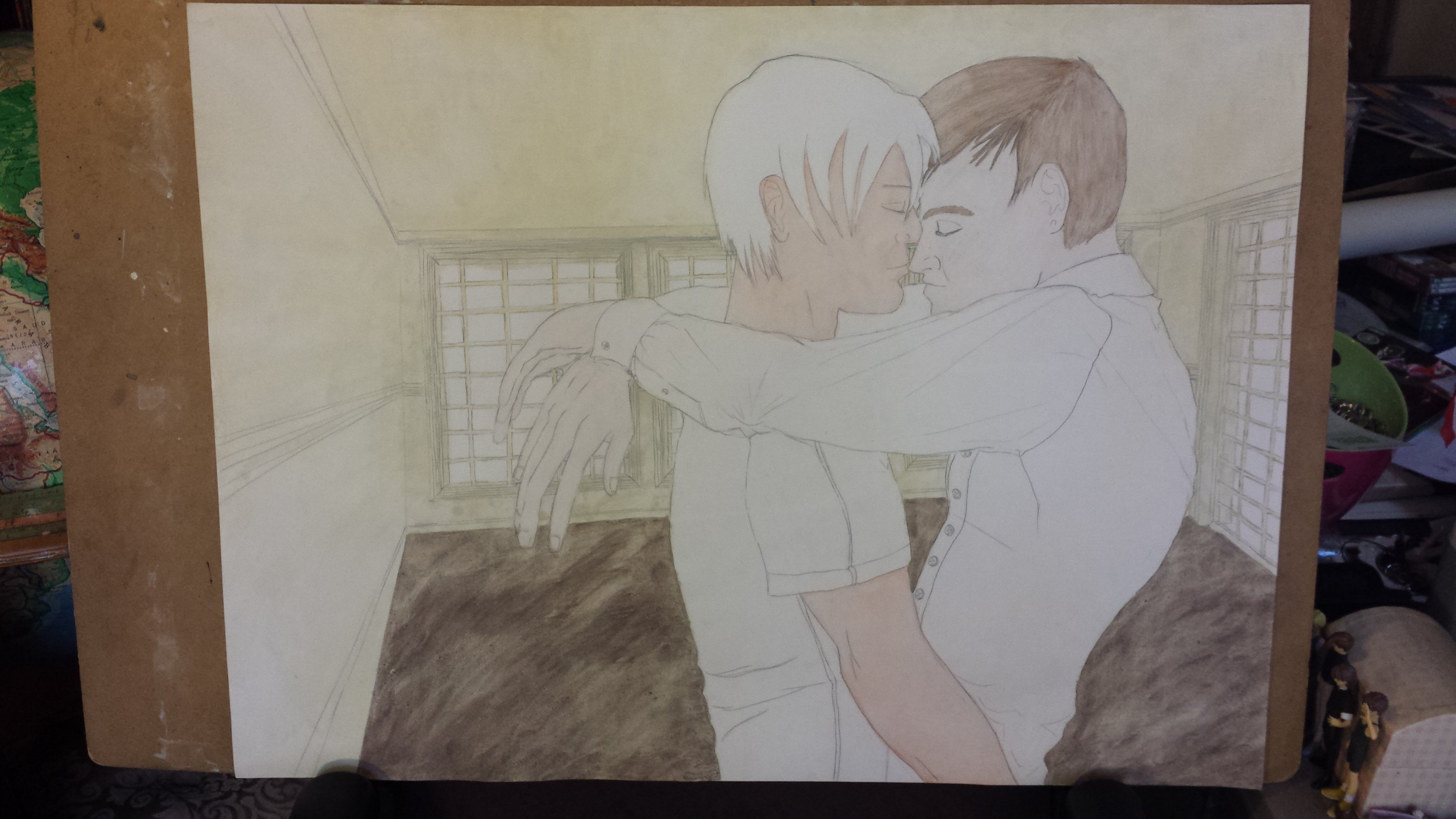 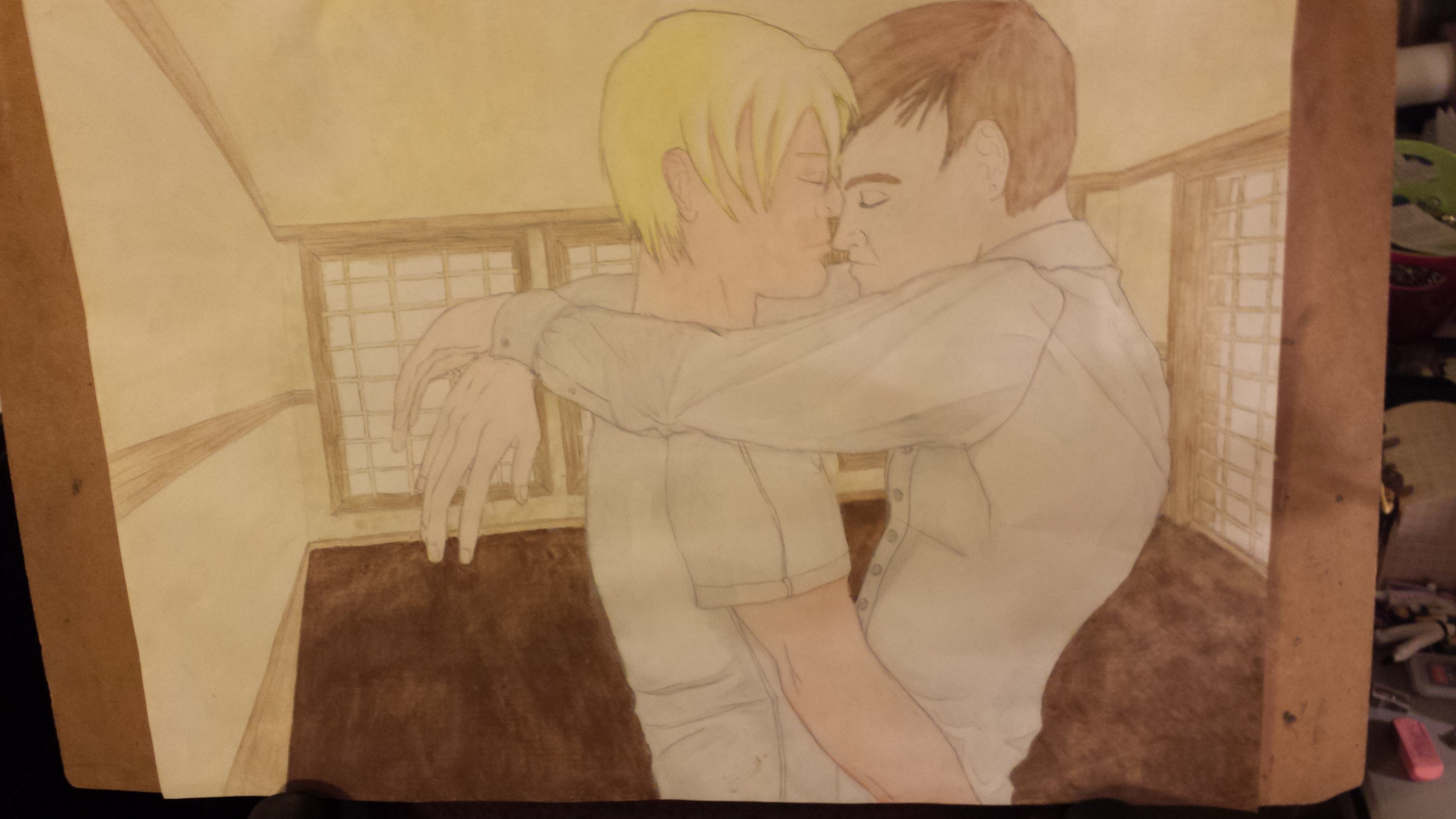 You can’t really see Trowa’s freckles in these pictures I took with my cell phone, but this is a HoH picture. They’re in Trowa’s new empty dining room. So there.

The other thing I drew this weekend is a little item inside a co-worker’s birthday card I brought home on purpose to draw this: 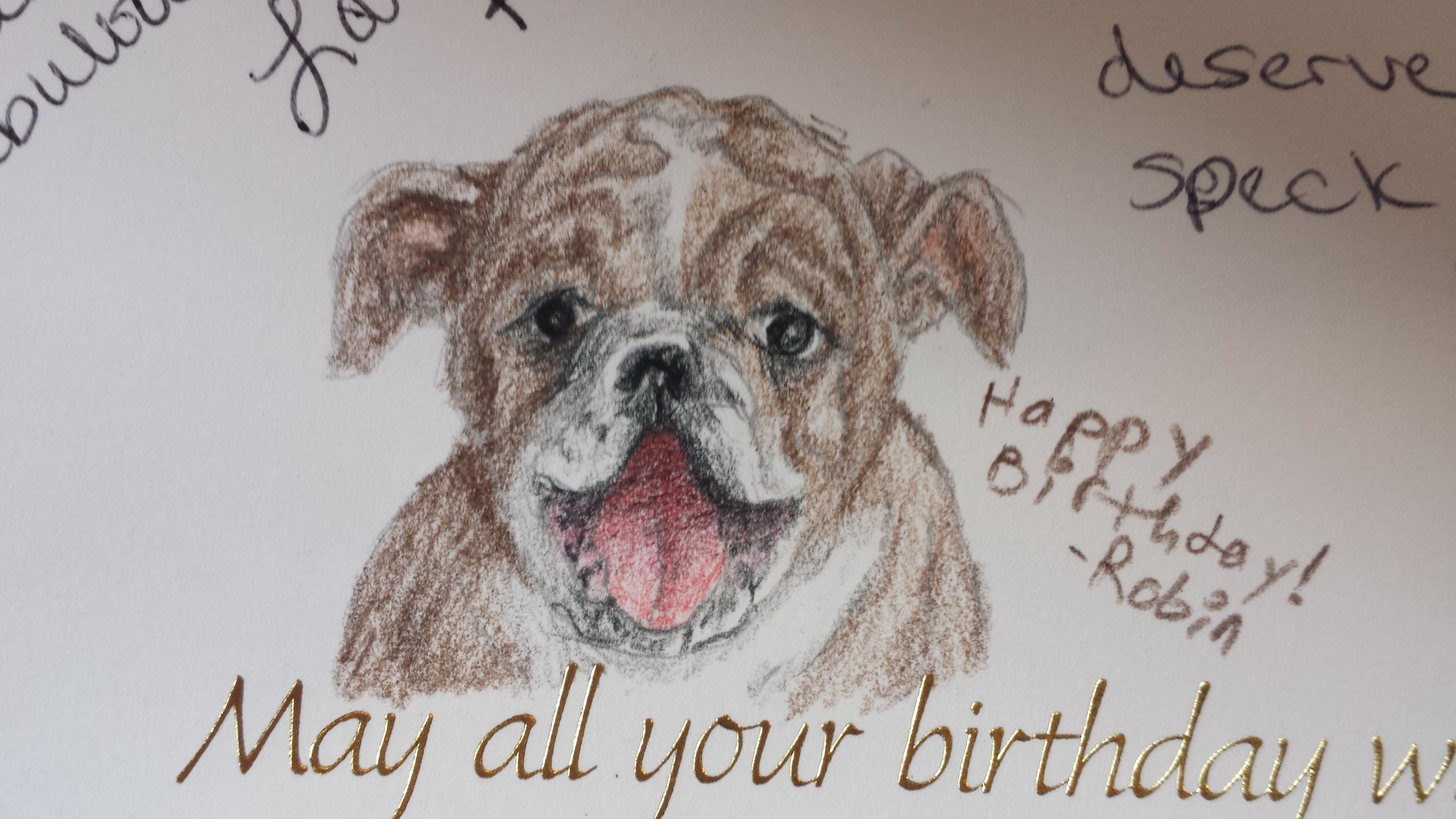 I hadn’t pulled out my Prismas for years, but I enjoyed it so much even just on that little sketch that I decided I will combine watercolor pencil and Prisma on that picture of Quatre and Trowa. Mostle’s done that, but I never have; it should be interesting, at least.

Recordings — I finished the gross editing on Seeing Red in its entirety and on First Kiss. Have I mentioned that I freaking love Seeing Red? I love the whole HoHniverse to pieces, to be honest, but that story in particular just makes me so happy. And First Kiss is OK. It’s not spectacular, but I like it pretty well.

I’ve also made some decent progress fine-editing some recordings of Saitou and Sano stories. Do you know how often I switch proper nouns around? It’s not just Sano and Saitou, but those are overwhelmingly the most common. And I’m still in no state to rerecord the bits where I messed that up.

(These things weren’t actually this weekend, but I’ve been off the radar for a month so I thought I’d mention them).

Yeah, so, I eventually decided to give actual recording an attempt, and I did manage to get all the way through Substantiated, which I judged to be an OK story (though less OK than First Kiss). By the end I was pretty hoarse and sore, but it was promising… only then, a couple of days later, yet another sore-throat/loss-of-voice wave hit me and is still in ascendancy. I came up with a theory recently: that I’ll remain sick until I manage to see the two new RK movies. THANK POE we have a DVD release date on KTH. But let me not stray off topic.

Actually, that’s all I have to say. Week ahoy!