Snacks this weekend have OBVIOUSLY been lots of candy, because Halloween is AWESOME like that. Playlist has been the same as before (all soundtracks, pirated stuff, etc.).

La Confrérie de la Lune Révéré — Part 59 had a sort of peak. As I was working upward in the first half of the part, I was convinced that I was going to need to add an extra part after it. Then I hit about the halfway point and started on the downhill run, and became less and less convinced, until by the time I’d reached linear completion and was editing I’d almost completely made up my mind to keep things the way I’d originally planned. And by the time I was done editing I had indeed decided that way. Weird, huh? So, 60 parts is the final answer, though that, of course, may change with later editing.

I’ll probably put the ebooks up pretty soon after the story’s finished (two ebook versions, one with just Confrérie and one with Guest Room Soap Opera and Consummate Timing in there as well) and wait a few months to do full-story editing, since I need some distance before I’ll be able to assess the overall effect. Man, it sure will feel good to be done with this story on Sunday!

So the next question is, of course, what next? Obviously I don’t have to limit myself to a single project, but I’ve come to accept the fact that I only exist on weekends anymore and can’t really spread myself over many writing projects at a time. Some things I’m eying are my Aku Soku Zan(za) rewrite; actually keeping up with my Saitou and Sano goal of a short story every month; finishing up some of these short GW fics I have kicking around; another GW faery tale called Soulless Ocean (three guesses which faery tale the main story is); any number of long ideas about Saitou and Sano that I haven’t started, particularly my Kaorugumi fic; and of course getting progress made on unfinished longer RK stuff like Blood Contingency and Heretic’s Reward.

And I really should work on TLY. This is an original series I haven’t mentioned here since I haven’t worked on it at all since I started these productivity logs. My big stumbling block there at this point is a certain haziness to the end of the first book; it’s difficult to lead up to and plan for an ending you’re not certain about.

There are also a bunch of HoH stories planned, several of which are even in progress, but I will probably not give them much attention for a while as I step back from Confrérie. I do really, really love my HoH universe, though.

So what’s next? I don’t know. I guess we’ll at least start to see in two weeks. 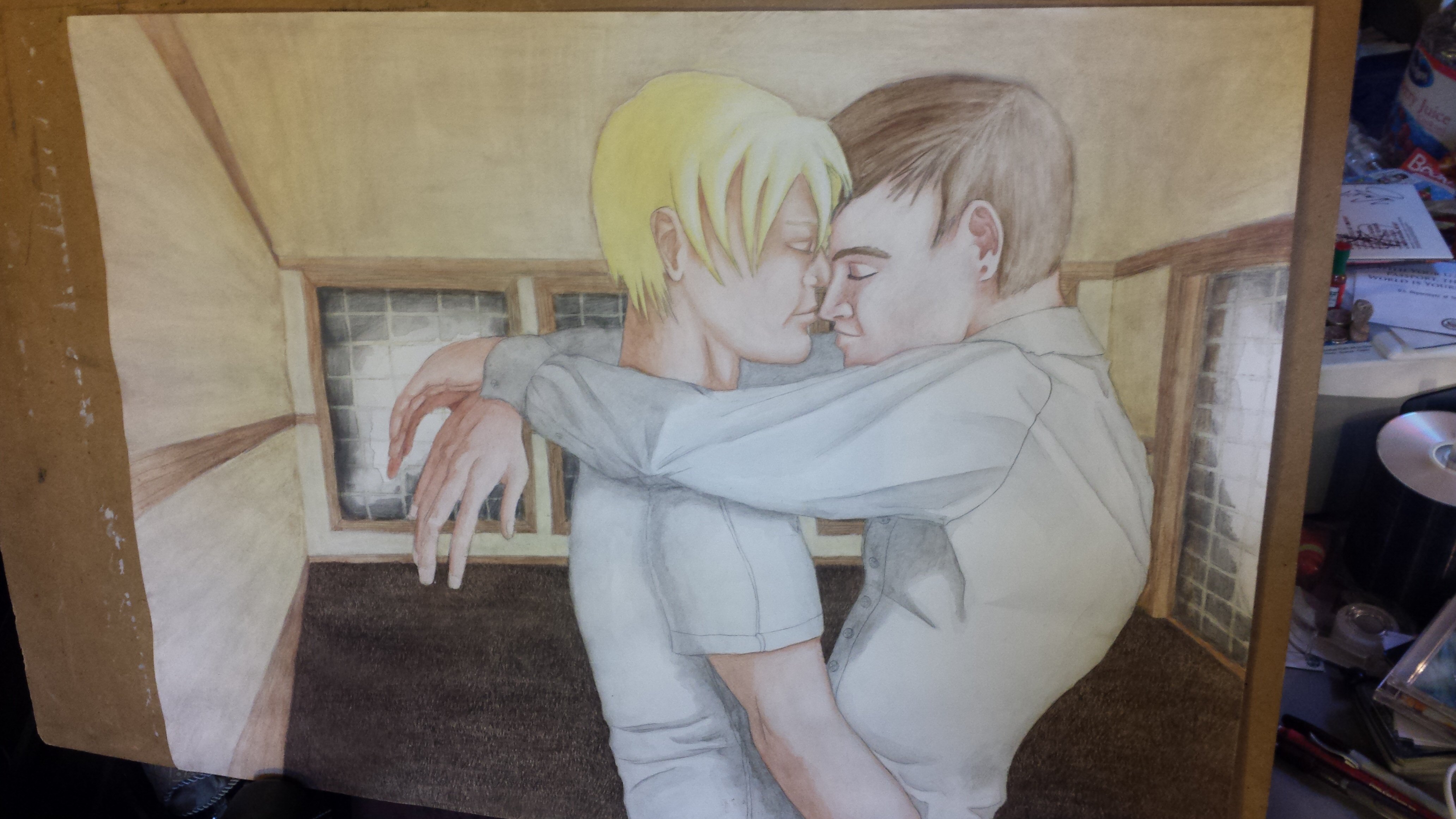 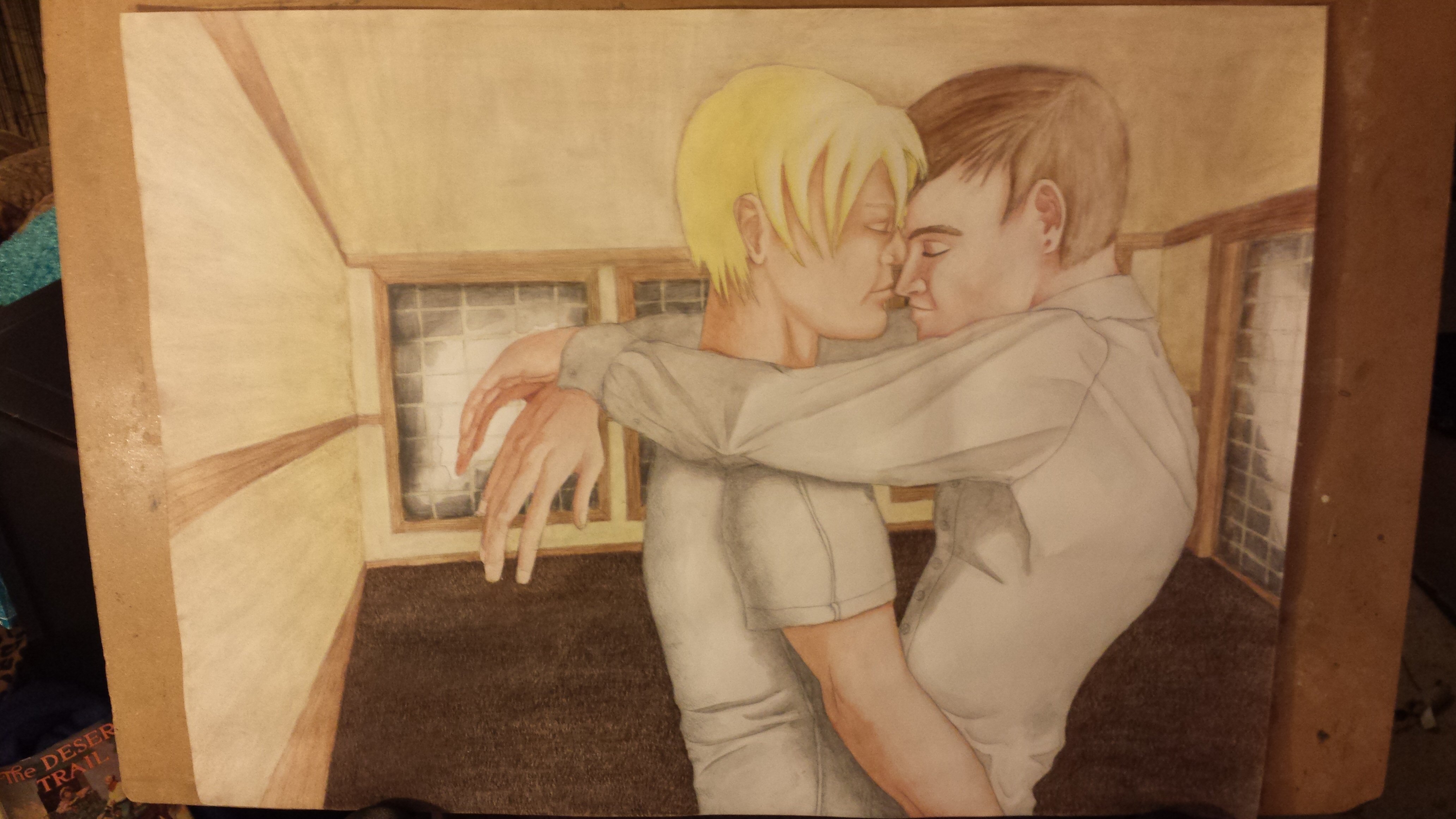 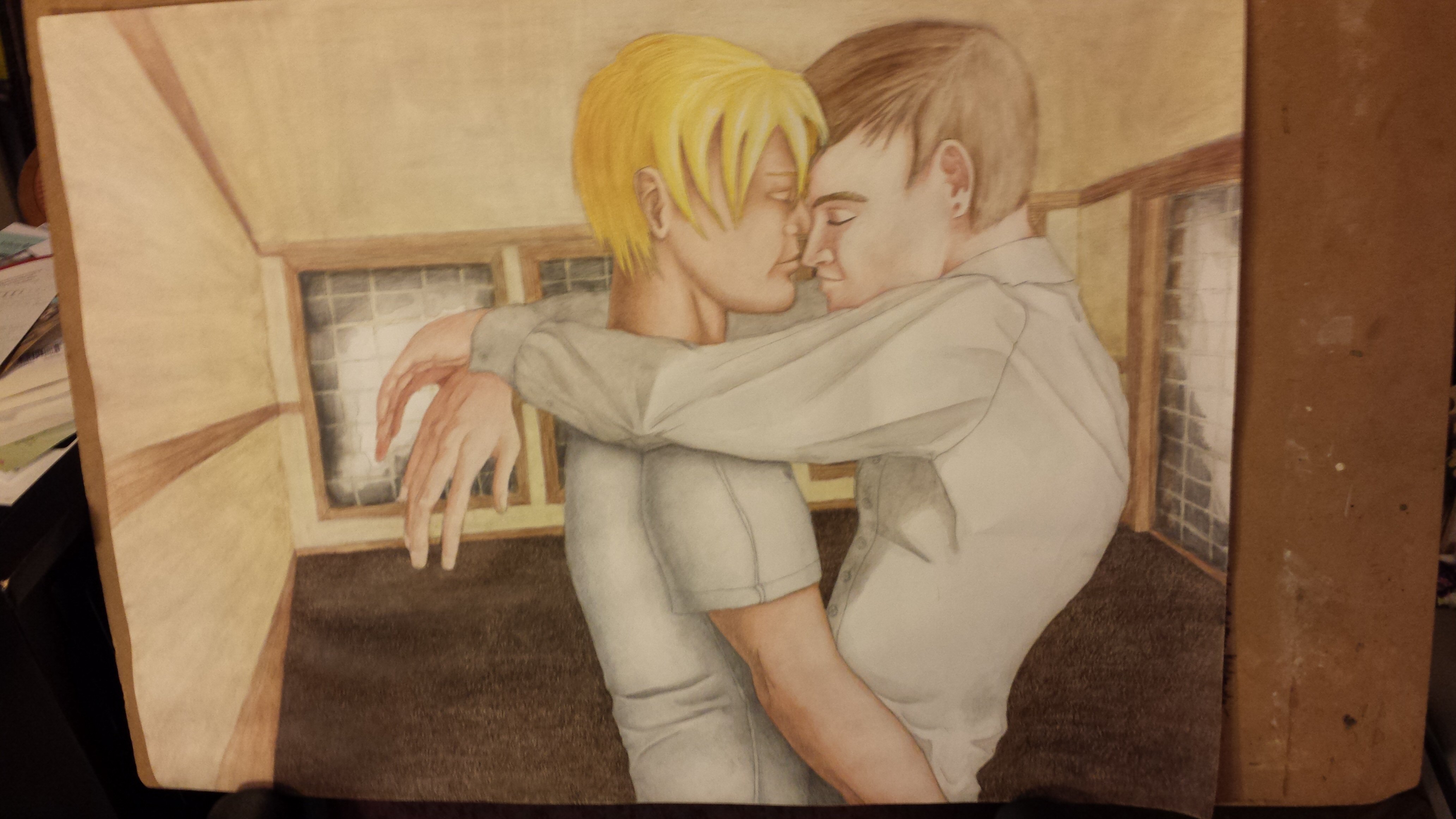 You kinda can’t see the changes in those images (and different angles that totally alter the light don’t help XD), but I’ve finished up the watercolor pencil stage and started in on the Prismas.

Aaaaaaaand I have remembered in full the reason I haven’t used Prismacolors in so damn long. I need a nice sharp point on a pencil for it to be much use, right? So I go to sharpen it. But it turns out the lead (or whatever you want to call it) inside the pencil is broken into a million small pieces. So I sharpen a bit, and the lead falls out. So I sharpen a bit more, and the lead falls out. Repeat AD CAEDIS. I started a brand new, flat-topped, completely unsharpened pencil today, and had to sharpen it down to THREE INCHES LONG before I managed to come up with a workable point.

This was ever the case with Prismas, but I had repressed the memory. Today it’s all come rushing back to me. I do kinda like the effect of Prisma on top of watercolor pencil, especially since I’m required to put so much less Prisma color down (and worry so much less about consistency XD) to get an expanse of color, BUT SERIOUSLY. I’m officially done with Prismas. And by that I mean I’ll keep the ones I have and possibly use them up if I can handle it without going completely crazy, but I won’t buy any more. Watercolor pencil it is from here on out… at least as far as colored pencil is concerned.

Sano’s Badass Adventure — I am super pleased with myself this weekend, because I figured out a thing that wasn’t working that had been bugging me for forevaaar. I’m almost finished with the initial happenings in Ikkinzome’s second scenario. The secondary happenings (i.e. when you come back with Saitou the next night) are not started yet, but soon I will be able to start thems. And it helps that I figured that one thing out. I am happy.