I haven’t had much in the way of snacks this weekend, and the playlist has been the same as before. (It’s still got four thousand tracks left, so I’ll probably be with this one for a while XD) One thing that might count as a snack, though, is the Scentsy scent I have going lately that is some kind of butterscotch/maple smell. IT SMELLS SO DAMN GOOD it seriously makes me want to cry ZOMFG SERIOUSLY YOU GAIZ. Anyway, I shall talk about stuff.

La Confrérie de la Lune Révéré — It’s done! So this last part, as I was 90% sure it would, feels like an epilogue rather than a chapter. The problem is that I’ve set prologue protocol in this series at a “Part 0” label rather than “Prologue,” and therefore can’t quite decide how an epilogue should be labeled. I was joking with my family that maybe I should start counting backwards for an epilogue, and this one should therefore be a second “Part 58.”

I do think it might be kinda cool to call it “Part 0²,” though. That’s really gimmicky, but I might prefer it to having it (as I feel) incorrectly labeled as a normal chapter. I will have to think about it. 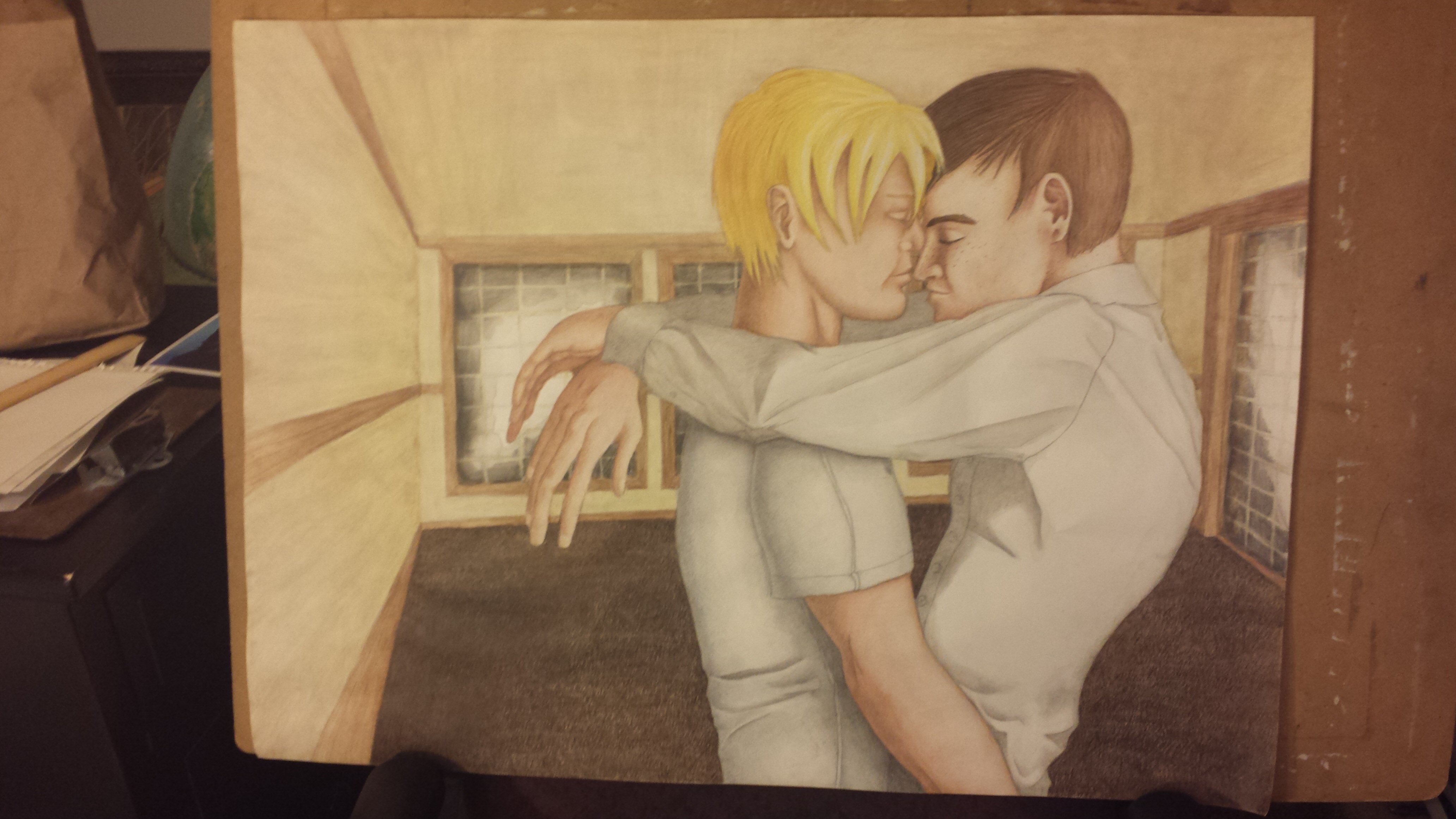 You can kinda almost see Trowa’s freckles now. Damn, freckles are hard to draw in any medium. We’ll see what happens with them next weekend, and if they improve.

I’m not entirely happy with the shading I did on Trowa’s hair, but it’s too late to take it back now. Ah, well.

He Can Be Taught recording — I’ve worked on this a lot this weekend (rather in place of SBA, which I haven’t touched). Since I rewrote it last year, HCBT has become one of my absolute favorites among my own stories (if you were to ask me what my #1 favorite story of my own is, I couldn’t begin to tell you), and because of that I’ve been giving its recording far more attention than that of any other long story.

A lot of the fine editing is done, and I think the whole thing is a pretty decent recording, though I really freaking need to learn to reread entire sentences, not just clauses, when I misspeak, since I have a tendency to slur together the words of adjacent clauses. Also I’d kinda like to redo Yahiko’s dialogue at some parts, since his voice slipped.

Buuuuut right now I can’t record at all; my voice is still stupid, and every time I think it might be coming back for real, it gives out on me again. I keep running across lines I need to rerecord — most frequently because I said “Sano” instead of “Saitou” or vise versa — and I can’t do a damn thing about it.
*sigh*

In-Law — Last Monday, after I’d posted my productivity log and figured I was done getting anything serious done for the weekend, I opened up some in-progress stories about Saitou and Sano just to have a look at them and think about Saitou and Sano and how much I love them. Then all of a sudden I realized I needed to take a shower, and rushed off to do that lest I run out of time and stay up too late.

The last story I looked at before my shower was In-Law, and, what do you know? In the shower — which is, naturally, where I, like many people, tend to get a lot of good ideas just when I can’t write them down — I got all inspired for In-Law. Then of course I was up late because I had to write it all out when I emerged, but I wasn’t annoyed because the result was that the story was almost finished.

This weekend I have completely finished it (I say that as if it’s long or something XD), and will set it up to post tomorrow, since I have an inexplicable allergy to posting more than once in a day if I can help it. It’s another story about Saitou and Sano that isn’t mostly about Saitou and Sano, and it’s definitely short, but I think it’s pretty cute, and it counts toward my goal of posting something about Saitou and Sano every month — meaning I’m not missing November after all!!!! Congratulate me.