You’ll know it when you get here, if you haven’t lost your mind

On Monday my parents and brother and I will fly to Orlando, where we will meet Pookster and her husband and three kids (one of whom I have never met in person before). The purpose of this trip is to hang out with them and visit Disney World, but I felt I couldn’t bring myself to be in such close proximity to the Harry Potter items at Universal Studios Orlando and not go there as well. So on Tuesday, brother and I will do that (and report to my parents whether they would like it enough that they should drop Disney World for one day and go to Universal Studios instead), then hit Disney World on Wednesday, Thursday, and Friday.

I have never been to Disney World, but, as everyone knows, I love Disneyland to the extent where my subconscious obsessively presents it in my dreams on a regular basis. So the long and short of this is that I’m so damn excited and impatient for this trip that I can’t do anything else. Writing is not working; SBA is not working; nothing is working. I’m totally unproductive, so I’m finally getting around to posting some personal journal entry stuff that I’ve been too lazy to post for months or something.

I think I’ll put this all behind a link. Get ready for lots of pictures of me.

So. My hair has never been willing to hold a curl for longer than a couple of hours, which I’ve always been a little sad about because I think curls would be super cute. One day, when I’d gotten out of the shower and done nothing but towel-dry my hair, it looked vaguely curly, and I was lamenting to my mother about how cute I thought my hair would be in curls. She remarked that it might also be cute in cornrows. That idea bit me like a buggy bug, and I couldn’t stop thinking about it, and this was the eventual result: 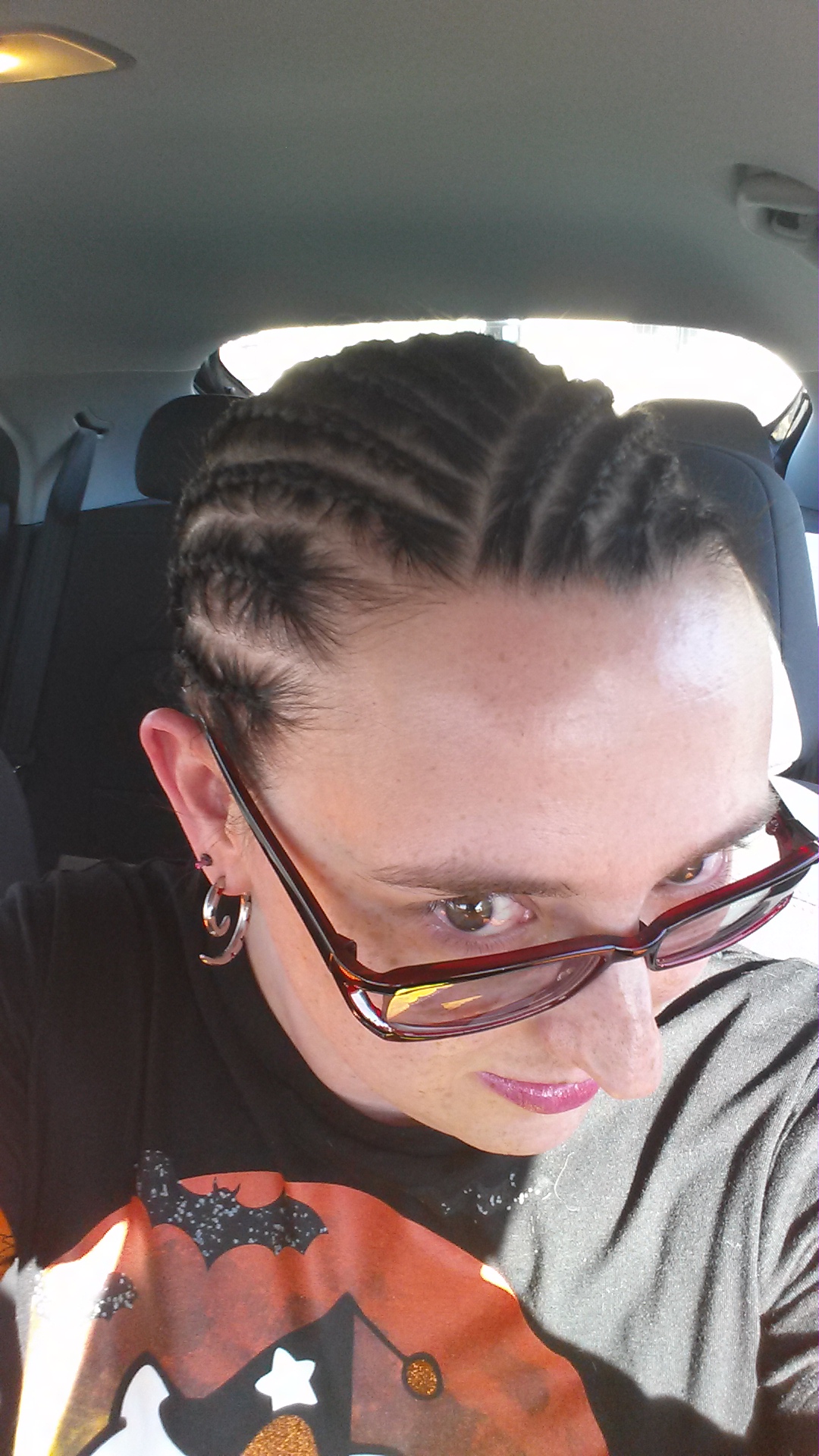 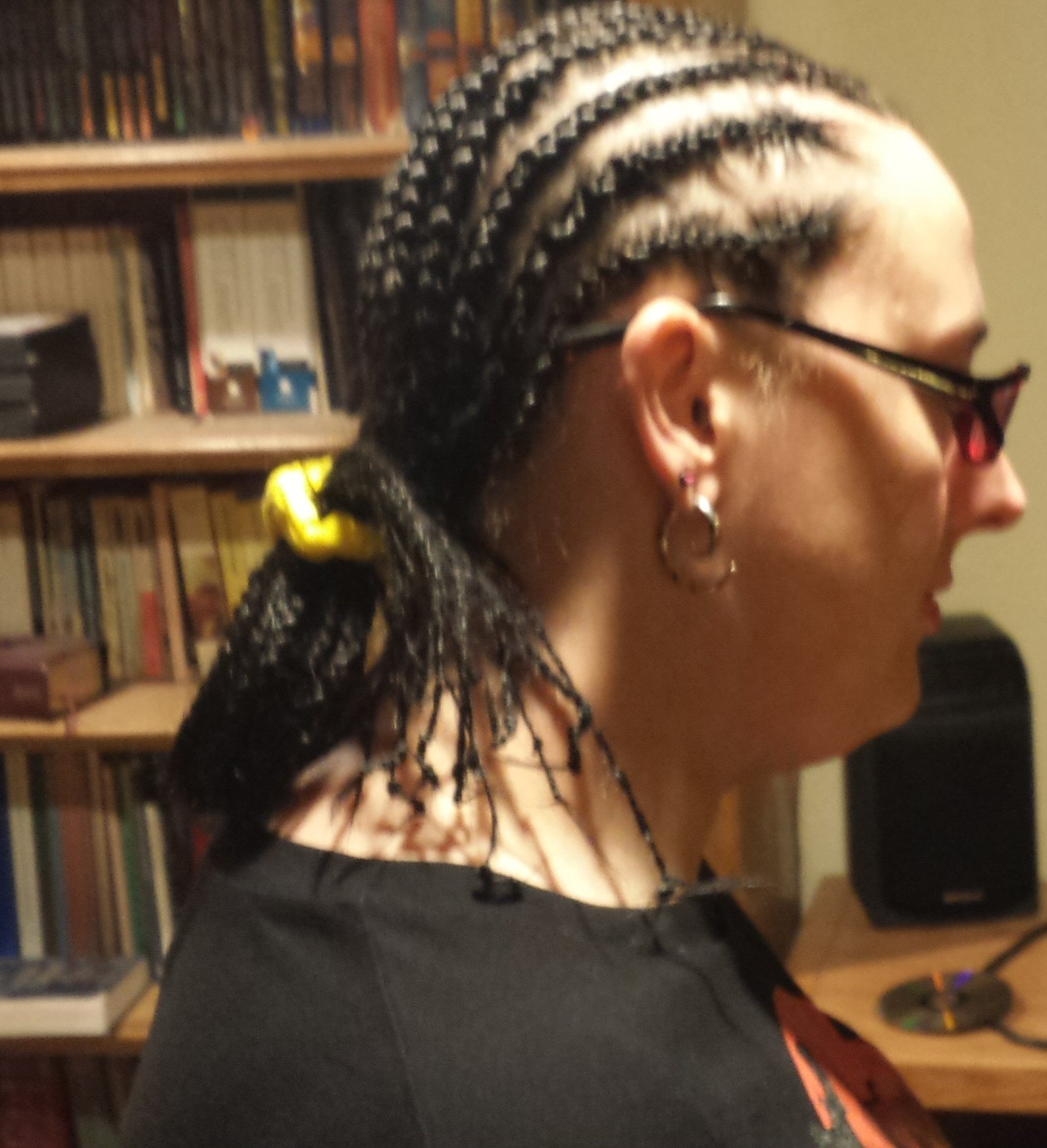 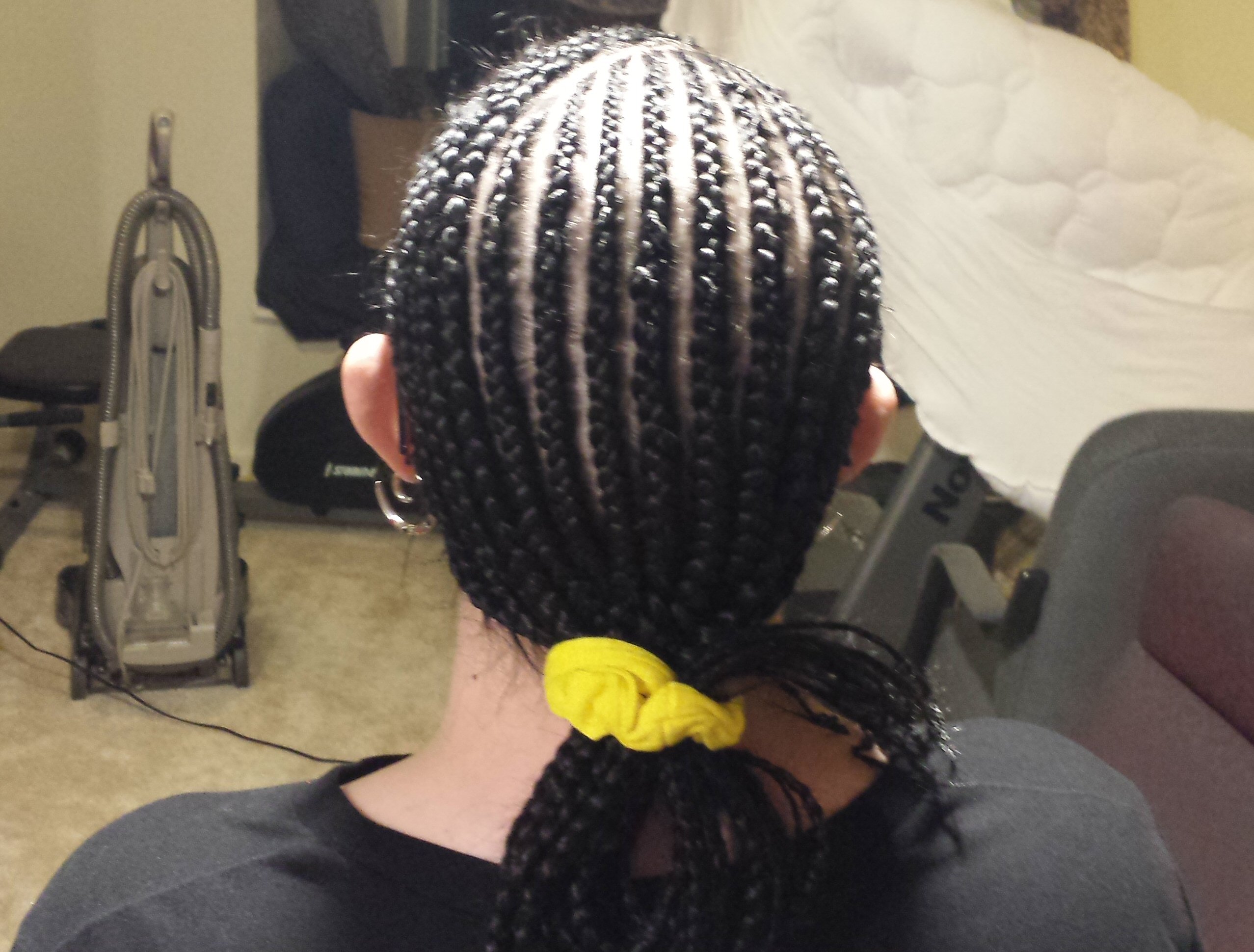 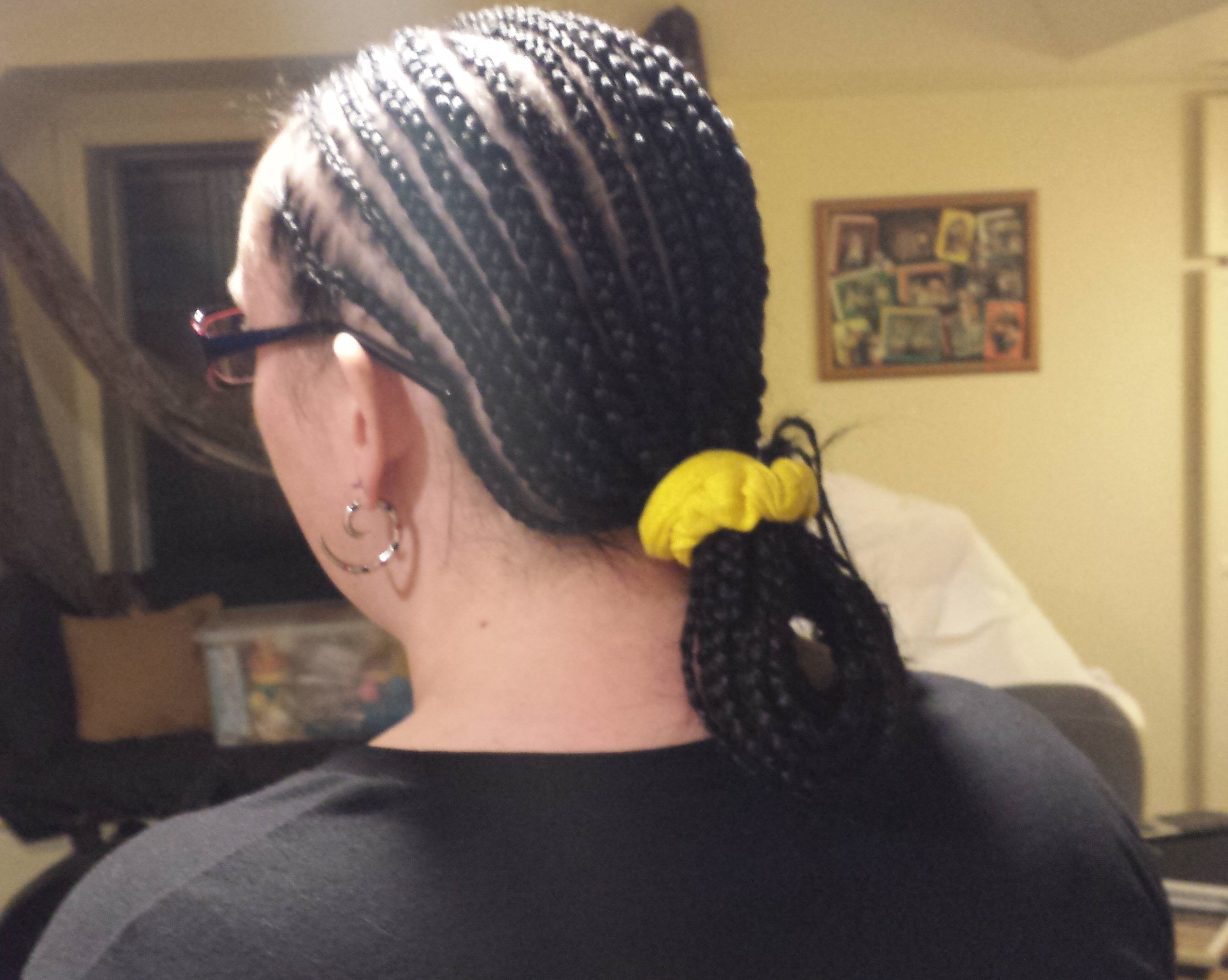 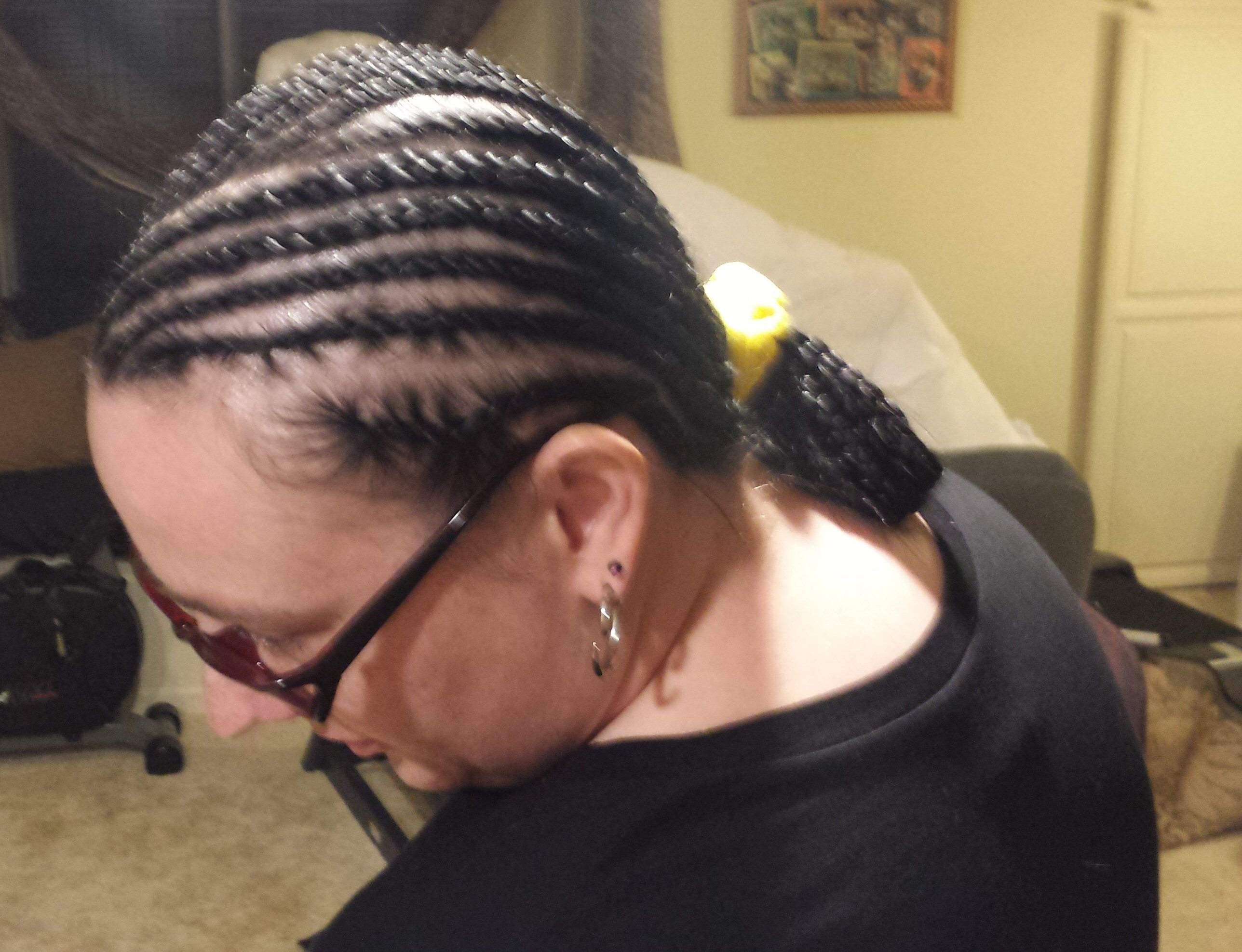 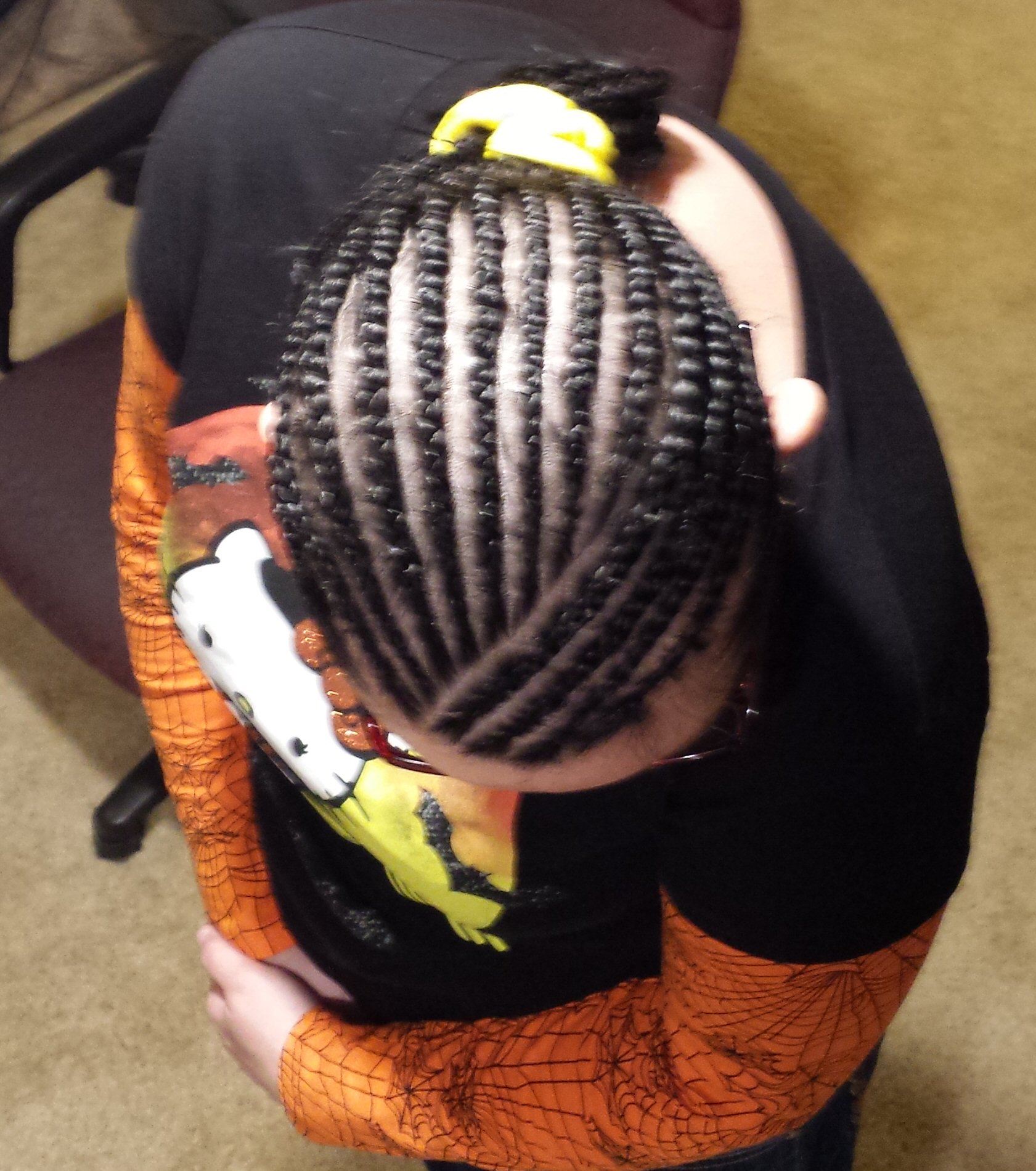 I had them in for just over three weeks, and I loved every minute of it. It was a little too expensive to do routinely, but I’ll definitely do it again at some point because it was so great. It took less than two hours for the stylist to put them in, and about four hours for me to get them all out. And my hair was so deliciously fluffy after I’d taken them out; it felt downright criminal to wash it so it flattened out again. 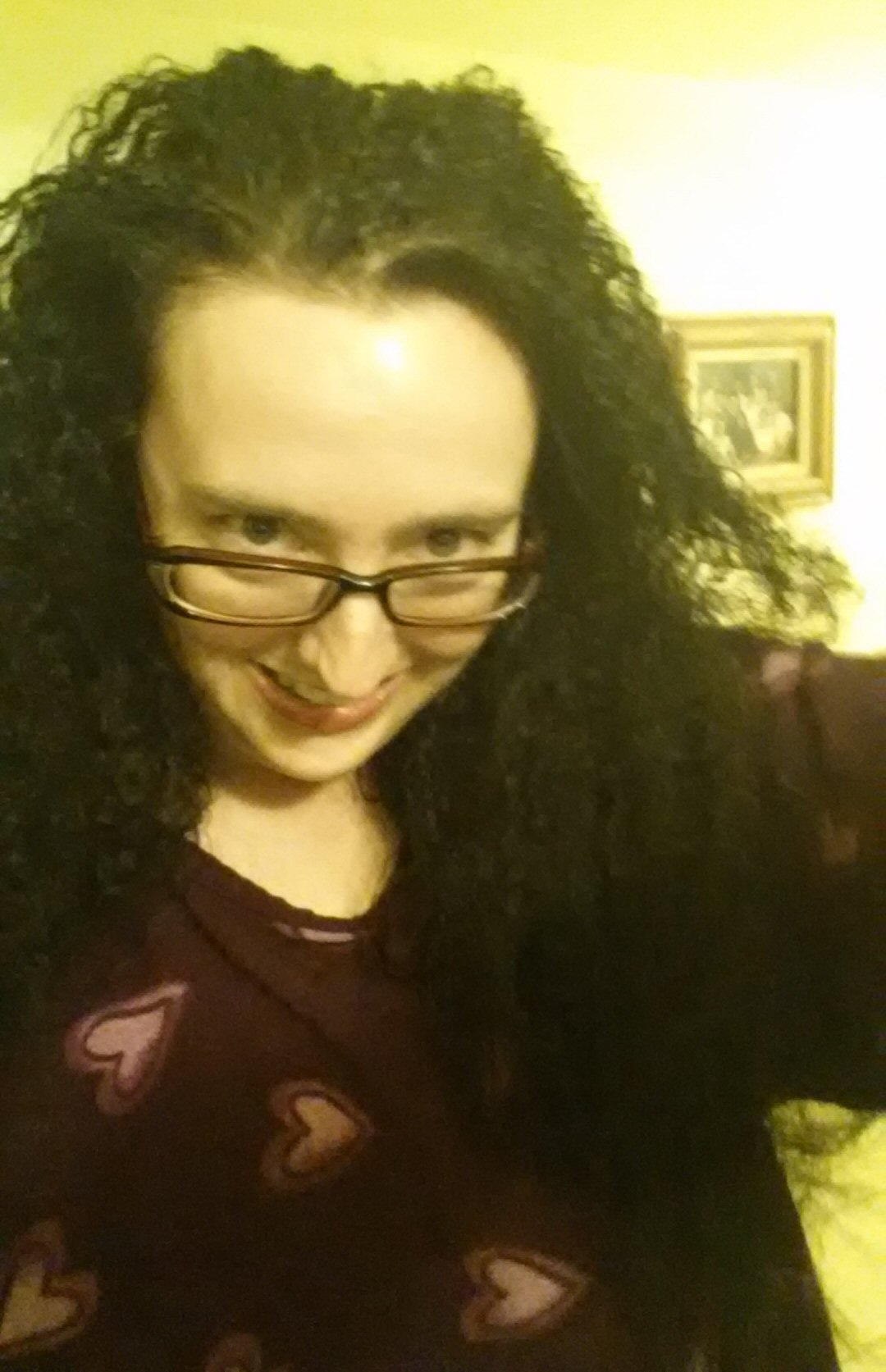 This picture doesn’t actually convey its fluffiness very well; I wish I’d had someone get a shot of the back. It was so fluffy that I didn’t even need a pillow to sleep on. Srsly.

OK, that’s the end of the cornrow story.

Of course ever since Zombie Girl moved to Ingulland, she and I have been hoping I could go out there and visit her. I obtained a passport back in February or somesuch, and have been saving money and waiting ever since then for plane ticket prices to drop to what I considered a reasonable amount. Well, finally they did (very briefly; you’d better believe I jumped the hell right on that), and I’m headed across the Atlantic in January! She and I will talk a freaking lot and look at touristy stuff and it will be AWESOME. Do miss Zombie Girl.

So far we’ve bought a bazillion train tickets and hotel rooms, as well as a tour out to Stonehenge from Bath and a tour of the Roman baths in Bath. Other plans include the British Museum (we’ve set aside a whole day for that), two castles, and some other random crap. I will start counting down to this after the Kyoto Taika Hen DVD comes out, which is the countdown that comes after the Disney World countdown ends in 1 day, 7 hours, 55 minutes, and 43 seconds (at time of writing).

The Densetsu no Saigo Hen DVD release date is actually during my England trip, so that can be included in the England countdown. It’s somewhat disappointing that it’s coming out when it is, because I was hoping ZG and I could watch all three movies together. As it is, we may just watch the first one, since it seems like KTH and DnSH shouldn’t be separated. But we’ll see.

I didn’t bother getting a costume for Halloween this year because I was at work for most of the day, but I did get some cute Halloween scrub tops. I only took a picture of one of them, but you can at least see that one: 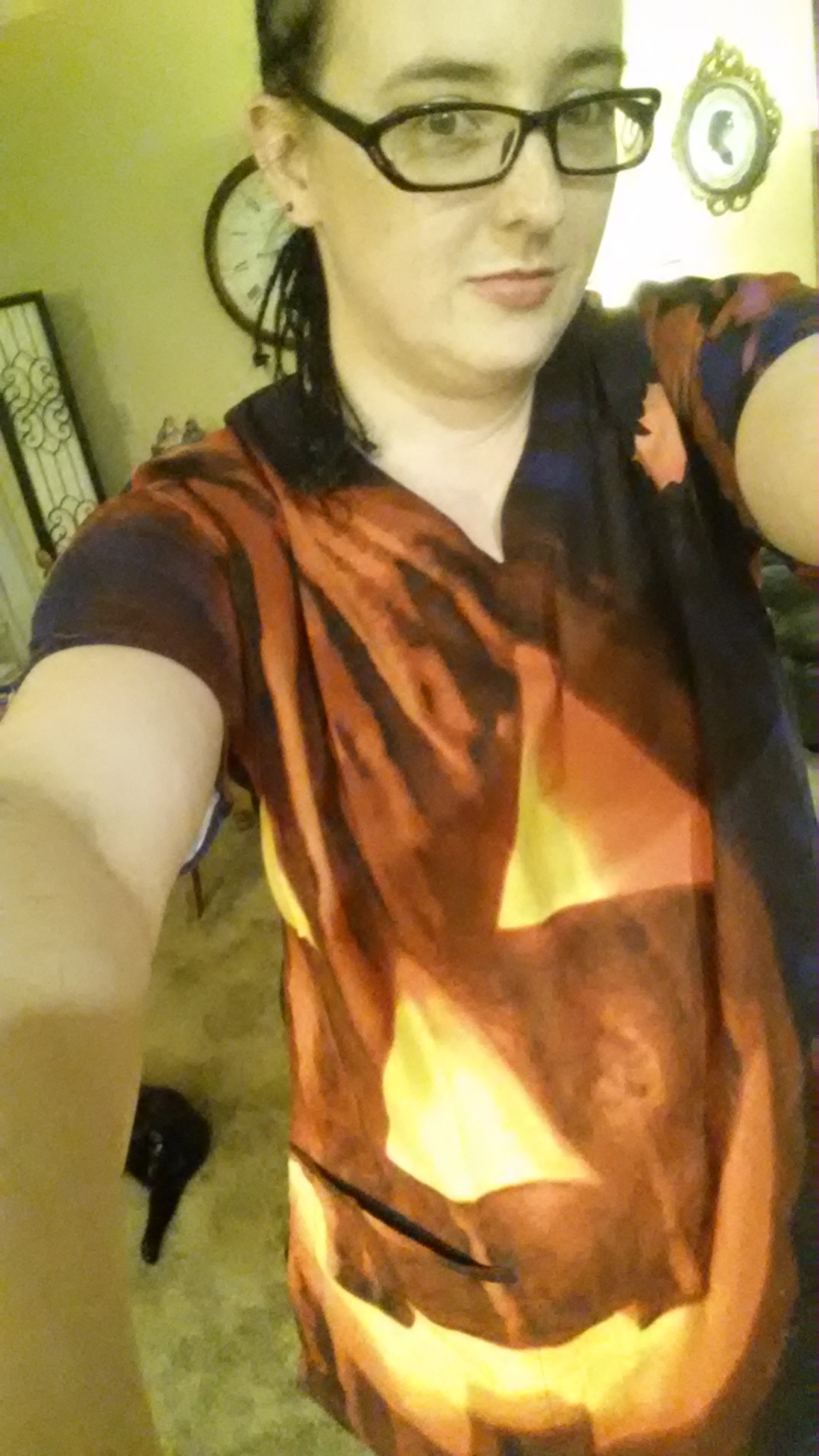 And some other recent pictures of me and my clothing because why not. 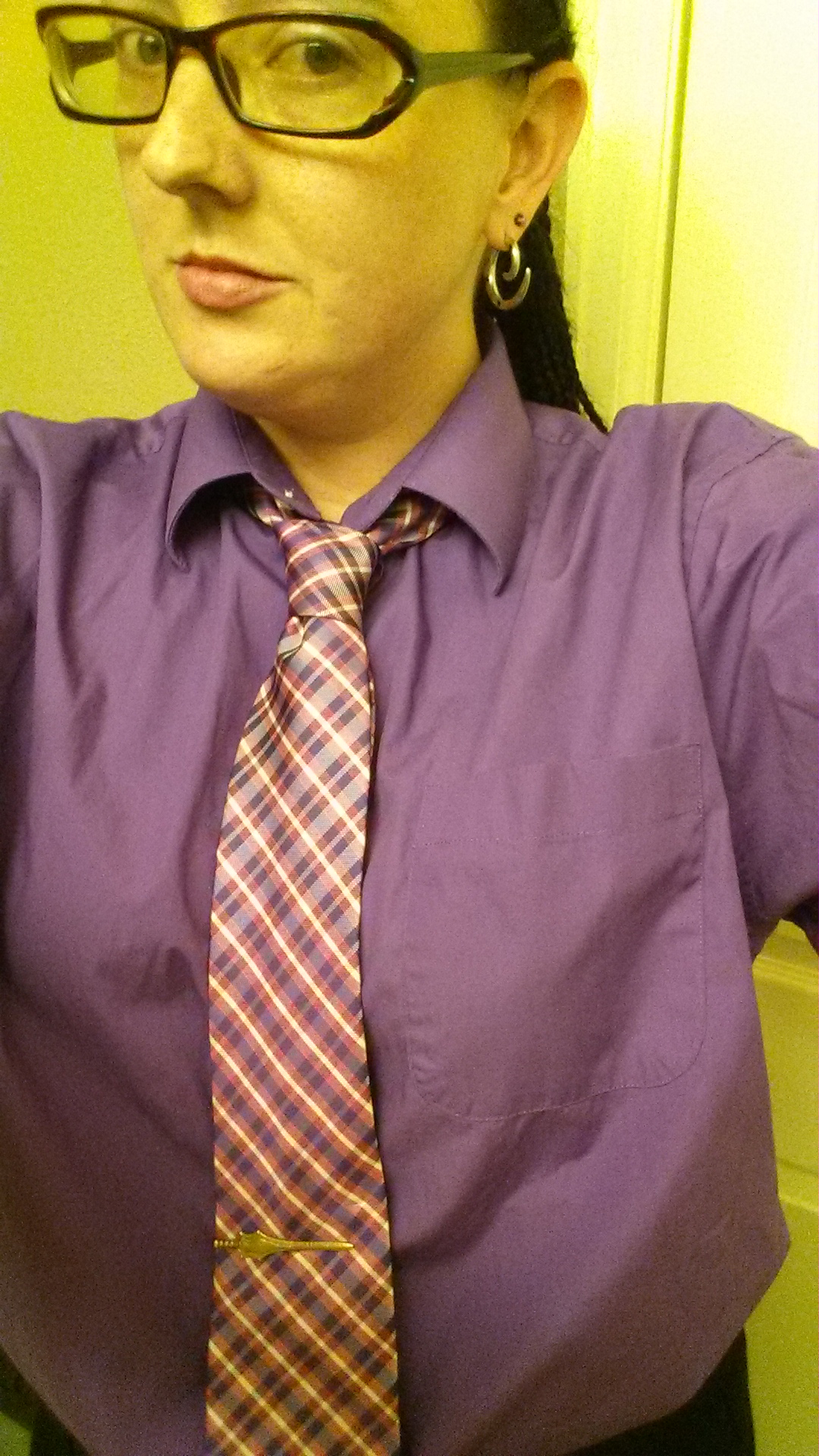 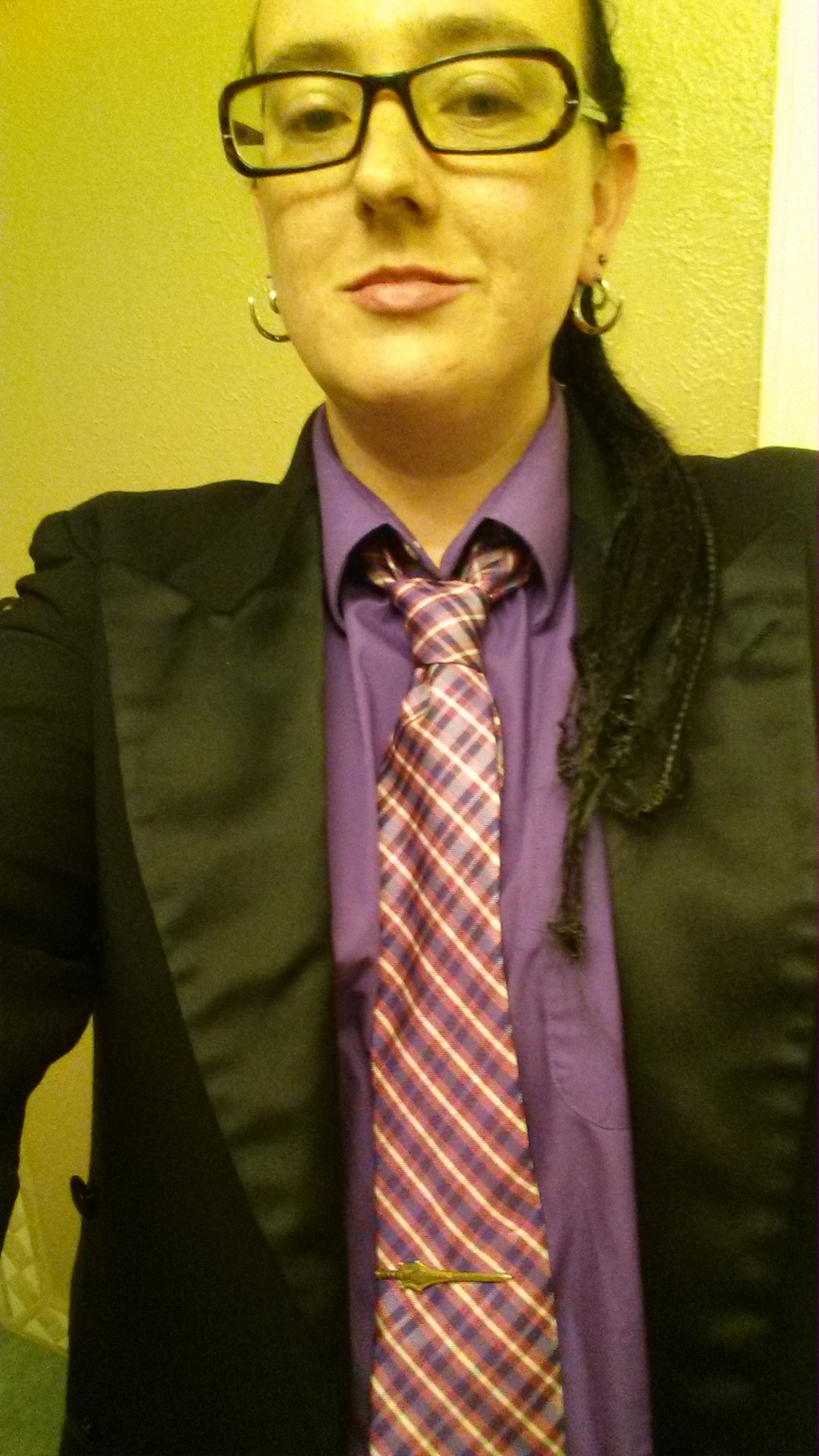 That tie and that shirt just looked so good together that I had to take some selfies.

I can’t decide what to pack for next week. It’s supposed to be the high 70’s in Orlando while we’re there, and that’s a little warm for ties, which I tend to wear only for half the year… but ties always make for such good pictures; I love looking back at vacation photos of mahself in ties. And if I don’t go for ties, then what? Nerd t-shirts? Blouses? Ugh, why do I have to think about this.

Mostle and Jakebii were here for Thanksgiving, and that was great. We wanted so much for them to go to Disney World as well, and have a whole-family reunion and enjoy a week of taking pictures with princesses and such together, but they couldn’t make it work with their budget no matter how hard they tried. But at least they came here for Thanksgiving! That was great.

The thought of getting pictures with princesses kinda makes me lean toward the ties even if it is going to be a little too warm. I’ma track down Tiana and Mulan and all the hot ladies and get pictures with them, and it’ll be so much more awesome if I’m wearing some amazing tie/shirt match in these pictures. Hmm.

I forget whether I’ve plugged My Custom Case. I have four custom phone cases from them at this time, and no plans of ceasing to buy more from them. They make lovely, good-quality products for a decent price. Here’s the one I recently ordered (mirror image flipped so as it show what it actually looks like): 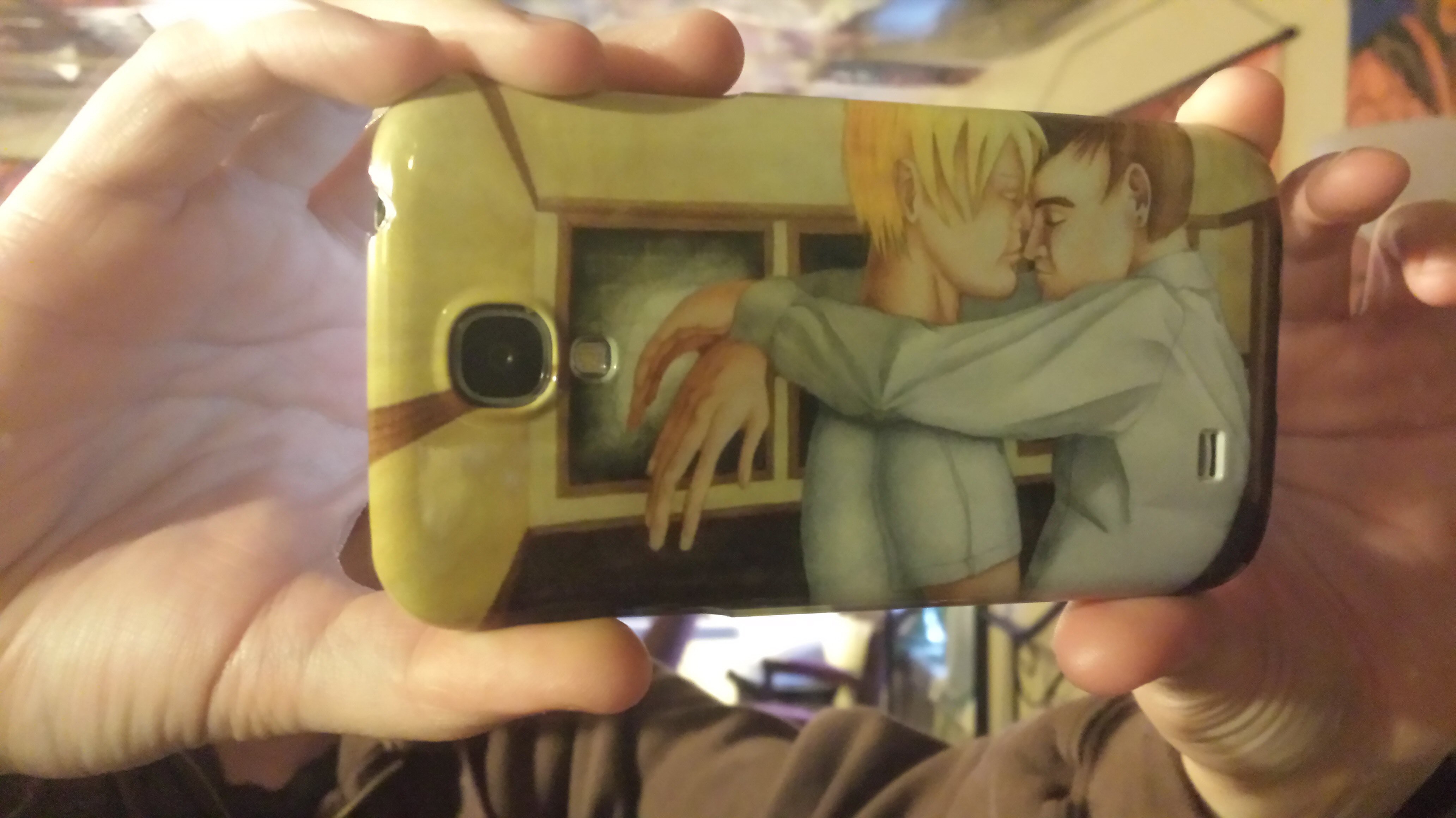 Anyone that’s read my productivity logs may recall that the reason I started drawing that picture in the first place was that I couldn’t find a picture of Quatre and Trowa that I liked well enough and that was the right shape and quality to use as a custom phone case. Obviously I was pleased enough with how my own picture turned out that I made it into a case. Now I need one of Duo and Heero; I haven’t started actively looking through the fanart of thems yet, but I bet it will be easier to find something than it was for Quatre and Trowa XD

OK, I’m just about decided on ties after all. Aargh, why is it still not Monday yetttttt. Let’s have some more photos.

Bread that is smaller than before, perhaps? 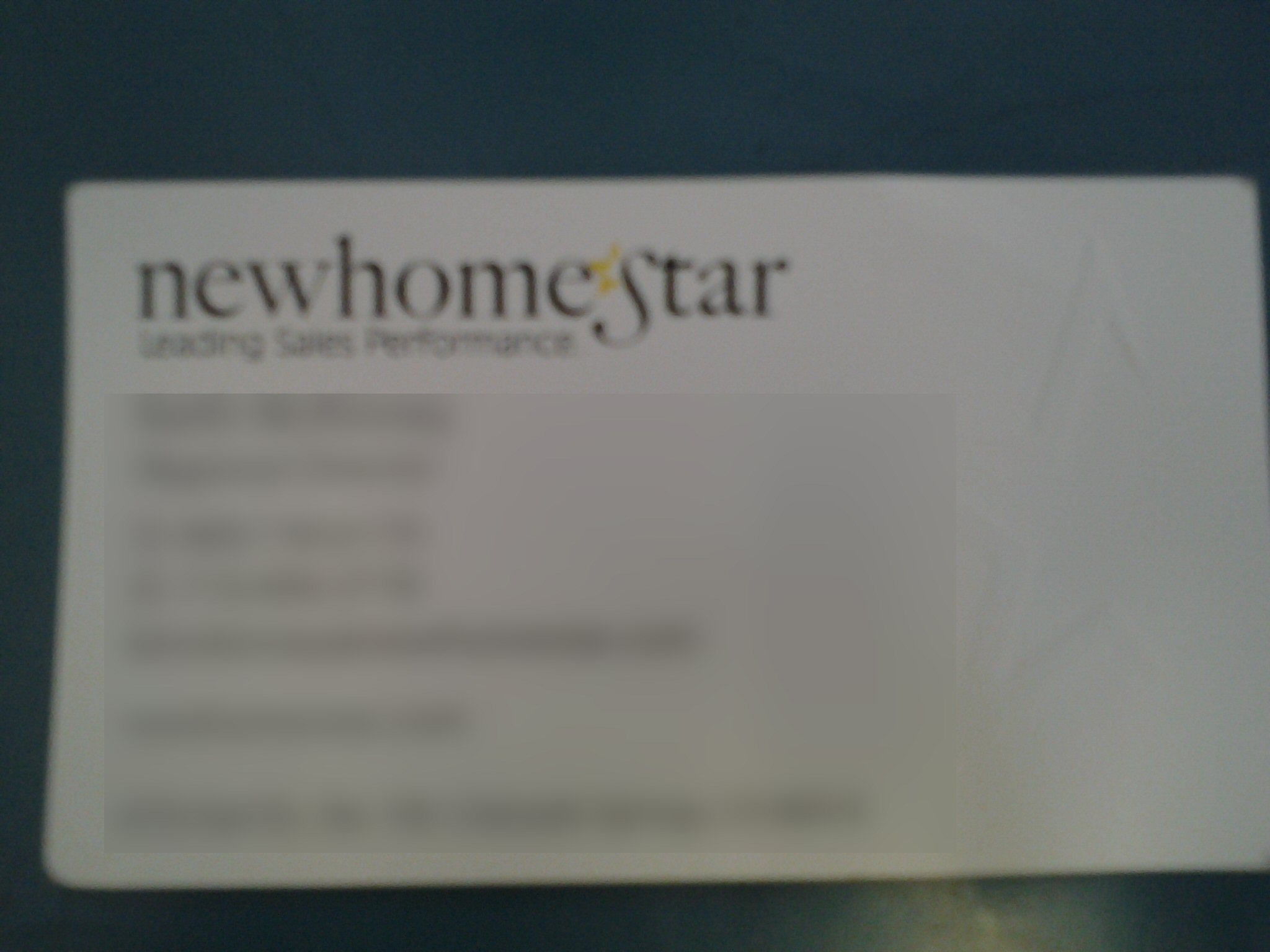 New HomeStar Leading Sales Performance — I represent Distinguished Businessman. Are you getting the lowest rates from your long distance provider? I can give you rates as low as anybody. Seriously. I don’t know what they are… but I probably could give them to you. Um, here’s one: BEEP. Haha, no, that was just me pressing the phone. Okay, it wasn’t even me pressing the phone, it was just me saying “BEEP.” Uhh, I can provide you with other stuff, too, like this pen on my desk… or, like, these Post-Its. This is great! Am I getting paid for this, really? 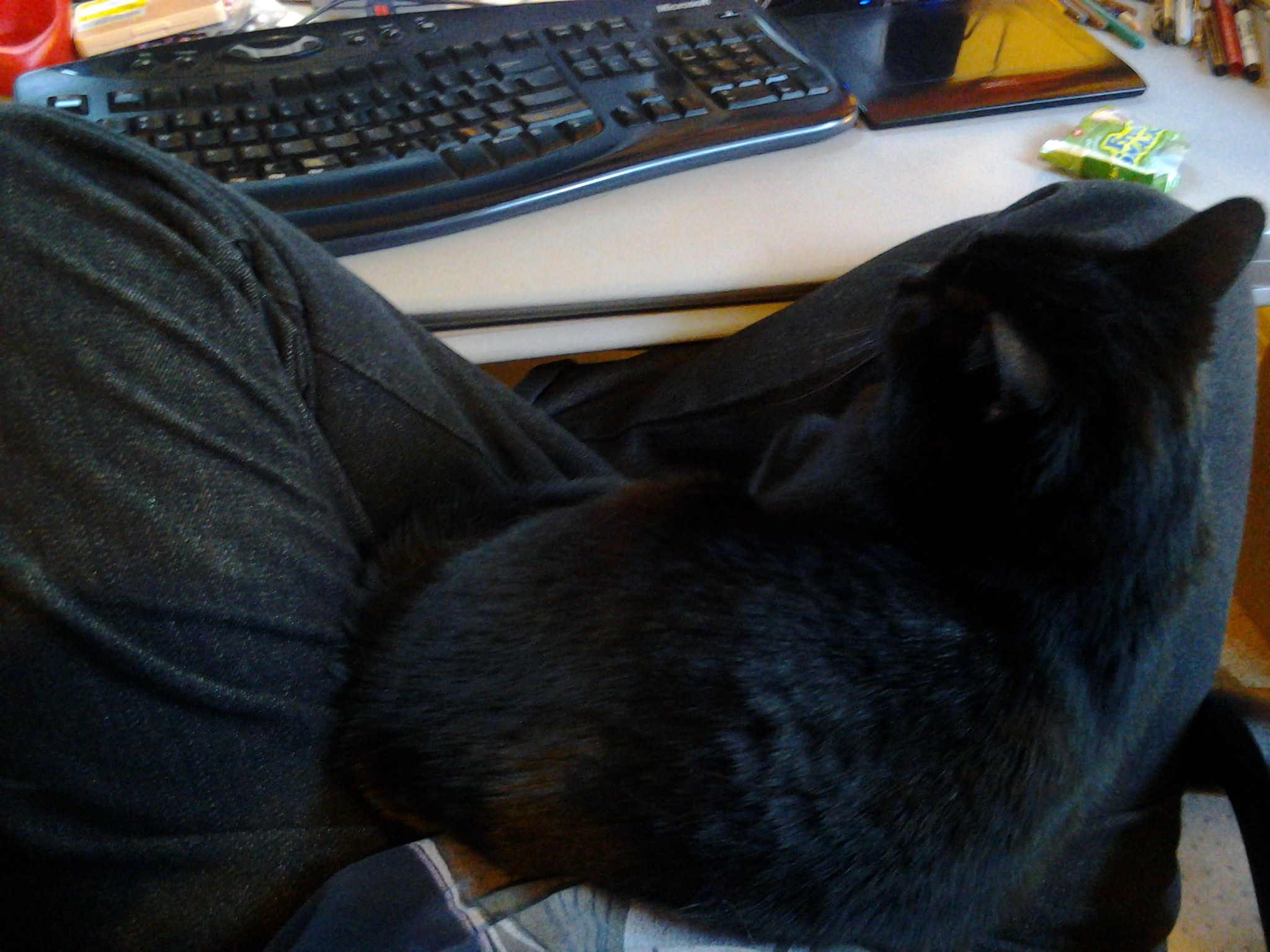 Aargh why still not Monday yet.