This weekend I’ve been finishing up with the same playlist as before (J-pop, Chely Wright, Sting/The Police). And my snacks have been delicious Valentine’s Day candy! This is just normal candy, but I bought it for Valentine’s Day. MmmmValentine’sDay.

So TLY. I mentioned before that I was lost for a bit on certain details of the ending of this first book. I’d written some of chapter 10 not having a clear idea of where I was going, and then when I did figure out exactly where I was going, I wasn’t sure what to do with what I’d written of chapter 10 XD Not that it needed to be completely changed — what I set up there is still useful with what I now have planned — but I had to figure out how to wrap it up appropriately.

So I was determined to finish chapter 10 on Saturday, and in order to get a running start at it, I listened to all previous chapters. Technically I could have readthrough edited all previous chapters, but I find that sometimes when I get into editing mode I get right out of new-writing mode. So I listened to all there was, and drew some item whilst doing so (more on that later).

Then, having achieved my running start, I did manage to finish chapter 10, which made me very pleased with myself. It will probably require heavy revision at a later time, but it’s done for now, so yay. And I got some work done on chapter 11 as well; what a productive day Saturday was! If I can keep up this trend, I might finish these books one of these decades!

Sunday was amazing too, actually. I started out working at random, and ended up on a story called Veritas that has become, miraculously, almost finished! Sometime in the next few weeks I should be able to finish that up and actually post it; how awesome is that?? It’s funny, and kinda sweet, and will be another one of those canon-GW-setting stories that does its best to ignore the canon GW setting as much as it can XD

The last third of Sunday and most of today has been SBA times. The thing I mentioned that I drew on Saturday was Kaoru’s dialogue portrait, which you can see here– 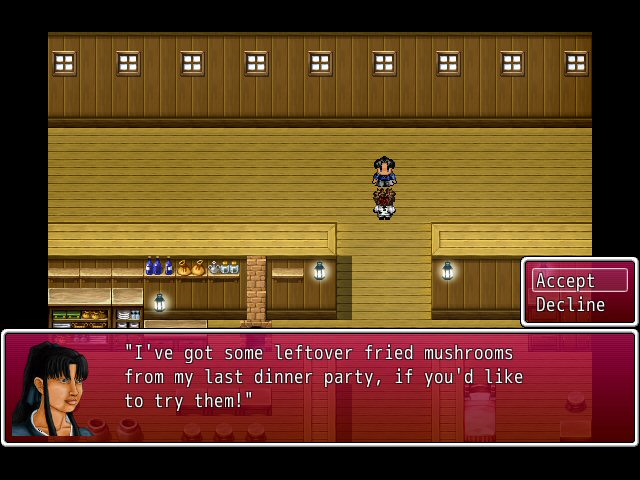 –but honestly the more I look at it, the less I like it XD Anyway, I also made icons for a bunch of items that didn’t have icons yet, and that’s great… but, man, pixelwork is hard. When I move on to less experimenty games, making my own pixel art is going to be the most difficult thing about the projects.

I’ve been working on Ikkinzome’s scenario again, specifically the aftermath where you join up with Saitou to deal with Ikkinzome after the night patrol is over. That’s almost completely done now, and I’m into that endless playtest-and-tweak stage. Today I’ve also added an autosave feature and fixed up some old stuff.

So it’s been a great weekend. I’m glad to be getting back into the swing of things after my vacation kinda ate my life for a while. Here’s to more productivity next time as well!