Lately I’ve been itching to start doing productivity logs again, but the problem is that logging this shit is very unproductive and therefore not something I do if I’m busy with actual productivity. So I’ma start typing this up, and hopefully work on it as I work on real things, and then we’ll see when it gets posted.

So obviously I made a homemade soundtrack, but, to be honest, I did most of the work on that in 2014 XD Actually I may have started it in 2013; I forget. Anyway, it’s done now, and I’m happy about it. Next movie will probably be The Court Jester. Yes, I love Danny Kaye.

Sano’s Badass Adventure — I’ve done quite a bit of work on this lately. The part of Saitou’s quest I’m on at the moment is a little tedious, so I’ve been bouncing around from that to other bits… I’ve started working on Aoshi’s quest; the intro scene (where he recruits you under normal circumstances) is finished, and, boy, did test-playing that with every possible combination of party members (spoiler alert: I didn’t actually test it with every possible combination of party members) get boring. 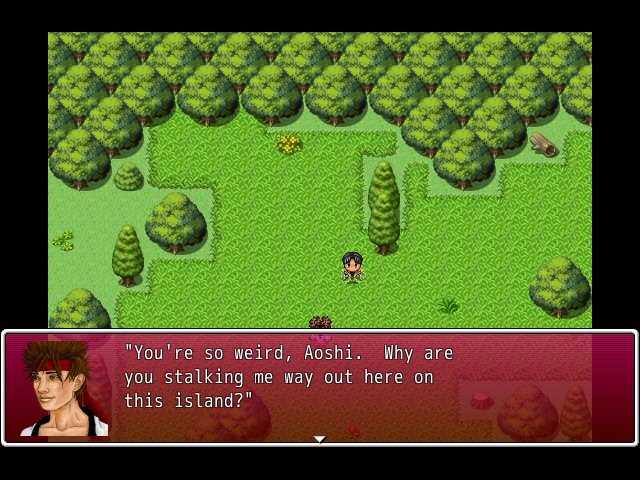 Aoshi’s quest involves an elimination-style tournament, which is going to be entertainingly complicated to make work. I’ve looked at various scripts and haven’t quite decided yet which route I’m going to take, but it should be fun.

I’ve also been enjoying writing Aoshi’s dialogue, since this whole thing is silliness so I’m totally free to go a bit overboard with character traits like ‘being completely cold-blooded’ and ‘not reacting to anything’ and ‘not appearing to notice at all when Sano is flirting with him.’ Oh, and ‘not liking Misao much.’ Eh heh.

TLY — Tremendous progress here. I don’t think I’ve mentioned, but I started WoWing about again, so I’ve been getting a lot of writing done lately. I don’t know why it took me so long to do that. TLY has been moving steadily forward, reaching scenes I’ve been excited to write and shaping its desired long-term theme nicely. I’m very pleased with it.

Of course the last three chapters or so are still sitting around in poor first-draft quality, but editing after the fact is never a problem; it’s getting the stuff down in the first place from which I get hopelessly distracted unless WoW is helping me in the background XD

The really sad thing about this is that my eldest nephew (to whom the project is primarily dedicated, though he has to share with any other children of any of my siblings) loathes reading. How much that’s likely to change over however long it takes me to finish the thing, I don’t know, but this may be a lot of effort for nothing!

The Test — This is a GW fic I may or may not have mentioned in the past — a longer fic, chapterless and composed of scenes of various lengths as has been my habit recently. It’s kinda the most promising iron in the GW fire at the moment — certainly the most likely longer piece to be finished any time soon or not soon. I’m very fond of it, and have been giving it more attention than anything else in the GW folder lately. Pastel-orange-polo Wufei just showed up, which is fantastic.

Aku Soku Zan(za) — Some progress has happened both on the rewrite and on chapter 28. The latter continues to craaawwwlllll forward, and the former moves a little (but not much) faster.

At this point I am considering giving the aforementioned chapterless treatment to this story as well as I rewrite Part 1. I sometimes like the flow of a story better without arbitrary chapter divisions, and I’m kindof a fan of rigid order to chapters when they exist at all. And way back in the day when I was first posting ASZz, what are now thirds of chapters were called chapters… eventually they got collected so that each chapter had one part from each POV… except when they didn’t. The lengths vary drastically as the story goes on, and then when you get to the climax of Part 1? It’s all a mess as far as arbitrary divisions go.

We’ll see how I feel about this if I can manage to get the rewrite going to the point where I have a feel for Part 1 as a whole in its new form. But I’m kinda thinking it’s going to happen. What, then, will I do with the chapter numbers in Part 2? I don’t know. It might be easier and quicker to go forward releasing one scene at a time instead of three… but other artists have made that promise before XD

Red-Eyed Tree Frog — This was a gift for my secret Santa recipient at work, since I figured if I drew her a picture I could get out of spending money on her XD Not that I mind buying gifts for people, but if you can make one for free instead, win! I didn’t take any progress shots because I was in a hurry, and also because I didn’t think I would end up liking it nearly as much as I did. What a shame.

Anyway, the day I spent the most time working on that was the 19th… I watched — or, rather, listened to — four long Christmas movies in a row while I got the picture mostly finished up, killing two birds with one stone since I always seem to have a hard time fitting all the Christmas movies I like into the season. Sitting around watching movies is not something I really have time for, you know? But listening as I draw someone’s present works quite well.

The recipient at least claimed to love it and to intend putting it up in her house. Whether she’s sincere or just being polite I don’t know, but at any rate that’s all over with now.

Heretic’s Reward — Such progress! Linear completion has been reached on chapter 18, and during the writing thereof I did a reread-edit of all previous chapters. I have inordinate amounts of love for this story, and for its setting (more on that presently).

So in this chapter, I was curious for a long time how much sexual description there would end up being. Everyone probably knows how little I like writing detailed descriptions of sex, but sometimes you just have to… it seemed like this chapter might get pretty explicit at one point, but, thankfully, it did not. Happiness!

I don’t remember whether I’ve ever mentioned it, but I’m writing a GW story set in the same world. As yet it has no title, and I haven’t finished even the first chapter yet, but I’m already pretty pleased with it. This one’s set in Encoutia mostly, though there’s some action along the Toronaiwe and a little in Etoronai too. Anyway, I’ve made some good progress on that recently as well. Still no title, though.

Saitou/Sano art — The person that drew me for the secret Santa exchange at work gave me a set of pastel pencils. I already drew one picture with thems — my December art exchange piece, which turned out OKish — but of course the definitive test of a new medium is how well it can portray Saitou and Sano. So I chose yet another super generic two-dudes-together pose and got to work, and it’s turning out nicely so far. I really like the way these things blend. I kinda wish there were more colors in the set, but the ones there are blend so well that I’m not too worried about it. I’m going to have to make a new medium tag if I like this picture enough to post it! Weird!

Yeah, Sano’s hand is all kinds of weird… I got lazy. Also, if the damn picture is sideways, that’s because life hates me and I give up.