Know what they say? –it’s, “Nothing lasts forever.” Then what makes love the exception?

One day at work I was adjusting a small blood tube in its stopper when it suddenly shattered!! I got a cut on my (dominant pointer) finger that looked like a cute little smile, and blood (mostly mine) aaallll over the third exam room.

Speaking of work, I seem to have crossed some threshold. I’ve had multiple dreams about this job lately, whereas previously I rarely did.

In one, V announced that I was doing all the surgeries that day. At first I was worried because I’m not really sure how they go about ligating the organs — generally if you’re in the room at that point, you’re watching something else — but evidently I figured it out, because I managed one surgery with no problems.

But then something happened that we all had to work on, and I wasn’t able to do any more surgeries for several hours. At about noon, V asked if I was done with all the surgeries yet, and when I told her I wasn’t, she said, “Oh, well, that’s OK.” And I was like, You don’t know just how not-done I am… In real life, ZG described this as a McDonald’s dream not set at McDonald’s XD

In another dream, I went into Safeway looking for a ruler (which I actually need in real life). They had a startling (and unrealistic) number of rulers of different types, and whilst I was looking through them trying to choose one, there was this little cat that needed to be extubated. My blow-torch’s end was warped into an oval shape and didn’t fit the cuff, but Shawna was nearby and let me use hers. I extubated the cat (who was on a shelf on some aisle or other), and it was very sweet.

In a third dream that wasn’t about work but was about cat, Galileo picked up a Guitar Hero guitar and brought it to my brother as if to request instruction on how to play it. Brother remarked that the buttons on the guitar weren’t working very well. BUT SO CUTE a little cat wanting to play Guitar Hero.

And in yet another dream, we were at Disneyland. The slow-moving-gondolas-across-the-park “ride” was there, but it was like a skii-lift in that the front of the gondola was open and people sat in it with their feet dangling and just a lap-bar to hold them in. As a gondola with some childs in passed over brother and me (we were, of course, discussing which rides we wanted to go on that day), one little girl dropped her teddy bear. Somehow, by pure coincidence, it fell perfectly into my hand, so I called up to her that I’d wait for her at the exit to the “ride” to give it back.

Enough about dreams. It occurred to me the other day that the HoH four fit pretty well into the four Hogwarts houses: Heero is a Hufflepuff, Duo is a Gryffindor, Trowa is a Ravenclaw, and Quatre is a Slytherin. ZG wanted to argue Heero and Trowa, but I stand by my original thought, heh. Of course they probably sort differently in other universes.

Note: Loratadine does make me drowsy. It’s great to have a lot of allergies and no practical way around them.

I may have mentioned at some point that I’m trying to replace most of my physical book collection with Kindle books. Of course I keep anything special to me or that I can’t get a Kindle version of, but I’m still getting rid of a lot of books. And no matter how much I remind myself that I never read physical books and that this will clear up much-needed space in my room, it’s still heartrending to get rid of so many lovely books.

OK, the next several pictures in my collection of pictures that need to be posted are of my sweet cat. 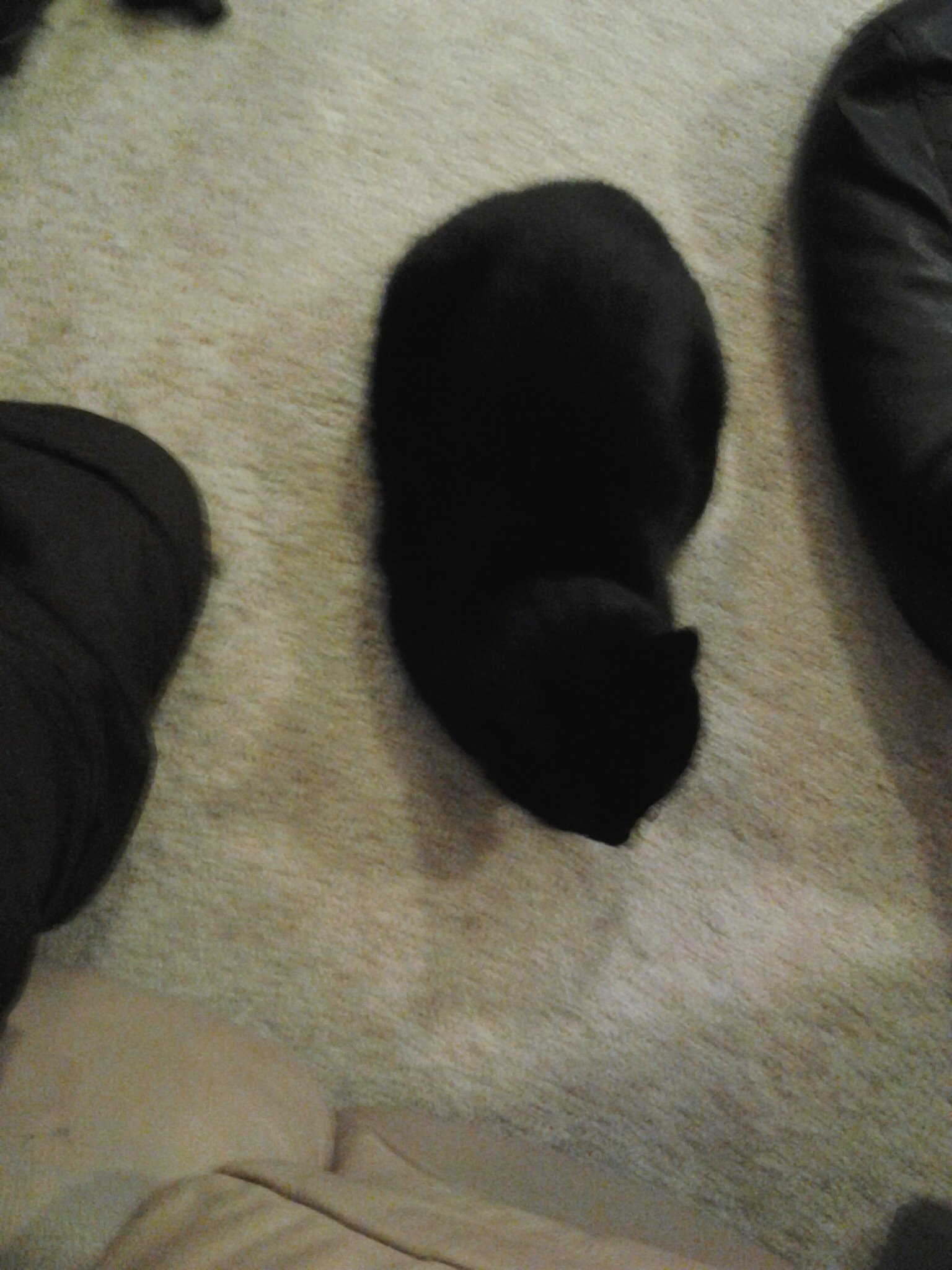 She loves to lie on the stereo box beneath the TV, because it gets really warm. Galileo loves that spot too. 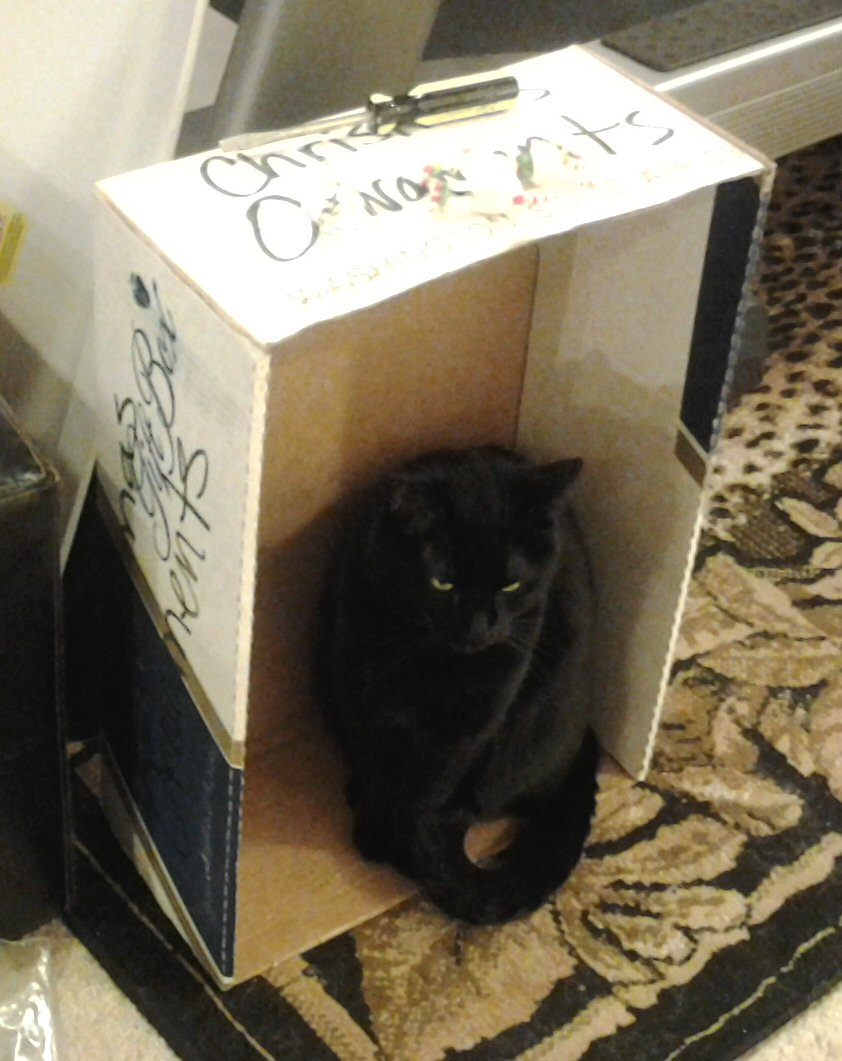 And of course, like all cats everywhere, she loves cardboard boxes. If a box is not available, just cardboard, apparently, will do. 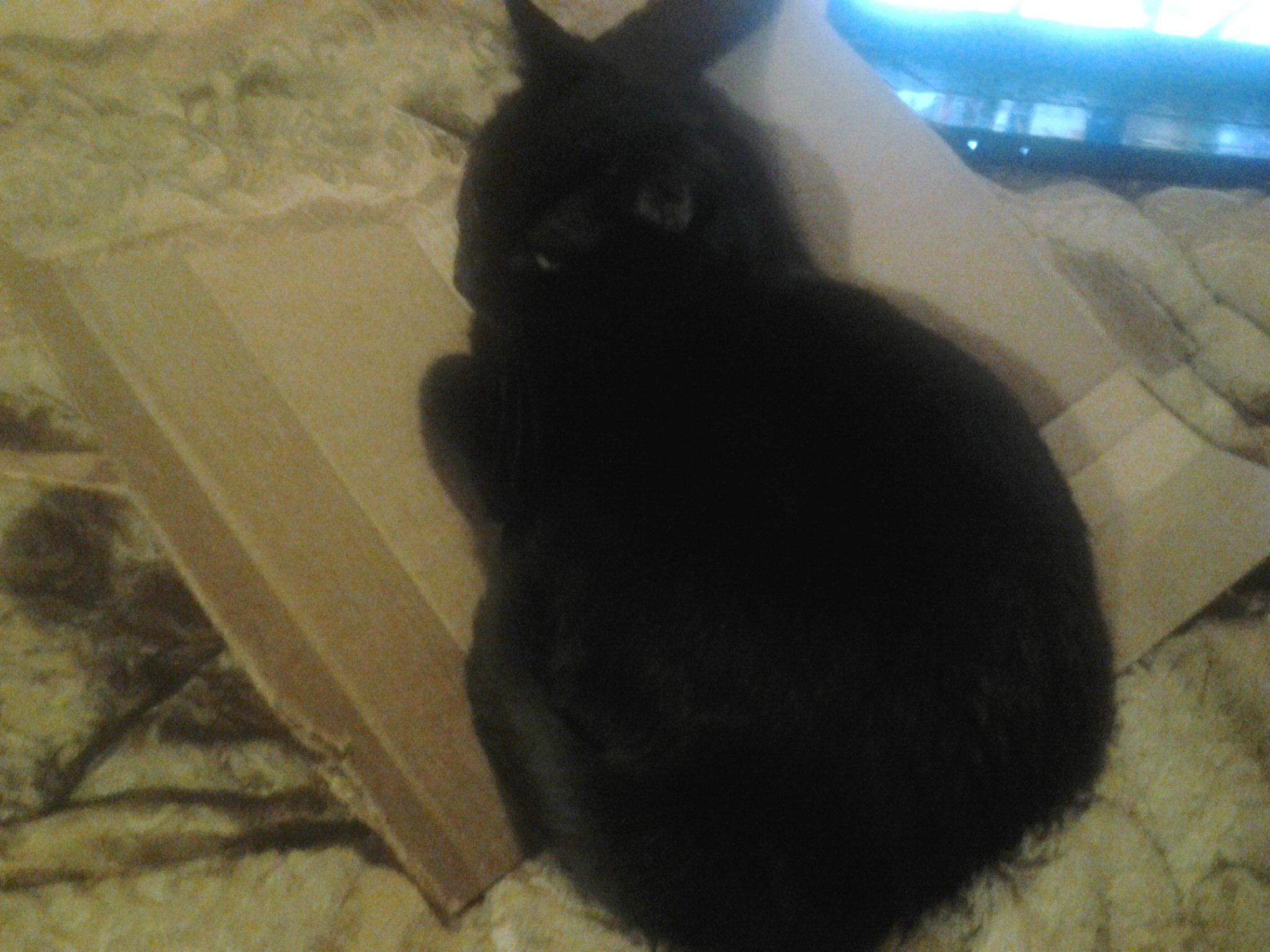