Pride of her Parents – I’ve talked about PohP before, but just as a refresher: this was my first-ever fanfiction (for a given definition of that phrase that I won’t get into right now). I started writing it when I was 17 years old, Mary-Sued about with my 17-year-old OFC En Shevil quite happily for a few years, and eventually drifted away from the Quest for Glory fandom (though not from the games, because they’re still awesome). As such, the story holds a special place in my heart because fanfiction is still an important part of my life and because it gave me some really good writing practice.

However, almost two decades later, I’m finally finished with it. I was glancing at it, as I’ve done every so often for years and years, and this time my reaction was less, Someday I’ll write the rest of this, and more, Heh… this monster is never going to be done.

Of course a big part of the problem was getting an old Windows game to run on a modern computer. The first four installments in the series you can (and I frequently do!) run in DosBox (on a phone even, these days XD), but Dragon Fire (which is the point the story was stalled at) is a different kettle of fish. There were things I needed to check in the game, and that just wasn’t going to happen.

There wasn’t actually a lot of the story left to write. Much of the final chapters was already complete, with gaps of various sizes that needed to be filled in, mostly with stuff for which I needed the aforementioned information (and inspiration) from QfG5 to come up with.

So I decided that, instead of taking the story down as I usually do when I declare an incomplete fic abandoned, I would give it the honor it deserves as my first fanfiction and put up what was left of it with summarizing paragraphs filling the gaps. And that I might as well go all-out and throw in summaries of the planned sequels, which were even more hilariously bad than PohP.

In its “finished” state, Pride of her Parents weighs in at 151,384 words — still not quite as long as Plastic (153,161 words), which would therefore get to keep its Longest Fic On The Archive crown even if I thought an old, terrible, abandoned story’s length counted in that race.

So this was all a great exercise in nostalgia, and made me laugh really, really hard at times (particularly during the sequel summaries). It’s nice to have that finished at last.

I’m considering declaring Hero, Hero, my much more modern and less stupid QfG fic, abandoned too. I like it, but I never work on it, and I fear I’m very little likely to again. Also, if my other fandoms are dead, the QfG fandom must be considered… nonexistent, I guess. Like, never existed in the first place? I dunno… how much deader than dead can you get? That’s what QfG is, meaning there is no audience whatsoever for a story like Hero, Hero — especially given that Wolfgang and Klaus were destined to hook up eventually and I don’t know that there was ever a non-homophobic subset of QfG readers. We’ll see, I suppose.

The Prevention of Gross Injustice – Story kinda came out of nowhere. I’d written a general summary of the idea some months back, but hadn’t really thought about it for a while, and then all of a sudden I was like, Hmm, this idea’s kinda cool… let’s see if I can summarize it in more detail. And the detailed summary was incredibly easy to write, which made the actual story even easier. So it happened in a matter of, like, three weekends.

Well, really, what made it so easy was the fact that the entire story takes place in one room and over the course of, like, an hour. Because of that, I didn’t even have to do much worldbuilding. Usually in an AU, I have a pretty detailed concept of the story’s setting — much more detailed than is ever conveyed in the story, in fact — but in this instance, little more than a few key details needed to be determined.

As I mentioned when I first posted the story, this is the (I think) fourth in a row of fics about Saitou and Sano that aren’t focused directly on their relationship — something else adjacent to the actual relationship (such as Sano’s friendship with Katsu or Aoshi’s interest in Kenshin or everyone having had a crush on Kenshin at some point or whether or not Sano is a terrible, terrible person) is more the focus of the story.

This is fine and not something I mind, because stories should be about what they’re about and not have their focus dragged elsewhere just because I happen to adore a particular romantic pairing. But one of these days I really need to write another standard Saitou/Sano fic where their relationship is front and center onscreen XD I miss them running into each other and bantering and stuff happening and then they hook up and make out and we all squee.

Aku Soku Zan(za) – Speaking of which! (By the way, this is the next contender for the Longest Fic crown, but since the earlier parts are being rewritten at the moment, new parts coming along and boosting the length are kindof on hold. We’ll see what the rewrite does to overall length, though!)

Yeah, so, the rewrite is pretty awesome so far. I know it’s really teasy of me to say so when I haven’t the faintest idea when I’ll get around to posting anything, but, seriously. It’s awesome. I’ve tweaked some stuff to better fit the themes I want, and Saitou’s character is really just shining for me now. Also, his interest in Sano is coming along super sexily.

I’m writing a fight scene at the moment, which is why it’s progressing at a crawl — fight scenes aren’t quite as bad as sex scenes, but they’re definitely high up there on the list of “Physical Activities That Require So Much Damn Detail They’re A Huge Pain In The Ass To Write.”

Still haven’t decided on some of the old names — Yaoku, Eisatsu, Karashigumi, etc. — so at the moment they’re still in place. “Raihishuu” was really the troublemaker; in general I’m not too fussed about made-up Japanese names, even if these days I use real ones (because it’s just not that hard to look them up, 23-year-old self!!)

Sano’s Badass Adventure – Lately I’ve been working on the library in Keikan (the city where Saitou lives), which has been a good exercise in NPC’ing. It’s actually very boring to program NPC walking routes and behavior, which is somewhat ironic when you reflect that I’ve been working on the library as an excuse not to work on Saitou’s quest because it’s so tedious XD 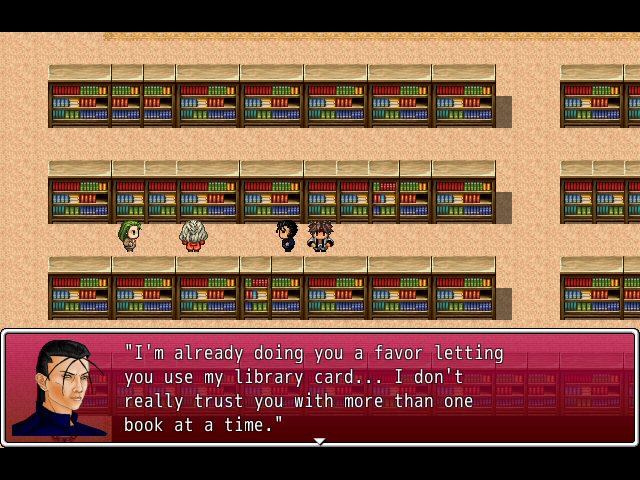 Holy shit, there’s not a damn thing in this entire entry about GW stuff, is there? Yikes! I’ll have to see what I can do over the next little while to work on some of what I have in progress for those boys! (The Test and the next, still untitled HoH story remain the most prominent things over there).