Joe — So I did end up spending the entirety of the 5/21-5/23 weekend working on this picture in order to have it done in time for V’s birthday on the 25th, and wrote not a word of story that entire time. And I tell you what: a weekend without story is depressing as shit. However, I was glad to get Joe finished, and pleased with the final product. Here is the last progress shot: 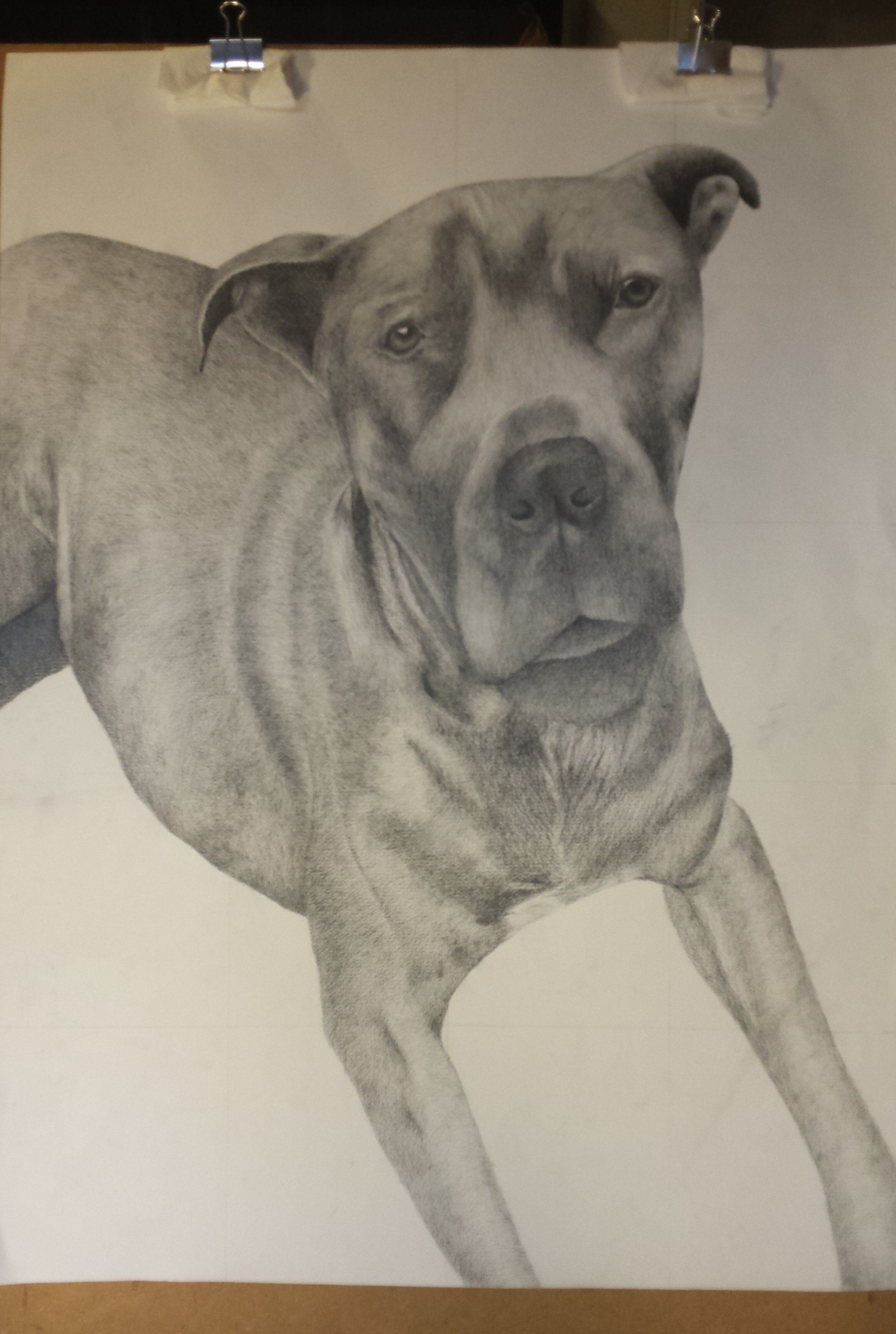 Turns out I didn’t need leading zeroes in the filenames after all, since there were only nine progress shots. There really should have been more, during different stages of the weekend’s work, but I was too lazy to stop drawing, set the picture up somewhere with light pointing at it, and take a picture every few hours. So most of the endgame is undocumented.

Anyway, I went over the 6B with 3H, and I am absolutely enchanted with the effect I achieved. In the above shot, if you compare the face to most of the rest of the body, you can see the difference it made. I really really love it.

So then I finally got around to the background, and, you know, I’d been telling myself all along that I should have done the lines for the background at the same time as the lines for the figure? With the figure completed and in danger of smudging, and only a 12″ ruler to work with for straight lines, it was extremely difficult (well, as you can see in the finished picture, frankly impossible) to make the lines on either side of the figure match up properly. If I hadn’t been so lazy (and in so much of a hurry to get the thing done), I could have eyeballed it better than I did, but guess what.

V was very happy with it. OK, that’s an understatement; it brought her to tears. I’ve written stories that have had that effect, but I’ve never had visual art of mine do that to someone! XD So that’s probably my favorite part of the whole project. She keeps saying she wants to pay me for it, and I’m like, Dude, you already did. She also tried to get me to sign the picture, and didn’t understand my shuddering horror at the idea (in case you wanted to know which side of that debate I’m on).

I took a glance at the file information of the very first progress shot, and realized that it’s been almost exactly a year since I started drawing it — not in any way because it needed that long, but because my ass is lazy and didn’t work on it as often as I should have. However, that means that good old Joe has been looking out over my room for almost an entire year, and therefore now I kinda miss him. I anticipated this feeling, and took a picture of him where he used to sit atop my CD/DVD stack on the table: 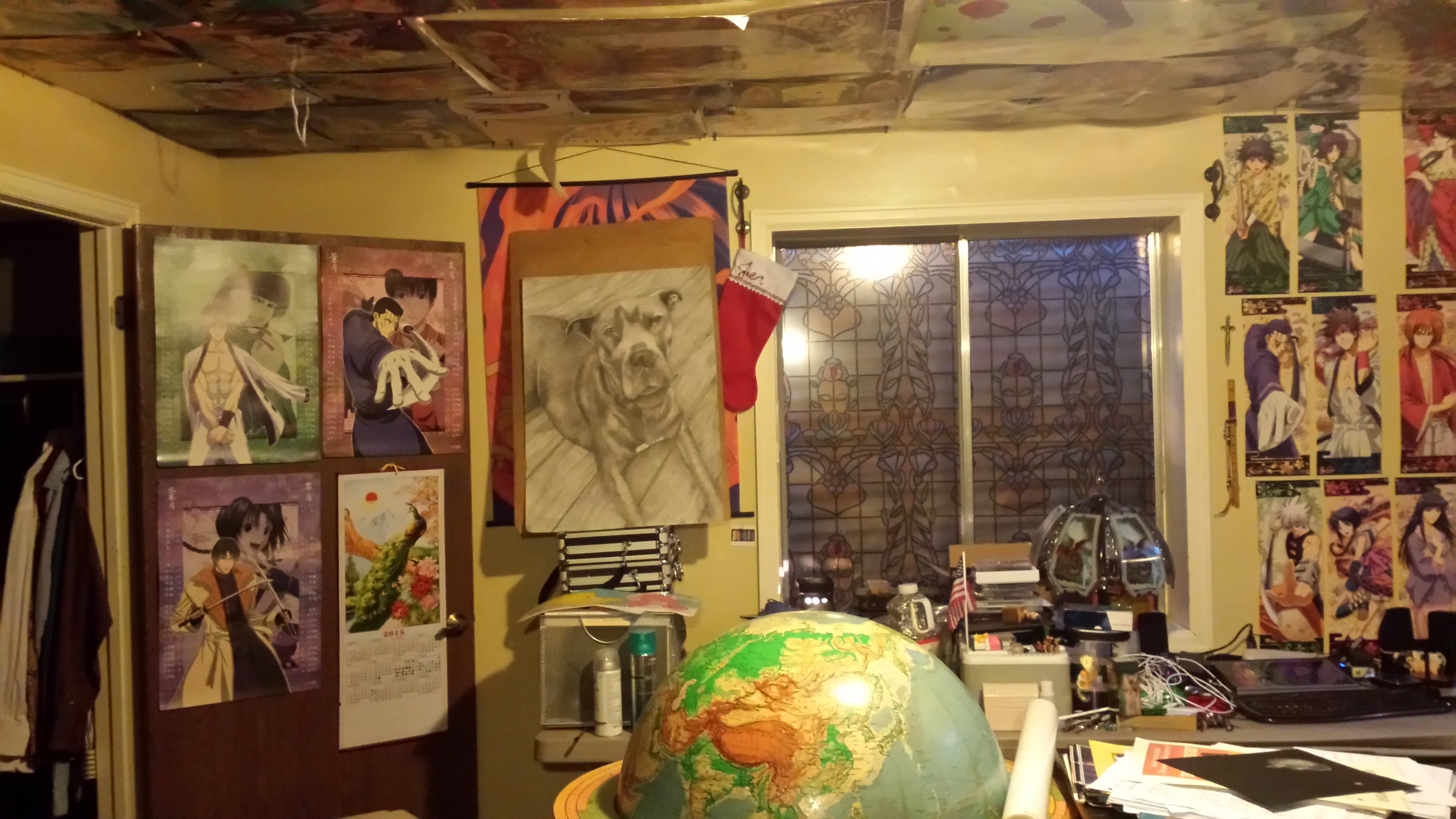 Goodbye, fair Joe! I’ll always love you! And now I can turn my small amount of visual art energy toward other things. A certain pair of S’s come immediately to mind. And speaking of which…

Aku Soku Zan(za) — So obviously I got started with this. Usually when I start posting a long story, I’ve written enough of it in advance that I have a quote ready to go that fits the piece overall pretty well… but in this case I don’t. I’ve only written four scenes at this time, and haven’t jumped ahead since I’m just working straight through a pre-existing story and redoing all of it. And the previous quote, where Sano was angrily addressing the absent Saitou, has been completely removed. So here we have the first story without a story quote on the archive. I’m sure there will be one eventually.

Then the other question was how to post an in-progress lengthy but chapterless story. I have no desire for each scene to be a separate post, but if I add each scene onto an existing post, it won’t send out email updates or appear in feed readers to alert readers to its appearance. What I’m planning at the moment is adding each scene onto an existing post and then making a new post (which will soon after be deleted so as not to clutter up the place) announcing and linking to it.

That Remarkable Optimism — What the crap is that, you wonder? I’ll tell you! It’s the previously untitled HoH story!!!!!! Congratulations on me!!!!!!!!!

This story has reached linear completion, but (I know I’ve already mentioned this) the ending is likely to get rewritten a million times; I haven’t the faintest idea how soon the finished product is likely to appear. I’ll be glad to have it done, though, since it’s not the most interesting HoH installment and it’ll be good to move on to other things.

Blood Contingency — Part 11 is progressing well. It’s amazing how much of a difference it makes to know I only have three in-progress RK stories to work on. I’m not sure why it makes such a difference, but it’s so much easier, all of a sudden, to work on them. Hooray!

TLY — I’ve reached linear completion on chapter 17 and gotten my good friend back to a better place. He was feeling very unhappy and bad about himself, but he’s ready now to try again. I’m afraid this part of the story will need a lot of reworking later, but whatevs. Always happy to press onward!

I was considering what to name the priest, who is one of those characters that doesn’t have a big enough part in the story for me to think up a whole life for him… so I just gave him the last name of one of my co-workers. And I can almost feel the last names of others of my co-workers clamoring to be let in as well XD We’ll see how many other characters, though, are small-time enough to be allowed random names.

This has been an excellently productive weekend, and I am very pleased. Onward!