About twenty years ago we went to see Mt. Rushmore, but underestimated South Dakota’s peculiarities and found it so snowy and cold (in June) that the vacation kinda sucked and failed. Last year we planned to try again, but unluckily scheduled our trip for the weekend just following Independence Day; I was totally unable to find a place for Hiko to stay while we went, and the hotels we’d already booked didn’t accept pets. So we went to grandma’s house instead.

This year we actually managed it: three pet-friendly hotels, four days of driving through the hottest weather evar, 61 mammoths, and stopping to look at random touristy stuff and see if Beeks felt like pooping yet.

The first thing we discovered was that downtown Cheyenne has a shit-ton of PokéStops. Of the four of us that live in Colorado Springs, dad is the only one not playing this game, but he’s watching the social phenomenon with amused interest, and tends to drive us around without complaint to stops and gyms. We really didn’t anticipate spending quite so long in Cheyenne XD

South Dakota, on the other hand, was entirely dead on both data and cell signal for all the Pokémon trainers in the car. I was really looking forward to finding out what might be hanging around near Mt. Rushmore, and what stops and gyms there might be, but no such luck. However, Pokes did tend to wander by our Wi-Fi-enabled hotels every night, so we got our fix.

We visited the Crazy Horse Memorial again, and estimated among ourselves that it’s going to take another 180 years to complete. And I’m not quite sure how I feel about that whole institution. Crazy Horse was a badass whose story and memory I like very much, and having a work of art dedicated to him seems pretty great. And as a work of art, the sculpture is shaping up to be awesome; certainly the smaller models of what it will supposedly look like in another two centuries or so are wonderful.

But the concerns of some of the Lakota about carving up the Black Hills like that seem totally legitimate. And this whole “Indian Museum of North America” kinda sets my teeth on edge.

Of course I’m not a Native American to any degree whatsoever, and know shamefully little about their various cultures, so I can only imagine how any one of them might feel about all of this. And I’m having a hard time coming up with an analogy in my own life, given my religion of art-worship. What if someone took a work of art I essentially considered sacred, destroyed its functionality as a work of art, and dedicated the resulting piece of trash, in all sincerity, to the original artist? I’m not sure how that could be accomplished, but the idea is certainly unsettling.

And walking through the museum at that location was kinda creepy. Because usually I see that sort of display relating to people that died thousands of years ago, not people that are still around today, possibly just a few miles off living in conditions of inconceivable poverty, oppression, and neglect. Yes, I know the purpose of the place is to educate visitors about various local tribes, but in practice the museum seems to relegate them to a quaint and interesting relic of a distant past, to further hasten an already abused people into obscurity and destruction.

I came away from the Memorial with very mixed feelings, most of them negative. I love the face that’s up there, which has been completed in beautiful detail since the last time I saw it — I’m just not sure it should be up there.

So everybody that lives on this planet informed me that we absolutely must drive through Bear Country USA while in South Dakota, and they were right. So much badass bears. My favorite part was when one ambled up and started gently chewing on the bumper of the car in front of us.

We ooh’d and ahh’d over the animals we could see, and then got into the bear section near the end where we were delighted with how many bears there were and how interesting and active they were and how one of them was biting the car in front of us.

So then this speaker outside somewhere comes on, and a muffled man’s voice is saying something unintelligible but clearly unrelated to us — and this wakes Beeks right up. So he gets up to look out the window, and he freaks out. He starts barking and barking and barking at the bears that are all around us, but more than that, he’s talking to the bears.

He has this hilarious way of talking to things he wants to get at that are out of his reach. Yeah, he barks too, but the talking is a distinctly different — and incredibly funny — sound that I’ve long wished I could get a recording of. Mom tried to record him in the car talking at the bears, but didn’t manage to start the recording until all the bears were out of sight and only some antelope or something were left for him to talk to.

Anyway, we were all laughing ourselves sick and sore over this, and Hiko was super energized and excited. We imagined him coming home and telling his best friend Galileo all about the trip, and getting to this part like, “And I told those bears…” and Galileo being like, Yeah, right..

There’s a pretty fun tiny little zoo at the end of Bear Country, but it was a billion and a half degrees so not a lot of time could be spent in it. I did take a selfie with a cute raccoon, though: 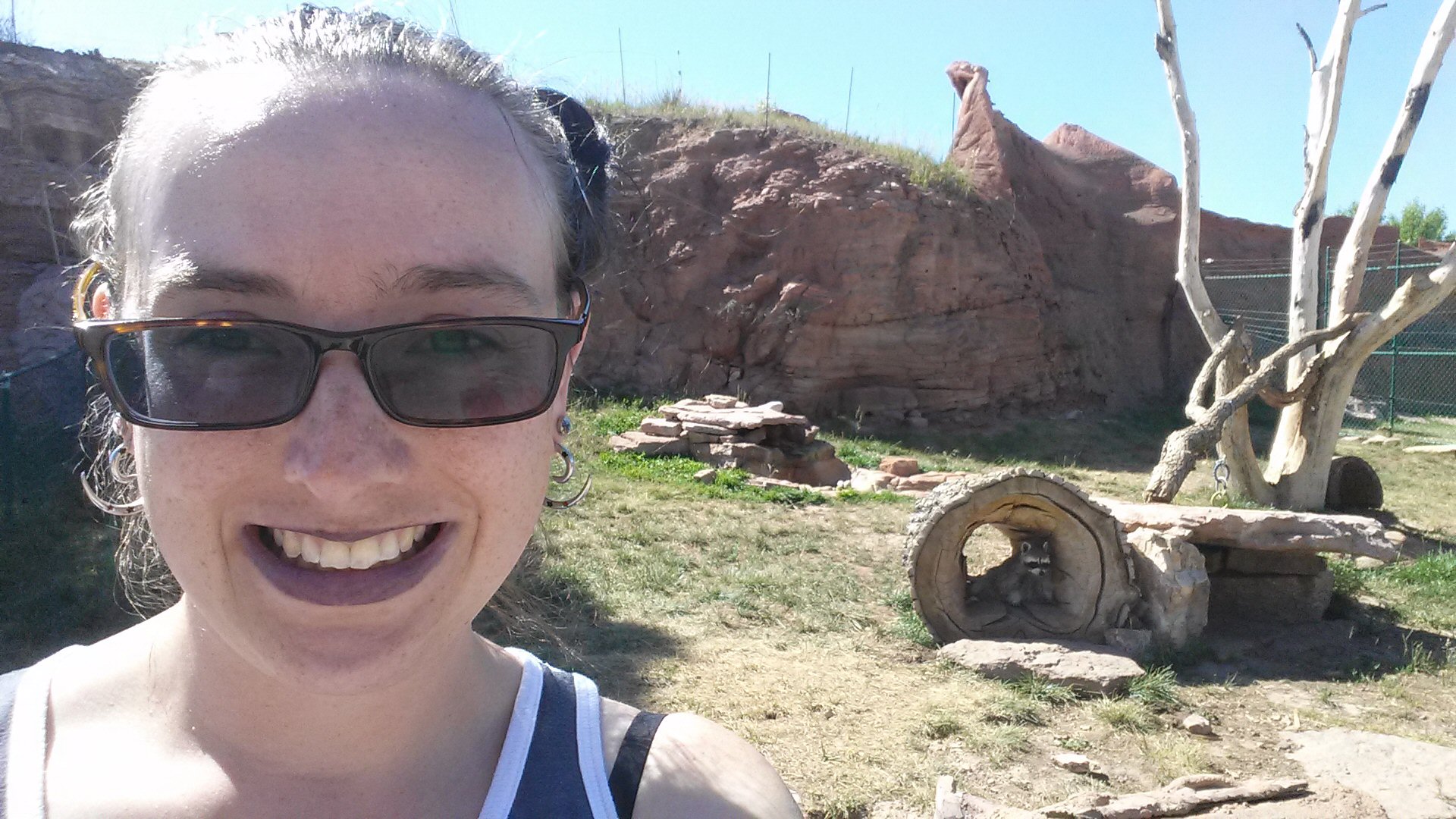 Mt. Rushmore was awesome, though Teddy still seems out of place. I’m always interested to note that the bigger a work of art is — the more firm in its place (both physically and in the history of such art) and able to speak for itself — the more vaguely-related commercialized bullshit and rigmarole seems to gather around it. But the onsite ice cream was good. 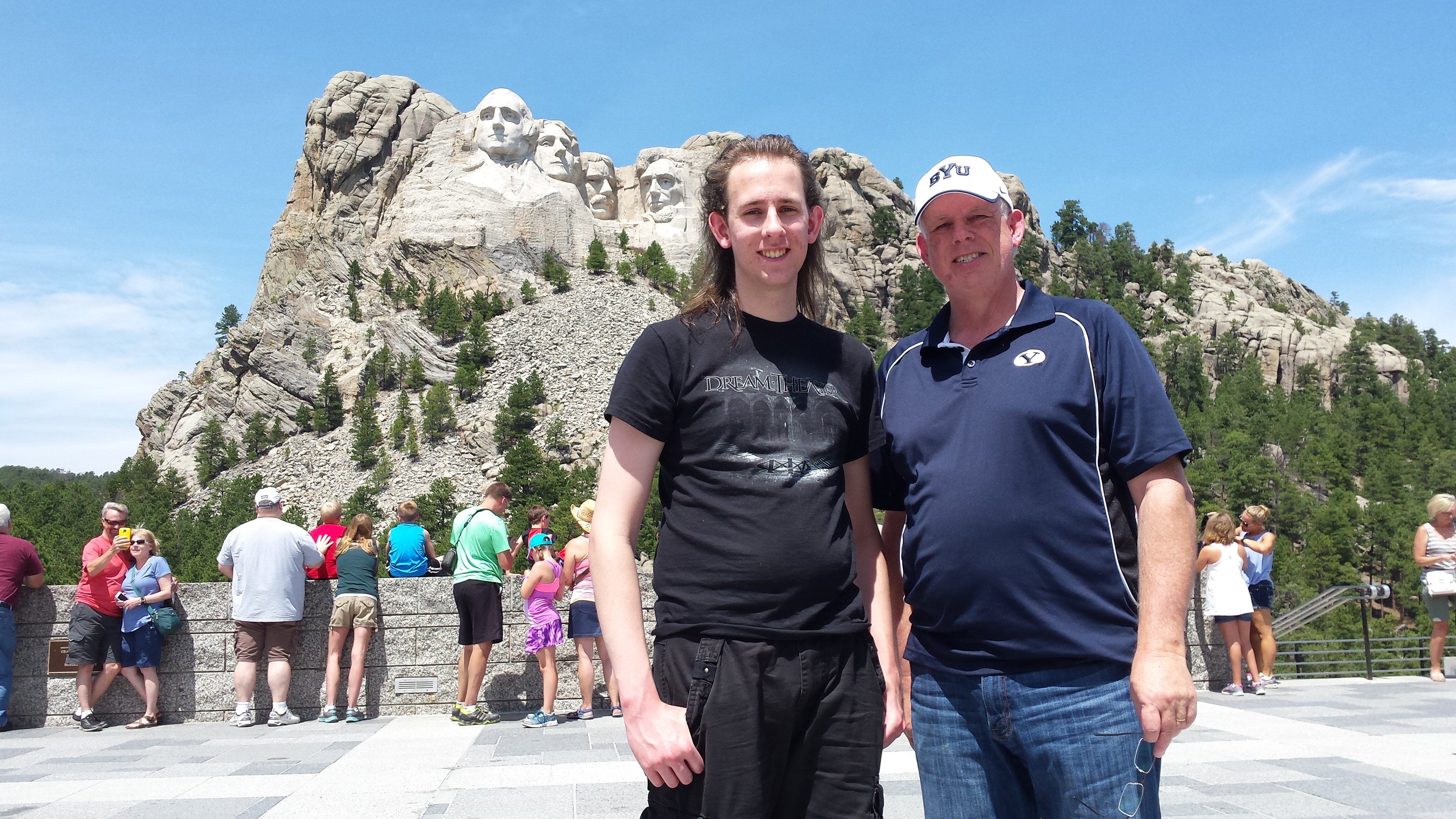 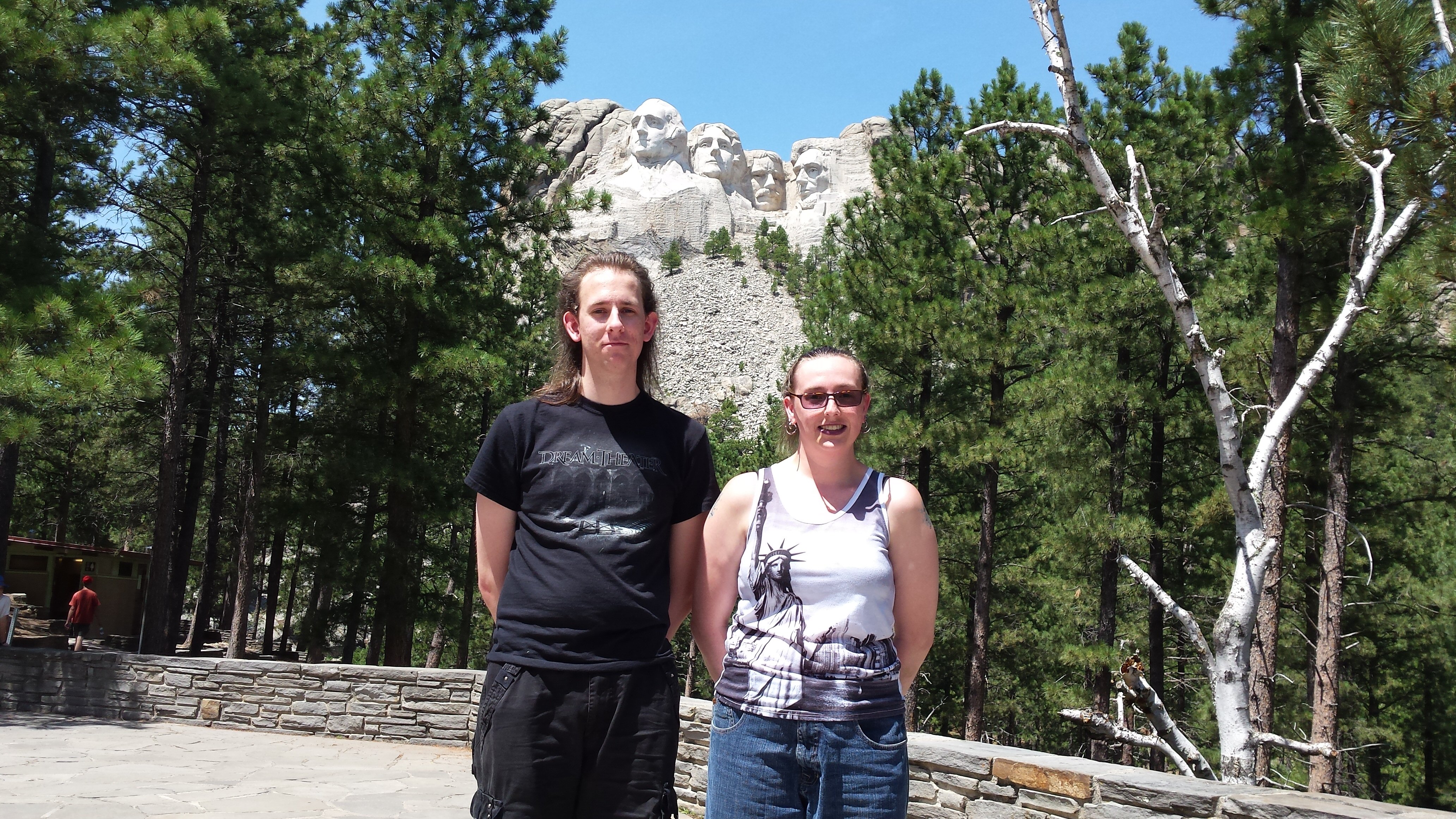 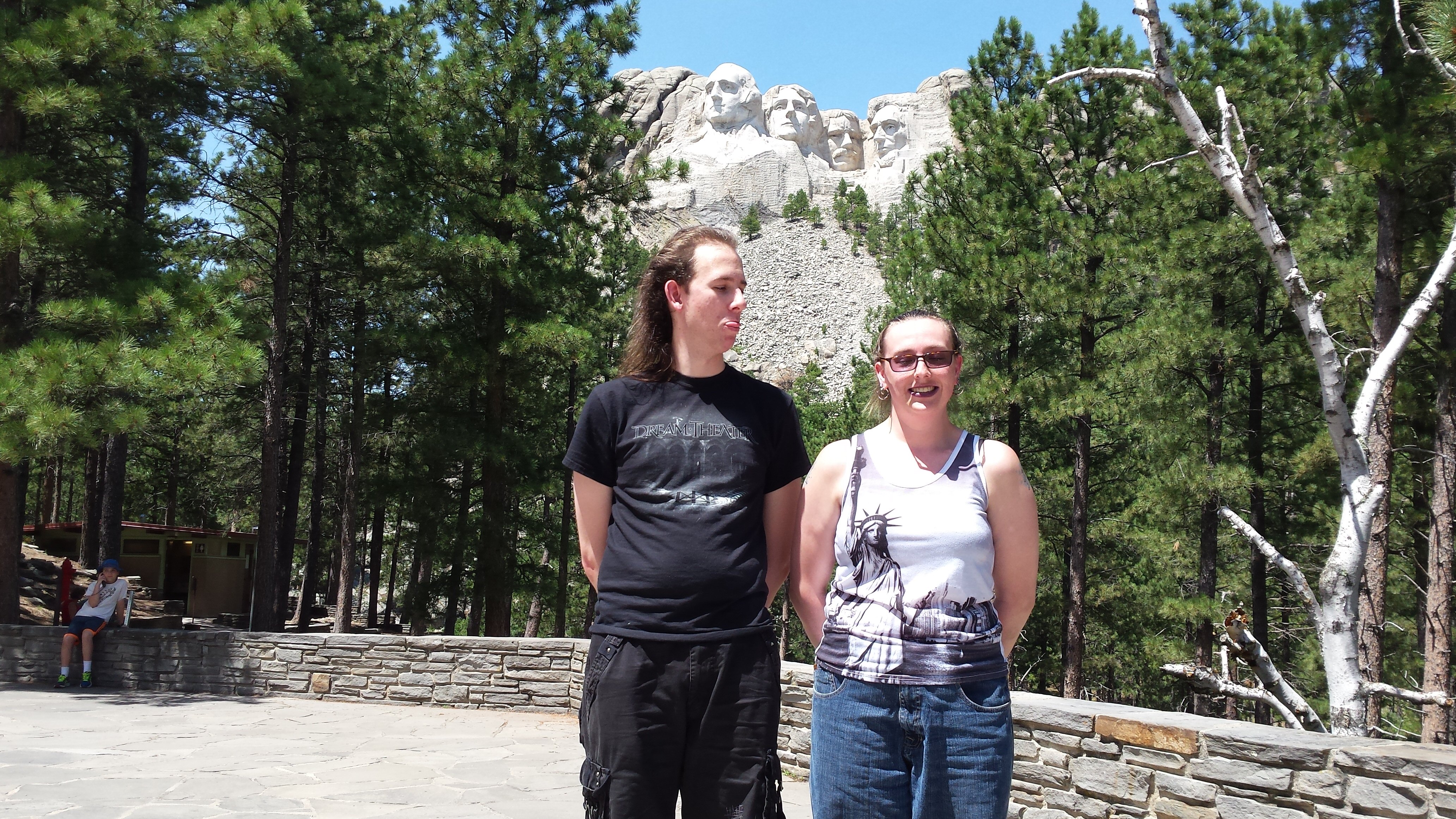 One time there was a bison walking so close beside the road as we drove by!! 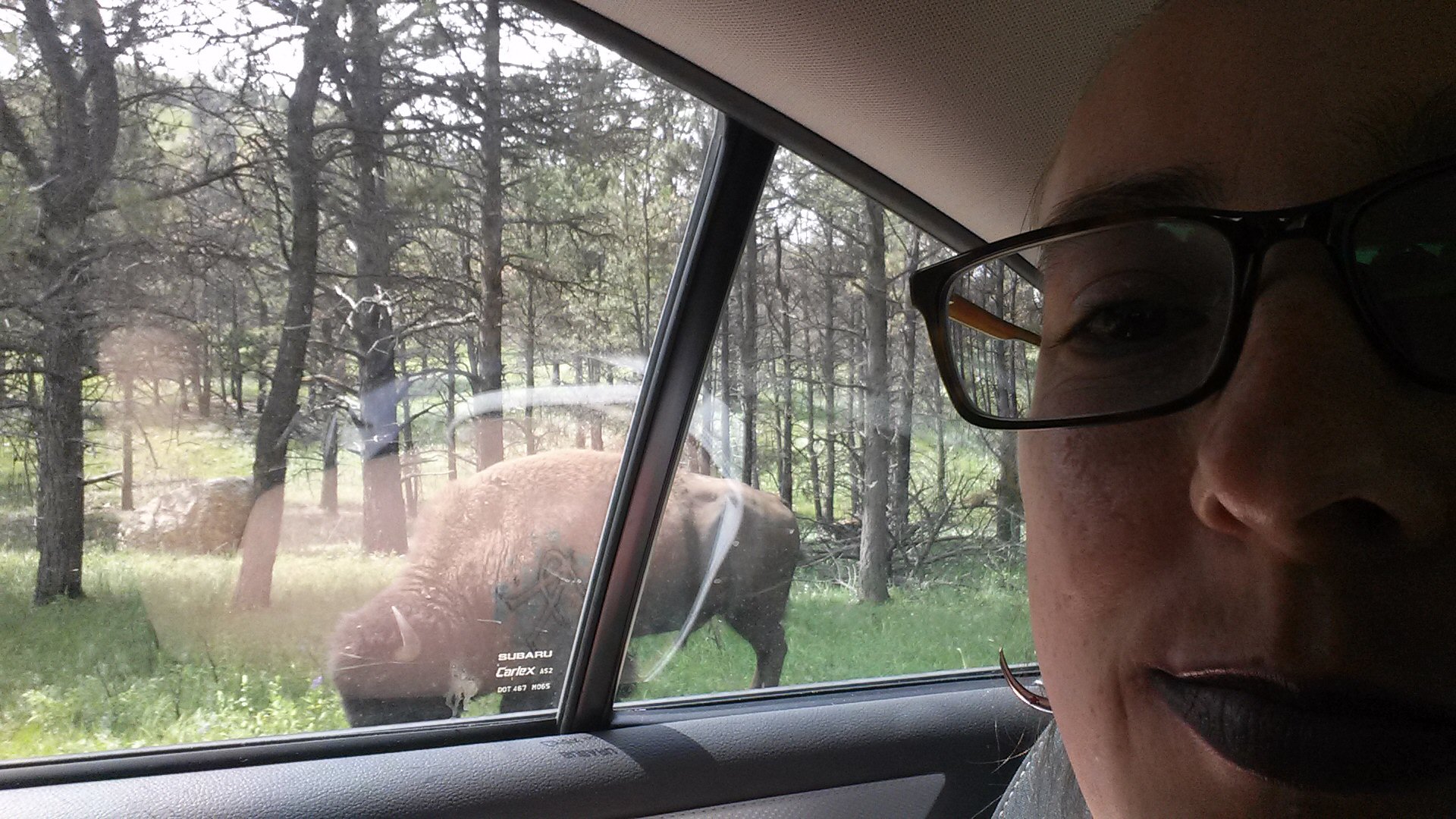 OK, so. Twenty years ago, on our way to South Dakota, we drove past Carhenge in Nebraska, and everybody in the car went, OH MY GOSH WHAT IS THAT STOP, DAD, NEED PICTURES NOOOOWWWW. And dad said, “We’ll stop there on the way back,” and kept driving.

And then we took a different route on the way home.

Two decades later, none of us, I think, had ever forgiven dad for that XD I was especially annoyed when, during my visit to actual Stonehenge, the tour guide showed a picture of Carhenge and I couldn’t say I’d been there. So this time you can be damn sure Carhenge was specifically planned for. 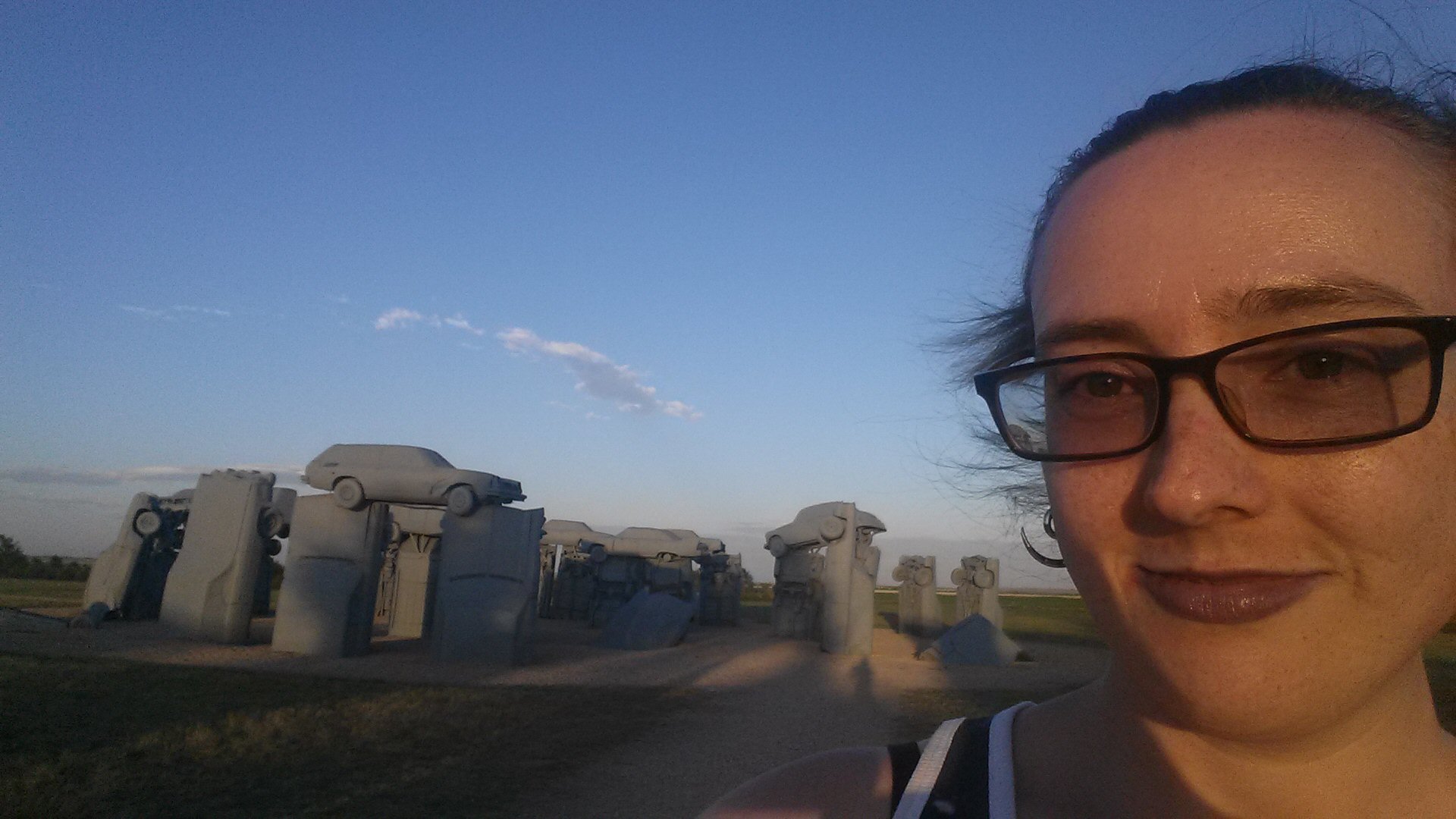 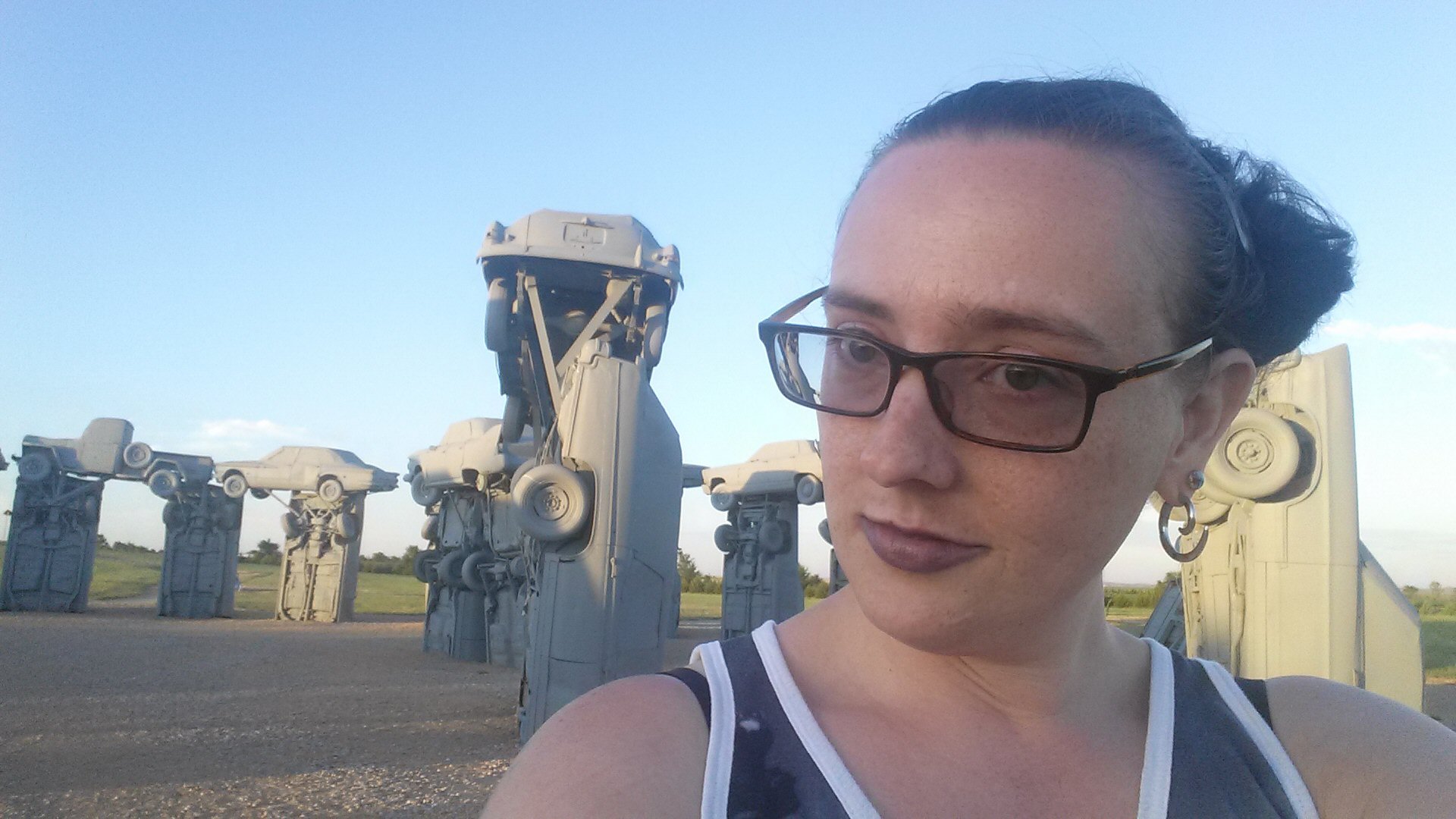 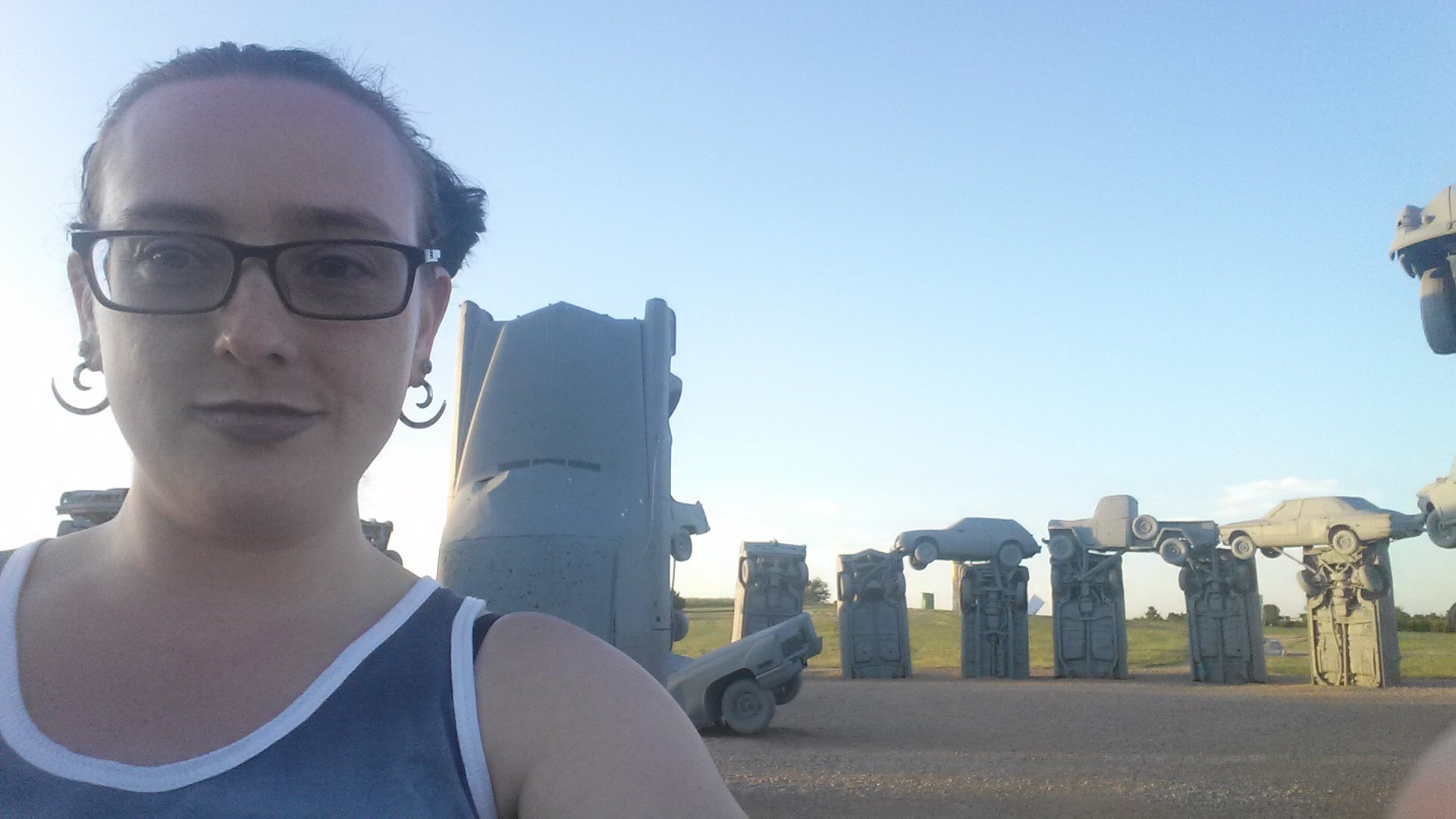 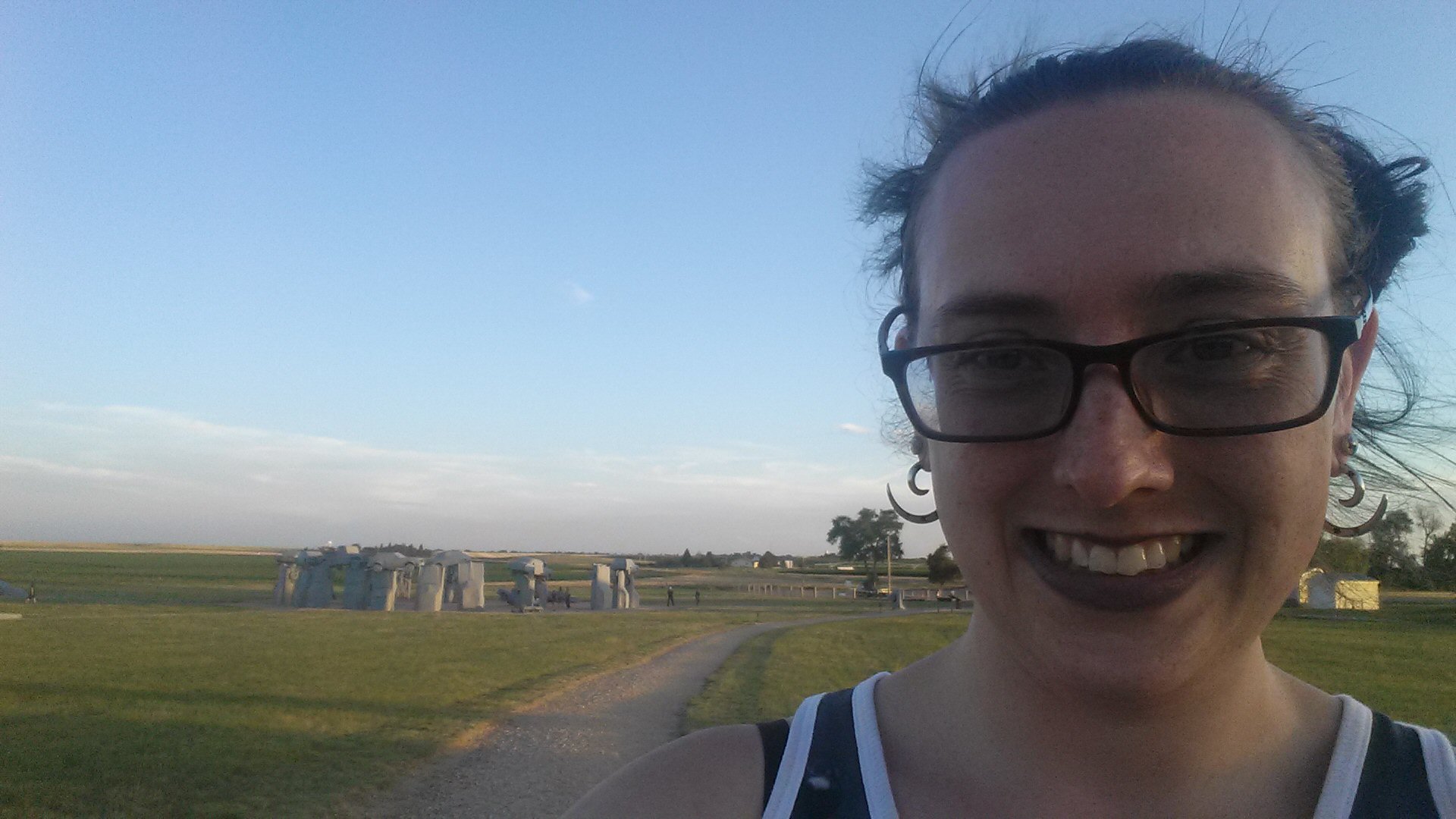 I thought it would have been super cool to get pictures at Carhenge set up just like the ones at Stonehenge, but logistically it would have been extremely difficult if not impossible. Atmospheric conditions were nearly the precise opposite, and I had a little dog pulling at my wrist, among other things. Ah, well.

At one hotel, whilst out walking Deeks, I came upon these rocks huddled under a drainpipe for shelter: 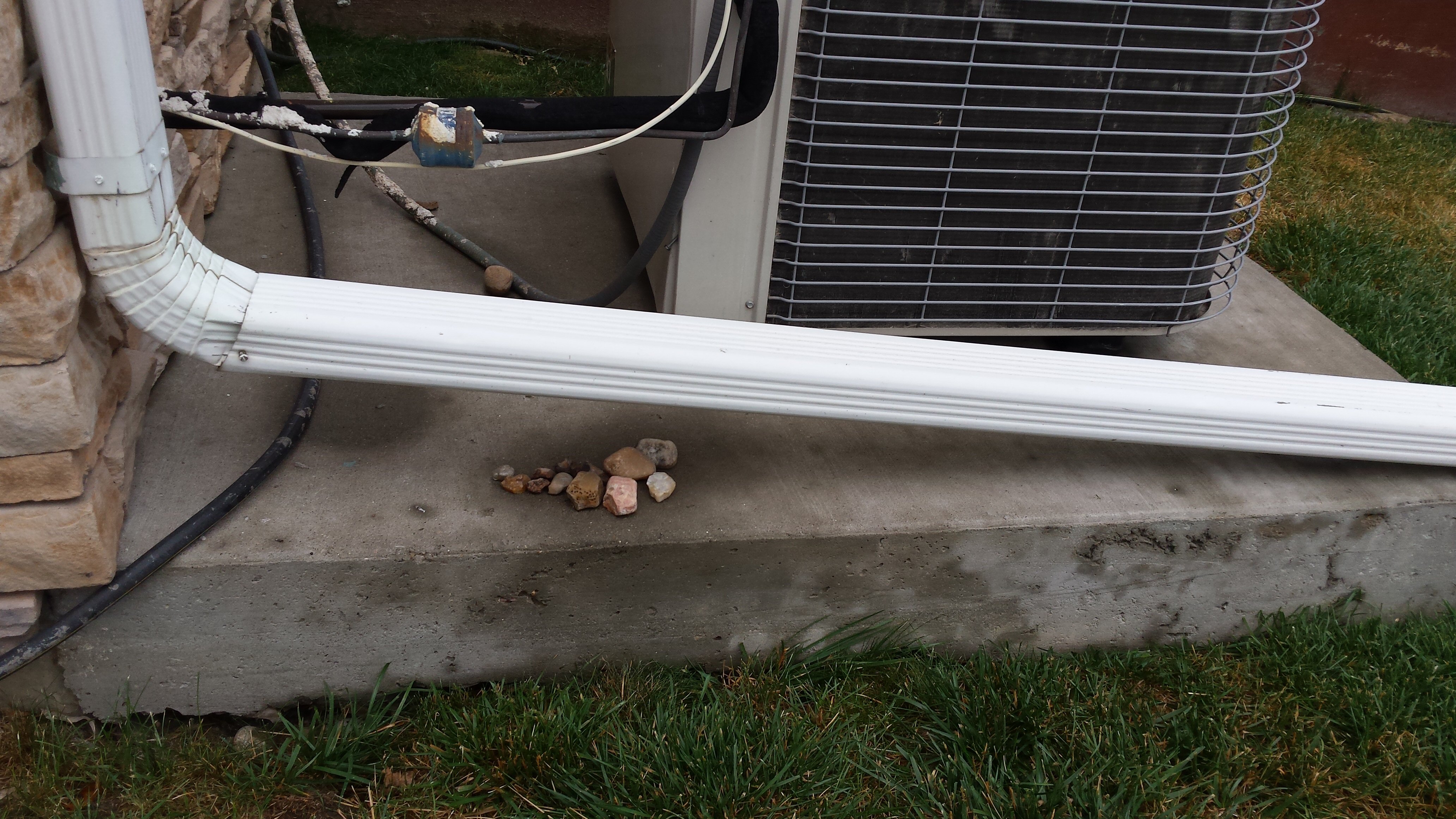 And another hotel room had the most oddly placed Jacuzzi tub. It was immediately inside the door. Not in the bathroom, which had a separate, normal-sized tub, but in the little entry area in full view of the first of the two rooms and anyone coming through the door. It didn’t even have a curtain. Here’s a picture I took while standing in the room’s open door: 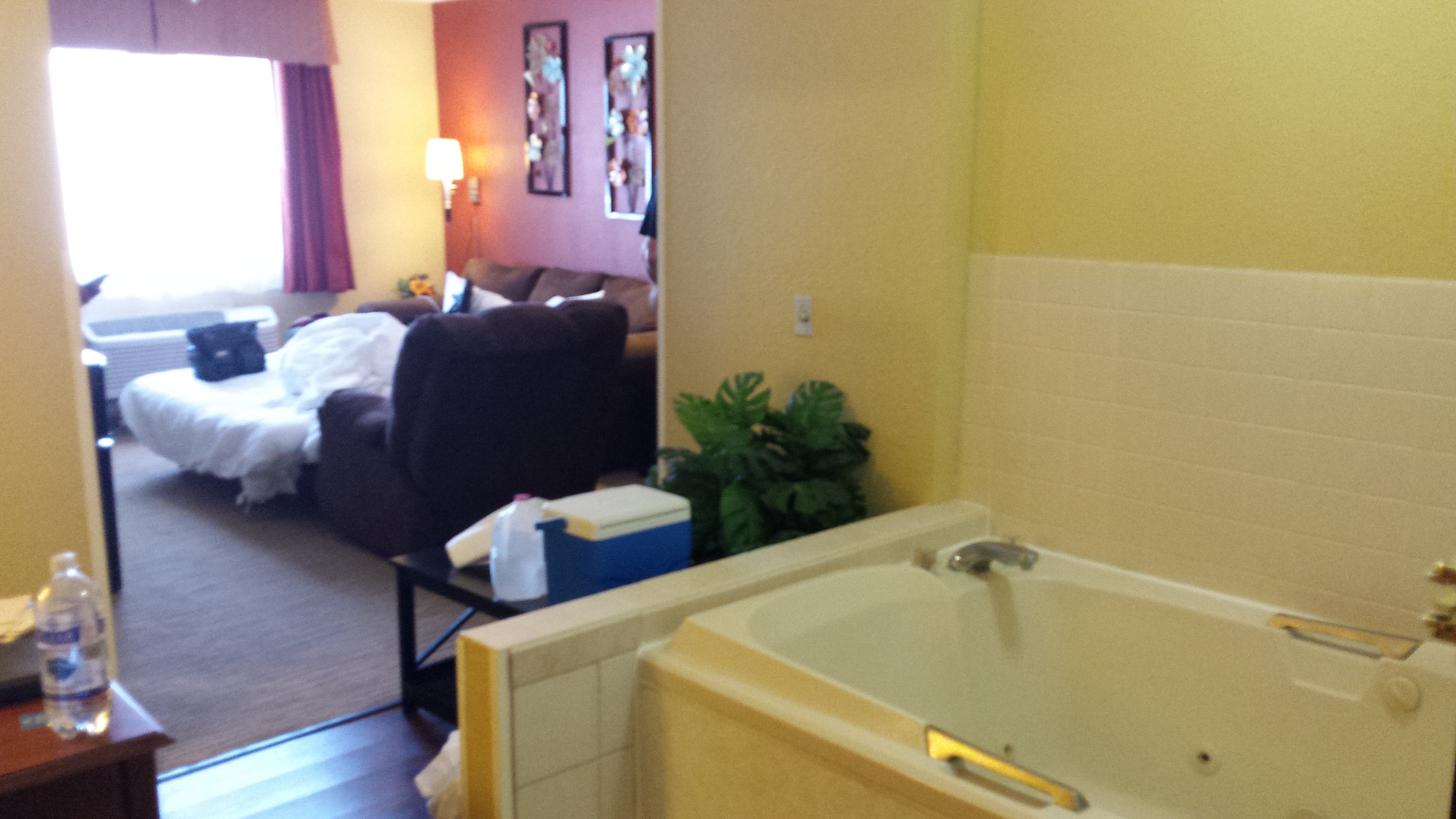 This was the same hotel whose desk attendant looked at me with bemused blankness, as if he’d never in all his days heard such a request, when I asked for some extra blankets.

Whilst driving at length between interesting places, I worked on Aku Soku Zan(za), and made some decent progress despite a distracting audiobook playing in the car and the impossibility of drowning it out with music on headphones. Why, you may ask, didn’t I just listen to the audiobook? I’ll tell you.

Some years ago, I gave mom Howl’s Moving Castle, and eventually (like maybe a year ago) she finally listened to it. And she fell madly in love with it, and now she listens to it all the freaking time. I don’t think I’ve gotten her to listen to a single new book since then, ’cause she puts Howl’s Moving Castle (and sometimes its so-called sequels) in between, like, everything else she reads.

So guess what we were listening to in the car -__- I love Howl’s Moving Castle, but I am getting a little tired of it, so I played a bit with Zanza and Tokio instead.

The trip overall was a lot of fun. Now I can attempt to get back into the swing of real life!! Gotta amend my weekend to-work-on list, since I’m off ASZz now and need to rotate onward to HR.