The Test — This story is at a point where I feel safe declaring an actual anticipated release date: New Year’s Day for reals. In all its forms, too! So freaking exciting! I’m actually kinda tempted to put it up simultaneously on Ao3 and ff.n, because it’s been a verrrryyyy long time since I posted anything new on ff.n, and I’ve never posted anything new on Ao3. It might be kinda cool to have it go up all over the place all at once… but I also might not bother XD

I’m hoping readers will forgive some characterization choices here that are similar to those in some of my other GW AU’s. We’ve got run-your-life Quatre (a bit over the top this time) and shades of Dwufei (alternately called Nerdfei, though I’ve been much kinder to him here) from HoH, and I’ve already mentioned college-student-cum-visual-artist Heero (though this time he’s an actual art major instead of physics), but I don’t think I mentioned his Rose Pale speech pattern (which I may actually retain for more future stories). None of them are direct copies of their characterization elsewhere, but the similarities are in some cases great. It kinda bugs me a little, but that’s the way the fic works.

Anyway. My cold persists, and if anyone actually listens to the recording, they’re definitely going to be able to tell XD But the recording editing (and editing of the recording) is progressing well. I have recorded all but the final segment of the story, and am working on the editing of the penultimate segment. That is the longest part (its recording is about half an hour), and was also the last to be written and therefore had been edited least when I hit L.C.. But the recording editing stage is the final editing stage (before first publication), so obviously I’m far along. Sincerely, website.

And it’s funny how that contrasts with end-of-project excitement. You’d think the two would cancel each other out and I’d be in a pretty normal state of mind, but they somehow manage to exist simultaneously. And since the one thing they both really want is to get the thing posted (one so I can stop thinking about it and the other because I’m eager to share it with everyone), I have to make sure not to slack off on the final work that needs to be done and succumb to the desire to post something unpolished earlier than I should XD

P.S. Duo talks with his mouth full a lot in this story. You notice things like that when you’re making a recording.

Sano’s Badass Adventure — I know, I haven’t touched this in forever! I had to work on Saturday — a phenomenal waste of time, since the excessive snow limited the number of clients that came in to literally five but we still stayed there the whole agonizing morning watching the snow continually pour down and make the roads even worse (which is saying something) than they were on the way in — and I’ve mentioned before how that affects my productivity on that day if not throughout the weekend. TLY didn’t happen at all, which was sad, but I did open up SBA and playtest everything there was… which was super fun and made me want to work on it… which I did.

I am on the very last scenario for Ikkinzome. At least I think I am… it was difficult to remember, after so long, whether I’d finished the previous scenario or left it dangling, but playtesting it several times through didn’t disclose any loose ends, so I’m pretty sure it’s time for the next one. Much as I love Ikkinzome (and I do love Ikkinzome, so much that he’s going to appear elsewhere in the game eventually), it’ll be so exciting to move on to the next suspect.

I also did the usual post-playtesting touchup of various things. I can’t quite figure out what causes the lantern switch to be turned on at the beginning of the pre-Saitou’s-quest night patrols… and what’s really annoying is that there are some glitches that appear while playtesting within RPG Maker that don’t appear while playing a compiled version of the game, and I don’t know if this is one of them. I confirmed that the lantern switch goes off in both the cave and the mine, so I don’t know where it’s getting turned on and left on.

I also filled up The Corner bar, finally — and only noticed just now, making this post, how many redheads there are in there. Witness: 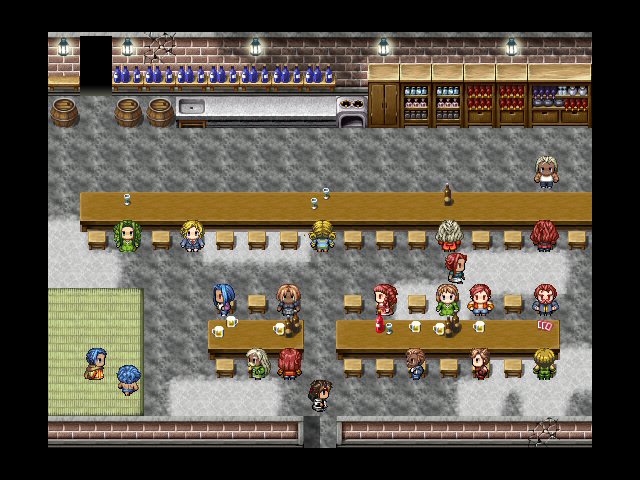 Areas of the game get populated soOoOo slowly XD I gave Kaoru a few trainees as I’ve been meaning to do for forever too, but Terasu is still completely empty except for Yahiko. Even Sanotown needs some attention on that front, and all of outdoor Keikan seems like a ghost town.

Anyway, it’s still fun as shit to work on this, and I’m glad I’ve come back to it. Yeah, I’ve got stories to write, but sometimes I’m just too tired, you know? So messing around with an RPG is awesome.

P.S. I just looked back at the previous PL in which I mentioned working on SBA — which is kinda part of what they’re for? — and noticed that I specifically said Ikkinzome’s fourth scenario was finished. So there you go.

Aku Soku Zan(za) part the seventh — I don’t really have any new thoughts on this since last time. It’s up!