The Test — Since these are my final thoughts on this story for now, they will be a bit spoilery if you haven’t actually read the fic.

This is the most patchworked audio recording I’ve ever made, due to the much more thorough recording-editing phase of this story than any previous. Also due to the cold that still isn’t entirely gone. I’ve re-recorded a few of the hoarse cold lines and made them fit in a bit better, but a lot remain… I’ll have to get on those eventually, but for the moment I’m kinda tired of working on this. Listeners, should there be any, will just have to forgive the inconsistent nature of this recording.

As I’ve gone through the story so much here at the end of getting it post-ready, I find my biggest complaint is that the intro section (the two scenes in Heero’s art class) is a little too long, as if intended for a longer story on the whole. The reason for that is the good old “started the story without a terribly clear idea where it was going and how, and got stuck with some stuff that didn’t entirely fit once the plan fell into place” situation. I don’t think it’s too awful, and it may be something I can mend a little in future, but it is a complaint.

Also, in the dialogue-only segments, Duo has a concept of Trowa’s “craziness” that’s a little overblown for what the reader discovers he’s actually seen/learned of Trowa at that point. This is not something I choose to change, since it plays in well with the foreshadowing; it’s just slightly illogical.

Duo’s implication of completion in gender/sexuality/relationship representation at Heero’s house does not necessarily reflect the opinions of the author. Also, the author does not believe that the behavior of Heero’s friends in Testing everyone he tries to go out with is appropriate… though it did, in this situation, lead to Duo (so there I go again rewarding my characters for bad behavior).

As is often the case with a slightly longer story, I’ma have to wait a few months for distance and then come back and see how I really feel about this one. But I’m happy to have it posted, especially in its different formats, at the very least so I can stop thinking about it. No matter how much some of the lines in the recording stand out XD

Sano’s Badass Adventure — Woo-hoo!! I (‘m pretty sure I) figured out where the lantern switch was getting turned on and left on! That is such a relief.

I started making two towns, Roku and Oniwaban, mostly because I need Enishi (who lives in Roku and sells ships) to be around already. Aoshi’s quest (which I really shouldn’t be working on until Saitou’s is done, but I’ve mentioned how tedious Saitou’s quest is to work on at times) depends on Sano having a ship. How Sano, whose state of unemployment is a running joke in the game, is supposed to get something that expensive, I haven’t quite decided yet. A subquest, probably. Or maybe he can get hold of one during Misao’s quest, which will involve ships at its end…

Anyway, here’s a bit of each town so far: 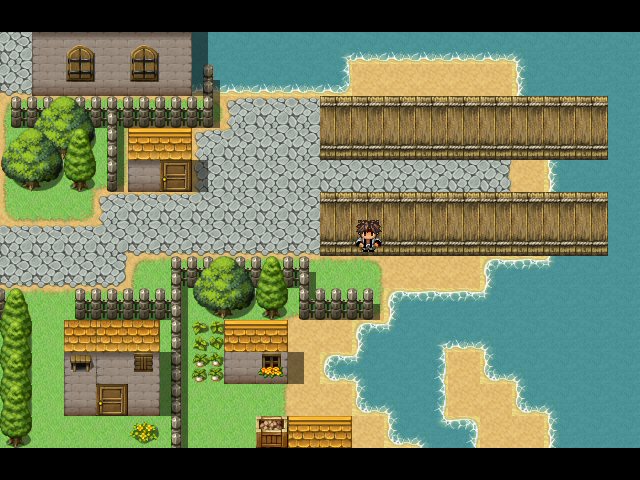 Yeah, there’s nobody there yet. Also I made all that beach with the “dirt” tiles before realizing it, and I’m not going back and fixing it, because I put all that stuff on top of it and it would just be too much work. Too bad. Roku has dirt beaches. 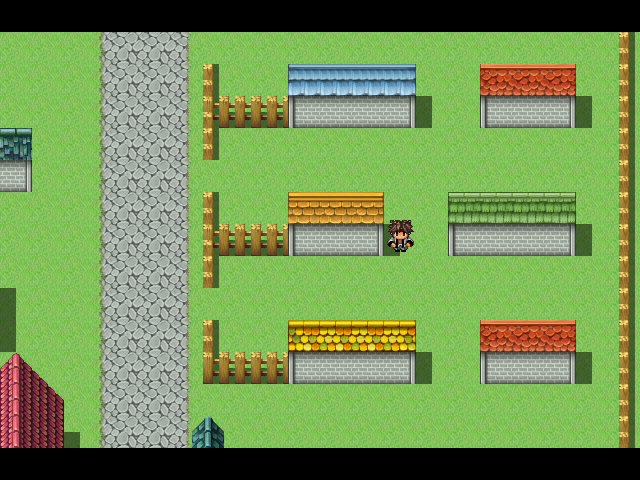 And Oniwaban is not done. There’ll be a lot of stuff between houses, and some trees and flowers and stuff. It has all the roof colors. It’s kinda creepy to walk around in at the moment, though, because I haven’t even assigned it music yet XD

Then I went a little crazy with the ship, making sure you can sail it all around the ocean and up the rivers (under the big bridges, which you can also cross perpendicularly on foot), and creating belowdeck cabins in which you can “camp” on the camping map. I still haven’t really decided how Sano’s going to get this ship, but we’ll get there. For now, it’s super cute, and you can get to the island where Aoshi’s quest takes place, so that’s good.

TLY — Not much to say about this one right now, except that I’ve somehow gotten myself into yet another sort of transitional spot that I’m not terribly interested in. How does this keep happening? And how much trouble am I setting up for myself when large-scale editing time rolls around??

Heretic’s Reward chapter 23 — And here I’ve gotten myself into yet another chapter that may have to be divided into two and therefore may end up as two too-short chapters rather than one too-long chapter. Decisions!!!

I know I’ve mentioned that I’m working from the script I drew up back when this was a comic rather than a prose story. It’s mostly dialogue because I’m able to remember the action fairly well and didn’t feel the need to write it down. Anyway, I’ve gotten to the point where even the script is uncertain about chapter divisions and is mostly just an endless string of spoken lines. So probably every chapter, going forward, will face this same length/division dilemma. Ah, well.

We are (as I’ve also mentioned) done with the previous section of the story wherein most of the action is told in flashback during Sano’s reports to Hajime at the inn. And even though I kinda liked the cozy, relationship-building feeling of the multiple inn sessions, it’s always exciting to finish one section of story and move on to another.