My little dog Hiko has swallowed a wire of some sort. He’s staying at the full-service vet overnight getting fluids in the hopes it will flush out of where it’s been sitting and pass through his digestive tract. A third set of radiographs in the morning will give a new perspective, and then I can decide whether or not he will have very expensive and scary abdominal surgery.

I am exceptionally sad and worried right now. Please to be keeping Little Man in your thoughts.

Here is a picture of him sadly hiding in the closet because he was in pain. Suffering was never so adorable T__T 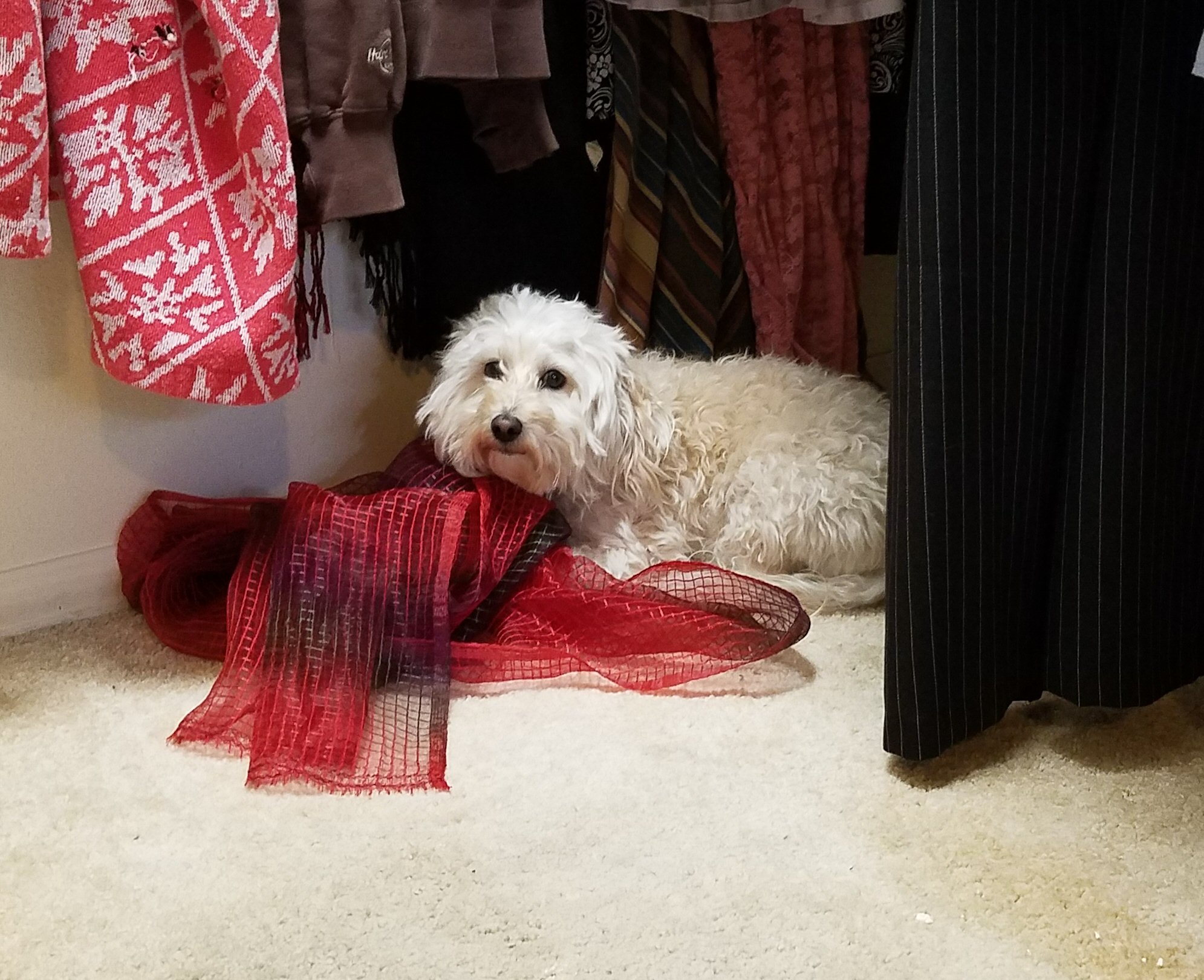 EDIT 9:45 AM: The wire has not moved at all, despite the fluids and some food. He’s going to surgery.

EDIT 1:30 PM: He is out of surgery and doing well. The wire was embedded in his duodenum, which is why it wasn’t moving, but the doctor says there was very little inflammation at the spot and he’s confident of a good recovery.

I am so relieved I can’t even.

EDIT DAYS AFTER THE FACT: I figure I’ll put down the actual sequence of events in greater detail so as to have a coherent record.

On the Tuesday that was my last day off work before returning after my own surgery, at around noon I noticed that Beeks was declining treats and hiding a lot (as pictured above). My immediate concern was foreign body, and I started watching carefully for signs of intestinal obstruction. There were no such signs, however, so I was a bit puzzled. I thought maybe he had a little bug, and resolved to wait and watch. (Later, since my “guess” {intuition} turned out to be correct, I regretted not taking him to a full-service vet that day when I was free.)

Overnight, I noticed he couldn’t seem to get comfortable, and one time he actually got up and went to hide in the closet again, though I put him back on the bed. On Wednesday, before work, I was noticing kyphosis and apparent discomfort in general but especially when sitting down. He was still defecating normally, so I was still at a bit of a loss, and in any case I had to go to work.

At work, however, I received a text from my mom (Hiko takes a nap on her bed from the time I leave to the time she gets up) saying that she’d reached over to pet him and he’d snapped at her. Now, Heeks is the sweetest and friendliest dog in the world, so this was the final sign that something was very wrong. Since dad was working from home that day (THANK FUCKING TOLKIEN, since mom’s MS would have made this very difficult for her), I requested he take Little Man to a full-service vet.

(Of course at this point mom wondered why one of the doctors at my clinic couldn’t look at him, which surprised me a little — I’ve been there almost three years; surely she must understand by now how limited a clinic we are? Most pertinently, we don’t have an x-ray machine.)

I’ve actually had no need whatsoever of a full-service vet… um, ever… because I’ve never had an animal sick or injured before, and my own clinic suffices for the things we do (vaccines and spays/neuters). Which means I wasn’t on file anywhere in town, and had to choose a clinic to send Leeko to. I chose the place I did my internship at, because I liked them so much, and I was pleased to find that some of them there actually remembered me even after three years! How cool is that!

Anyway, dad took Teeks in there, and after a while texted me the images from the first set of radiographs: 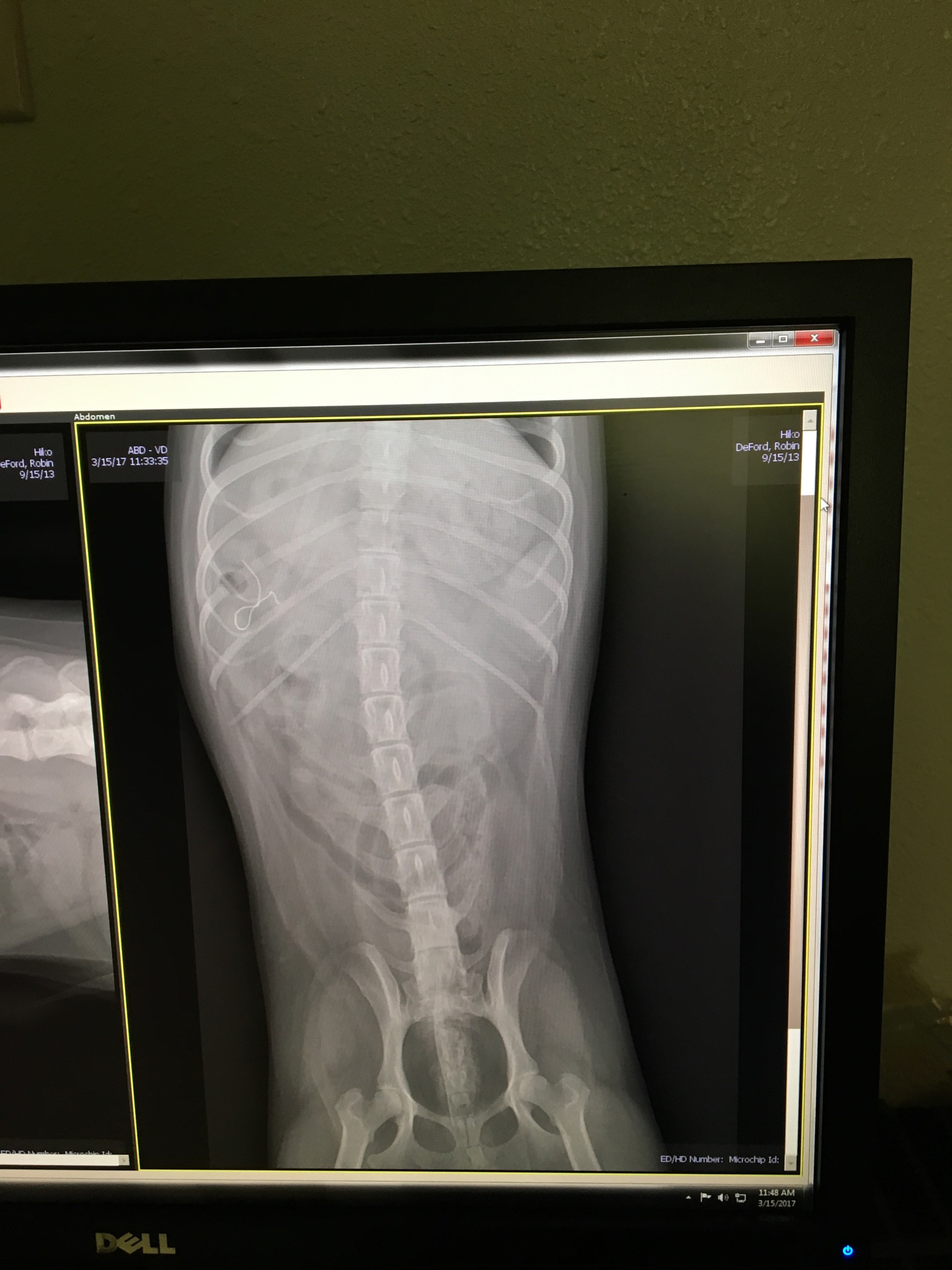 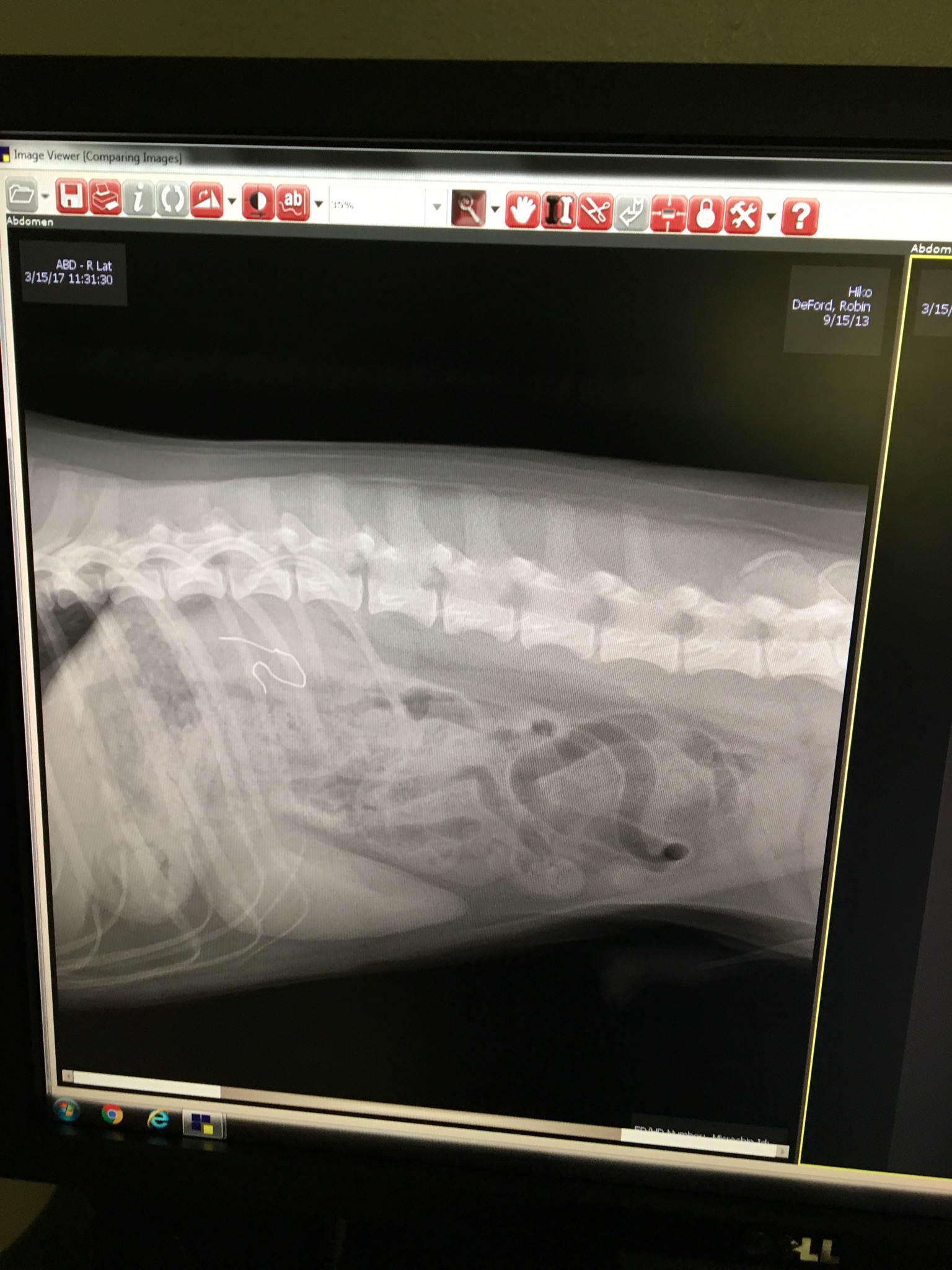 I knew instantly what that was. I have these bead curtains on my bedroom door that are composed of long wooden beads held together with stiff wires. I’ve caught Beeks chewing on fallen beads before, but I didn’t think he’d be silly enough to swallow one of the wires. More fool me -__-

Anyway, they kept him at the clinic giving him fluids and planning to take more images at around four in the afternoon. If the wire had moved at that point, they thought he might be able to be sent home in the hopes that it would pass. If it had not moved, surgery might have to happen. So I got to fret all day about that.

In the evening, the new radiographs revealed that the wire had not budged. The doctor I spoke to said that it was still possible it might move, but that surgery then and there was an option. I chose the middle ground, having him stay overnight (so I could fret more) and receive more fluids, then see how a third set of images looked in the morning.

In only tangential news, I’m trying a new sleep medication, and it had proven remarkably ineffectual up until this point. The doctor had told me I could go to two pills a night if just the one wasn’t working, and I thought this particular night — extremely worried and without my little dog to cuddle — was a perfect time to give that a try. And I’m cautiously hopeful about the outcome; I seemed to sleep OK that night and on subsequent nights with the double dose.

On Friday morning, a different vet from the full-service clinic called me (he was the one that specifically remembered me from my internship) at around 8:00. In fact I had a client in my exam room, and she was very understanding about my need to take a phone call in the middle of getting her dog checked in. The vet said that the wire had once again not moved at all, and he thought surgery was the next step. So I gave the go-ahead, and then could not stop absolutely freaking out for the next three hours or so.

When he called back, it was with the information I mentioned above: the wire had lodged in Hiko’s duodenum, allowing for the flow of fluids and even food through his digestive tract but causing him constant discomfort. It was removed with no problem and only a small incision into the duodenum, and he was all closed up and waking up from anesthesia with no complications. I cried and cried of relief and joy, and texted everybody.

My thoughtful supervisor and head doctor had been just about to allow me a long lunch to go visit Little Man, but the vet on the phone specified that I could pick him up that afternoon, so there was no need for that. It’s not impossible that my co-workers just wanted me to go see him because I was so completely useless while I so worried about him XD

That evening, when I went to the full-service clinic, I found a very groggy Beeks that nevertheless wagged his tail at me the entire way home. Also they’d saved part of the wire for me to look at, and I was confirmed in my assessment of its origin. I love my bead curtains, but I love my dog more, and they’re getting thrown away as soon as there’s space for them in the garage trash cans (we forgot to take the trash out, so those are all full XD). For now they’re still hanging up, because hanging up seems safer than lying down somewhere.

So that’s about the whole story. As I mentioned about, it cost me $1,500, which is very inconvenient right after I had surgery, but still about a thousand dollars less than I expected and pretty reasonable for the services he received. Poor little guy. I’ll only add at this point that Peeks has always been extremely difficult to pill, and with two antibiotics, an anti-inflammatory, and a pain med, we have a little rigmarole every twelve hours now. Pill Pockets worked exactly once :\

I love my dog.