Things Batman Doesn’t Like — One thing you notice when making a music video from western animation rather than anime is just how cheaply produced anime is. In some of my anime music videos, there have been sequences where little more on screen than a character’s mouth is moving, and therefore I’ve been able to remove those mouth movements very easily to avoid distraction or the appearance of lip sync I didn’t want.

Not so in western animation! Or at least not in Batman – The Animated Series. There were two spots specifically (“I wanna like it” and “That’s not eating at all”) where I would very much have preferred to remove the mouth movements, but the characters move so much more dynamically than in anime… it would have been way more trouble than it was worth to try to edit a closed mouth onto a moving, rotating figure. Sad day.

Overall, though, I’m extremely pleased with this music video. It’s still pretty remarkable to me how much footage there is in that show that very precisely fits that song; it’s almost as if BNL was watching BtAS when they wrote it and actually had Batman in mind XD

Since I knew nobody around here would watch it, I made all my co-workers (including all three doctors) watch it at work. And they all laughed and laughed, so I’m pretty satisfied. Since it’s totally G-rated, I made my family watch it too! I can’t share a lot of my art with them, so that was kinda cool. Now it can languish in obscurity for the rest of eternity with my other music videos. Still, I had a very good Batman birthday.

Speaking of my birthday, archive stuff happened on that day because I really felt like editing stories instead of new writing and it was my birthday so that’s what I did. I’ve gotten Saitou & Sano one-shots all the way up through Inappropriate Methods edited, so that’s the entire Collection 1. So I updated the ebook files for that collection, which makes me happy.

And I’ve decided that I’m tired of languishing in obscurity. Among other things, I’ve got 116 stories on this archive, for fuck’s sake, and supposedly 27 email followers, but I get almost zero feedback on anything. It’s true I create art for myself first and others second, but… well, I’ve gone on about this before.

The point is that I’m going to start advertising more. I’m working on putting more shit up on AO3, and ff.n more slowly because that site sucks so bad, and I’m thinking about maybe doing a bit more on Tumblr even though I don’t like that site all that much either. If after a while I still feel completely forgotten and obsolete, I’ll… probably crawl back here and cry.

Another thing I’ve decided to do… I used to write author’s notes for stories and put them at the ends of those stories, but I don’t really do that anymore. However, I often have relevant and possibly interesting thoughts about stories or chapters of stories in my Productivity Logs. So I’ve decided to start linking to those just in case anyone’s interested. Hah!

Heretic’s Reward Chapter 27 — Aight, interesting experience writing this chapter. In my original plan, I had Sano and the Visitant fighting Shikijou and Hannya at the doors, but obviously I swapped Hyottoko in for Hannya. I was happy to be able to provide both of the men that the devoted in the market believed were going to eat them out of shrine and home, but that wasn’t the reason I made the change.

Thing is, I see Hannya, as a warrior, as being in a class or two above Shikijou, and maybe four or five above Hyottoko. I felt like having him fight my friends would make the battle — and the damage they took during that battle — more dire than I really wanted it to be. So Hyottoko got to pinch-hit, as it were.

But Hyottoko… well, Hyottoko weighs, like, a ton and is, like, twelve feet tall and has a bag of oil in his stomach. And that’s… I can’t… I just…

I mean, I love him in canon along with every other ridiculous and implausible character or circumstance Watsuki threw at us. But for my story I decided to… tone down both his physical proportions and his fighting style. And how absurd is it when you’re toning down a canon character for your fantasy AU?? XD XD XD

He’s still really big… just… more like an actual human. And I actually didn’t specify what his fighting style is here, just indicated that it involved oil and fire and left it at that. Since this is basically a cameo, it’s unlikely we’ll ever learn more about him, and I feel safe with the choice I’ve made. Safe and ironically amused. 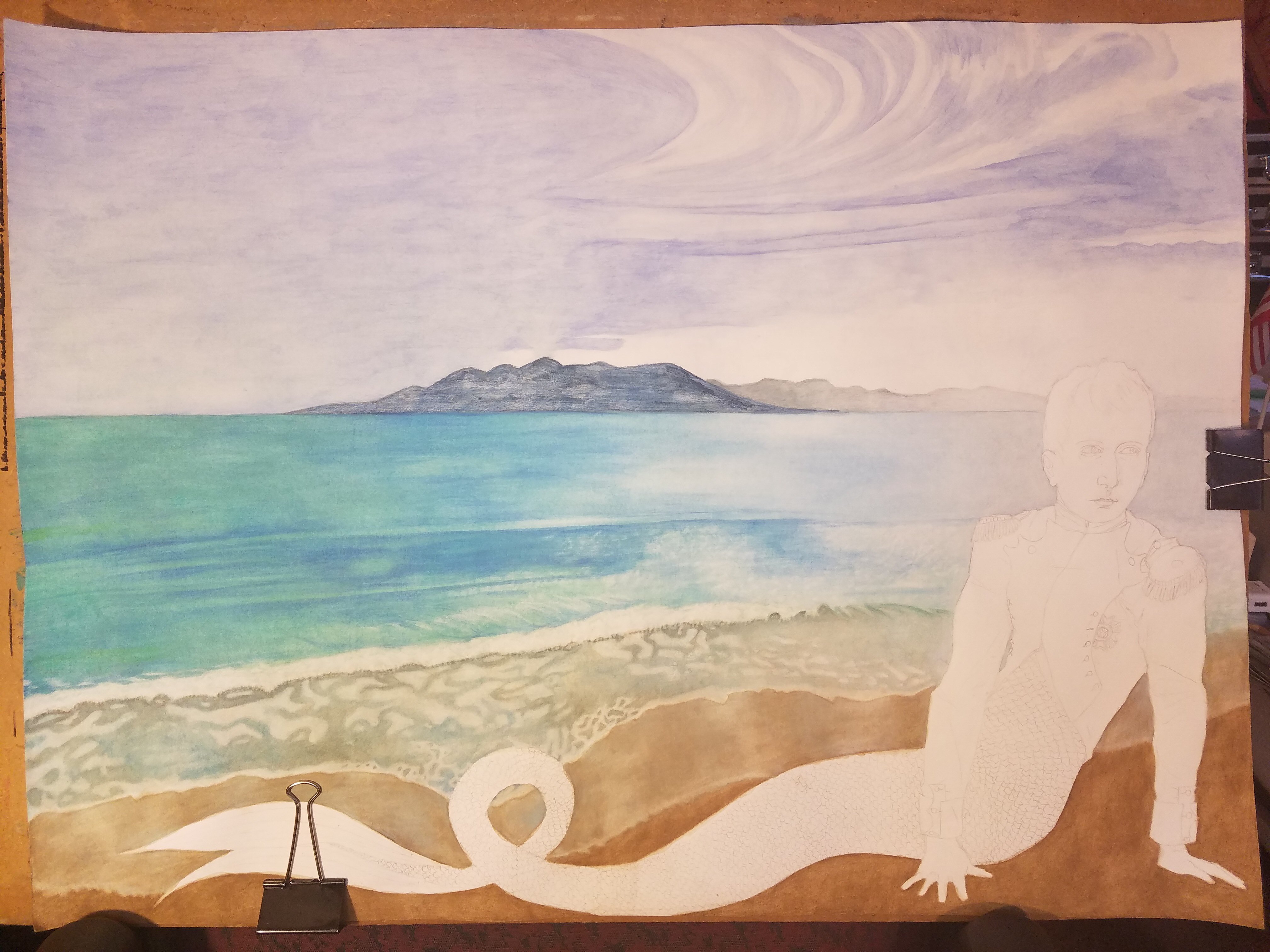 Cloud time! This starting blue is way too warm for the entire left half of the picture, but it wasn’t a bad base. 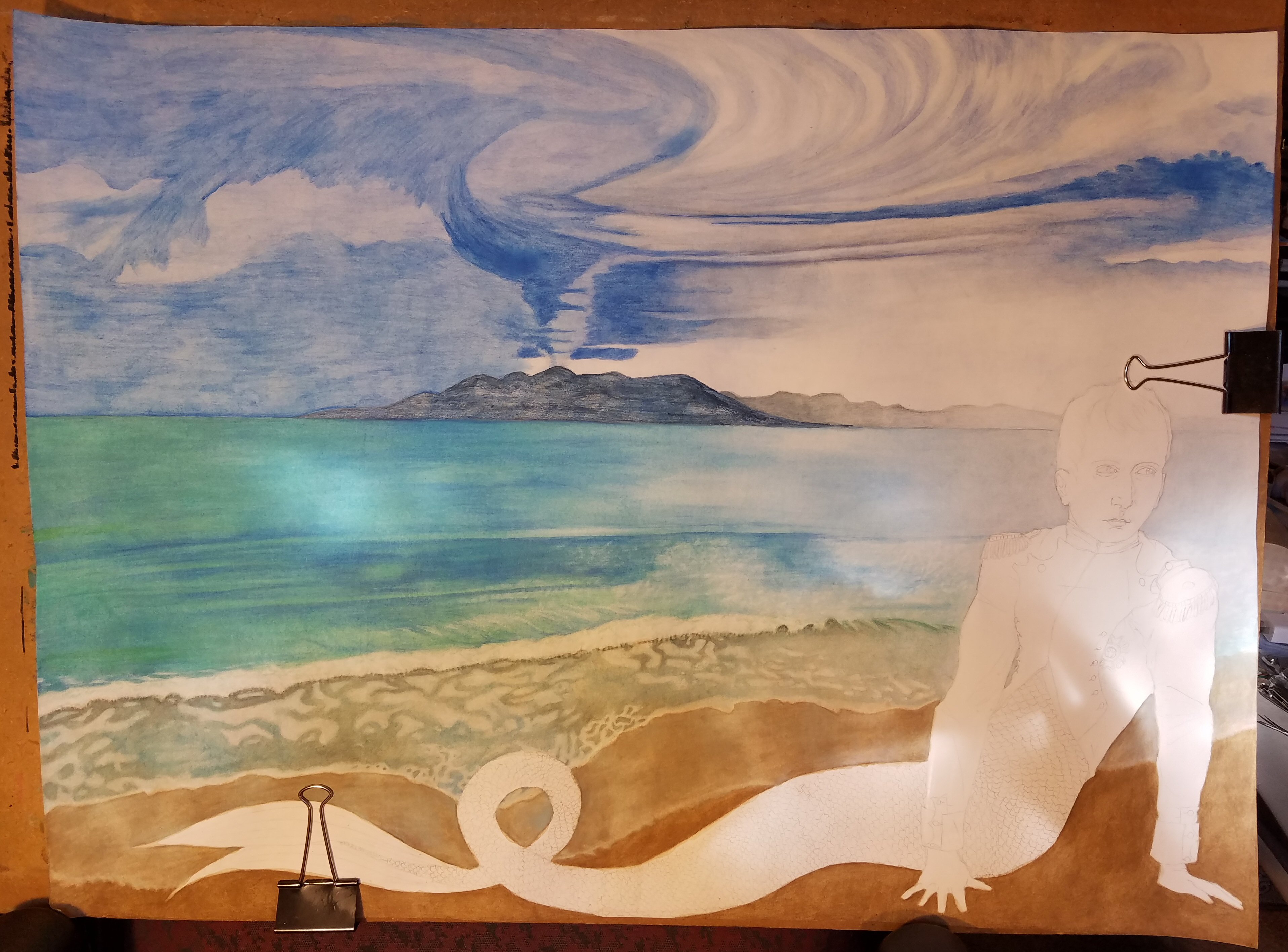 This is what happens when I take a progress shot in the morning when the sun’s coming in this one particular window in my room. You can see the clouds clearly enough, anyway. 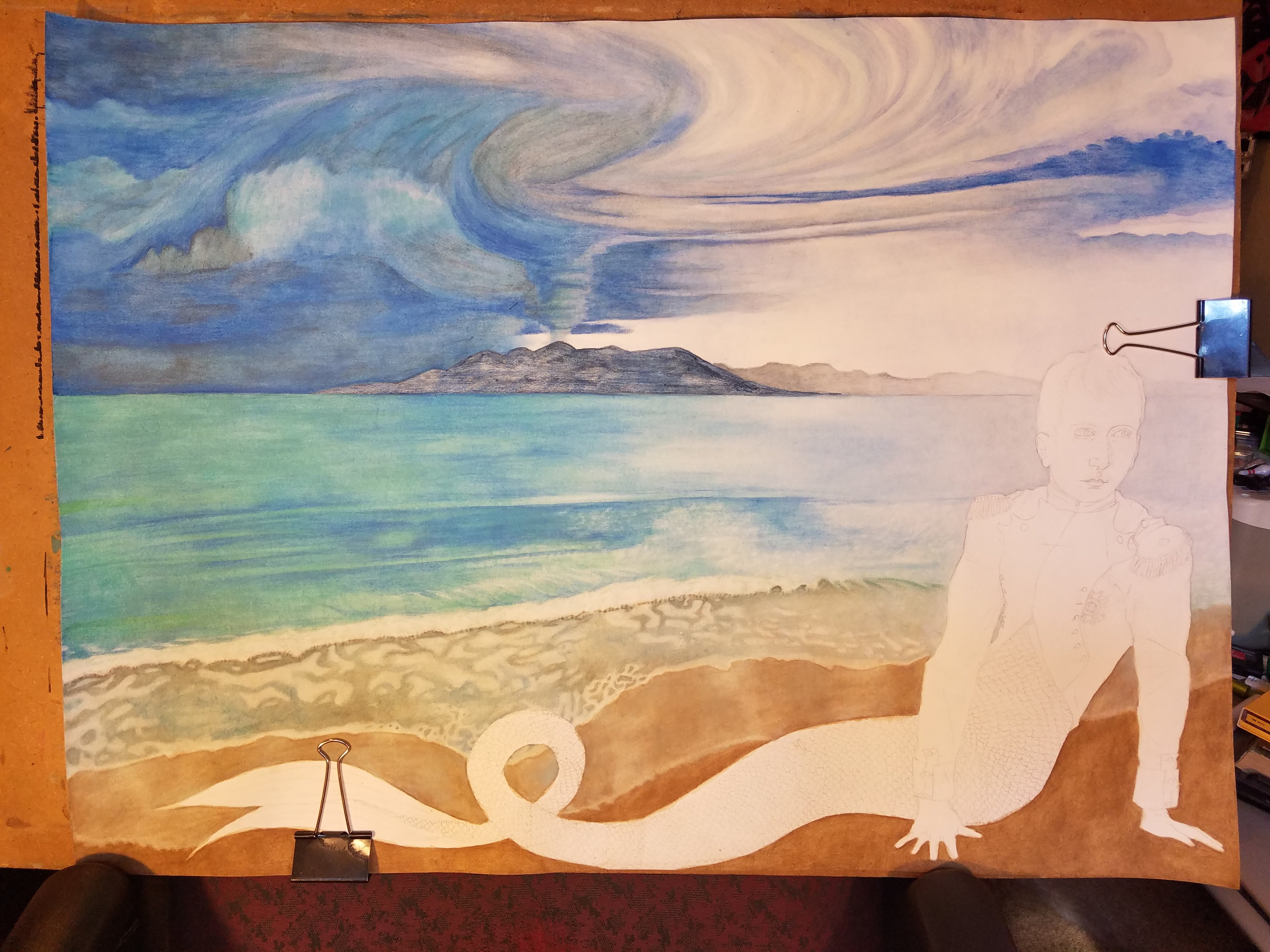 If I thought the ocean stuff was hard to draw, I had no idea what I was in for with these clouds. You can see I skipped taking progress shots for several steps here; ah, well.

It may seem like I actually haven’t been all that productive lately, but honestly I think I may have forgotten some of the things I’ve worked on since my last log. Also I had to work (pay-style work) this past Saturday, and you know what that always does. Anyway, looking forward to a normal Saturday this week followed by ASZz on Sunday!