We begin with Hiko resting his lil chin on the bed on the bed: 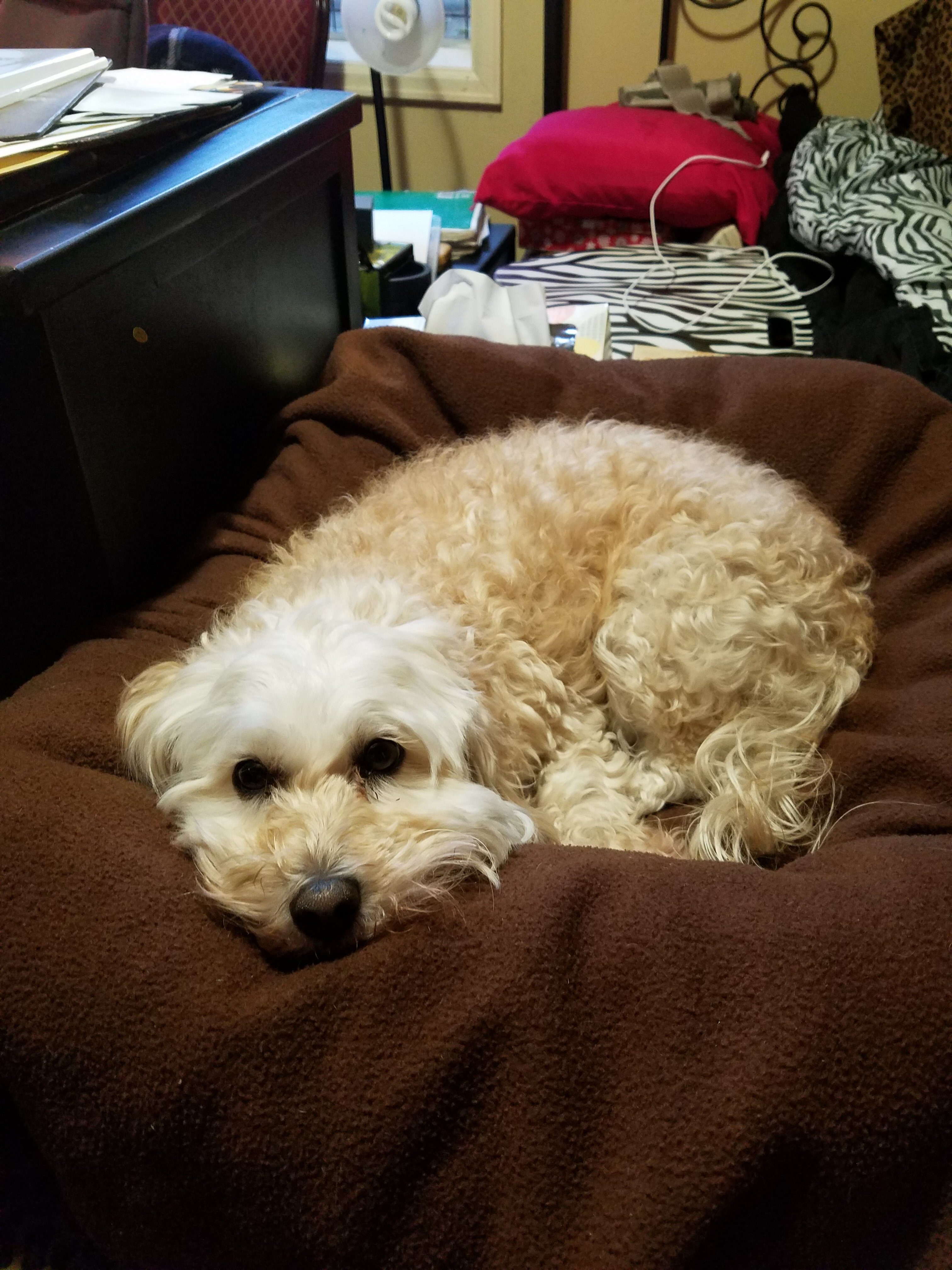 My co-worker was complaining about people putting olives on pizza, so I promised her that the next time I got pizza I would get extra olives on it and take a picture just for her. 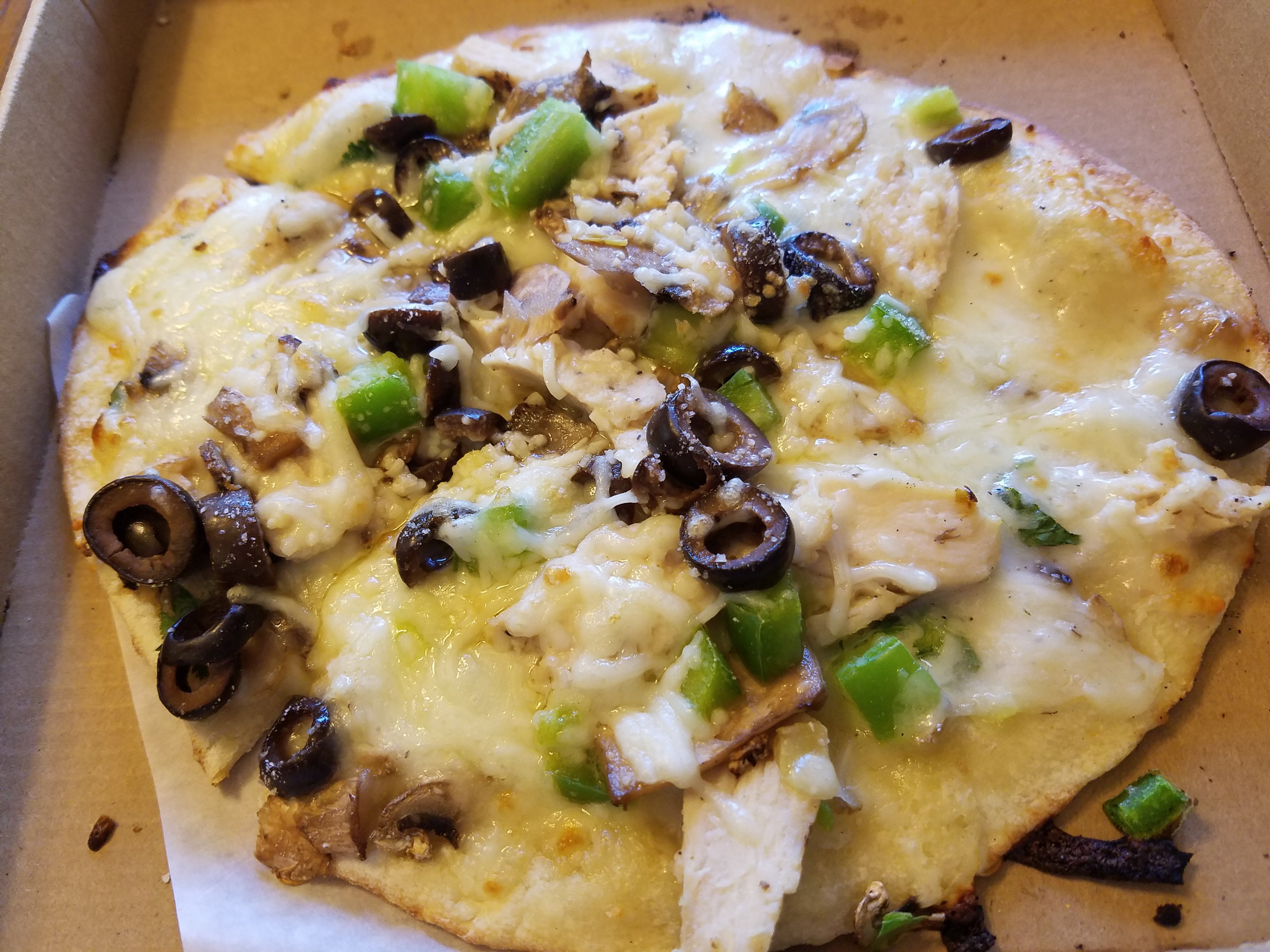 As you can see, they didn’t give me extra olives, just some olives. And actually I forgot to show her the picture. Fail all ’round.

Here are Waybee and Beeks cuddling with me and also, yes, my boobs: 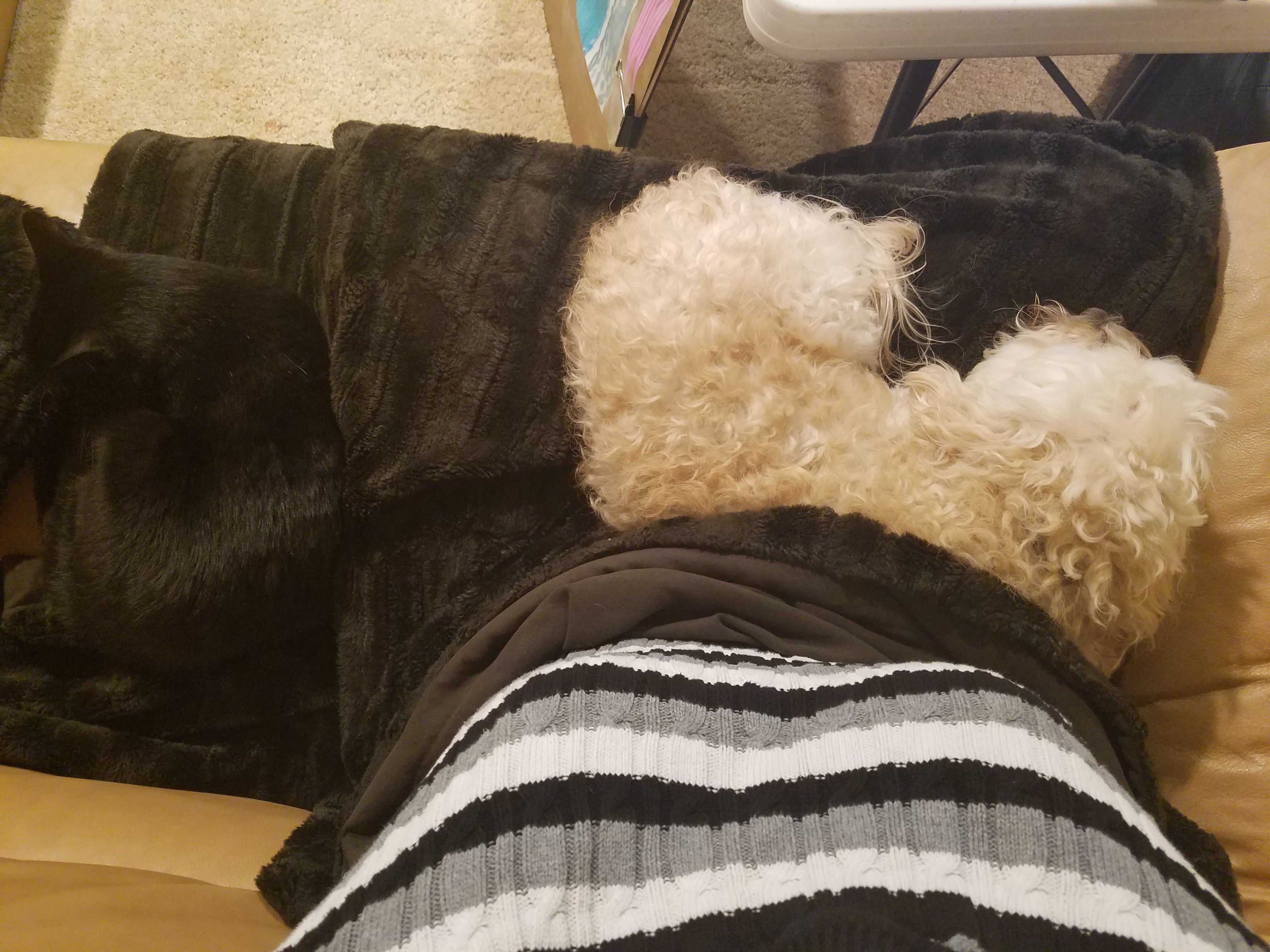 I thought it was high time I got an updated picture of my first tattoo from so long ago: 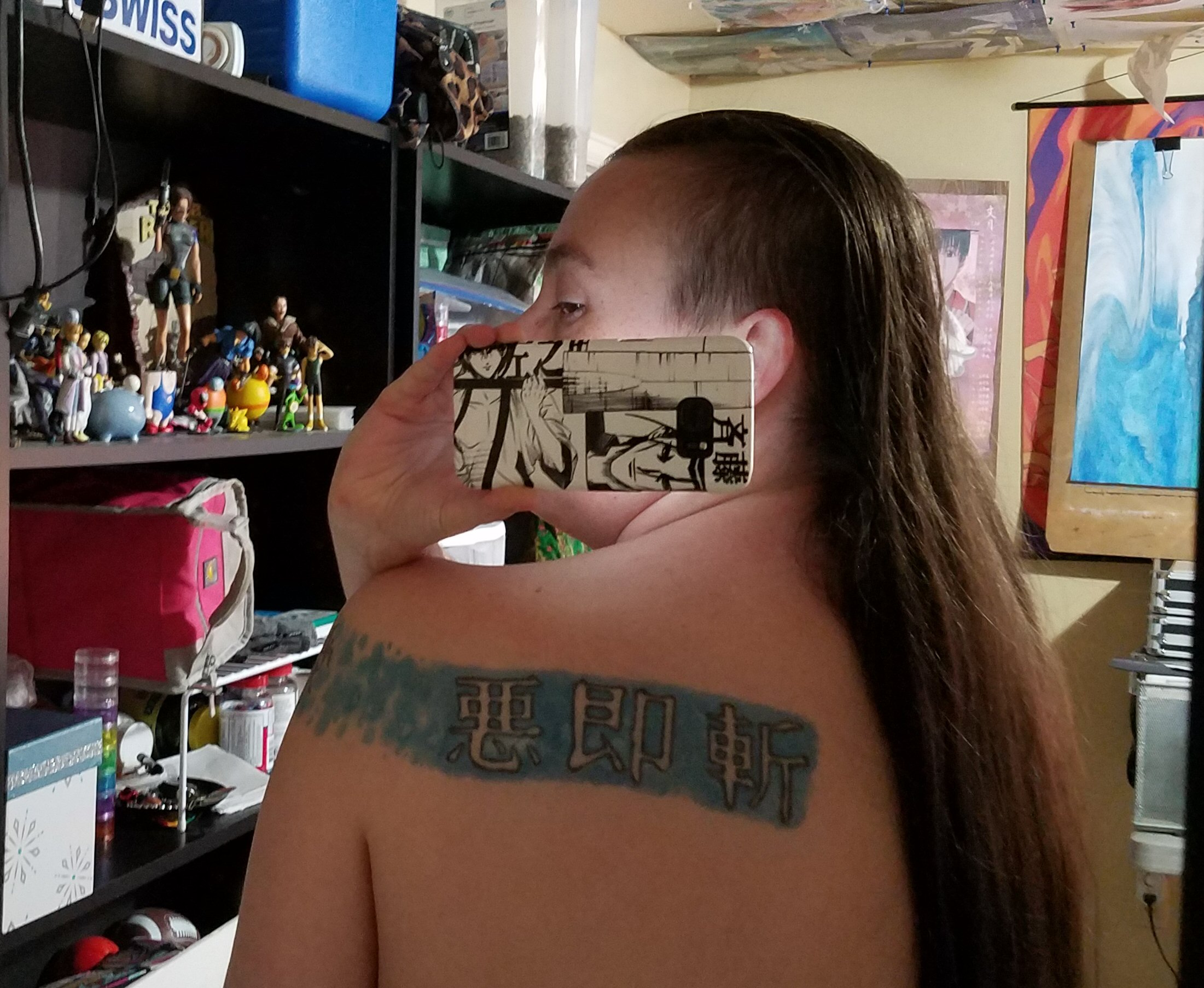 You guys, check out this donut: 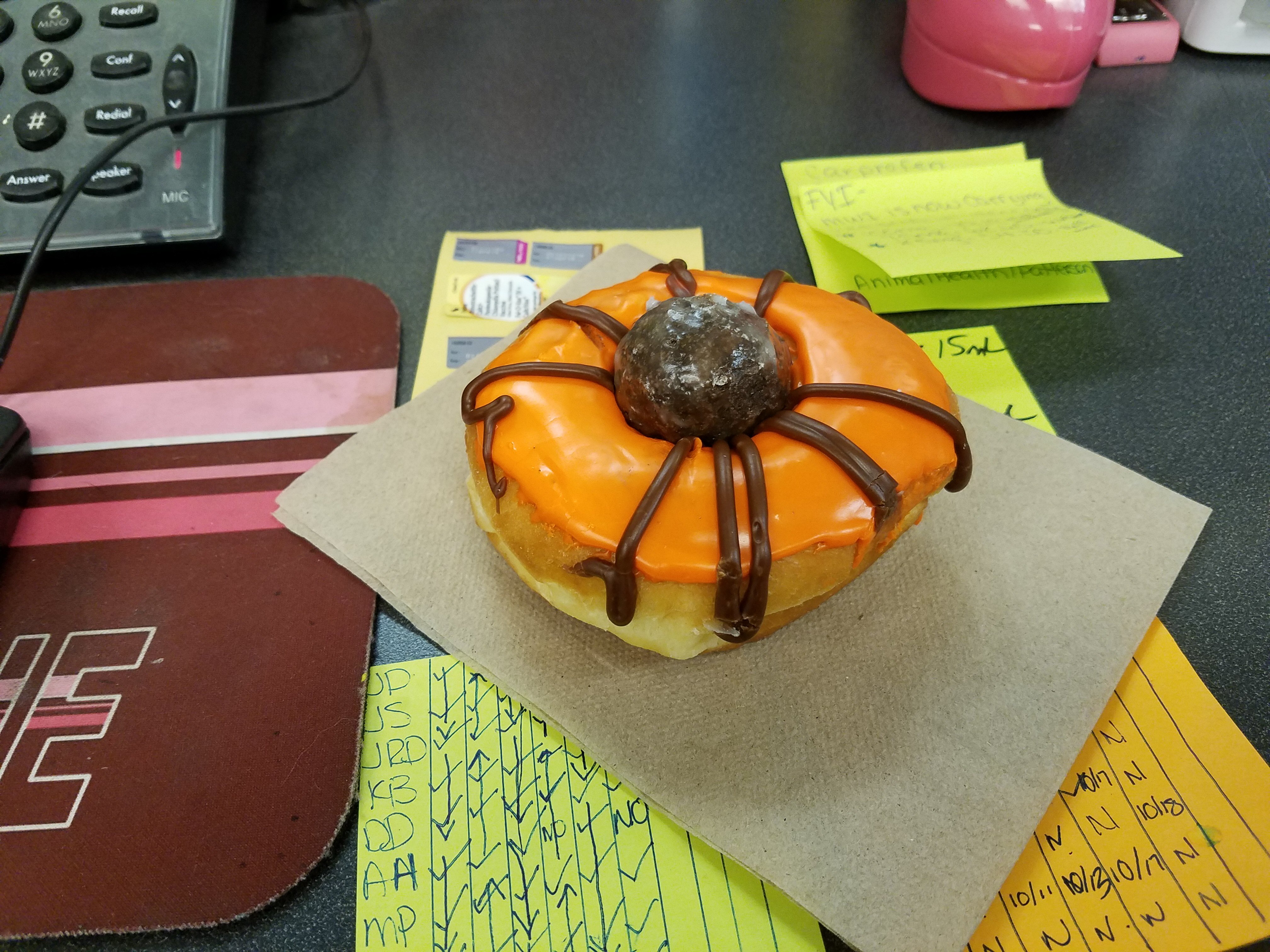 JUST CHECK OUT THAT DONUT. IT IS THE PINNACLE OF HUMAN ACHIEVEMENT. Doc brings in donuts every Thursday, and, though I don’t eat sugar much anymore, I had at least to document that one.

For those that don’t know, I go by my middle name Robin. I thought it would be pretty awesome to dress up as BtAS Robin and be a smartass about introducing myself. At one Halloween event I met this Jedi whose costume was freaking amazing, and had to get a picture with him. He couldn’t turn his lightsaber on because the light ruined the shot. 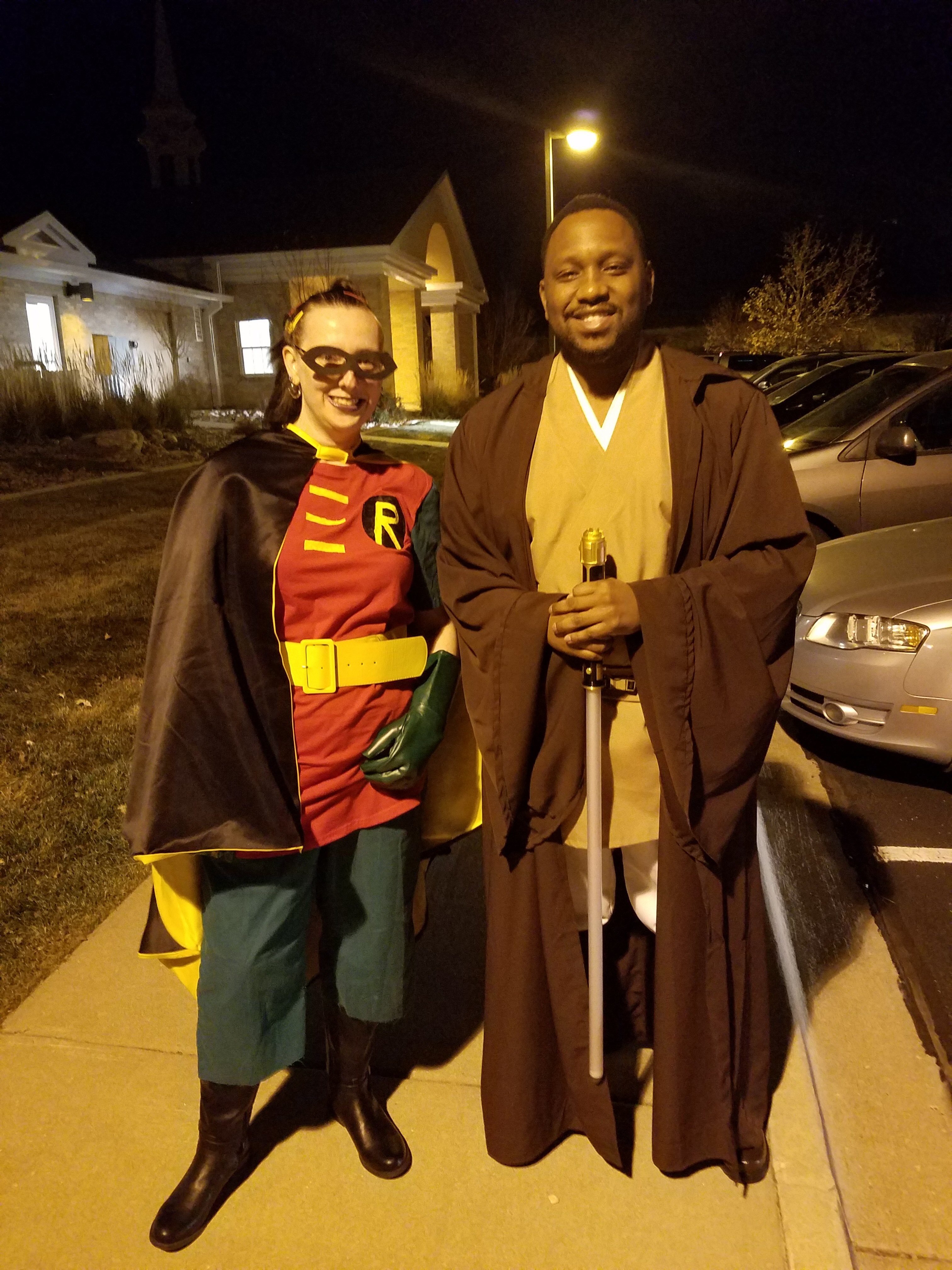 I used the bottoms of those pants (they were scrub pants, incidentally) as the sleeves for the shirt because that was the easiest way to get matching greens (and, wow, that lighting really highlights how well the gloves’ green doesn’t match), but that left the pants just a tiny bit short. They popped out of my boots pretty well every time I moved, so that was annoying. That Jedi tho.

Next, a story. Often when I’m folding my clean laundry, Lil Stripety comes in and helps me, and I tend to put socks on top of him. 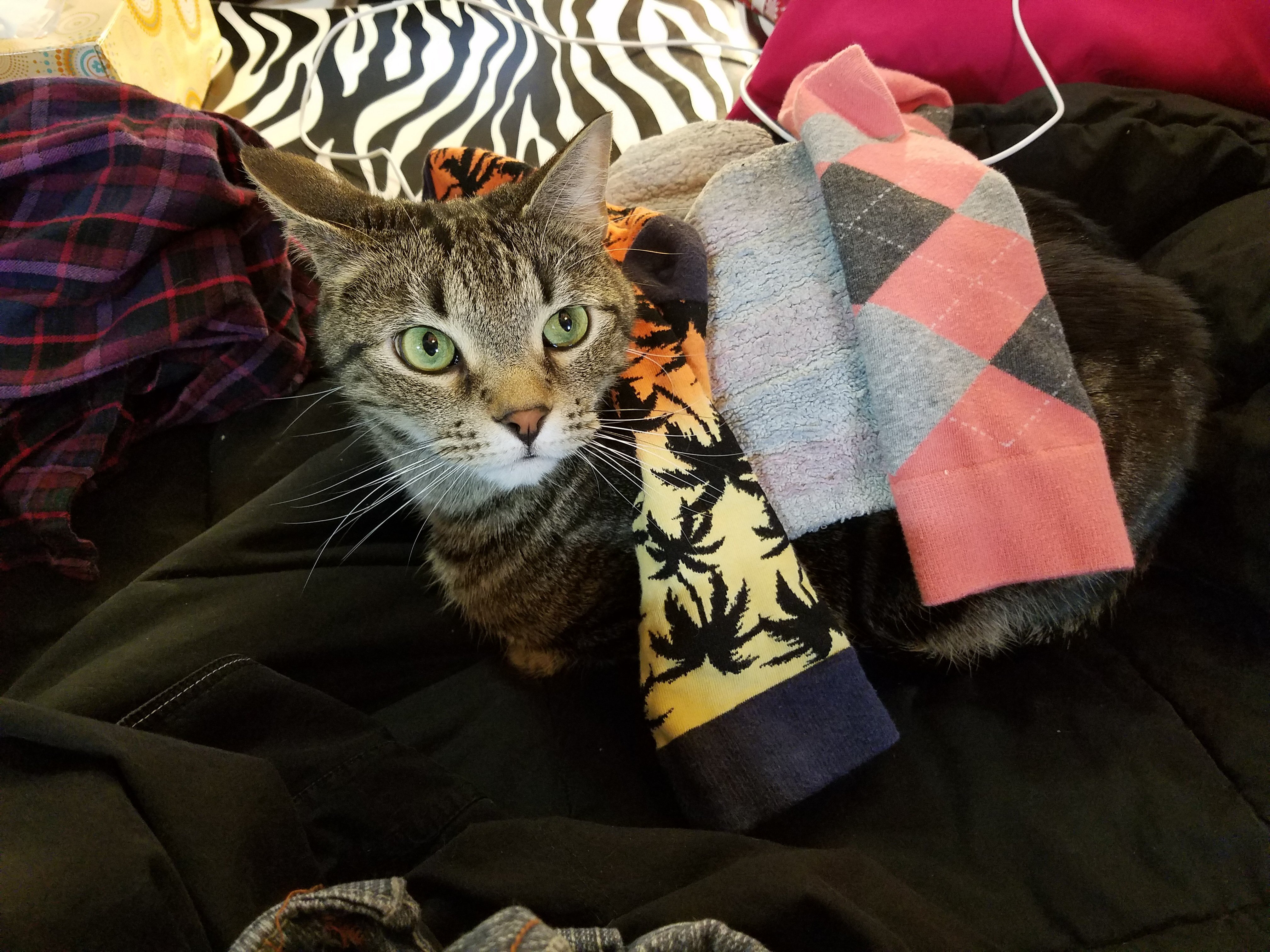 One time when I had done so, something riled him, and he suddenly dashed away — taking my socks with him. I chased him across the landing into brother’s room, where I removed the socks from where they still lay across his back and explained that he didn’t really get to keep them. And brother remarked from where he sat, “Robin has given Galileo a sock! Galileo is free!!”

So brother and I used to work at Edible Arrangements, right? Well, on Tuesday, he decided for no reason I ever found out to make his own arrangement at home. And you’d have to have worked at EA for a couple of years to really appreciate how nearly indistinguishable this is from an official EA arrangement: 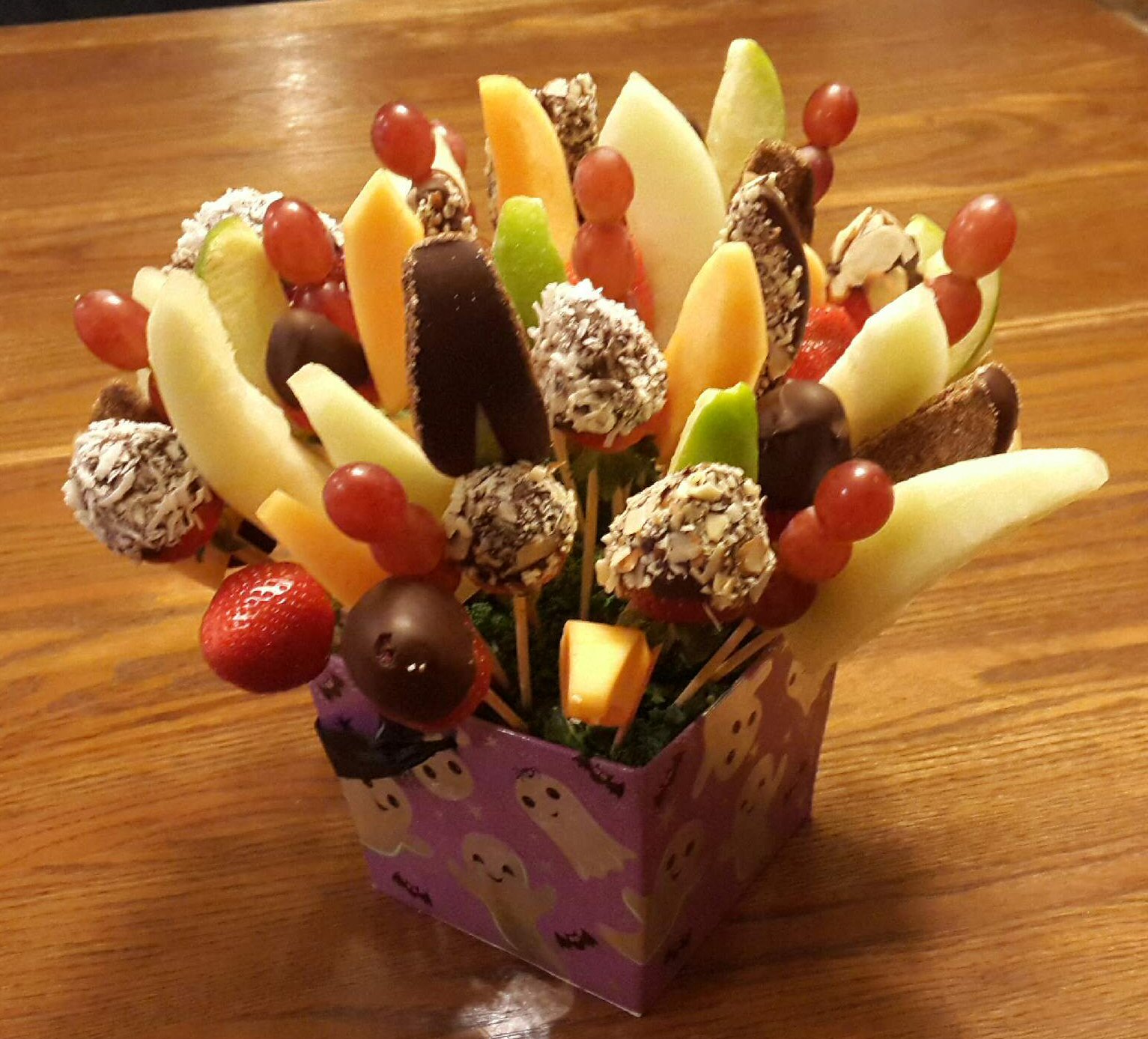 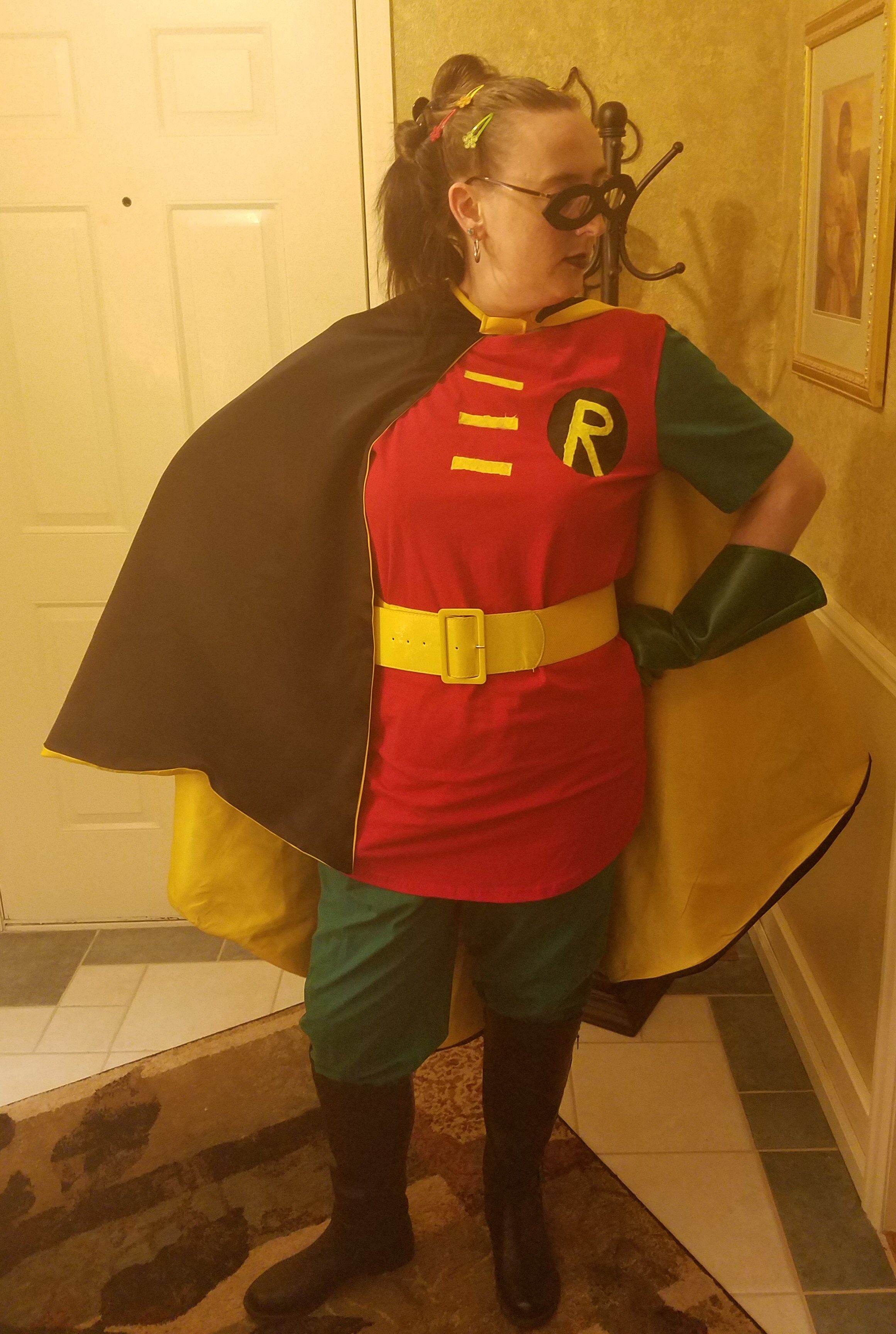 Ohhh, a red tee-shirt and a painted ‘R.’

Has anybody told you how wonderful you are?

Some bat-shaped gear, or maybe none at all.

Just… hangin’ around… in your front hall. 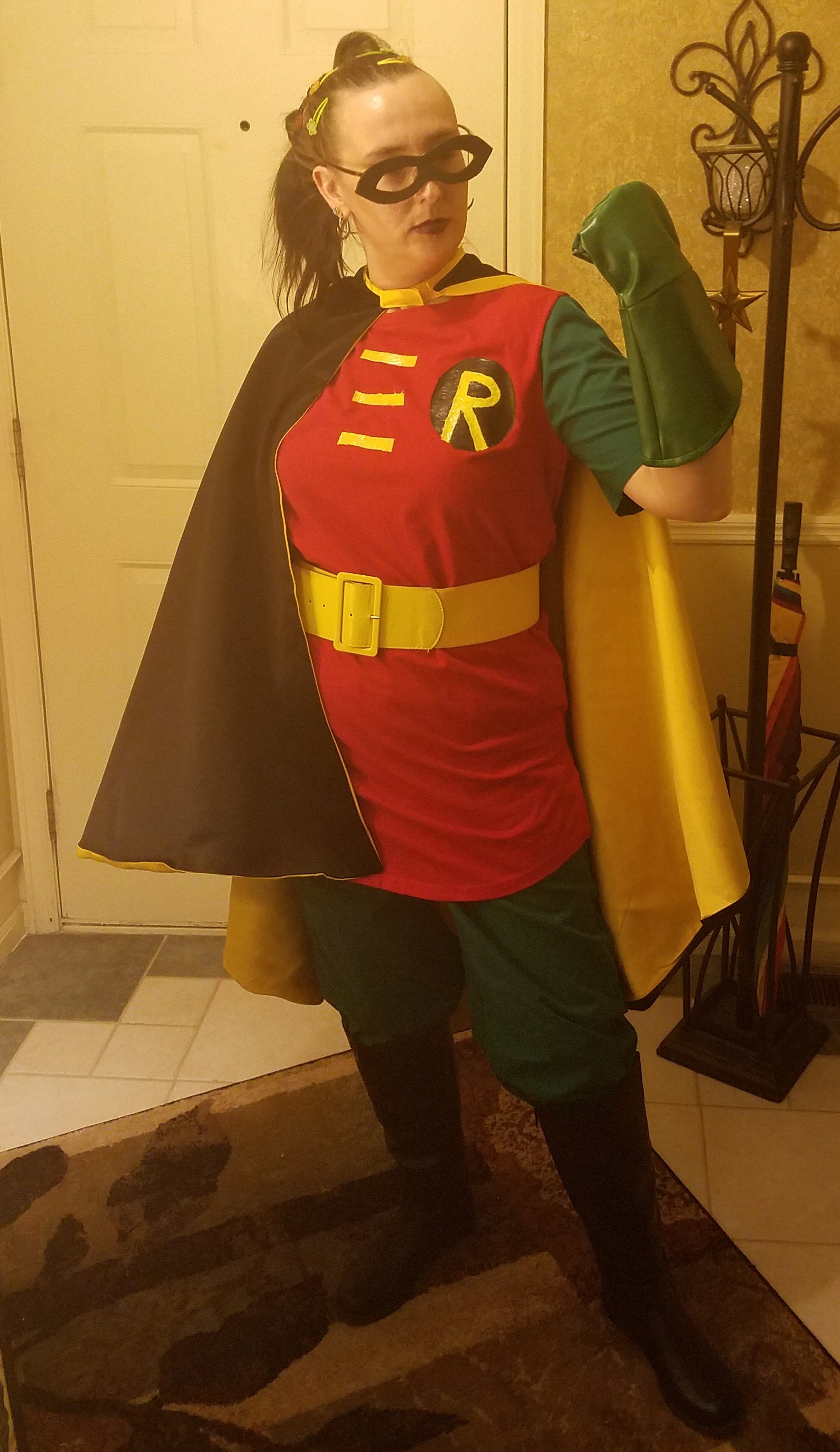 In BtAS, Robin doesn’t actually wear a leotard and tights — he wears a shirt over pants (leggings?) that have a red crotch section. Like hell was I going to come up with pants that had a red crotch section, though. It was already trouble enough to sew those green sleeves on. If I’d chosen a later Robin design I would have had less work, but it was BtAS Robin specifically I wanted to be. 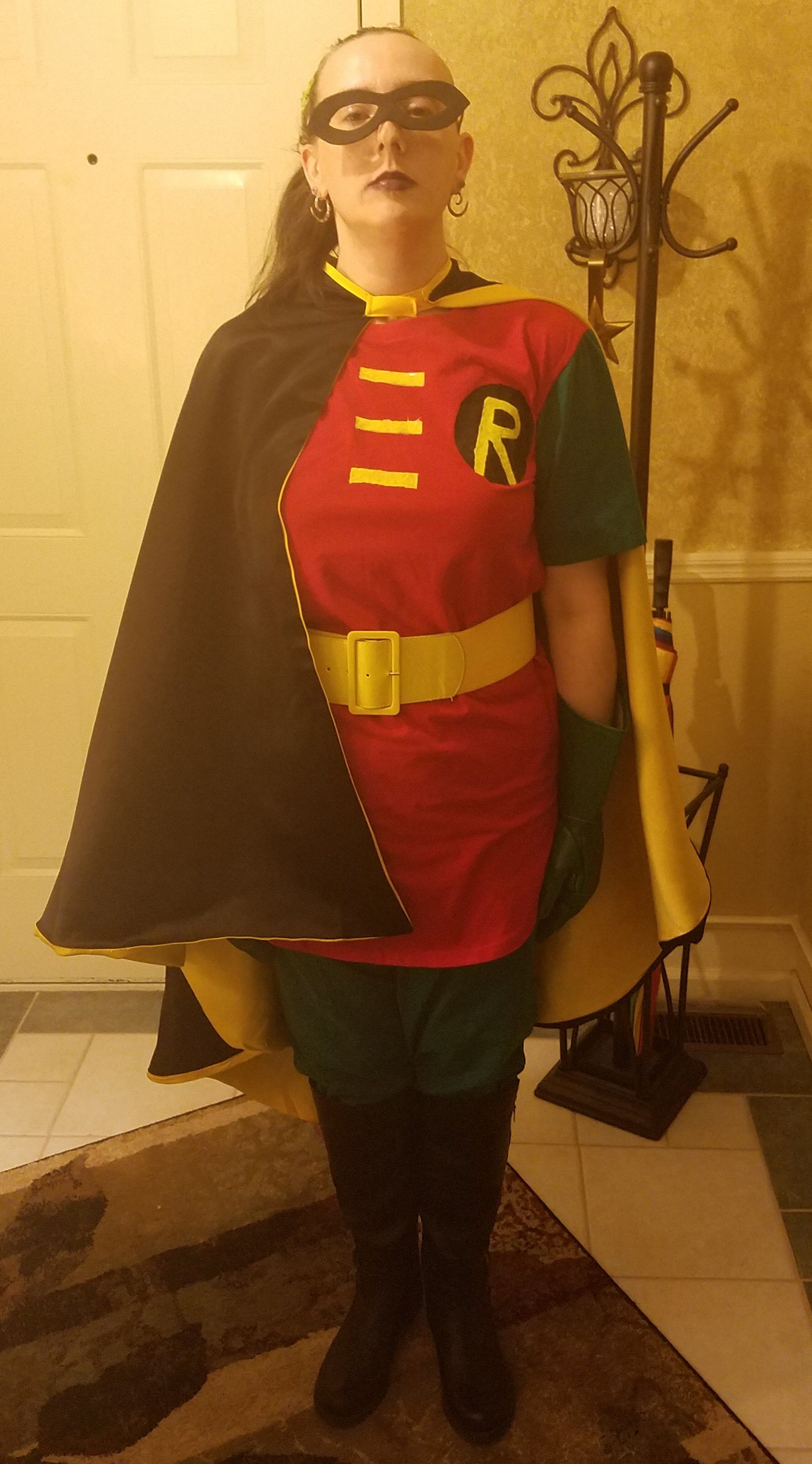 The gloves and the cape are both official, licensed Robin gear, but they weren’t the most expensive parts of this costume by a long shot. Those boots, man. At least they’re usable for more than this. 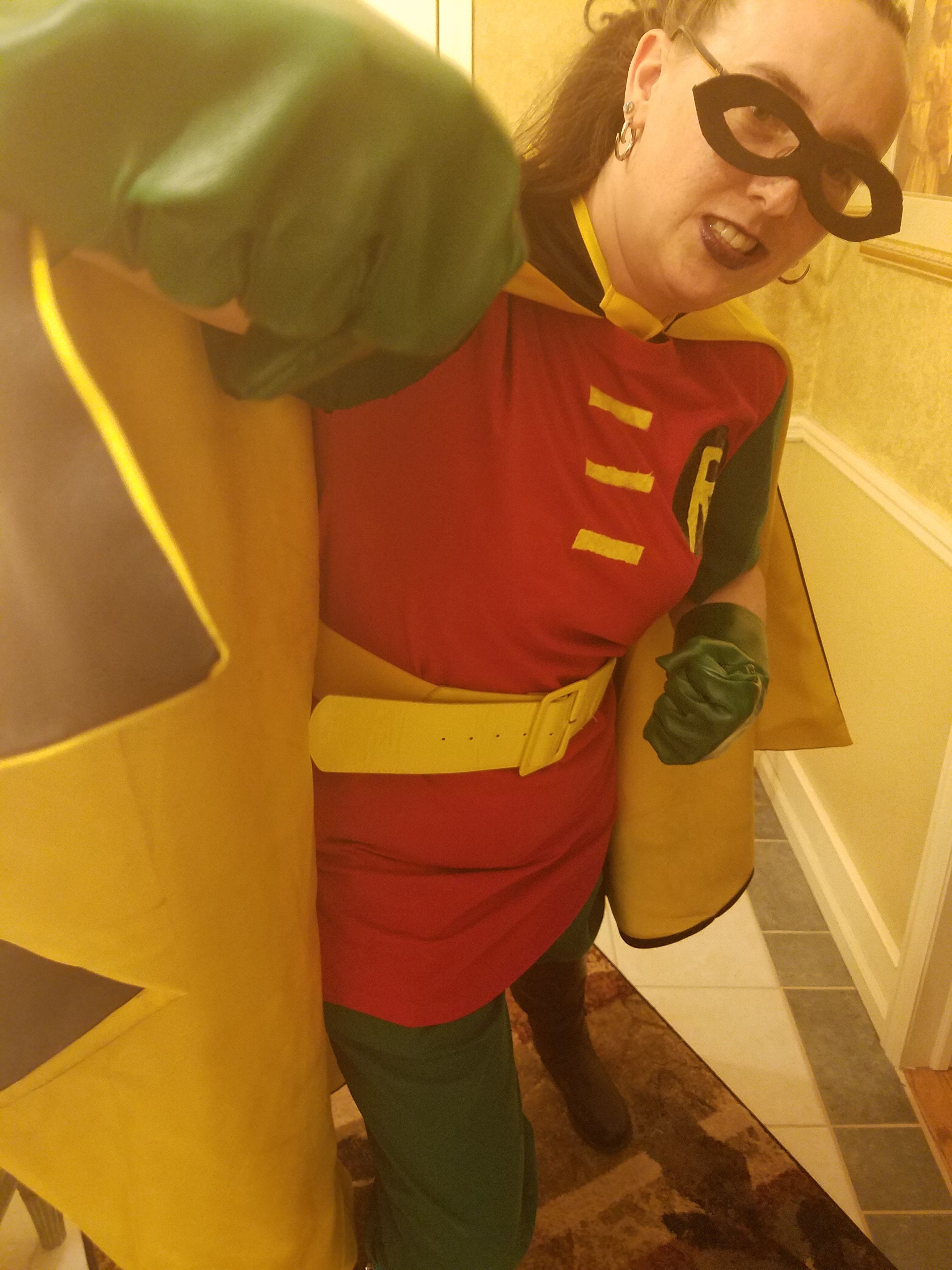 I like mah body, but I wouldn’t mind too terribly losing some weight from my putty chin/neck XD 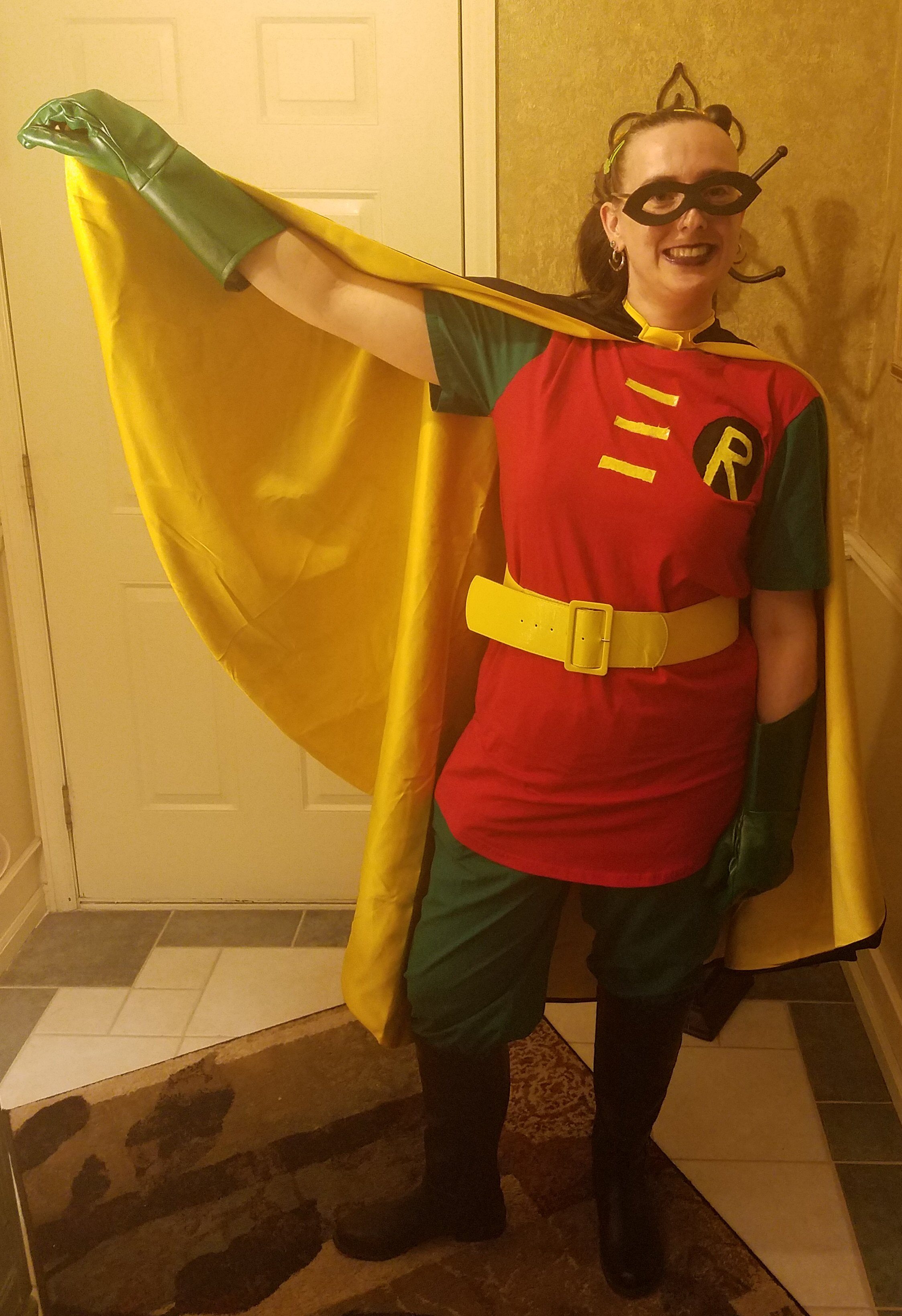 Yes, the mask looks kinda stupid. Obviously it would have looked better directly on my face — you know, the way you actually wear masks — but it was a choice between that and being able to see.

At any rate, I was quite happy with this costume. 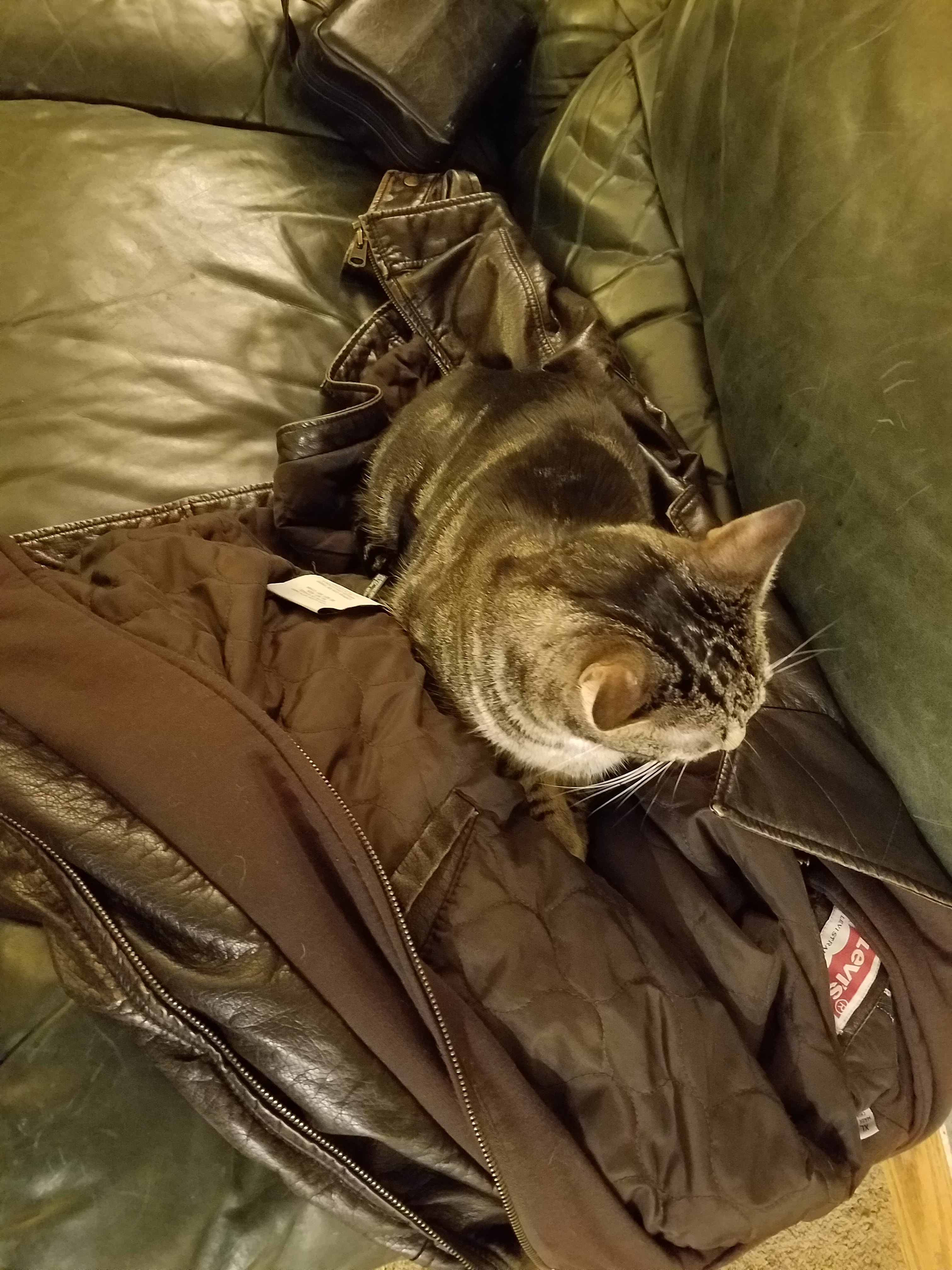 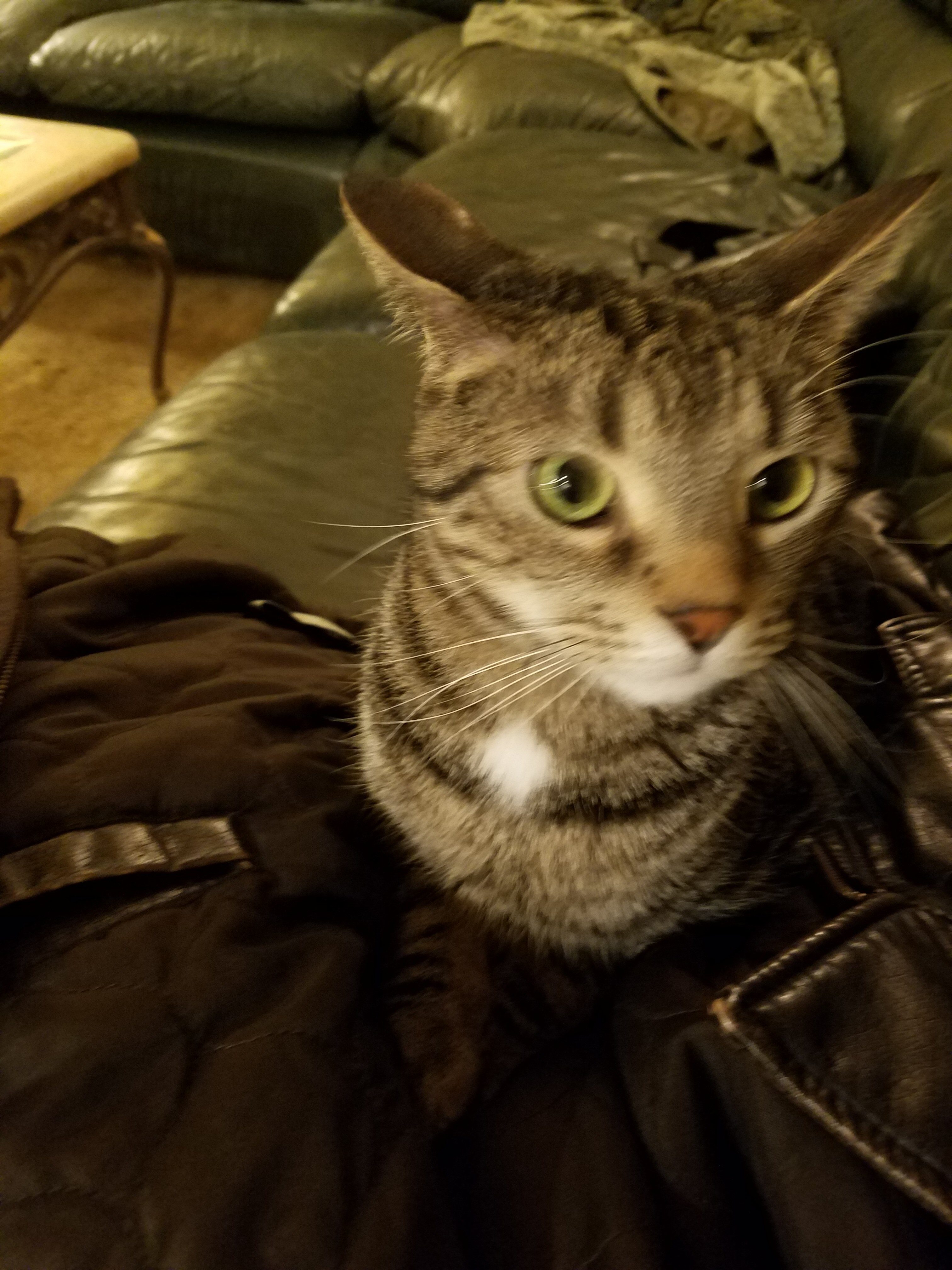 A cat named Mango at work: 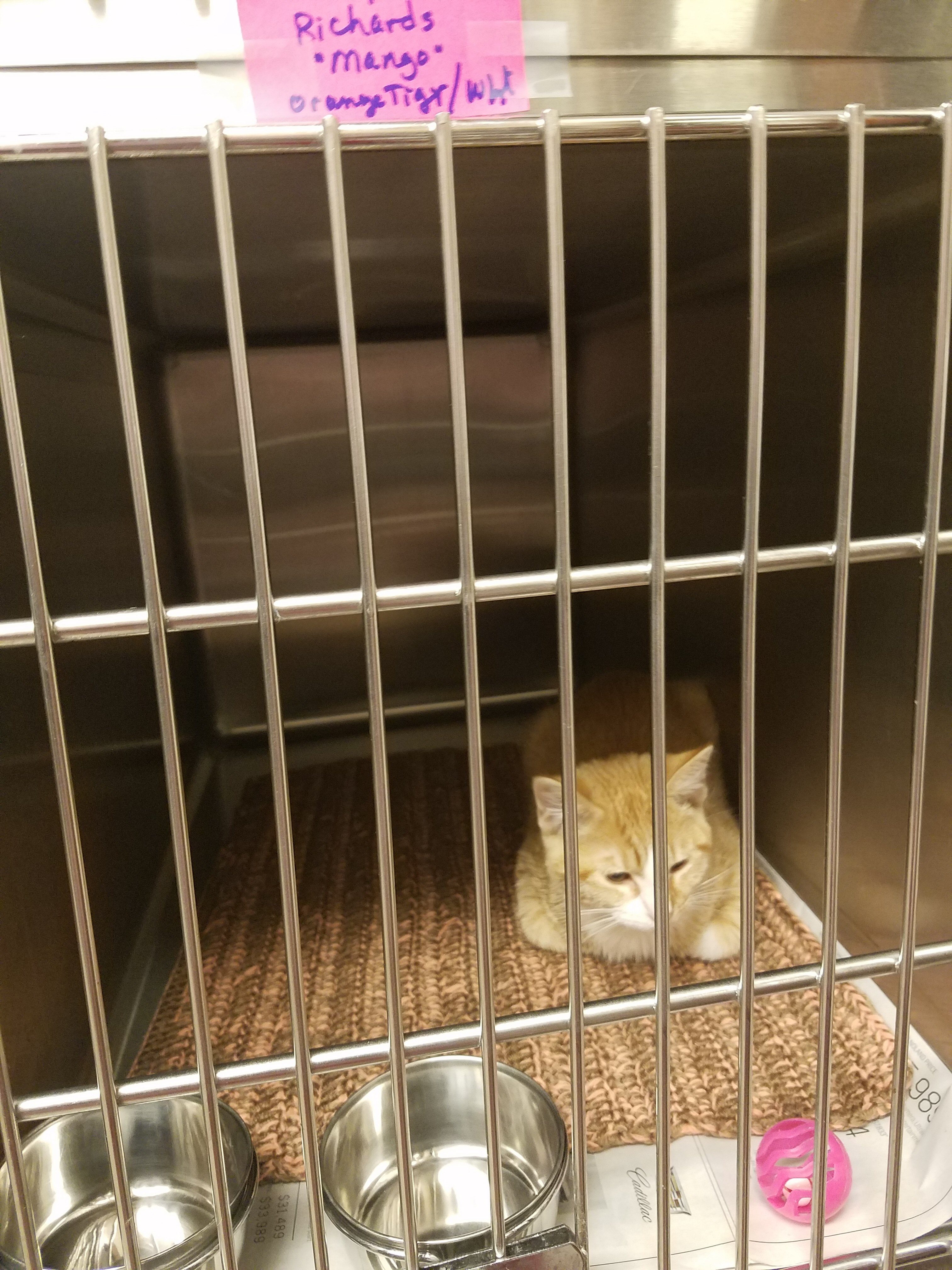 Brother made a jack-o-lantern but didn’t like it, so he left it on the back porch. One of the squirrels helped himself. 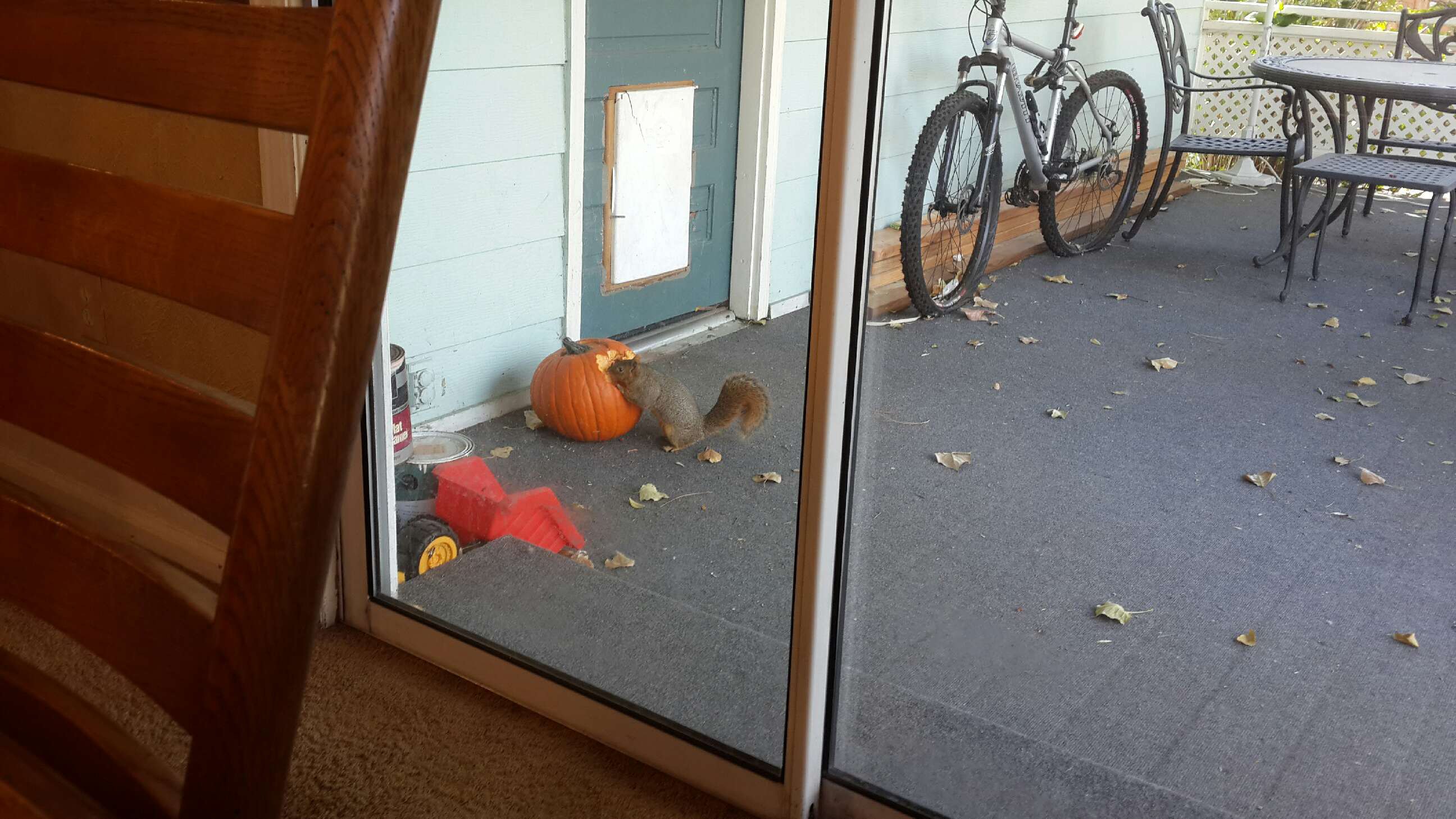 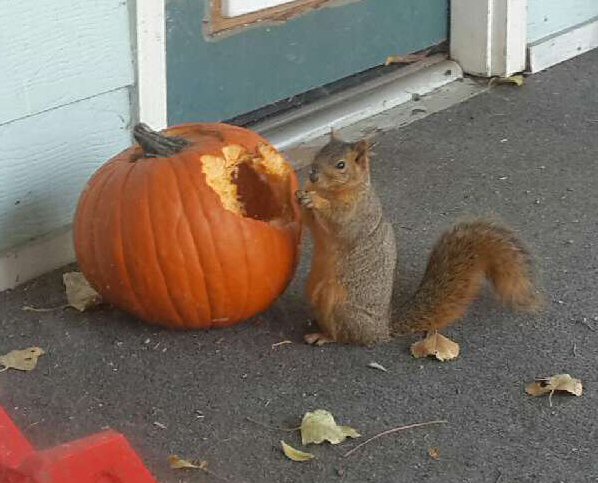