TWIP: Galileo is so photogenic and also I got a new desk

Sometime early last year I decided I wanted this corner desk from IKEA, but I was in the middle of medical stuff and then Beeks had his expensive surgery, and then I went on vacation, so the new desk, though not terribly expensive, got put off and put off and put off. Well, guess what. 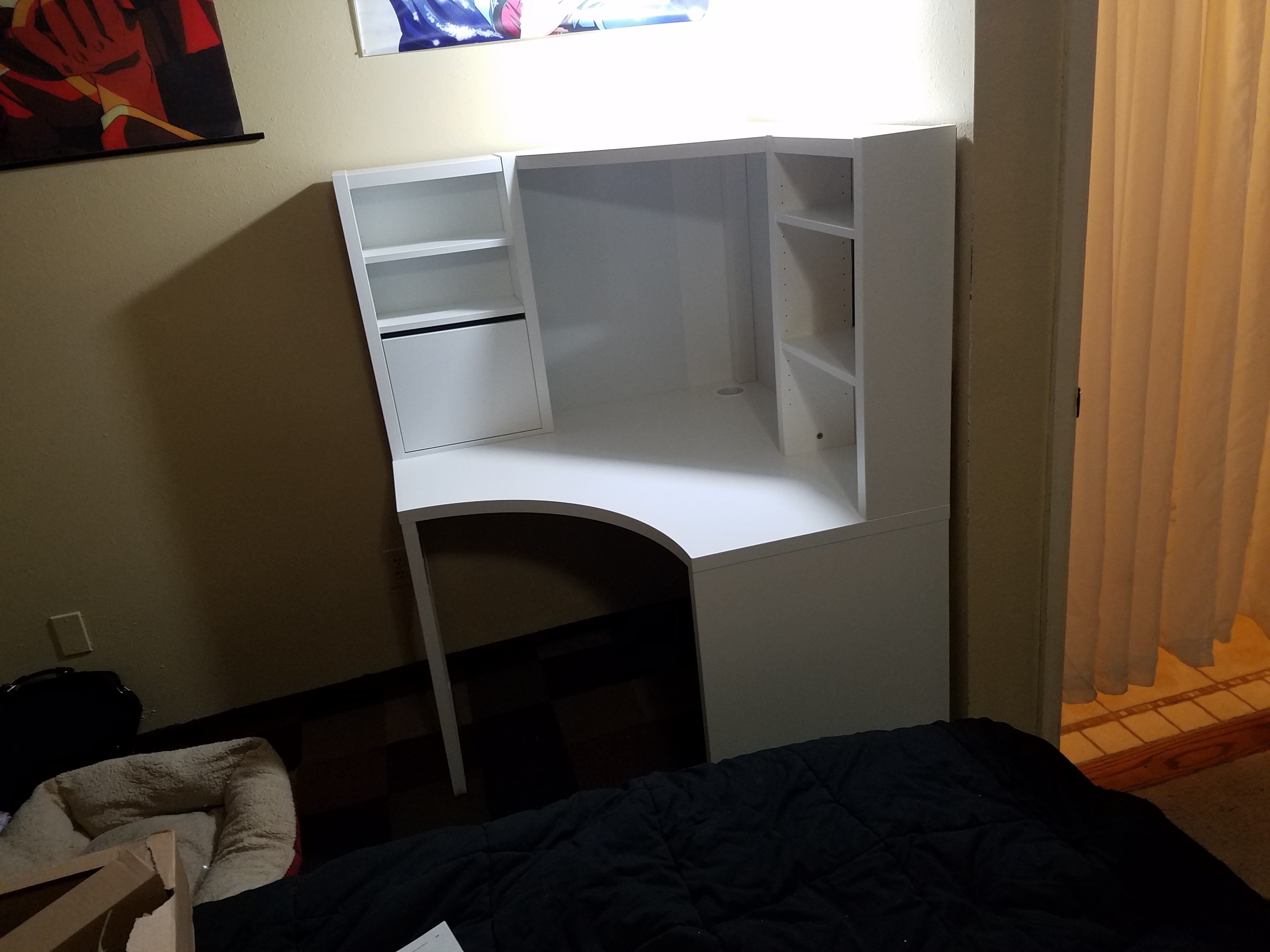 The larger of the two boxes the parts came in was, like, 1.5 inches too big to get into my car. So there I was in the IKEA parking lot pulling piece after piece out of the box and putting them all separately into the car, then eventually folding the mostly empty box in half in order to stuff it in after. I wonder (in all seriousness) how often this happens.

It took four hours to put together. FOUR HOURS. Without breaks. The instructions were perfectly clear and the process wasn’t difficult in any way, only extremely time-consuming. I think that didn’t help with the cold I was incubating just then XD Anyway, I love the desk so far. Now to get the draft table I want to go next to it so I can swivel back and forth between computer and drawing!

(Actually the next step is to get the table my computer formerly lived on cleared off so I can get rid of it. I am not quick at this type of project.) 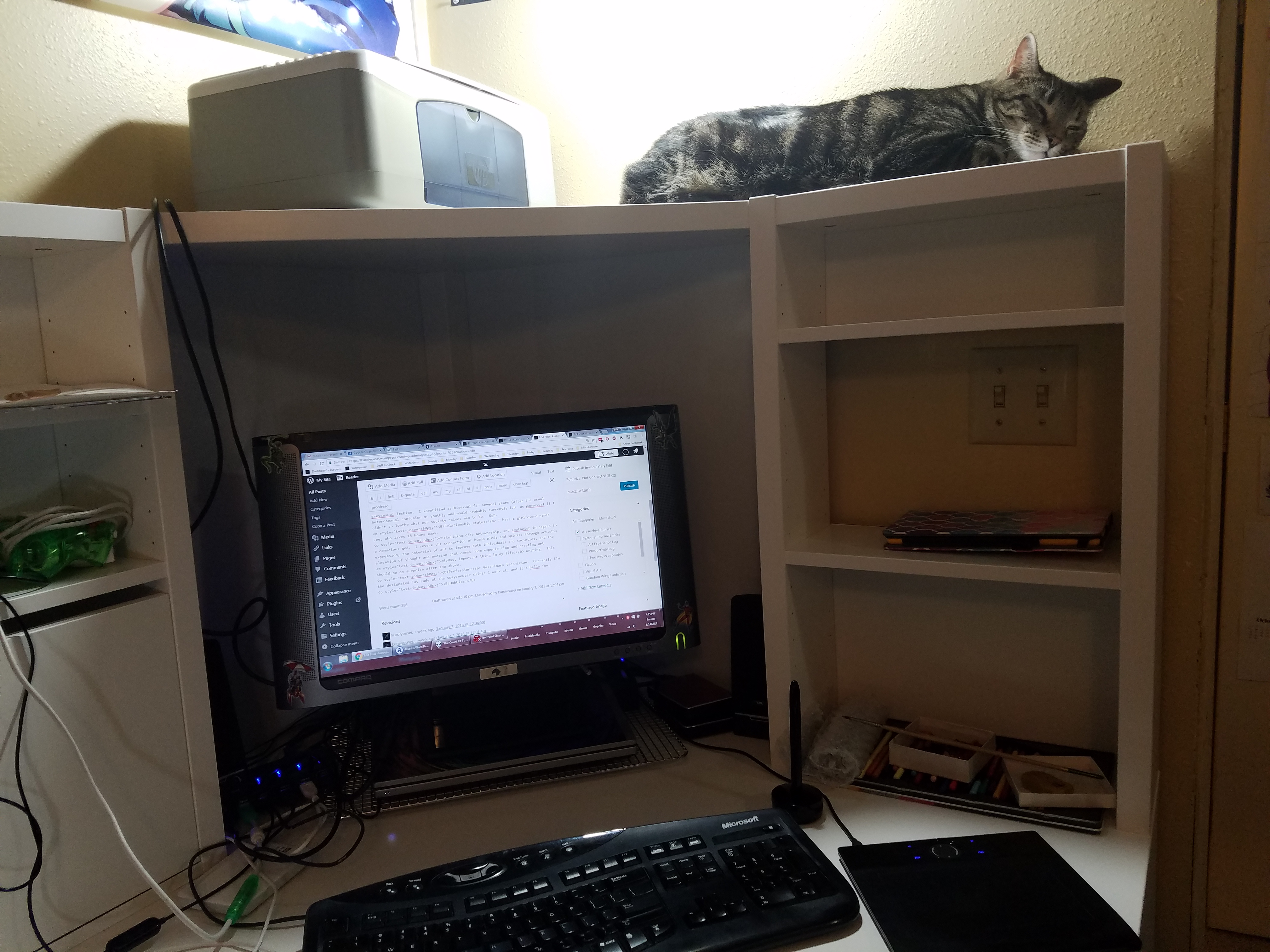 My scanner (which once upon a time was also a printer) is up there, but I’m trying to avoid putting anything else up top so there will always be free space for the cats. 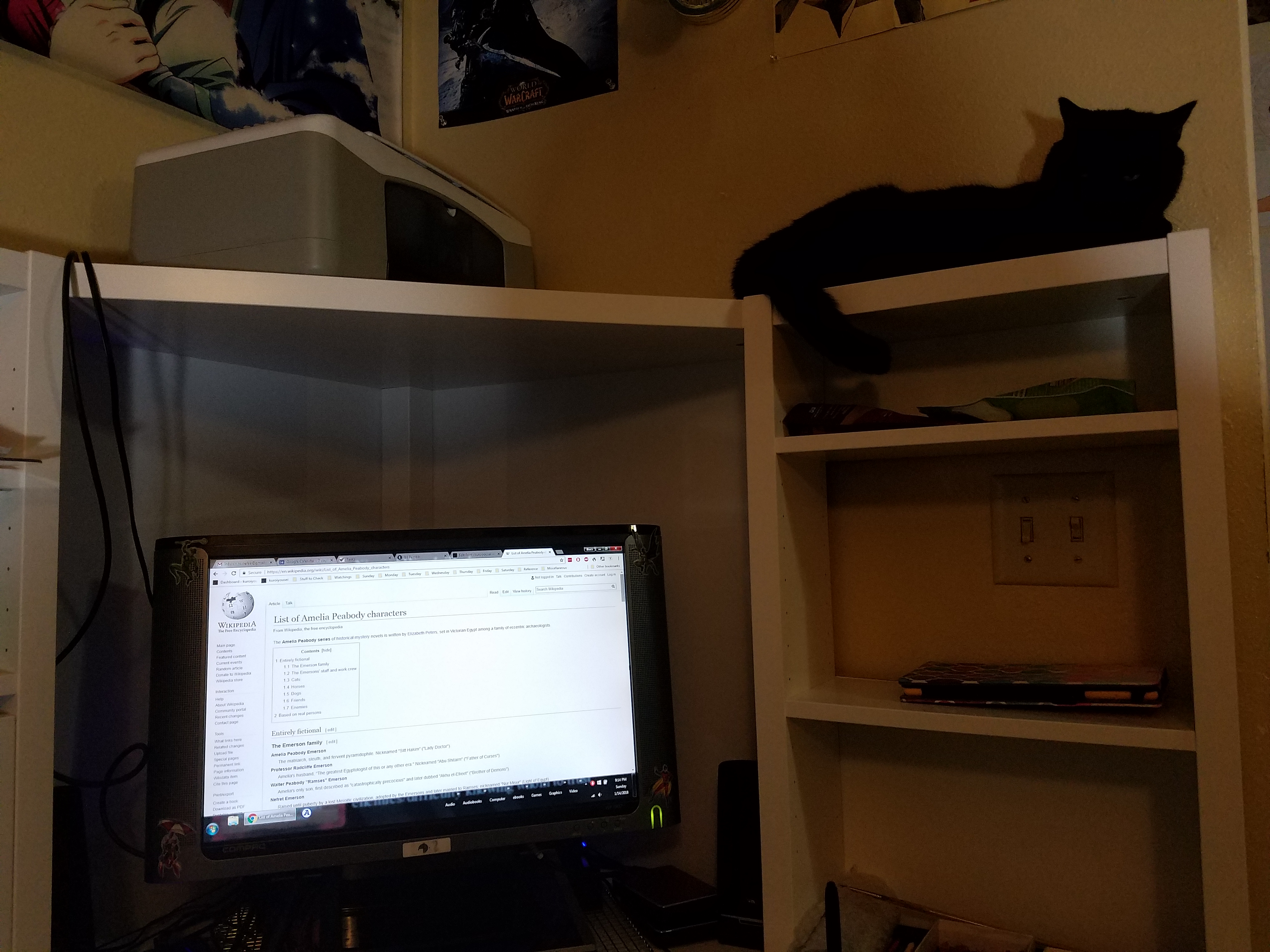 Waybee’s been up there far less than Stipety, because she’s a creaky old lady.

I checked in a sphinx the other day, and his mom brought him in a little bag, which she requested to leave in the cage with him for the day. 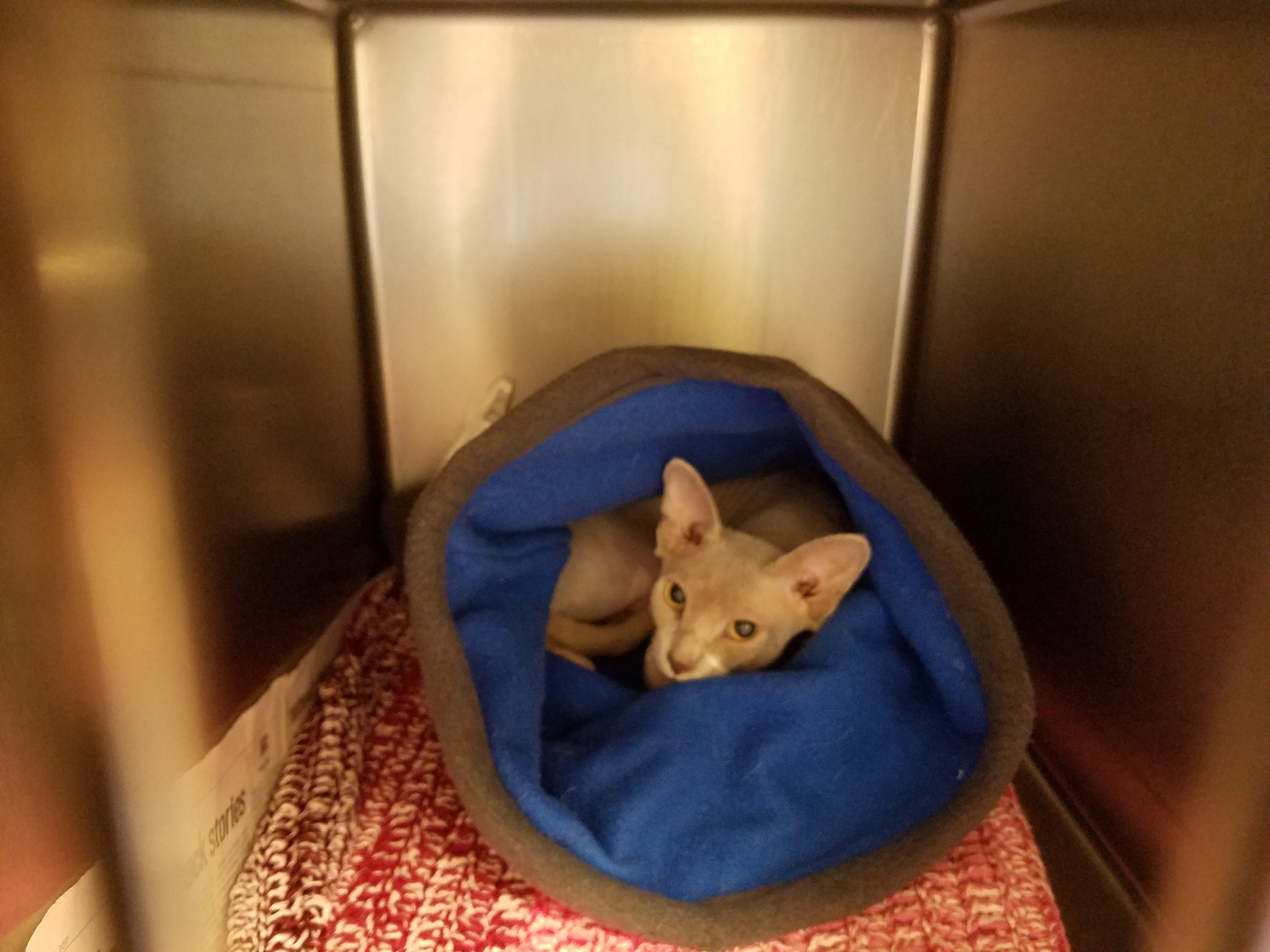 Obviously he is well accustomed to, and prefers, being inside his little bag. It was so damn cute. 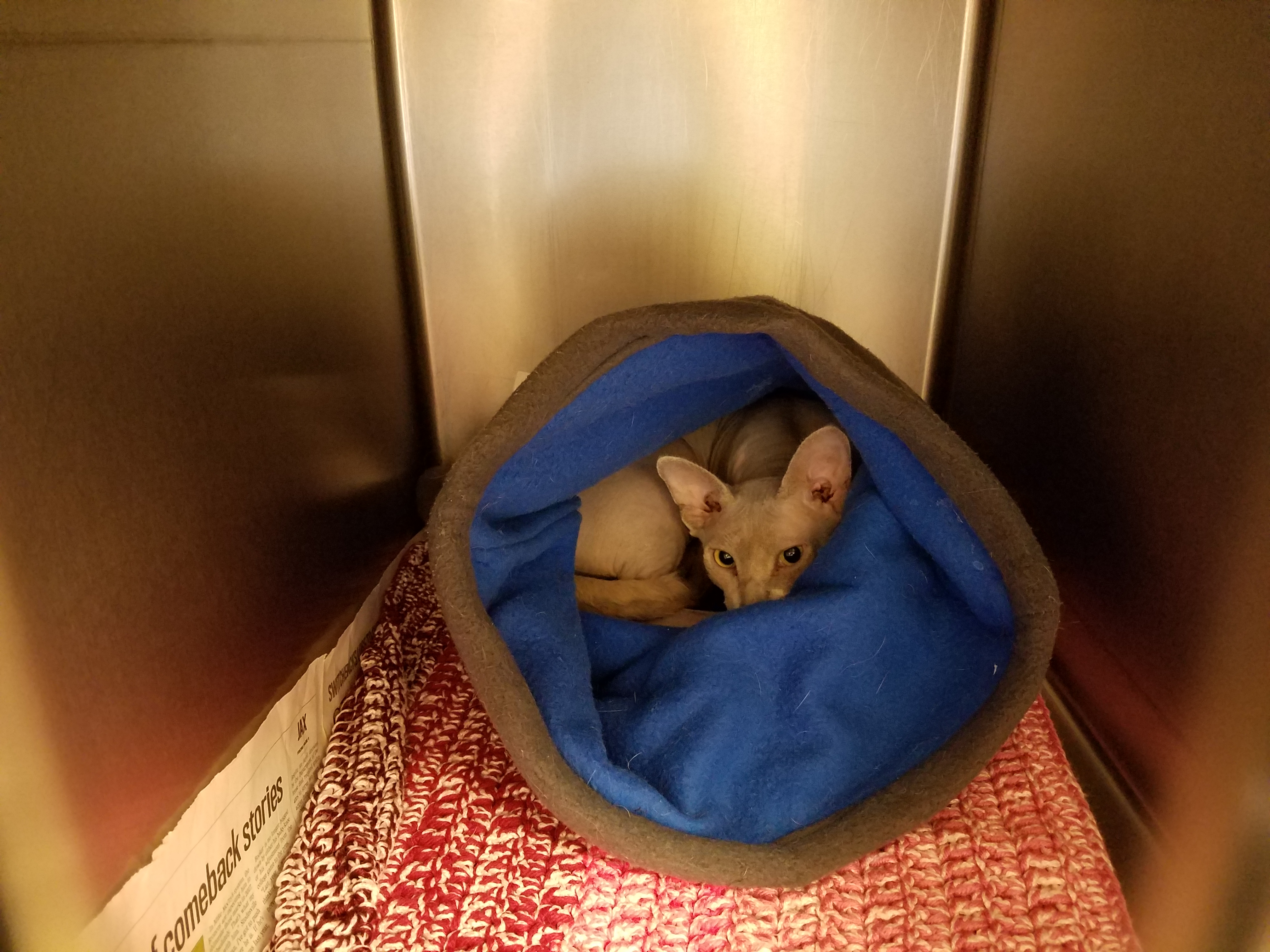 As some may know, I’m always cold. Always. Because of this, I wear a long-sleeved shirt under my scrub top to work every day, and almost always wear a lab coat over that. I bought a couple of new long-sleeved shirts, and wanted to show the color of one of them to somebody via text message, so here’s a picture of my arm: 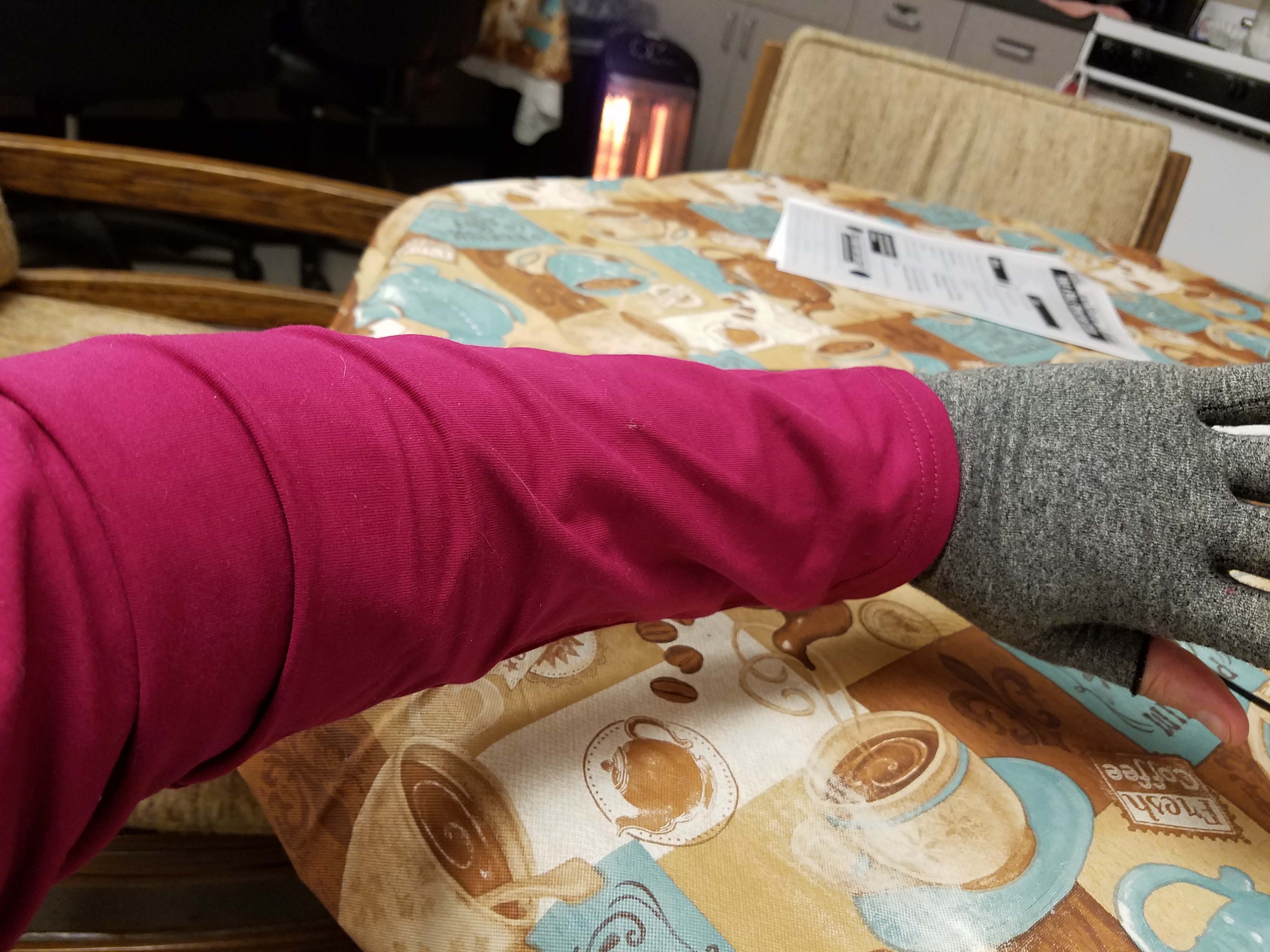 I don’t think I’ve mentioned that I got a raise at the beginning of the year. It’s already pretty amazing. And being able to buy long-sleeved shirts more easily made me think…

There are some things, such as long-sleeved shirts to wear under scrub tops because I’m always cold, that fall somewhere hazy in between “necessity” and “luxury.” But because I technically can get by without them, in my head they get pushed toward the “luxury” end of the spectrum. I want more, but my self-control says, There are more important things to spend money on, and pushes it way down the priority list.

So now that I’ve gotten a pretty significant raise and have a greater amount of spare money and it’s perfectly acceptable (more acceptable even than before) to buy myself long-sleeved shirts, I have to continually remind myself that this isn’t a luxury item or a waste of money. Of course there are still more important things to spend money on, but I can afford more of everything now, and I shouldn’t feel guilty about this. It’s… a challenge XD

Meanwhile, have some more Galileo on top of my new desk: 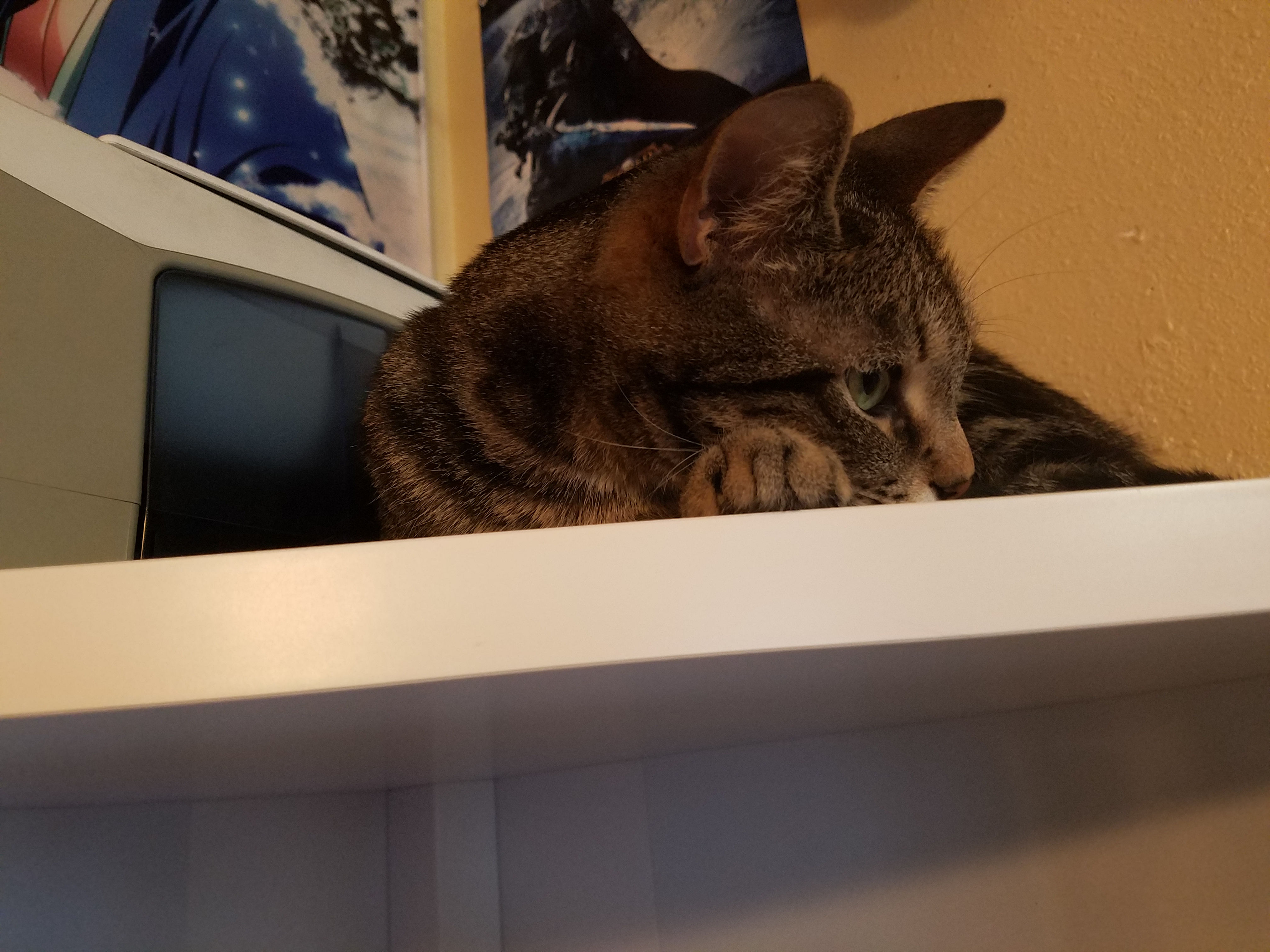 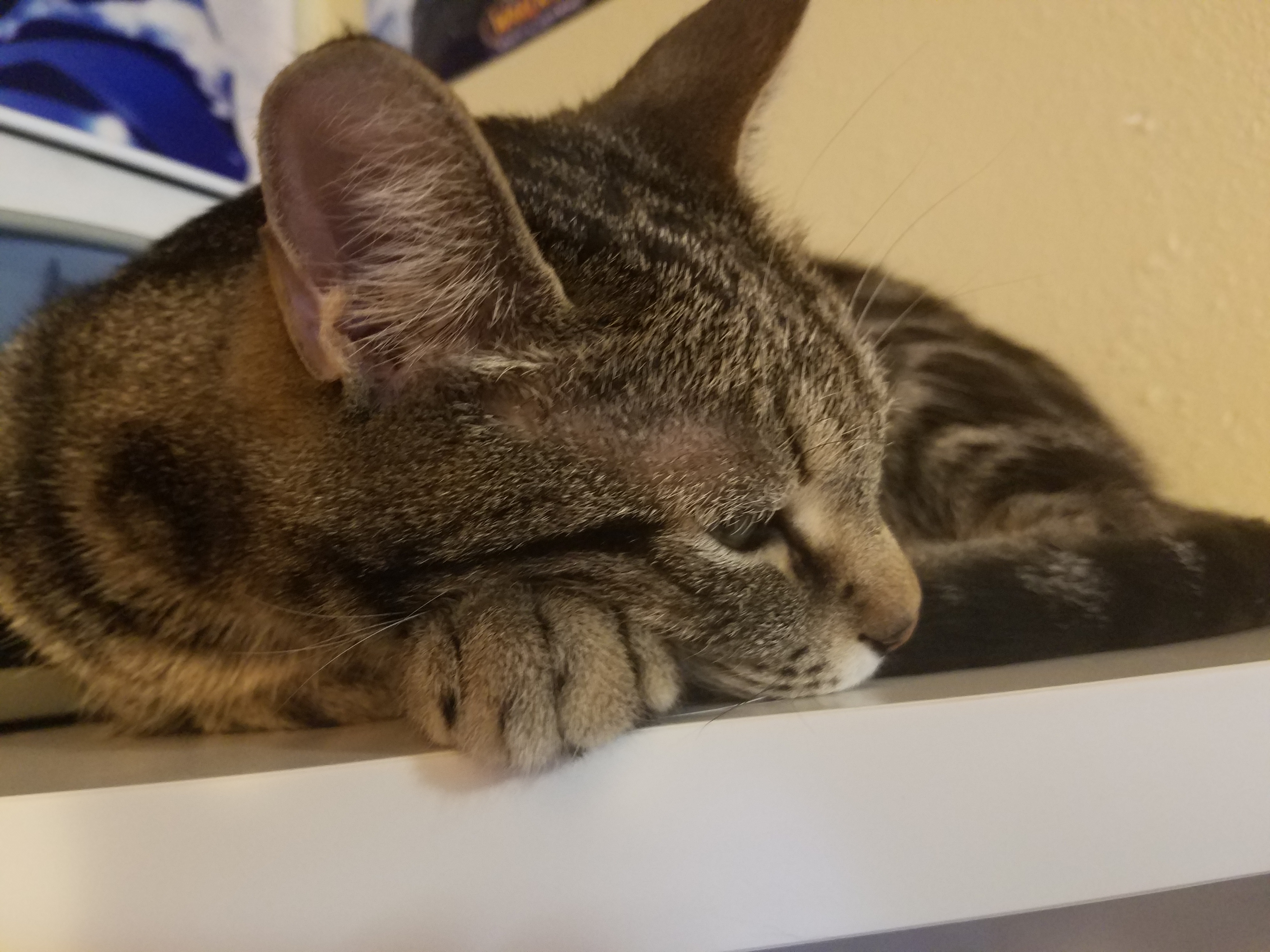 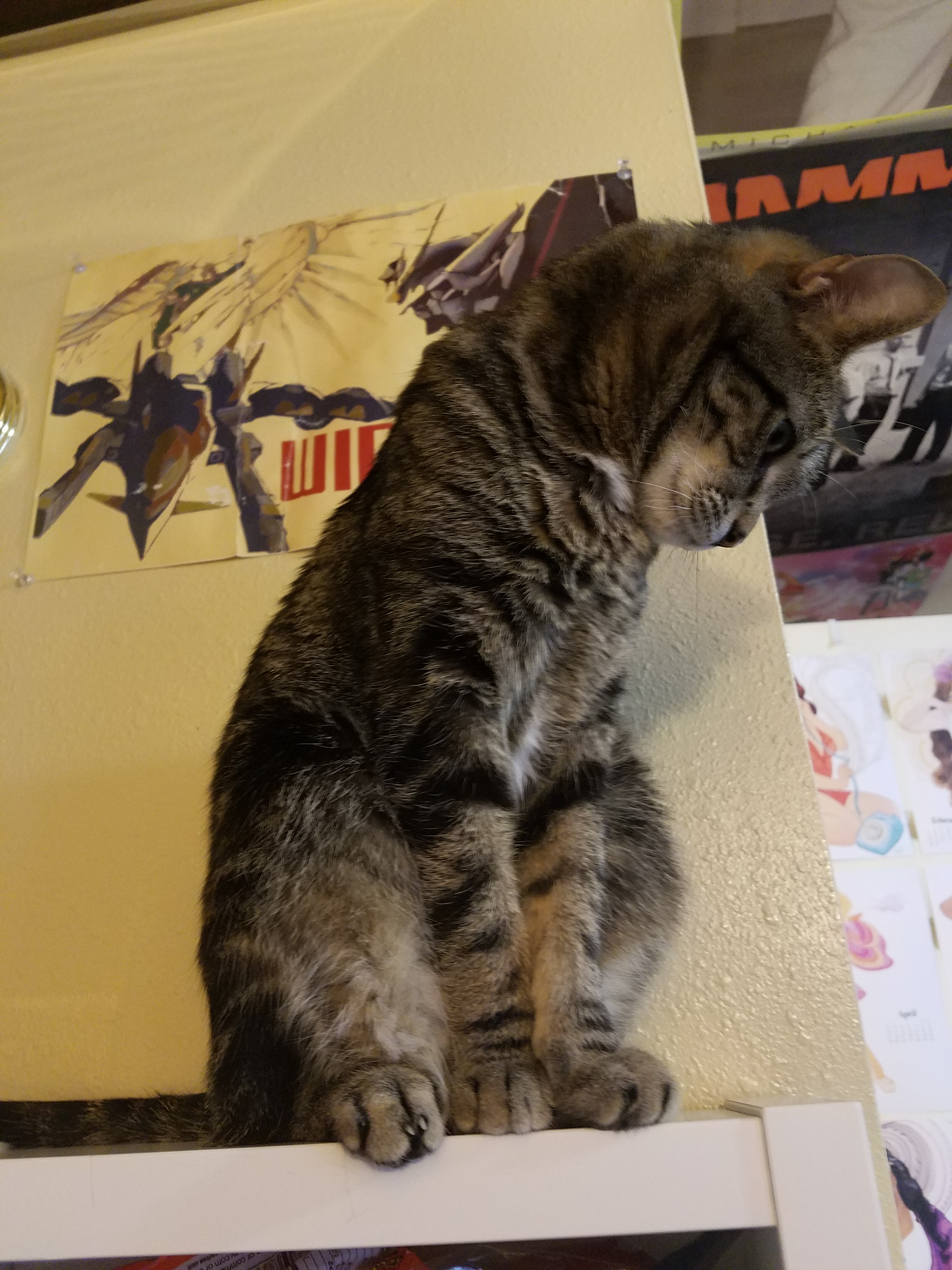 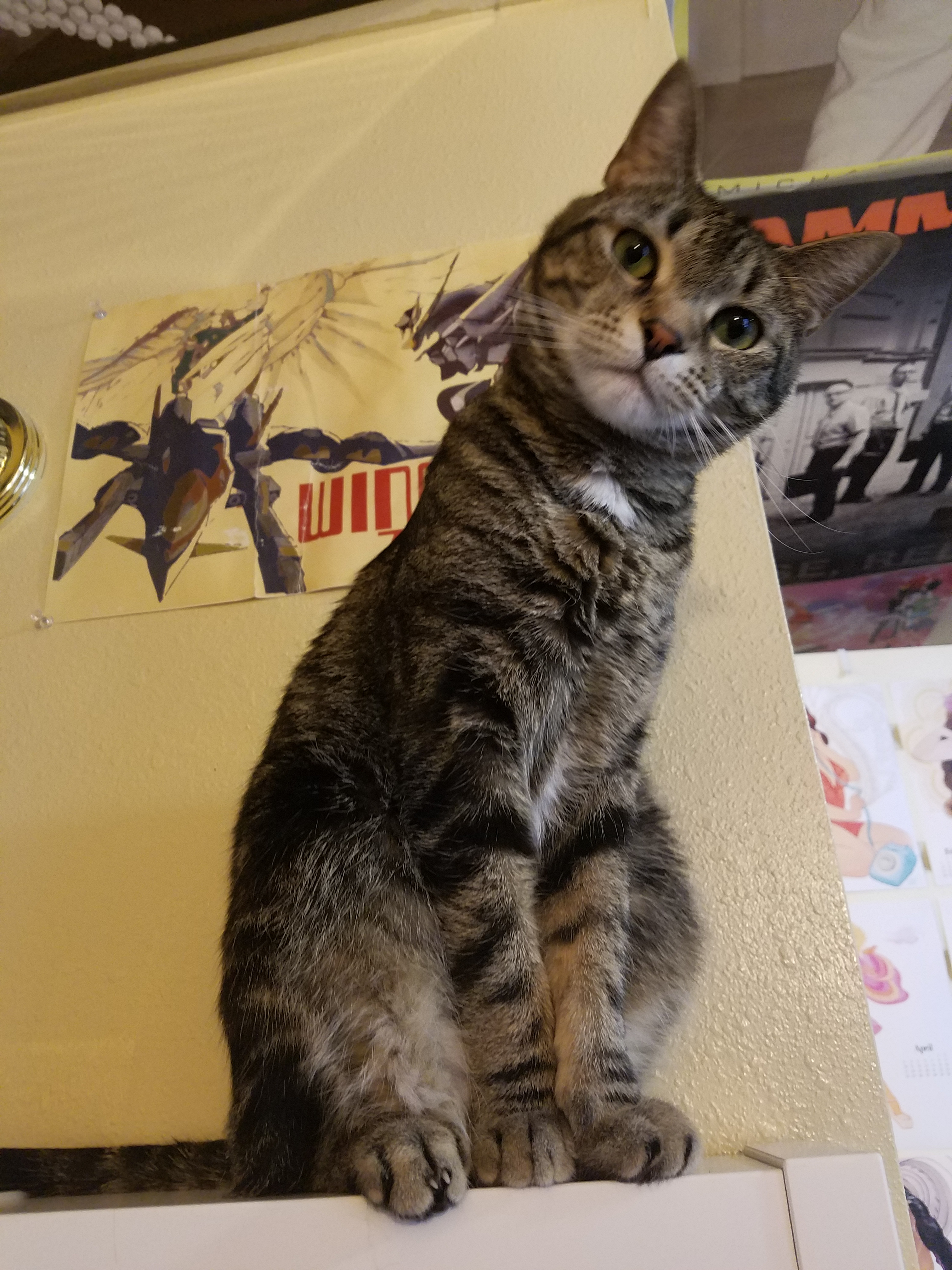 Finally, after a billion years of its being finished, I’ve managed to pack up Merpoleon for shipping. Of course I haven’t actually mailed the thing yet, but it is addressed and sitting next to me here on the new desk, and I’ll send it by the end of this weekend (probably on Monday, since I’m not likely to go anywhere today until after the post offices are closed).

I was never satisfied with the pictures I got of it, however, and also I kinda want to start giving an idea of the size of some of these things, so I had dad take some shots of me holding it before I packed it up. 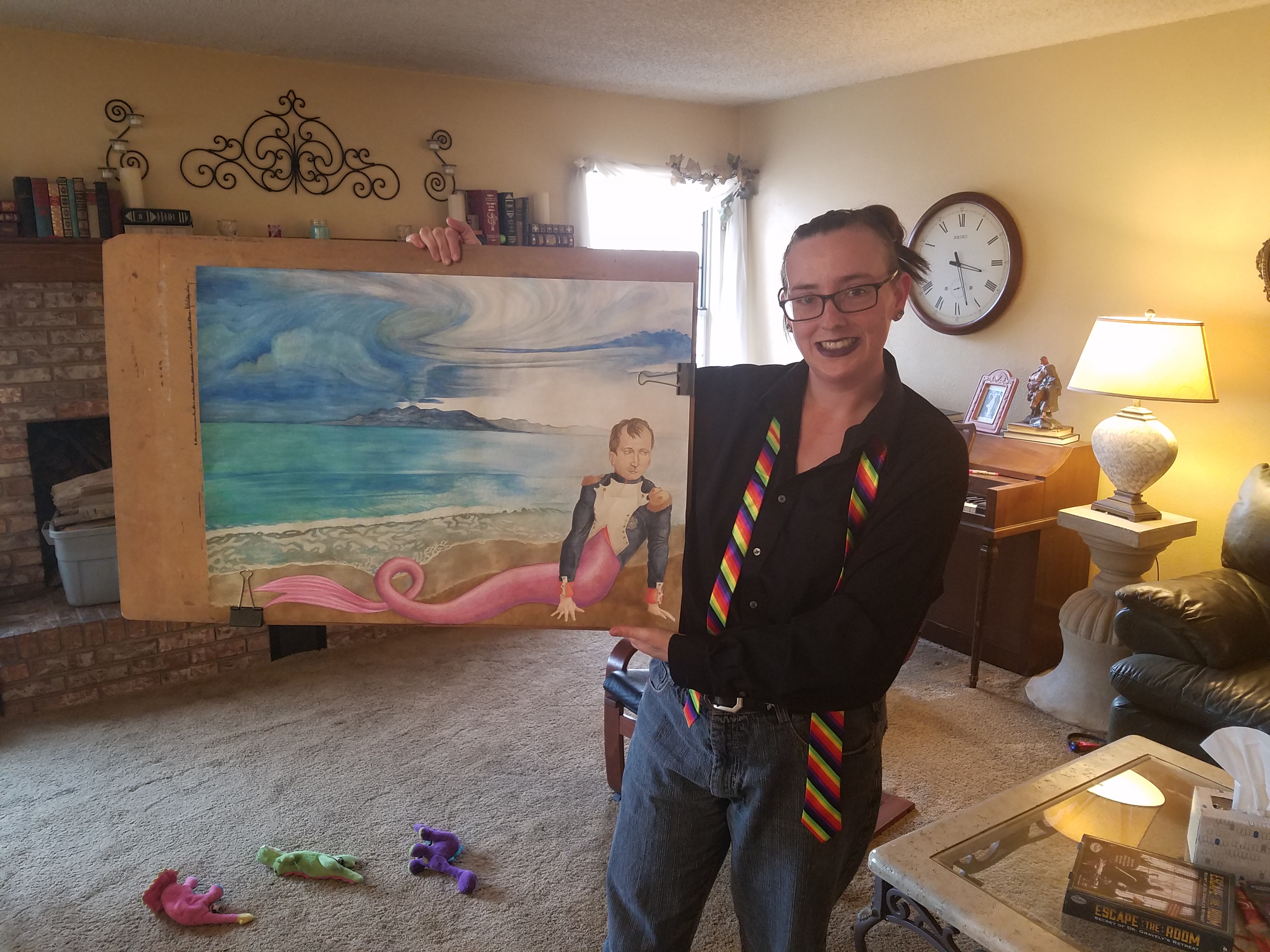 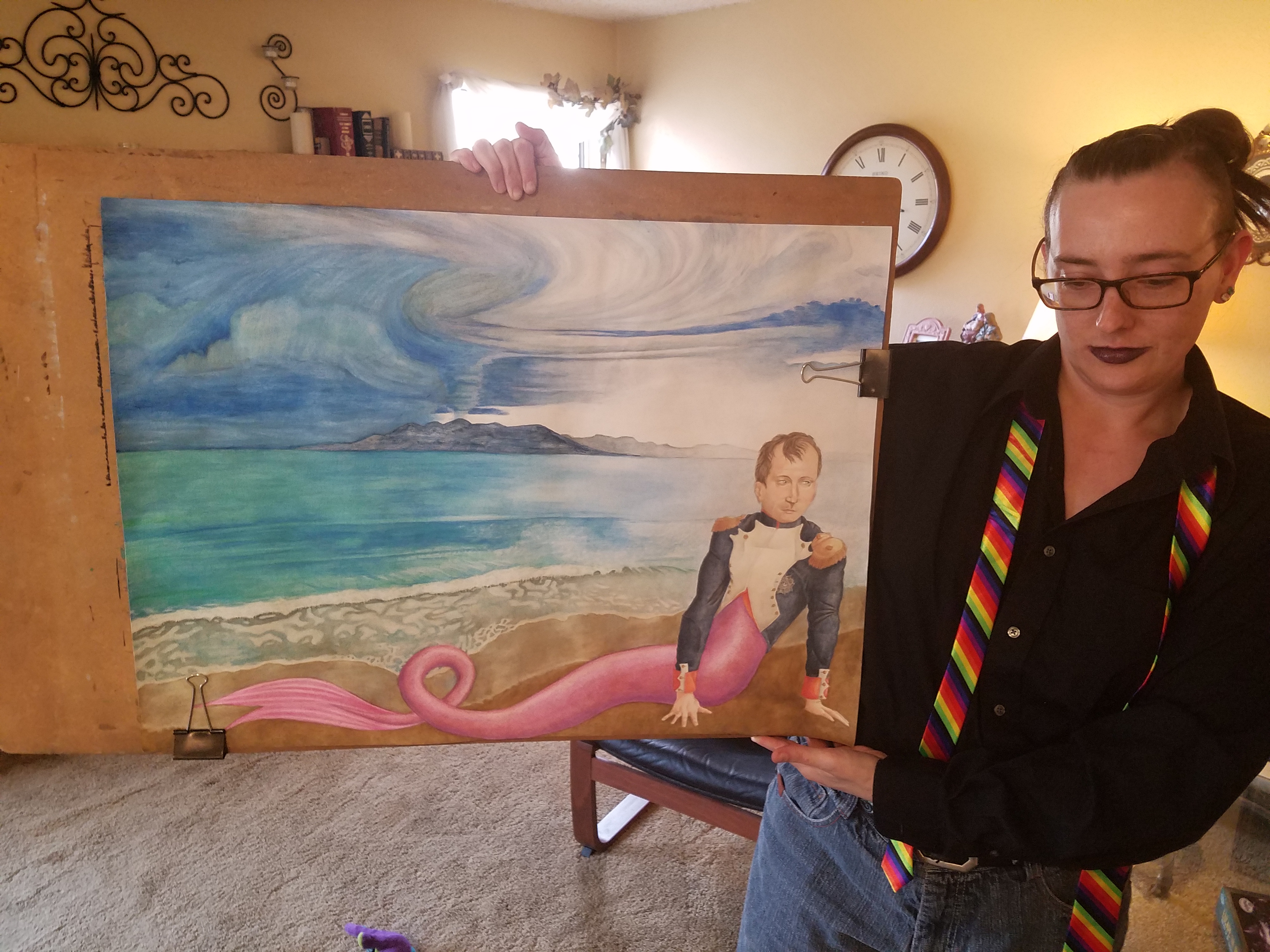 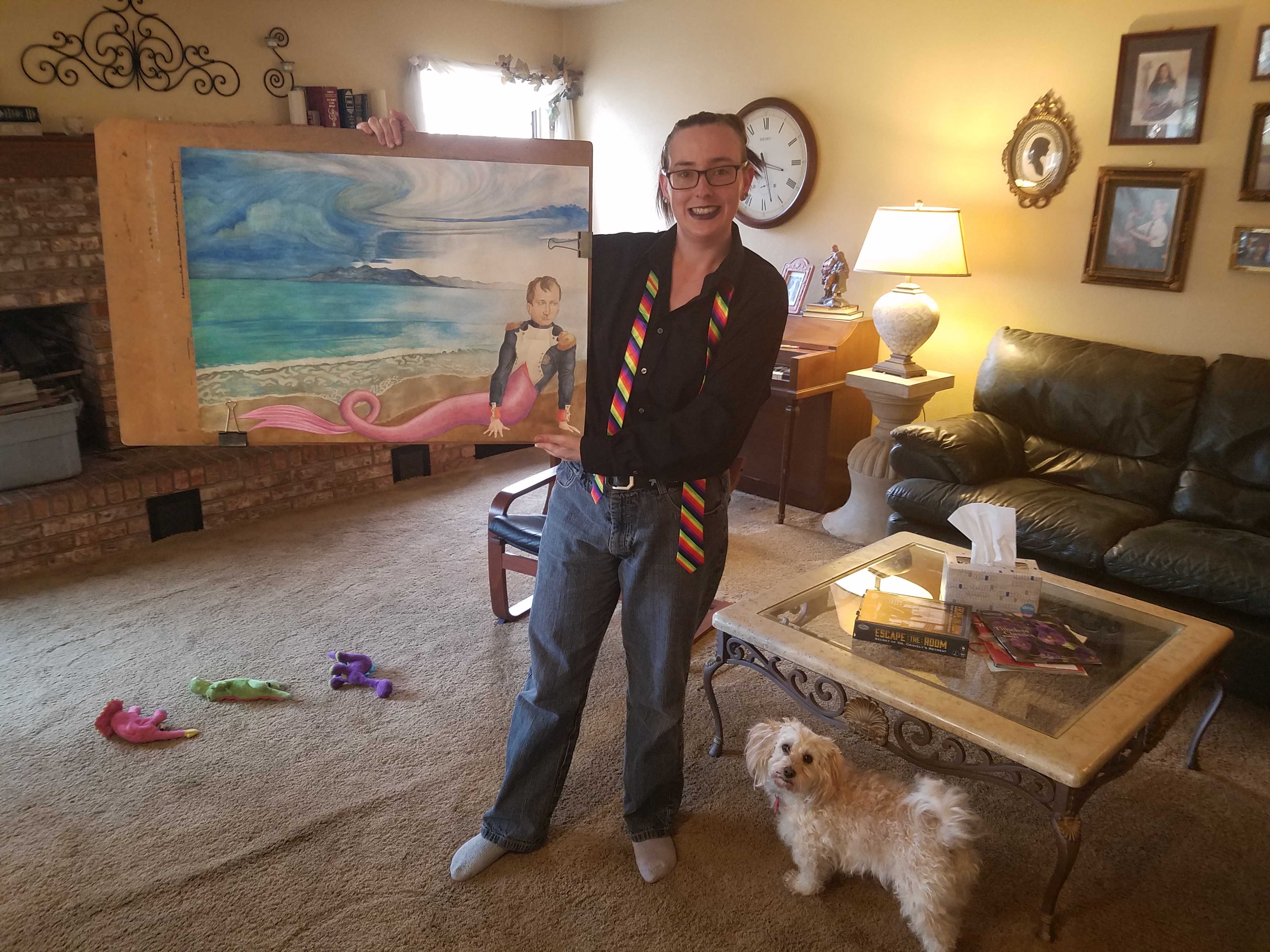 I love how Hiko looks vaguely confused in that last image. Also you can see all three of his dinosaurs in a row down there, heh.

We had some pretty snow the other day, and I wanted to document it, even though it looked just like it always does: 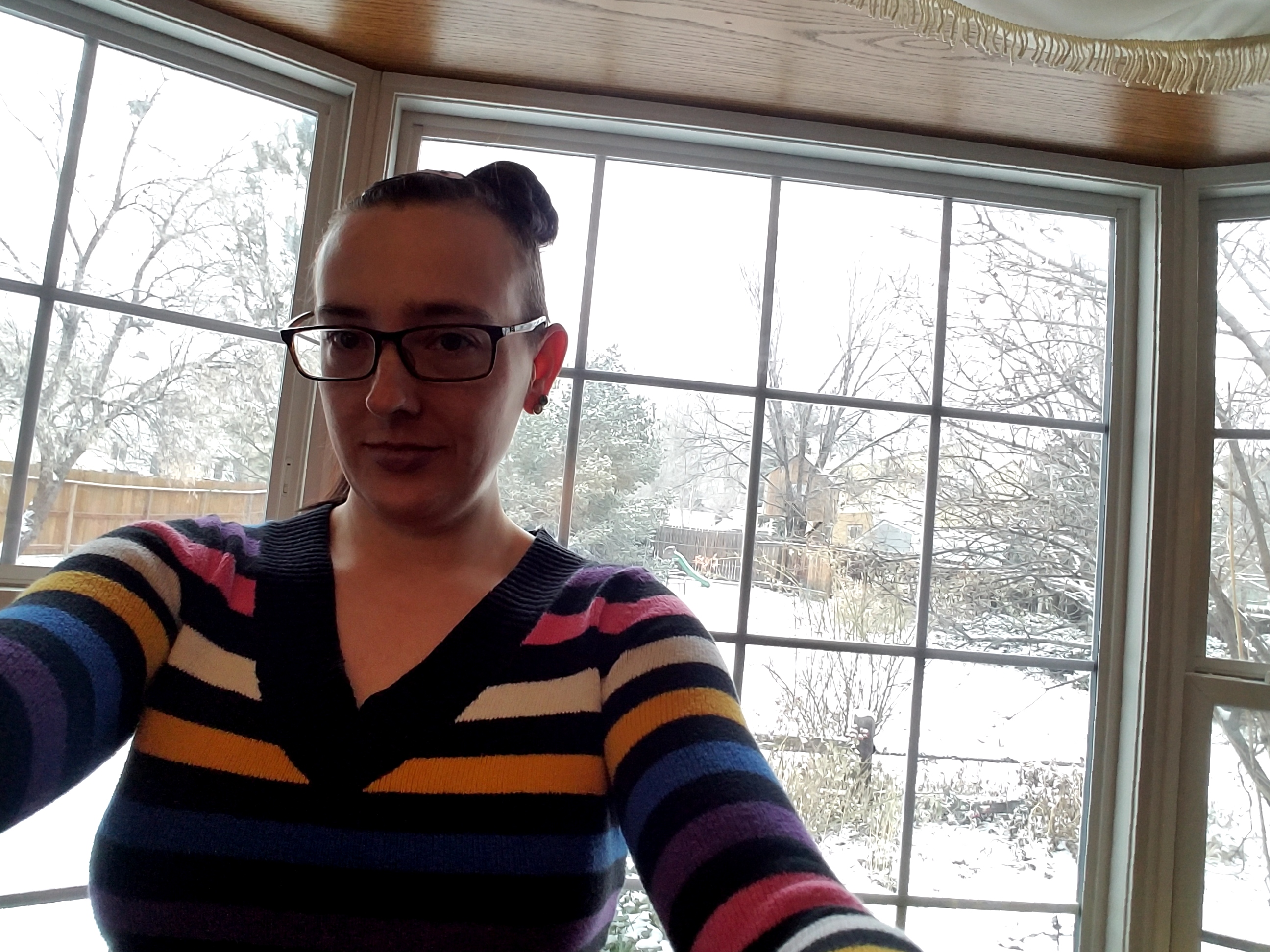 Mostly my boobs look huge and/or my head looks undersized in that picture.

My new tablet doesn’t have a very good camera, it seems. And it’s not like I haven’t taken a billion pictures of Galileo sneepin’ on the end of the top of the couch, but here’s another: 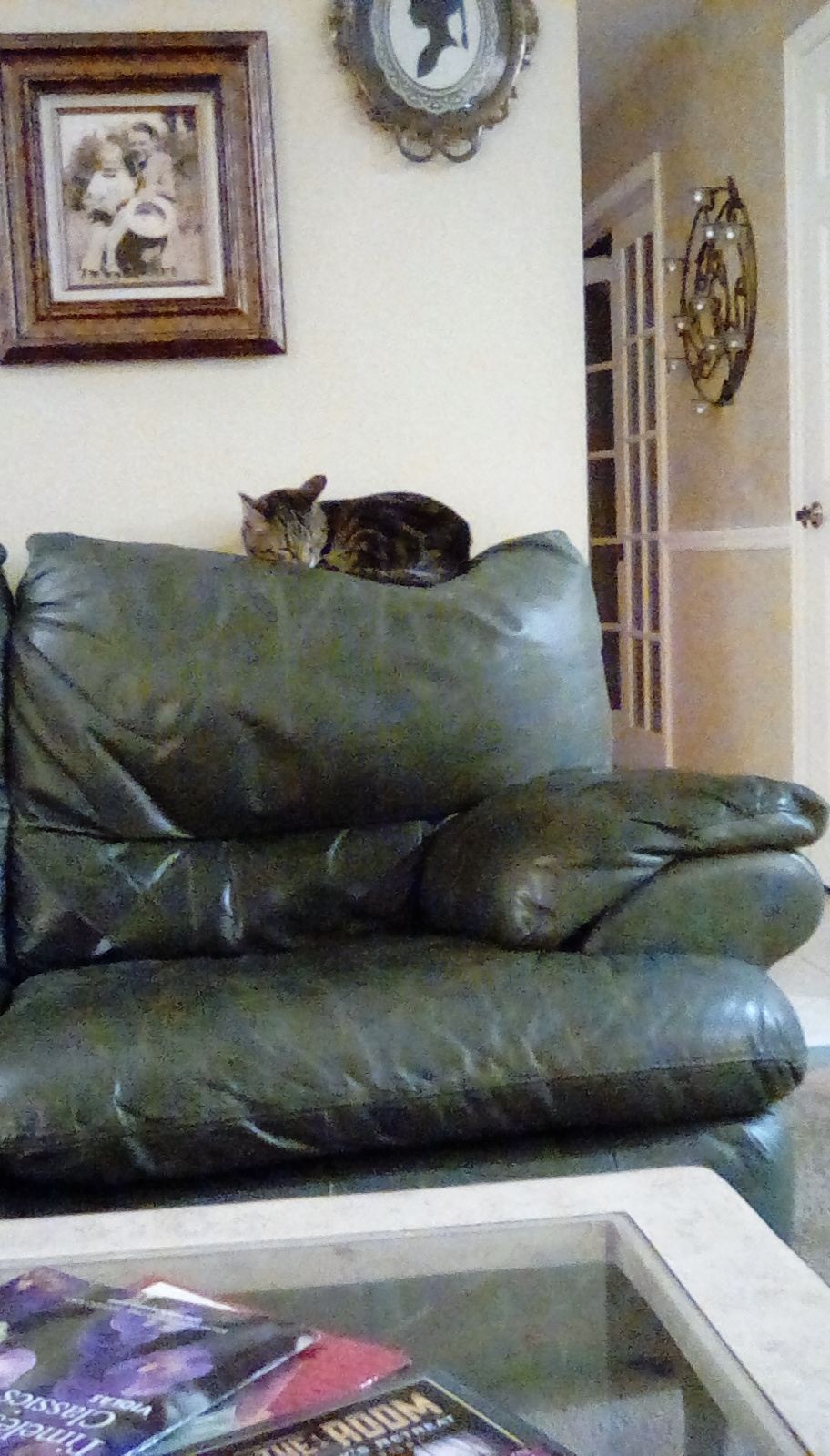 Also I have taken an equal number of pictures of him sneepin’ on a coat or jacket lying on the couch, but here’s another one of those too: 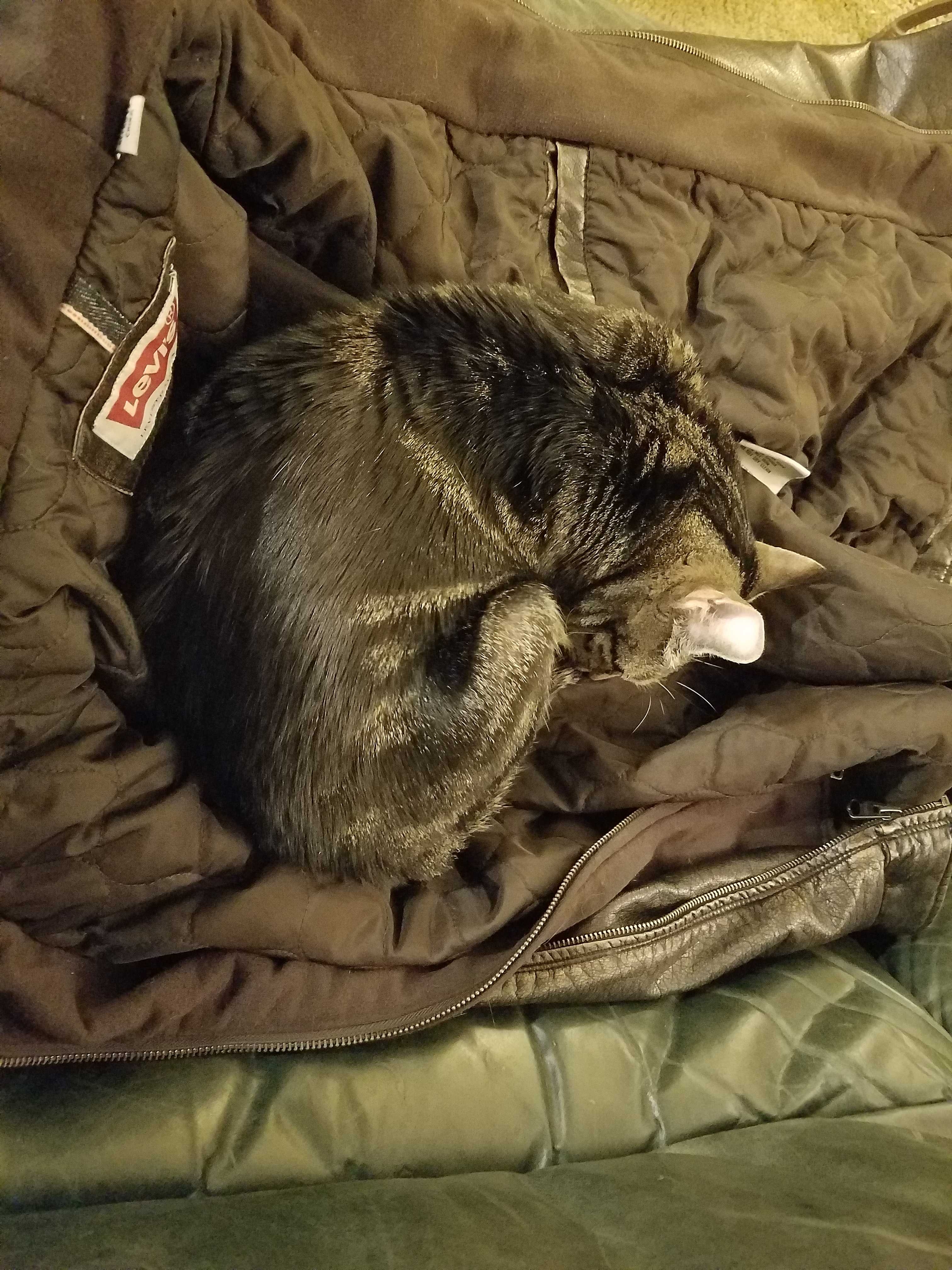 There’s a famous statue in my city that’s famous for being IN THE MIDDLE OF AN INTERSECTION and causing lots of traffic accidents. It’s a nice statue besides that, though, and the other day it looked pretty cool on the way home from work. 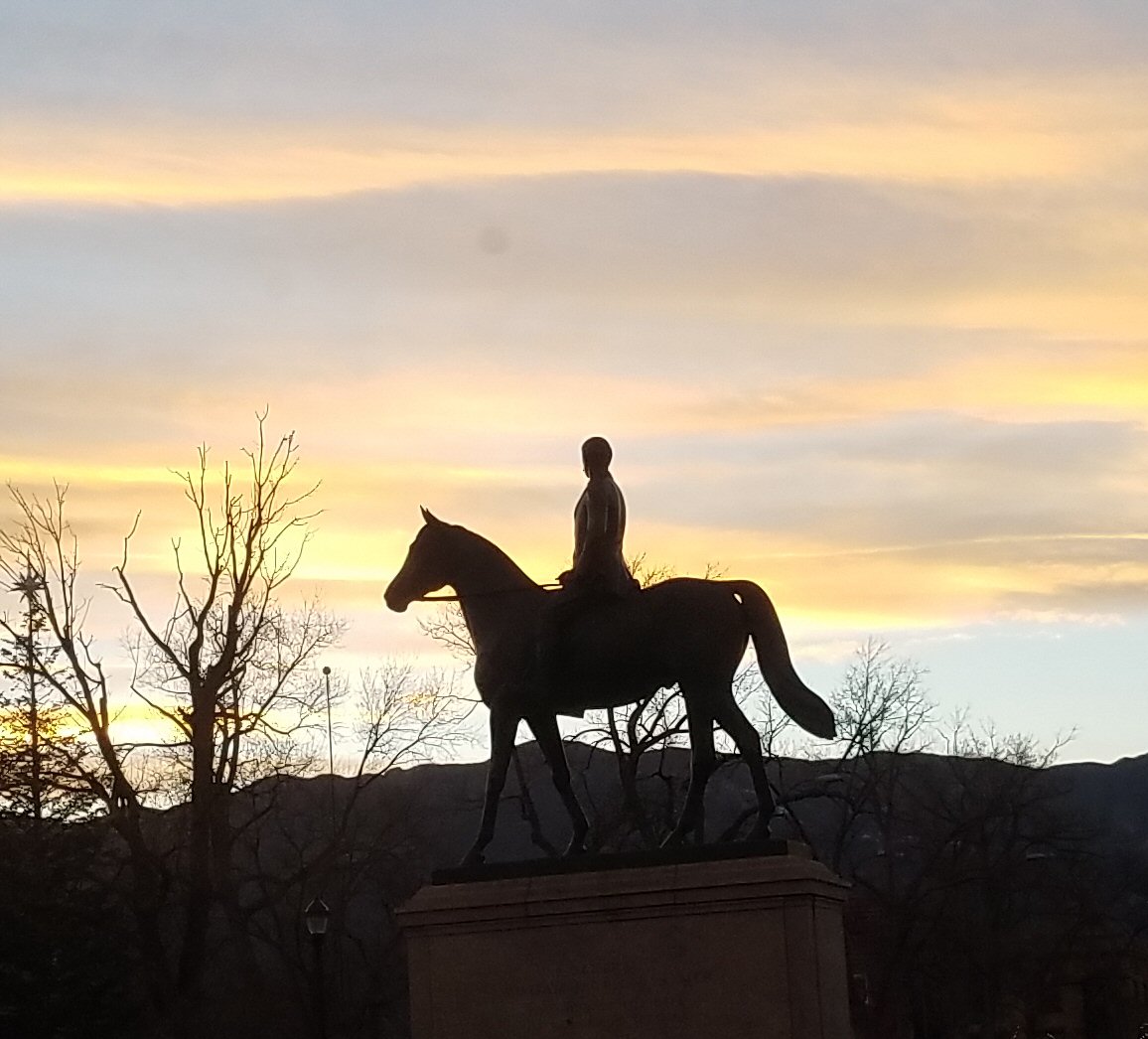 One of the games we got at Christmas was a tabletop escape room. We didn’t get around to playing it until just the other night, and at one point brother was hogging one of the clues. So I took a picture in order to study it at the same time he did.

This escape room game was soOoOo fun: very well put together, never too frustrating, interesting story, good puzzles. The brand is ThinkFun, and I highly recommend it. We’re going to get the other few escape rooms they’ve done and try those too.

Last we have an extreme closeup I took of myself just today to show off my freckles on tumblr: 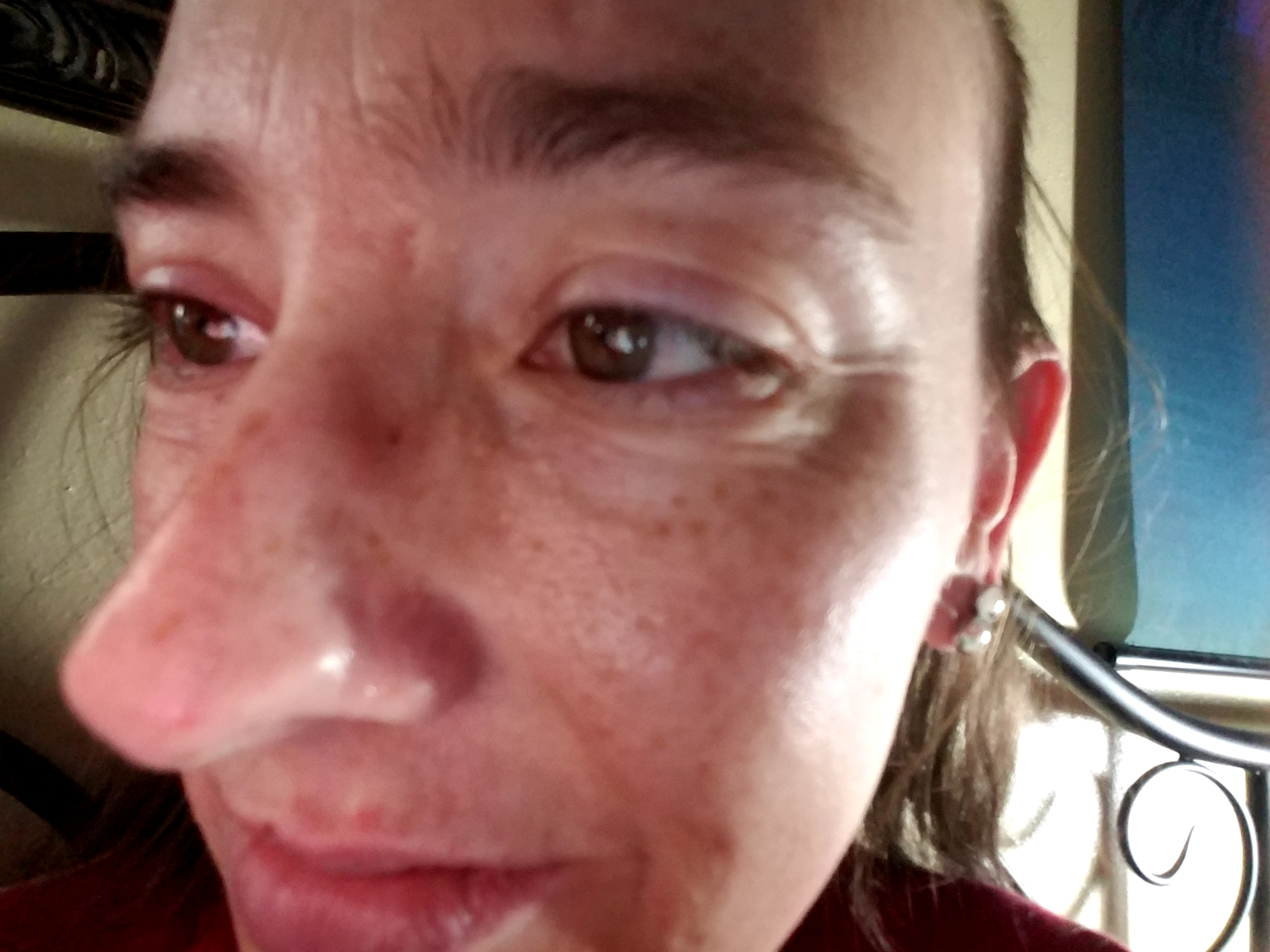 As I remarked on tumblr, look at my nose! I look like a Tenkuu no Escaflowne character!