I finally managed to get rid of my 8′ table — more details in an upcoming photo post — and the woman taking it off my hands brought her two kids with her when she came to pick it up. One of them was a girl of perhaps 7. She was maybe twice the size of Hiko, and a little shy of him. Cats, however, are apparently much more her thing than dogs.

She caught sight of Waybee sitting three or four steps down the staircase, and went into a kind of hypnotic trance. I wasn’t worried about her heading down to chase Peeka Waybe because I knew she would never catch her and, in fact, would probably never even catch another glimpse of her. And I wasn’t like I didn’t know how she felt; I may be thirty years older, but cats kinda send me into a hypnotic trance as well XD

But I was a little surprised when, not twenty seconds later, she reappeared coming back up the stairs carrying Galileo. And did I mention this kid is tiny? She looked like a shrunken adult carrying a young tiger. And Galileo had this bemused expression like he didn’t quite know what what was going on. He’s a pretty nice cat in general, though, so he wasn’t reacting badly — just looking kinda blindsided.

He always struggles eventually, though, when he wants to stop being held, and it wasn’t like she could retain him when he was half her size and twice her muscle. So presently she had to put him down. And he immediately ran off down the hall with an even more poleaxed demeanor as if to say, I don’t really understand what just happened, but I kinda don’t want it to happen again. It was pretty damn funny.

It not infrequently happens that people bringing in cats for surgery have no idea of their cat’s sex. Like, ‘not infrequently’ is an understatement; this actually happens stupidly often. Balls are… balls are such a good indicator… folks…

Anyway, the other day, a supposed girl cat steps out of her carrier and has big ol’ jowls and looks like she’s probably eleven pounds. And when I stick my hand back underneath, hey! guess what! So I says to the owner, “Well, I have some news for you… This is a male cat.”

And the daughter, probably twelve years old but seeming developmentally challenged in some way or other, bursts into tears. “I don’t want her to be a boy!” she sobs uncontrollably.

You guys, there was nothing either the mom or I could do to make this kid feel better about the news that her beloved Panda was actually a boy. Nothing. And I hate to say it, but her despair got funnier and funnier the longer she expressed it.

A dad came in with his 8-year-old daughter’s cat for spay, and along with the cat and some food for her he also handed me a letter. It was thoroughly taped into its envelope, and he told me, “I don’t know what this says. It probably asks you not to spay her, since she wants her to have kittens.” Well, here’s the letter: 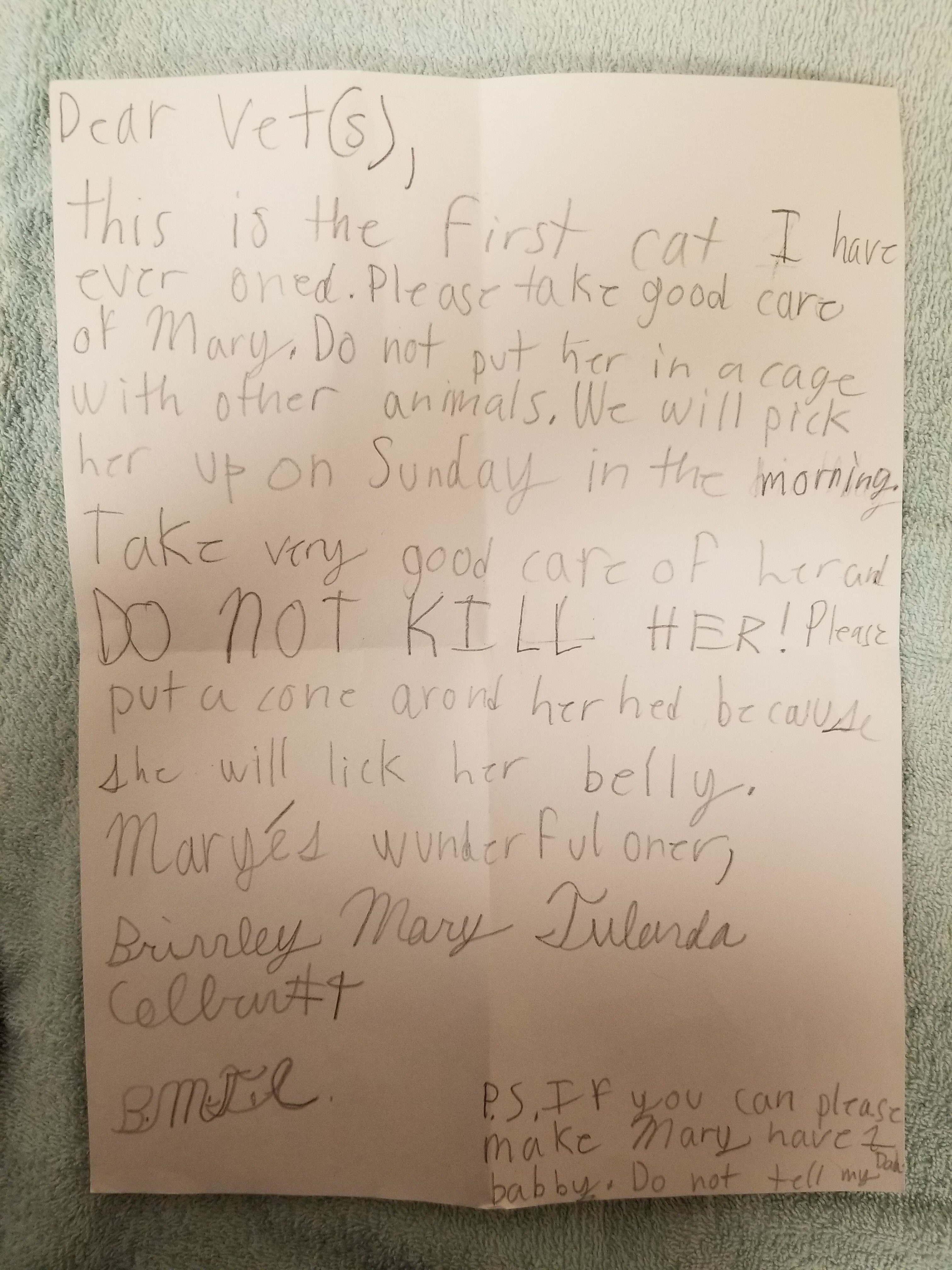 I could spend an hour unpacking all of that awesomeness, but I think I’ll let it speak for itself. Long story short, little girls and cats are an amazing combination.