TLY — Since reaching linear completion, I’ve written those two scenes I wanted to insert. The “goodbye” scene turned out to be less “goodbye” than I had anticipated, which I think is going to work. The characters aren’t at a point where an actual goodbye between them is a good idea. In the next book they’ll be sure to have one, though.

So now I’m working on my list of stuff that needs to get done, and doing general editing as I go. I still have no idea how long this is all going to take.

I also have no idea whether I’m going to stick with my original plan of having certain family members read the book, in order to give me general/story impressions, before I get too deep into sentence-specific editing. I don’t typically solicit that type of feedback because it always seems like a waste of everyone’s time. The decisions I make in writing are deliberate (even if they may be bad ones), and therefore anyone’s “I don’t think such-and-such was a good idea” comment must usually elicit the reaction, “Well, I disagree.”

Still, they might have some opinions on needed changes that I would agree with. Maybe I’ll have them read it still. We’ll see.

Blood Contingency part 21 — Good news! What eventually became part 21 is actually only the first half of what I wrote; the scene goes on through one card game and into a second. I was very pleased when it turned out to be almost twice the length of the chapter standard, since then I could divide it up like this. That relieves me of some huge concerns I was feeling about parts 31 and 33, which were previously both supposed to be devoted to the same events. Honestly I think coming up with one part about those events may end up being tricky; I was tearing my hair out trying to figure out how I was going to manage two.

Subject matter is still spread a little thin in the odd-numbered parts; it has been since the beginning, and it will be through to the end. I could still use at least one more even-numbered part in the right about now section. But I’m really glad I got to split this particular bit, with Meg and the card game, in half; it gives me more breathing room.

Of course it means the point of this scene is more diffuse, having it spread across two parts with a bit of a different story right in the middle like this. And since most of this part was just building up to what we’ll learn in part 23, that means this part seems particularly pointless… but what can you do. This fic has been a wrestling match since I started writing it; I never expected it to ease up in the middle XD Speaking of which, we’re almost 2/3 of the way through now!

Forgivably Wrong — After this story very frequently didn’t want to be worked on over the last year or so, progressing sometimes one sentence at a time, it all of a sudden became eager and got finished up ridiculously quickly. I’m not complaining, but it’s always so weird when that happens.

My initial feelings about this completed work are relatively indifferent. I’ve mentioned before how I sometimes come to dislike something by the time it’s done, and a story like this that took forever (relative to its length) can be worse than anything else. So I won’t put down a lot of thoughts about it at the moment.

The one thing I do want to mention is that the third flashback turned out more serious than I’d planned, and I’m happy with that. The whole story is so silly, it was kinda nice to throw in a brief indication that Saitou and Sano can connect on a slightly deeper level than the rest of their interactions would seem to suggest. Sano’s not entirely frivolous, and Saitou’s not just attracted to him because he’s hot and kinda funny.

Oh, also, I gotta stop writing these Tokios I’m immediately going to have a crush on.

Actually, I’ve been daydreaming lately about writing a collection of short stories about my collection of Tokios — like, one about each Tokio, and maybe something sci-fi at the end where they all meet together in a single reality and collaborate to save the world or whatnot. It’s just a daydream at the moment, but it may become more serious if I get actual story ideas.

Aku Soku Zan(za) — So as I mentioned when I last talked about this fic, it has been a strong temptation to let Sano and Tokio continue their relationship for a while longer than they did in the original story. Obviously I still chose to end it the way I originally did, but there’s that lingering longing for some real love-triangle drama.

However, I’m really pleased with the breakup conversation. Actually I was pretty damn impressed with how I’d written it for the original; I didn’t have to change much. I love the idea of Sano having to work — actually work; he can’t just be lazy about this — to clear away various aspects of his time as Zanza, and finding that he’s got all these vestiges of his former life that he hasn’t even thought about. And I don’t think it’s entirely unreasonable for a couple to realize after a single instance of sex that they’re not right for each other and they’ve made a mistake. Of course we’ll get into Tokio’s thoughts next time, but even with what’s come out so far I think the whole thing makes sense.

It’s from a narrative point of view, not one of believability, that it feels like something of a cop-out. But as I mentioned before, I just didn’t want to get into such large-scale reworking of the story. So if this is a flaw in the fic, it’s one I blame mostly on my self of 2002, not my self of today. I mean, my self of today is too lazy to do that large-scale reworking, but still. I like this story how it is, and to a certain extent I’m paying tribute to the past more than creating a new work of art.

A picture of two dogs — A very long time ago– like, nine or ten months? –a former co-worker requested I draw her two late dogs. I was working on Merpoleon at the time, and couldn’t handle two large pictures at once, and after that didn’t get around to it for a bit. Then I bought my new desk and couldn’t work on large pictures at all. I finally got my beloved draft table, and then discovered that I didn’t actually have any paper. I thought I had, like, three sheets left, but that was not, in fact, the case. However, I eventually did make it to an art supply store, and I’ve finally started this thing. 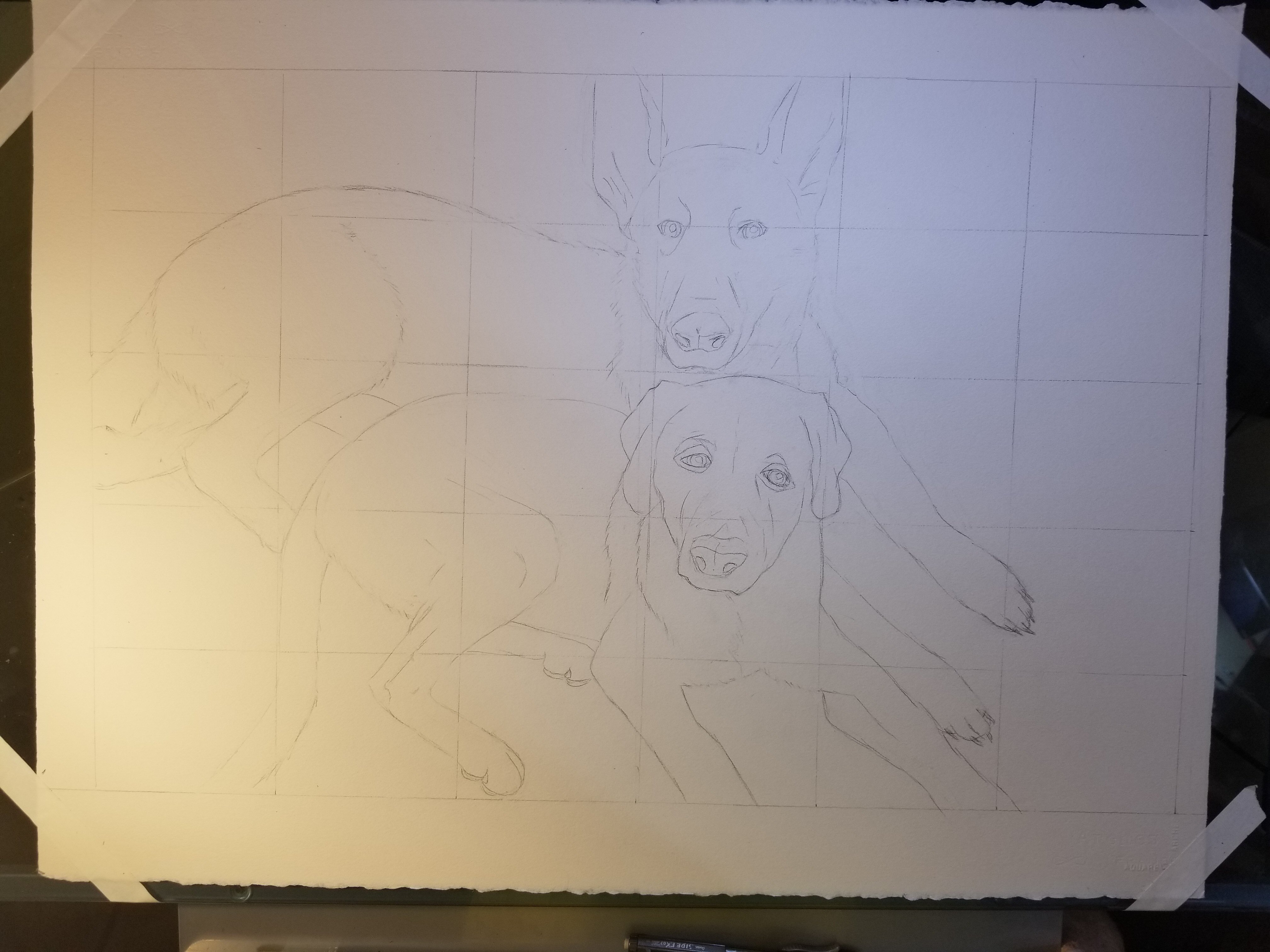 This project is already a struggle, because my photo reference of these two dogs is so small and so poorly lit that I can’t make out a lot of important details, and nobody seems to be able to provide me with any better pictures. I’m using images of other German shepherds and yellow labs, which is helping, but because of this the end result may not look anything like this German shepherd and yellow lab.

Still, I really like how Hammer’s face is looking at the moment. Ruger, on the other hand, looks like he hasn’t slept in a week; that’ll be better with color than lineart XD So we’ll see how it progresses!