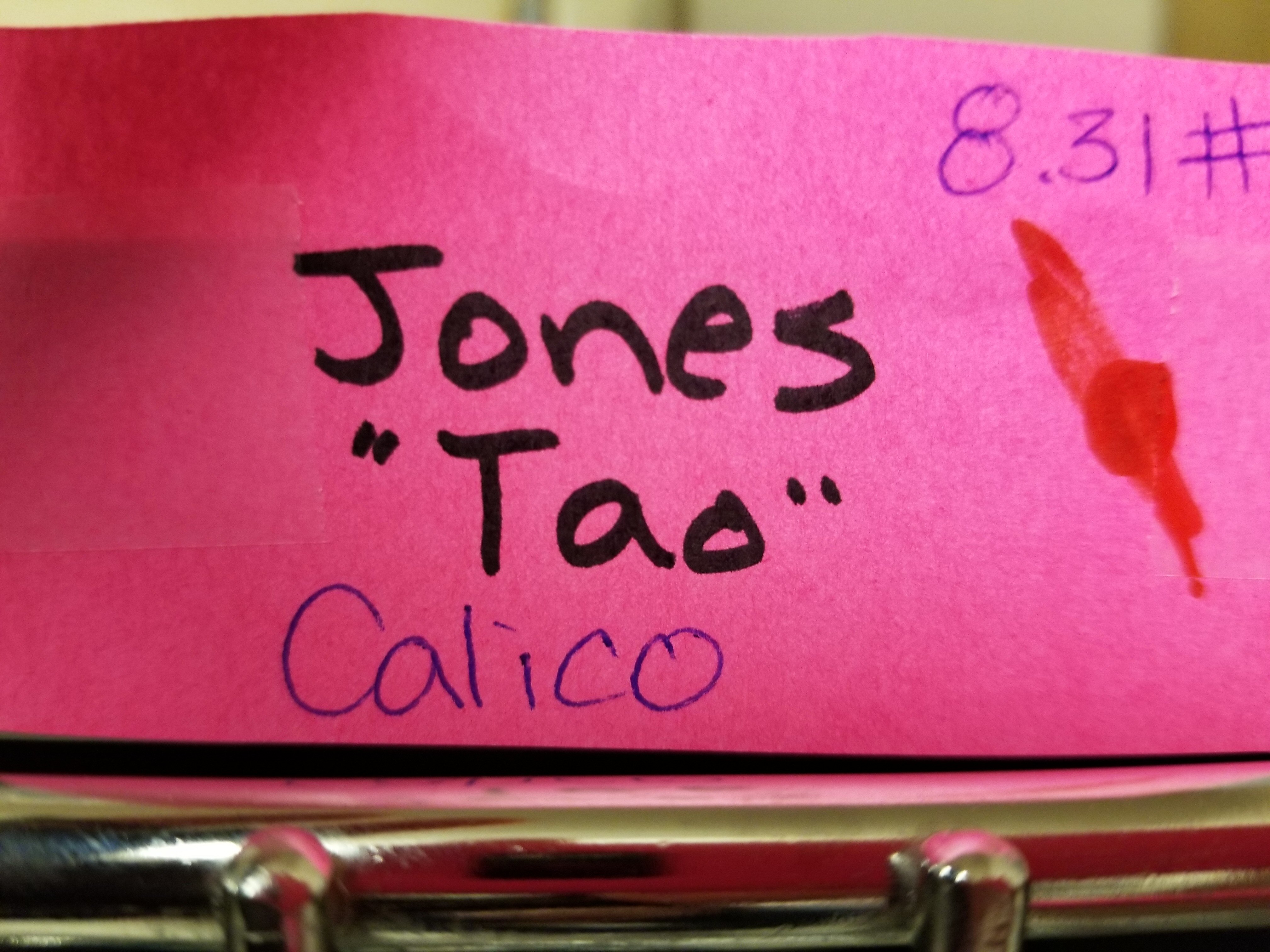 A lot of owners don’t consider how their animal’s name is going to combine with their last name. And it’s entirely possible he also didn’t know that “tao” is pronounced (more or less) “dao.” Did he have any idea of the pun he’d made here? I suppose we’ll never be sure.

So guess what! Zombie Girl has returned from England! It’s a sad situation for her, but the silver lining (for me, at least) is that we get to hang out again!!!!!!!!!!!!!!! And of course we ran errands, because that’s what we do. In the Arc, we saw this fuckery: 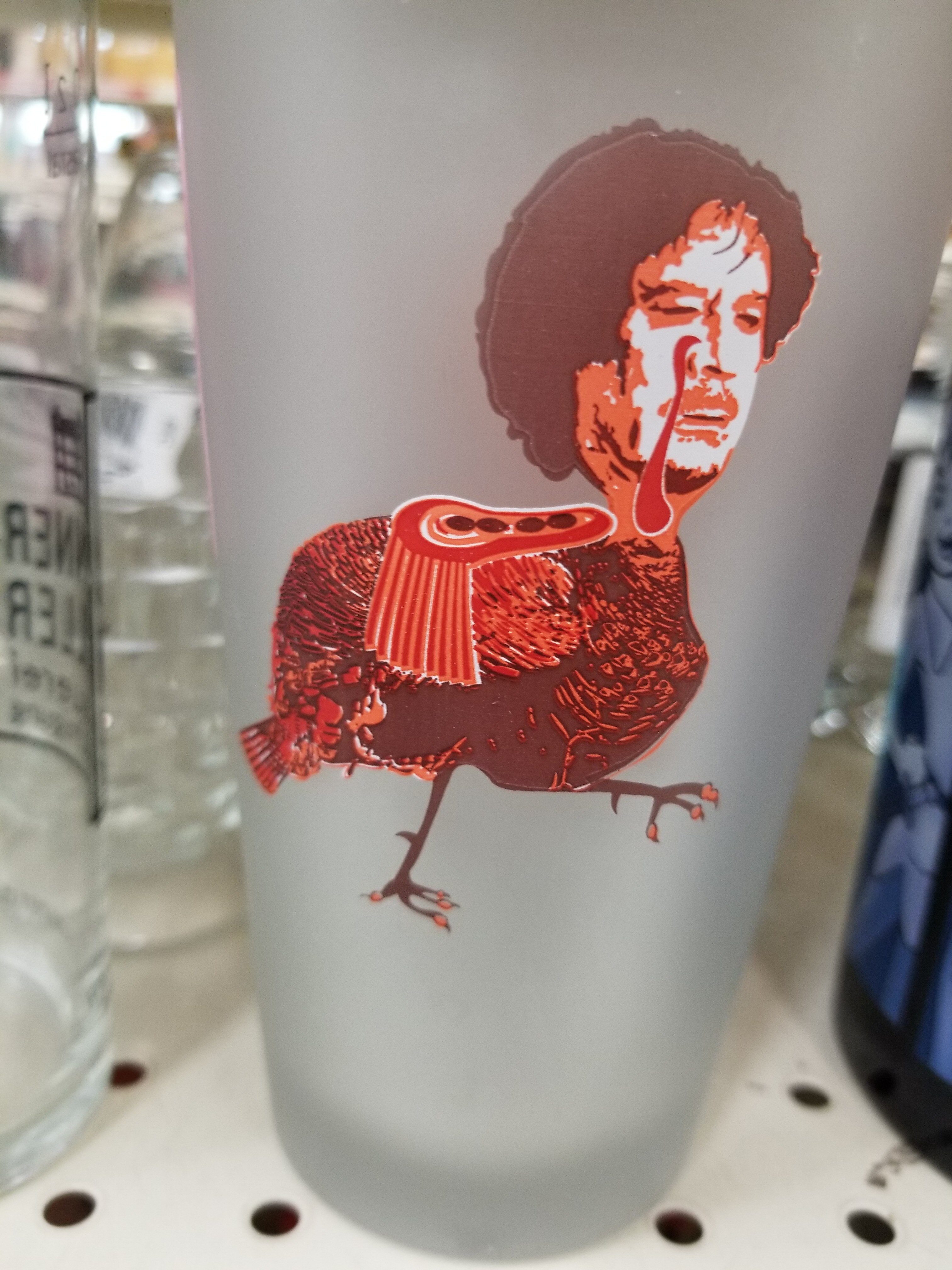 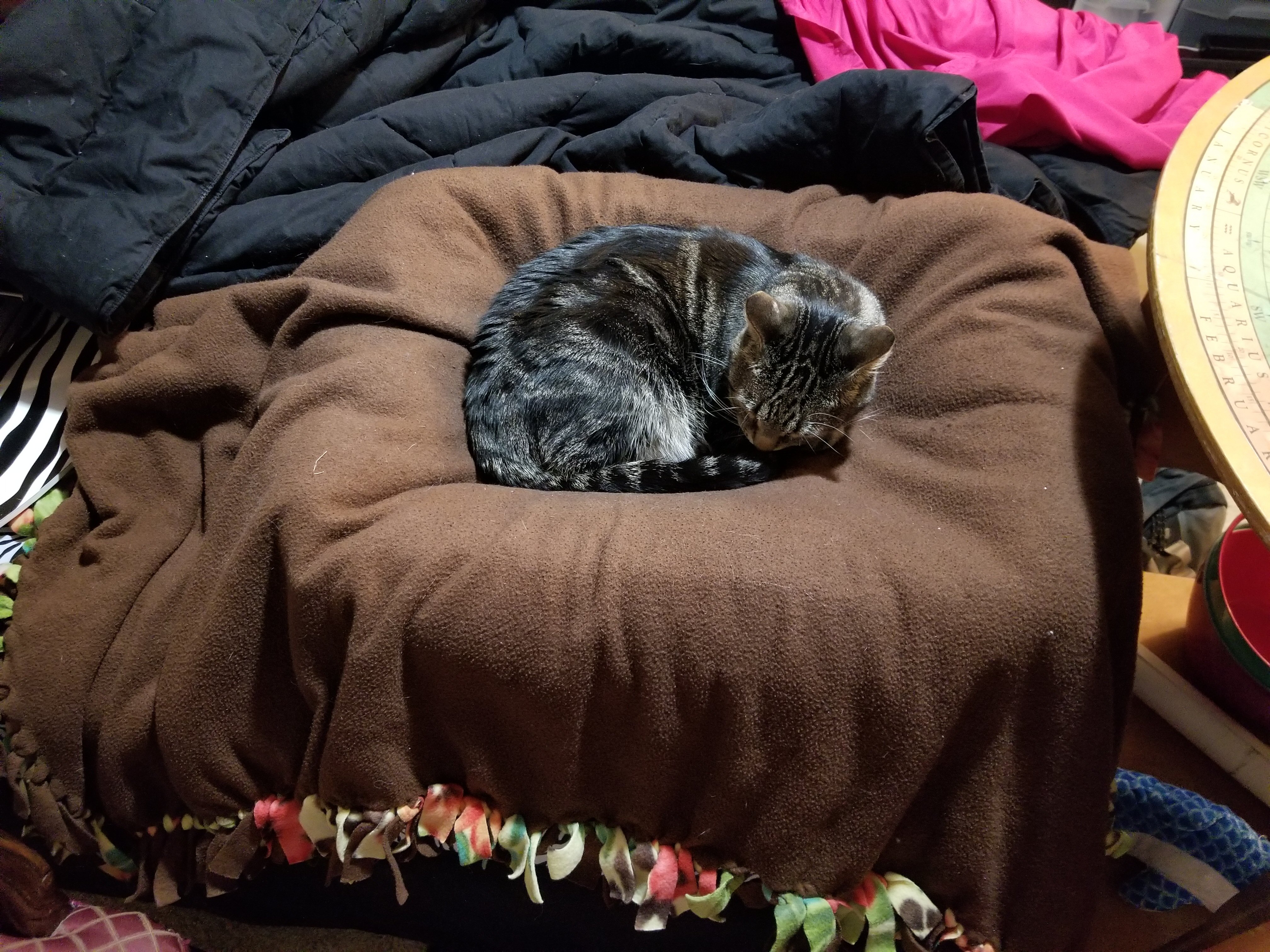 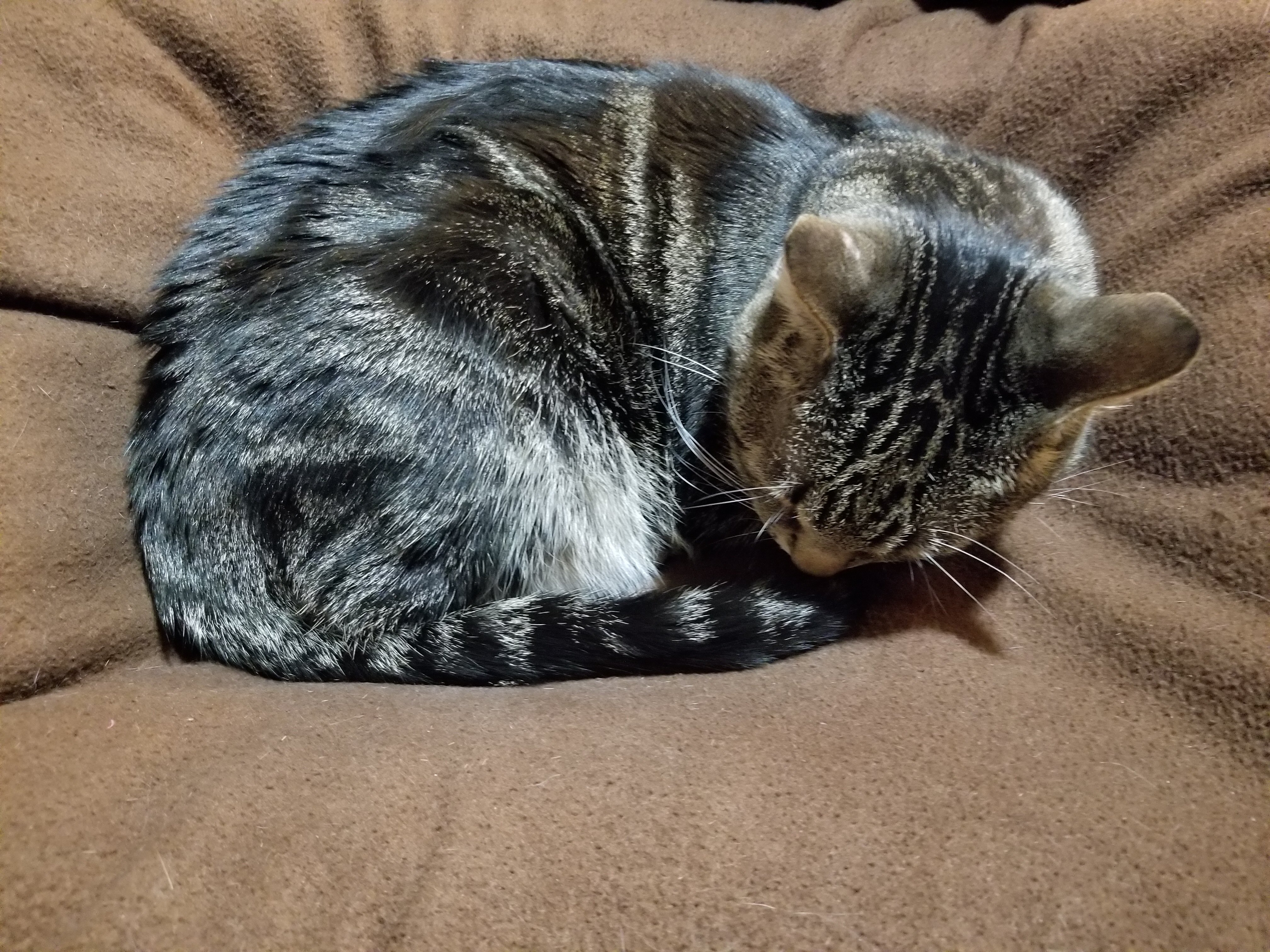 Little-Bed-on-the-Bed is a location name similar to Stratford-upon-Avon. Here we see Galileo there in the sunshine.

Whilst ZG and I were out and about, we walked through Burlington Coat Factory and saw my new dress for $20. I brought it home and laid it on the bed, and Waybee immediately approved it. 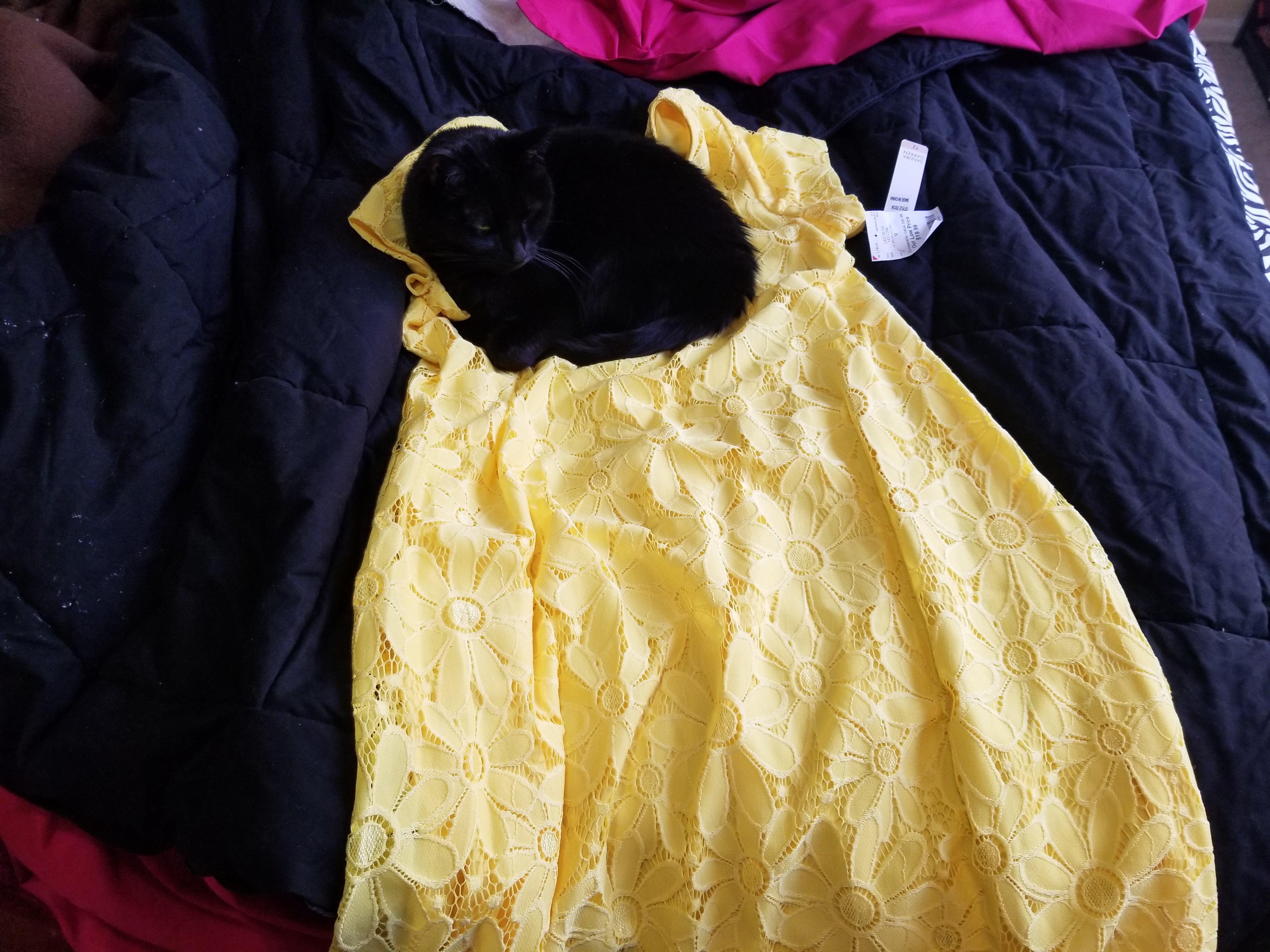 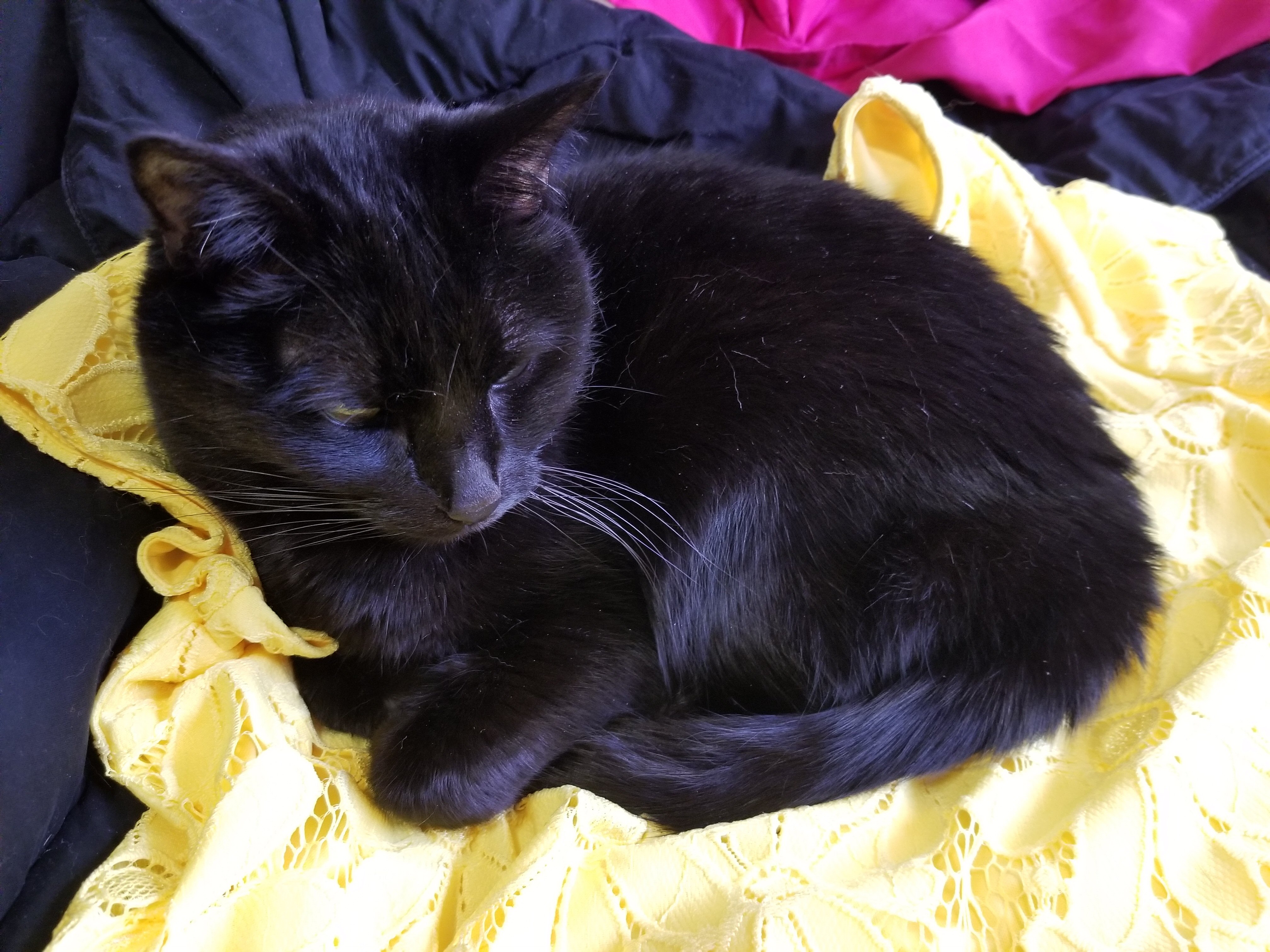 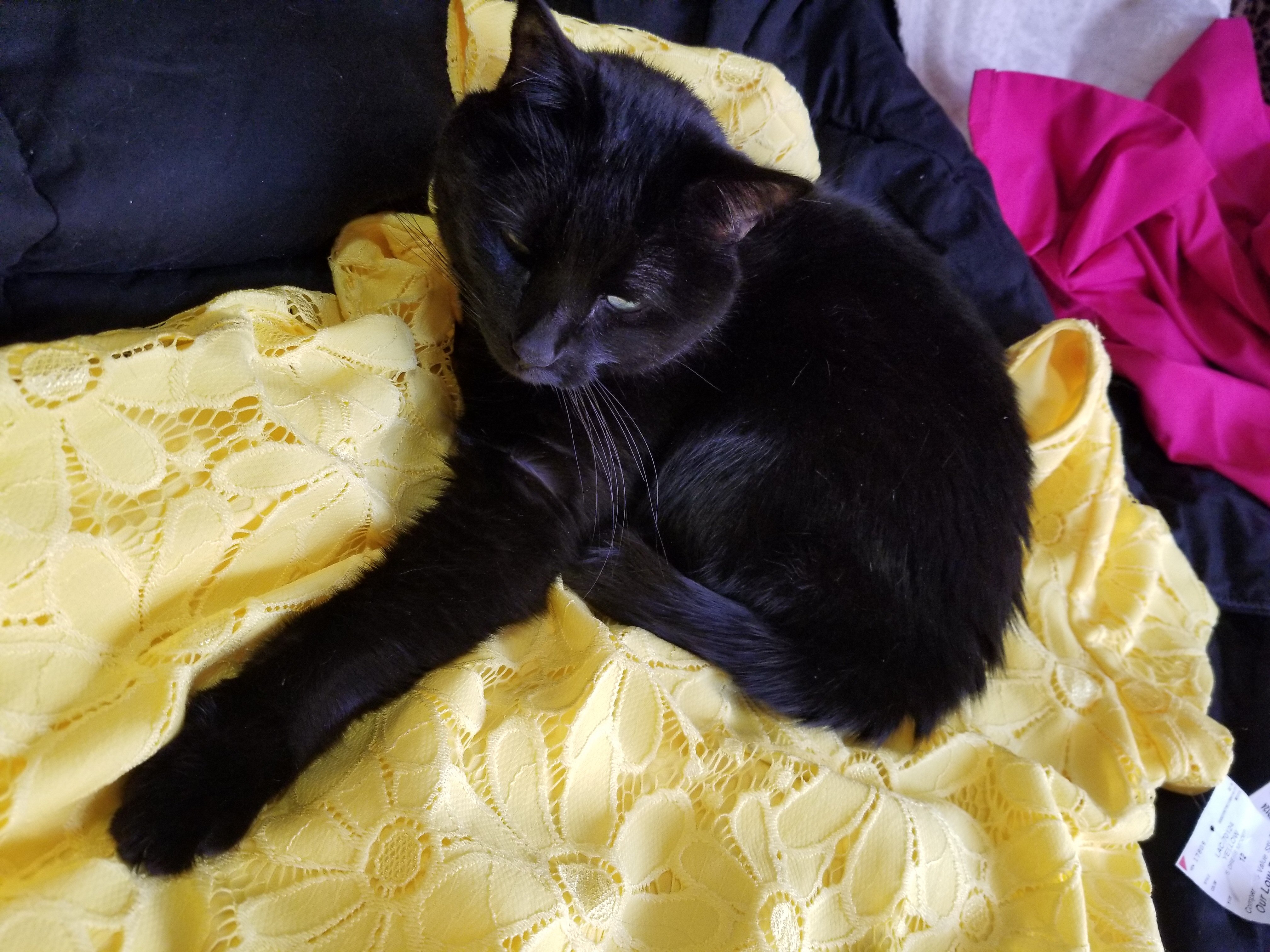 Then when I wore it the next day and went for a selfie, Beekles was kind enough to approve it as well. 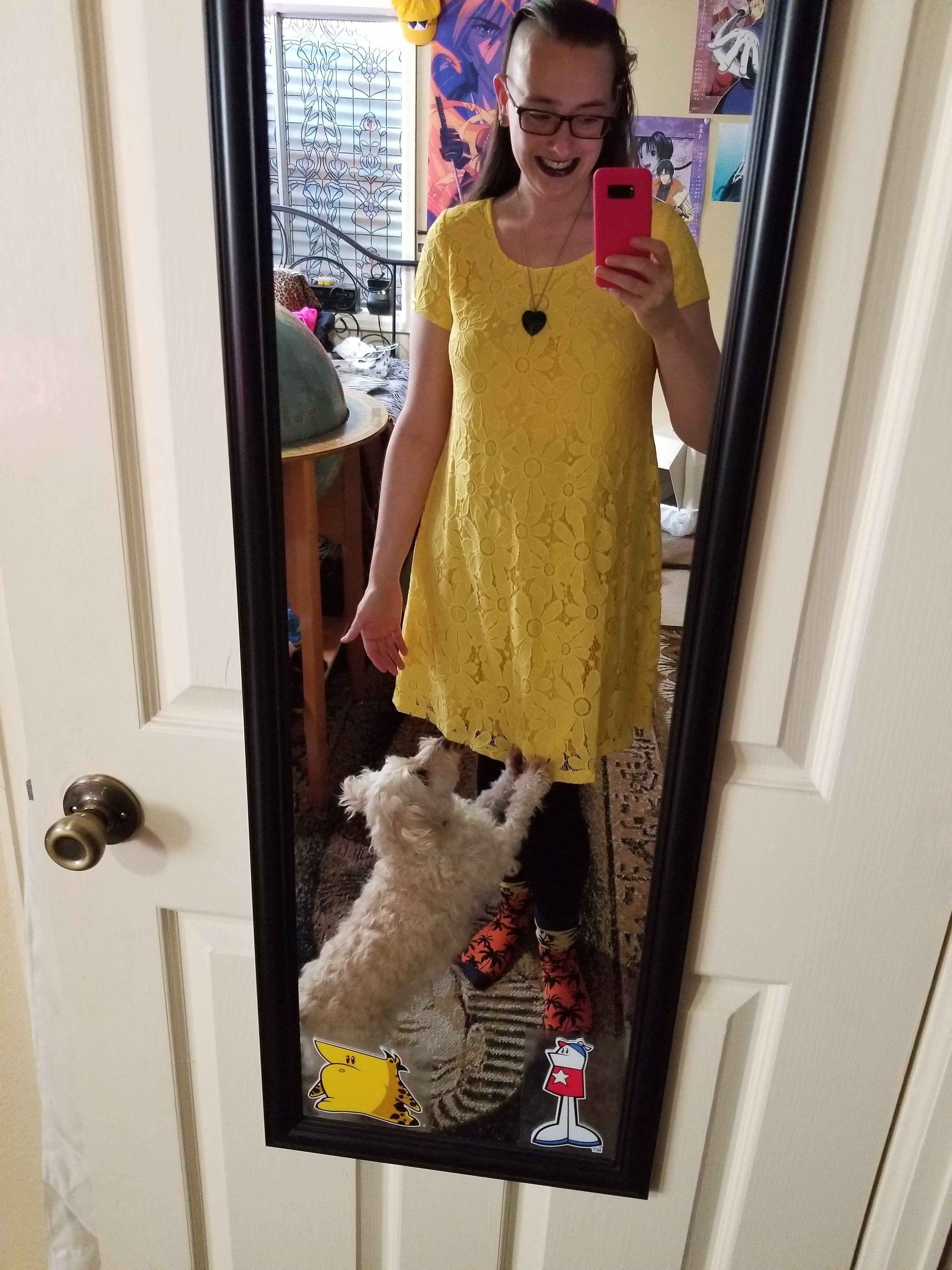 OK, so I washed my blanket. With three animals that routinely lie on top of it, this has to happen more often than it otherwise would. Anyway, apparently a slight difference in the arrangement of blankets on the bed is just ridiculously compelling, because Stipety slept on the exposed electric blanket for, like, four hours. 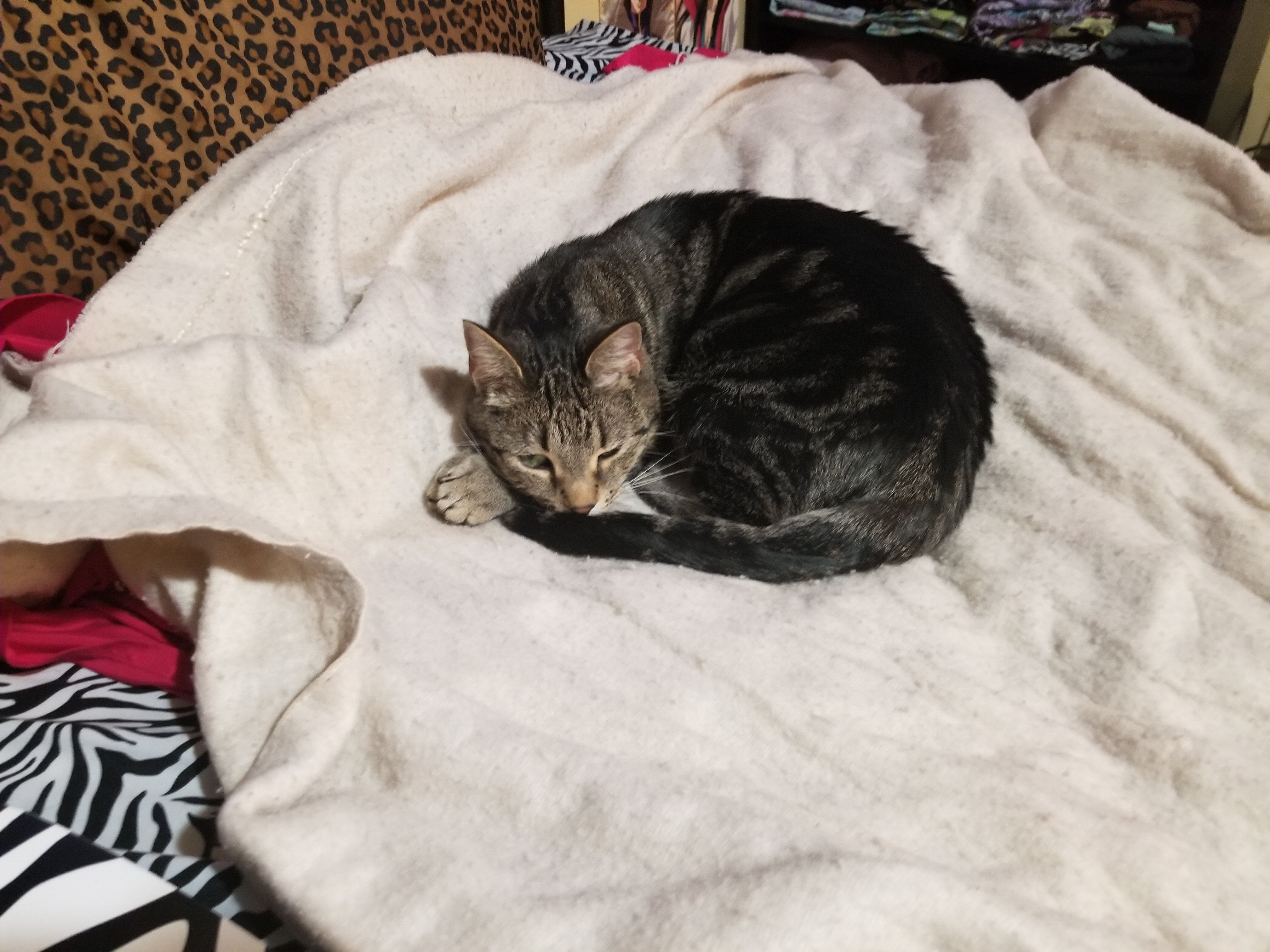 I found this recipe for sugar-free pumpkin bread that I tested and amended until it’s just perfect. It’s not only freaking delicious, it’s beautiful. I had to take a picture of the loaves I made that day. 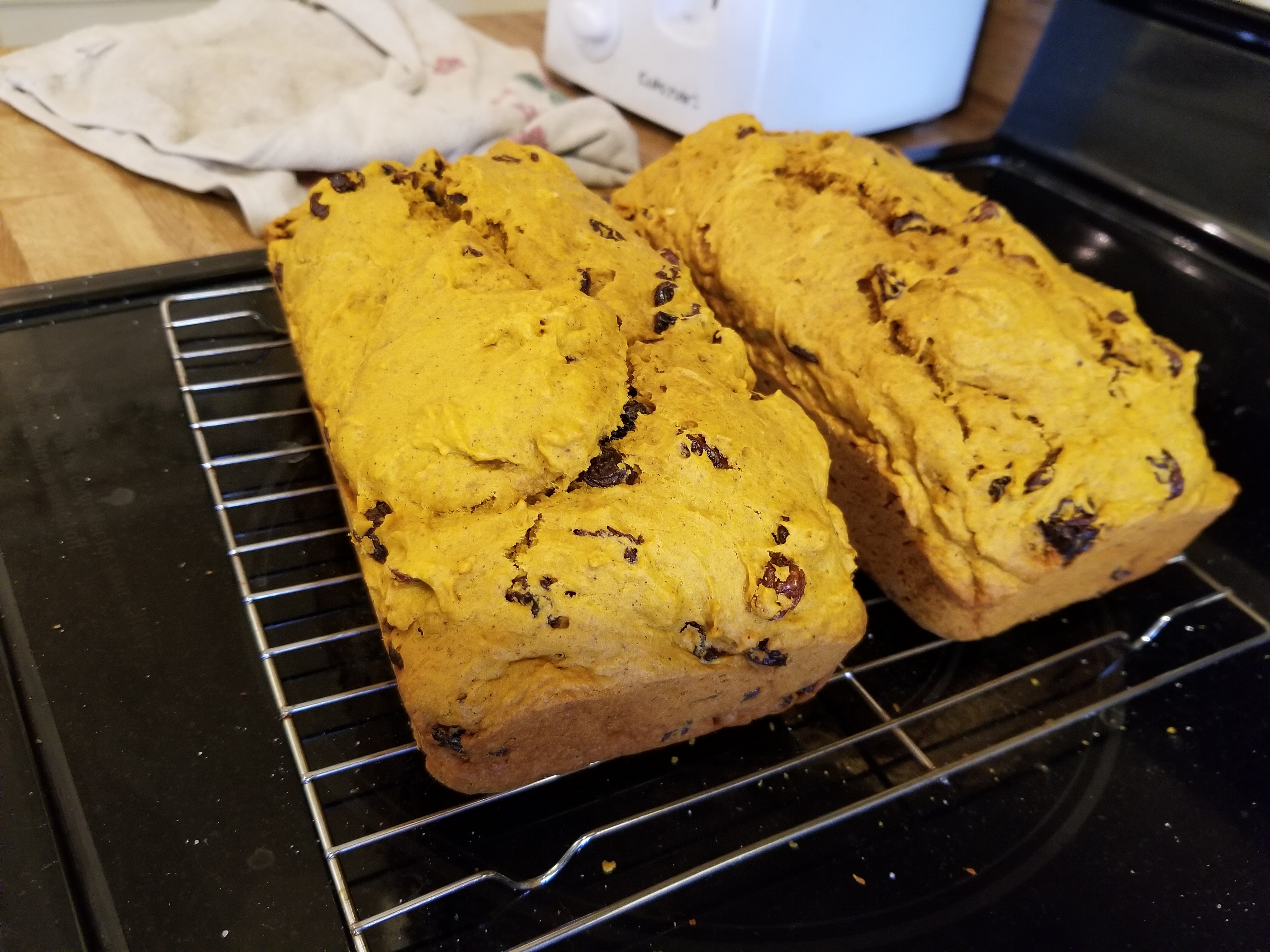 I’ve mentioned before how much 2/3 of the Little Animals like peas, right? Hiko has a ridiculous sixth sense for when someone dishes themselves some peas at dinner, and Stipes will do anything to get some. Of course, Stipes wants all the food, and he always jumps up on my lap at dinner time in the hopes that I’ll share.

So the other night he was on my lap as usual, and I was eating some peas, and he got the bright idea to reach out and bat at the fork. My hands are not as good as they used to be, and I drop things more frequently these days, and the cat knocked the (empty) fork right out of my hand. So then I couldn’t eat any more peas, and I certainly wasn’t about to give him any after that little stunt. So we just sat there for, like, fifteen minutes staring at the peas on my plate.

Eventually he decided to try a different angle, so he climbed up onto my shoulder and stared at the peas from there. He’d never done that before, and it was so amusing and comfortable that this time I did reward him with some peas. And mom took pictures from across the table. 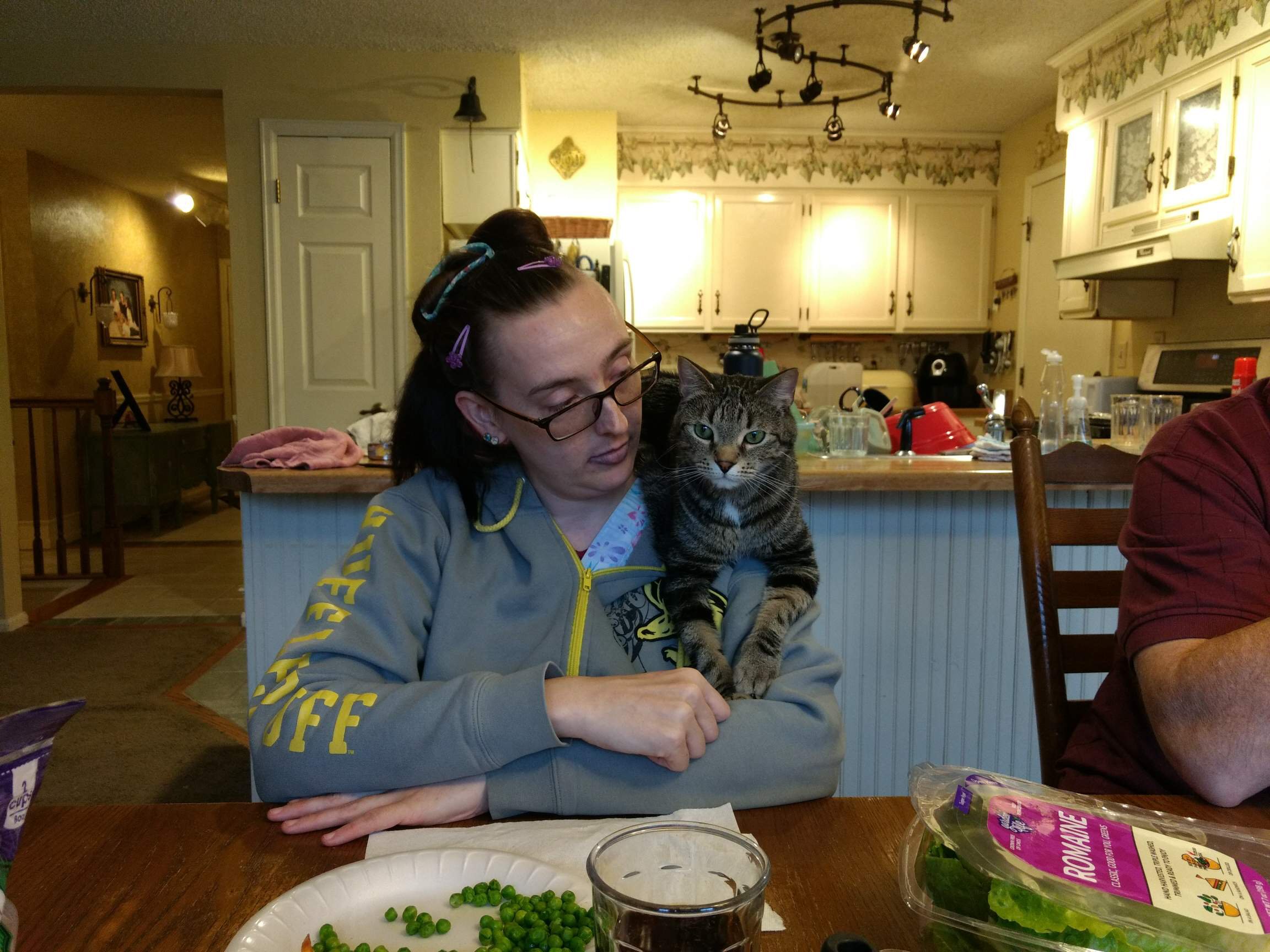 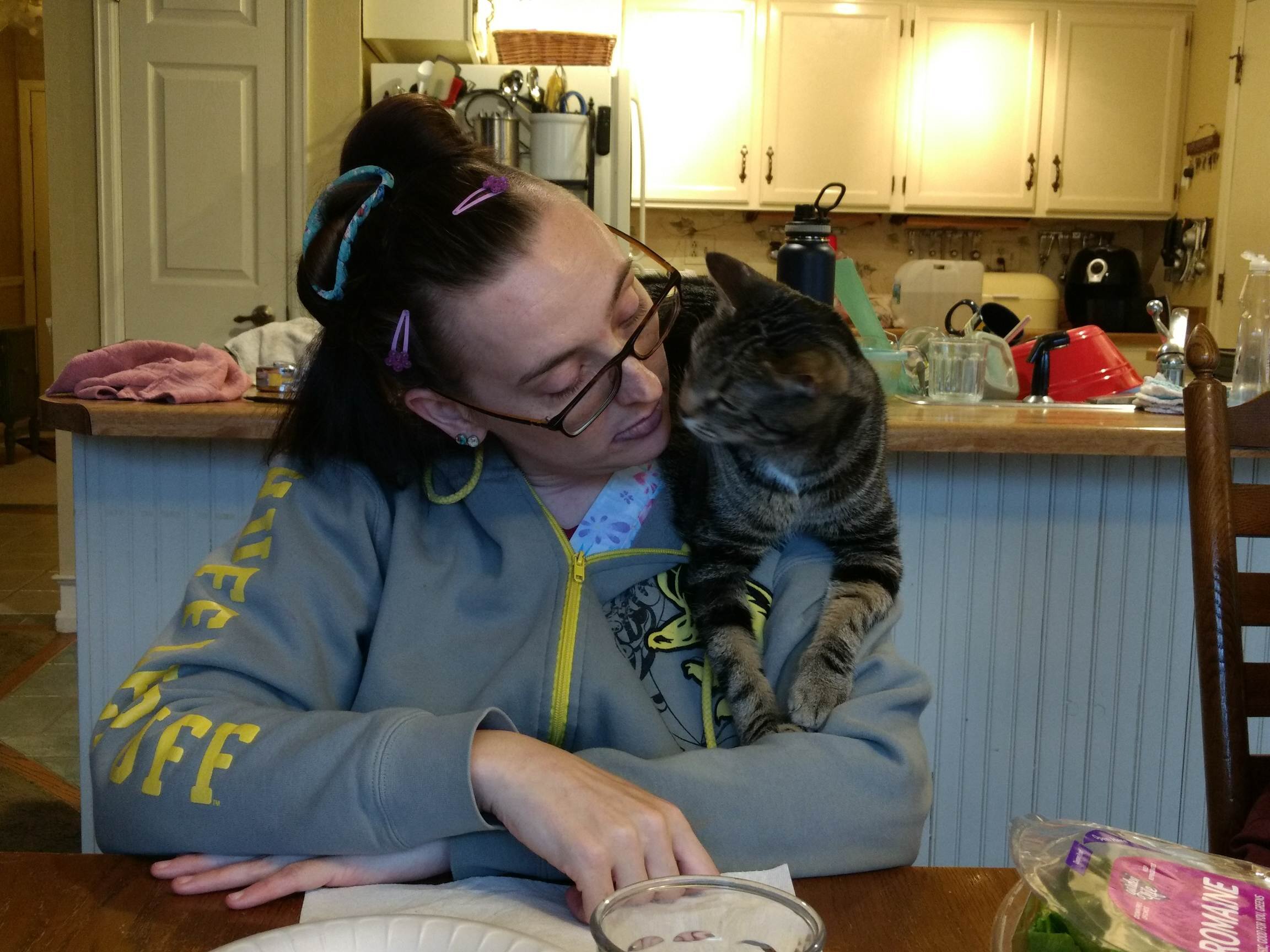 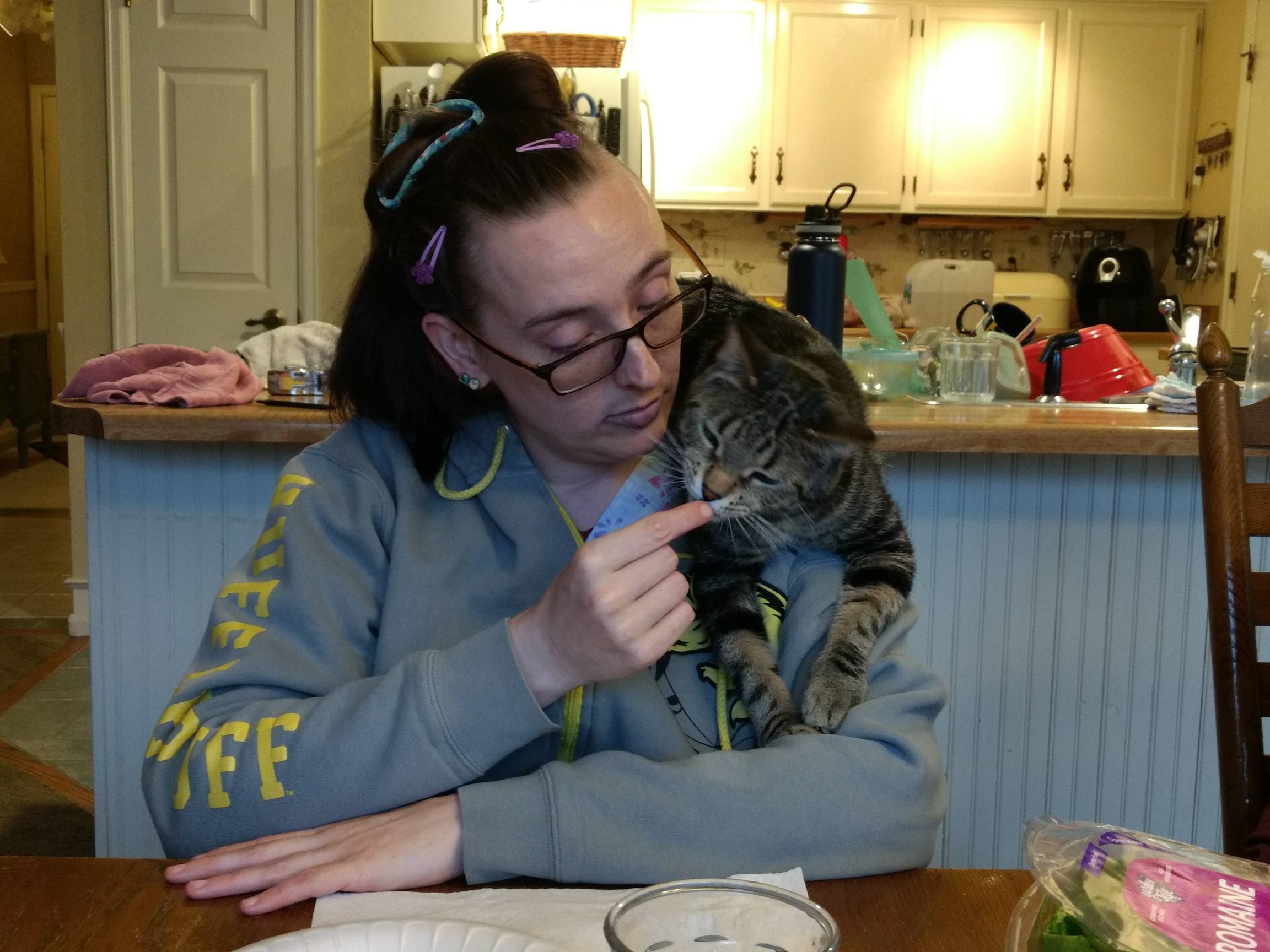 I appreciated this dog’s name: 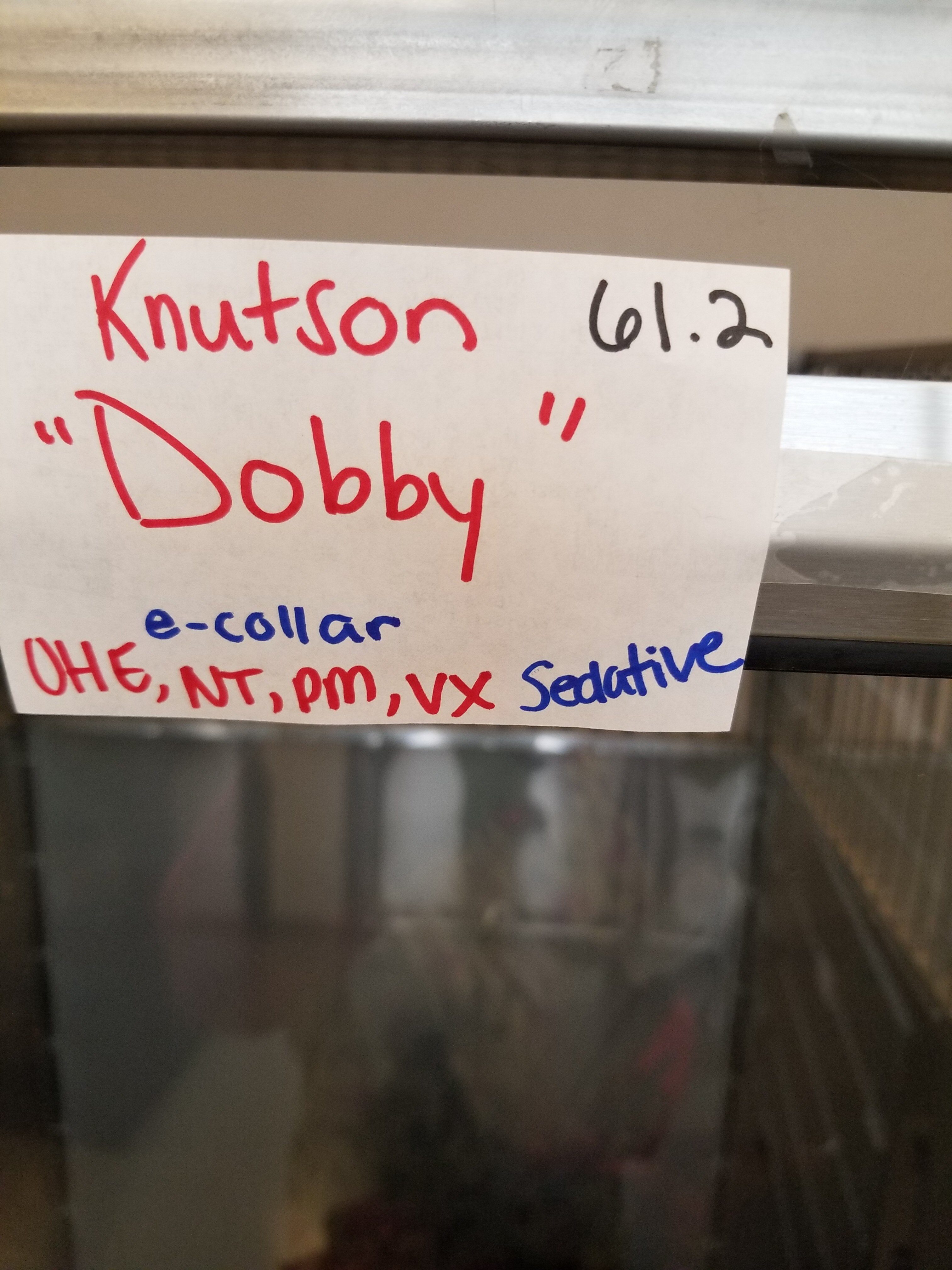 And then these two cats I deliberately put next to each other, despite never having seen Big Hero 6, because I thought it would be most appropriate that way: 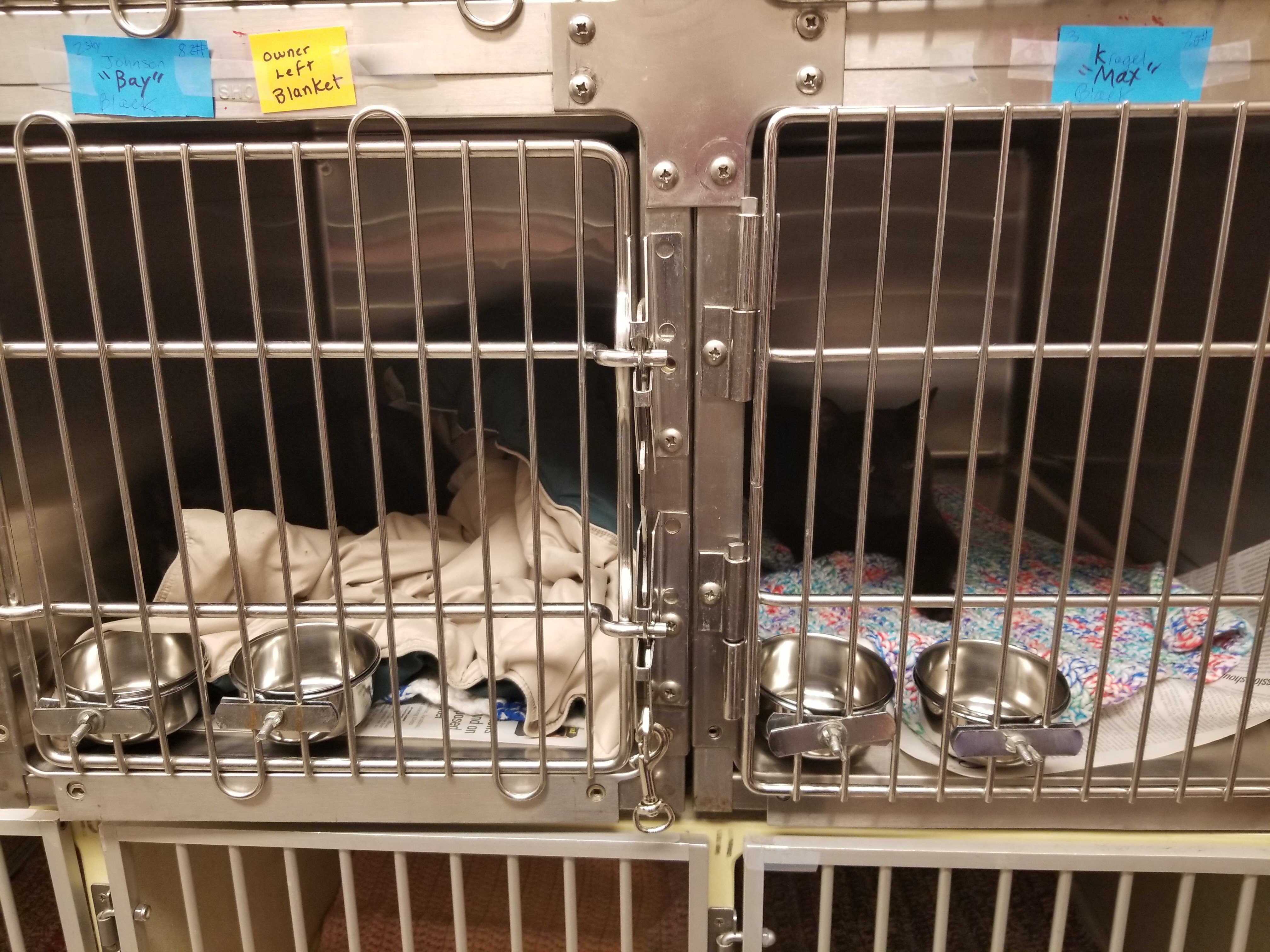 If you’re wondering about that K, I’ve been trying lately to write the last name in pen and the cat’s name in marker because it makes it easier to determine at a glance what the cat’s name is. However, this is a new idea, and I keep forgetting. That time I remembered only after the first letter of the last name.

Before I went to Disneyland, I bought a new phone in some haste because the previous one had the worst battery life in history. I didn’t have time (nor wanted to spare the funds) for a case for the new one, so I bought a $5 cheap-ass pink thing from Wal-Mart (which you can see in all mirror selfies since that time). But the other day I finally got around to ordering a new proper phone case, and it arrived yesterday. 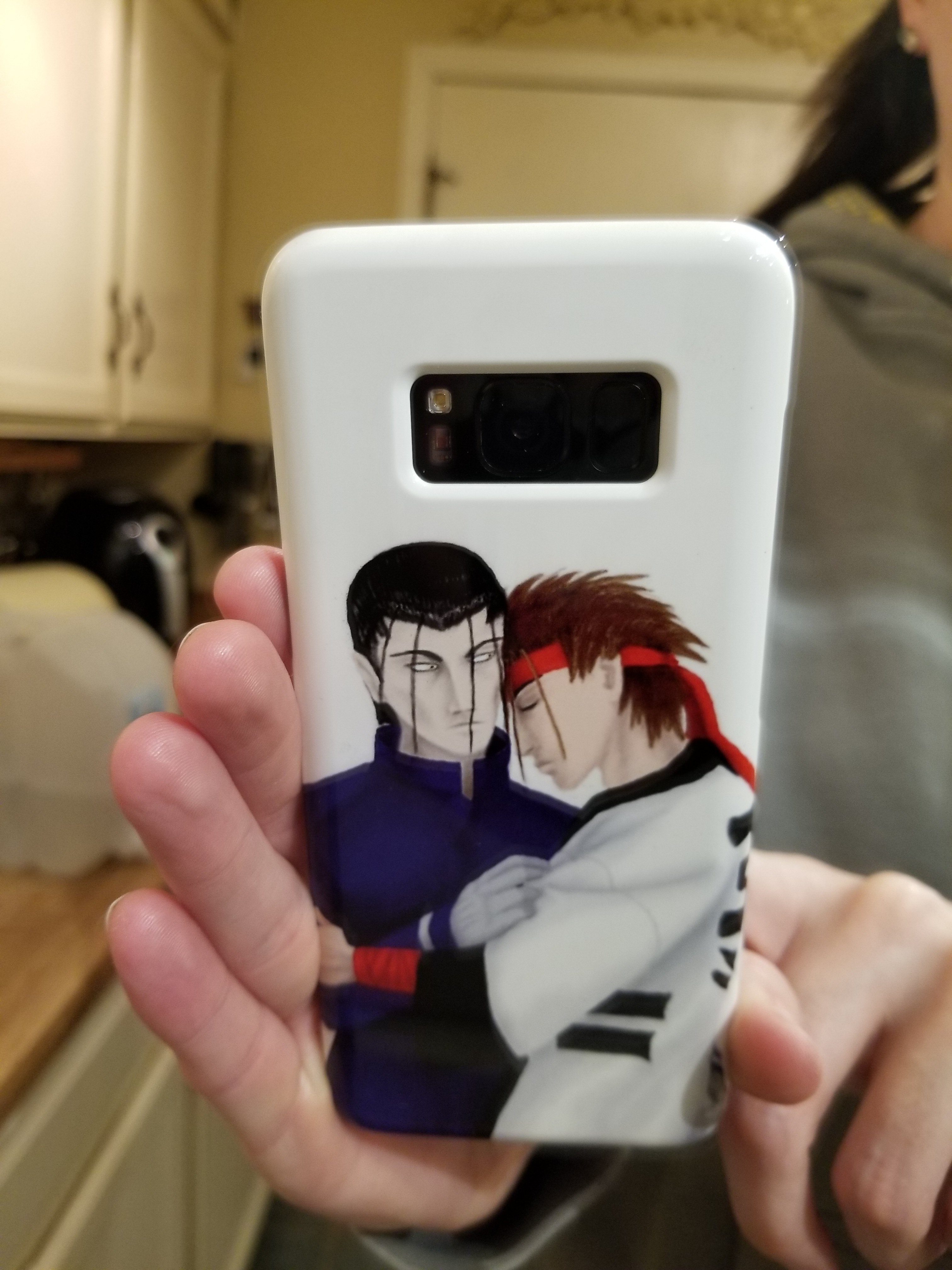 I need to draw a nice picture of them that I can use for a phone case, like I did with Quatre and Trowa that one time. That old picture (related to Years/Moments) is OK, but I’d like to have something knockout great like Really Living. Plus, you know, more visual art of Saitou and Sano. Perhaps that will be my next big picture after the two dogs.

This morning there’s some snow about. 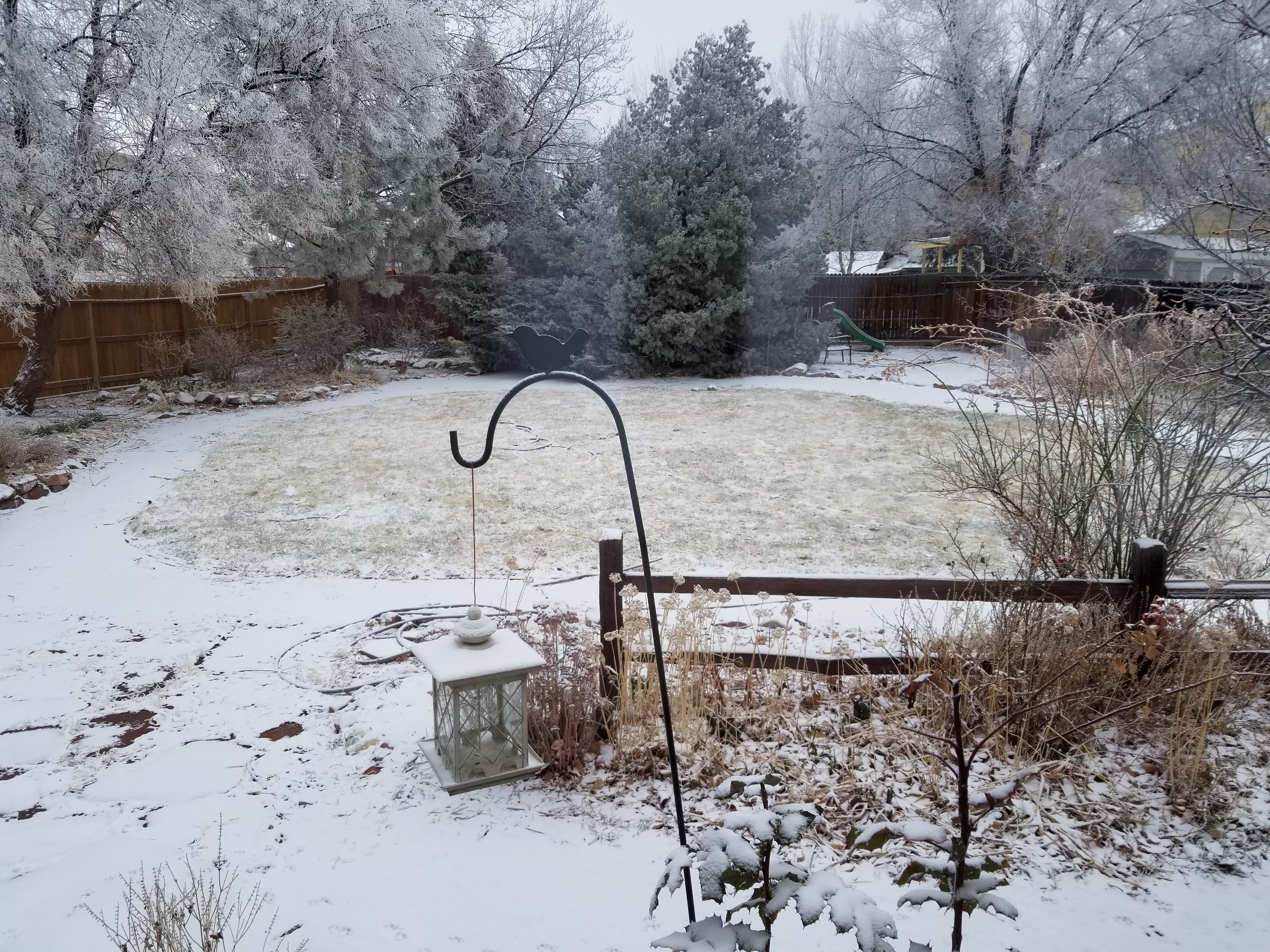 I thought the colors of the grass looked interesting: it’s starting to turn green again for spring, mixed in with the winter yellow, and all covered in white. That’s why I took yet another picture of my back yard in the snow XD