PL: State of the union, a picture of two dogs

This is more of an unproductivity log, because I have many more thoughts about the future than progresses to report.

I have written nothing since the gall bladder stones appeared, and it’s possible that’s for the best — a little break between the sad decision that came just before that and getting back on track with the fanfiction projects I still plan to work on — but it’s been depressing as shit. In fact I’m looking for a therapist for the first time in my life, so wish me luck with that as well.

So fanfiction. My mind has not changed: I’m going to continue working on the Big Three — Heretic’s Reward, Blood Contingency, and Aku Soku Zan(za) — until they’re finished (or until such time as I’m satisfied to discontinue any of them, though at least for the first two this seems highly unlikely). BC chapter 22 is lined up to be worked on this Sunday, and I think I will be able to do that. We’ll see if I’m in a decent emotional place for it, though.

I believe I will continue working on His Own Humanity as well. I’m thinking of making Sundays into Fanfiction Day (rather than exclusively Big Three day) on my writing schedule and giving HoH stories a more official slot in order to facilitate better, more regular progress. This will put bigger gaps between Big Three chapters/parts, but at this point, honestly, who gives a shit?

I have gone through my collection of RK fic ideas, and there is a small handful of items that won’t cut it as original fiction and are still too compelling to declare abandoned. This is no guarantee I’ll ever actually write them, but for the moment they’re still in potentia.

And what about exclusively Gundam Wing fic (i.e. non-HoH GW stuff)? I don’t know yet. Sharp-eyed readers may have noticed I’ve released no GW fic since January of 2017, and it seems likely I’ve kinda lost interest (except the HoH versions of the characters, who are my bebes). I have several story ideas kicking around, but, as usual, they’re mostly AU’s and many of them can be converted into original ideas without too much trouble. So that will probably happen.

As for these ideas that are going to be tweaked into original fiction… some of them are damn exciting, and that’s a big consolation prize. I love fanfiction, of course, but there are some aspects to original fiction that are fascinating and compelling as well. I believe Saturdays will become Original Fiction Day, and, once I’ve finished this TLY book, I will work on two or three original projects in rotation the way I do with the Big Three fanfiction stories — one of them, of course, being the next TLY book, but the others probably being some of these transmogrified fanfiction ideas. There’s one fantasy story in particular that was supposed to be about Kaoru and Megumi that I think is going to make such a badass original novel.

So that’s my writing plan going forward, and we’ll see how it works out. It’ll more or less start this weekend, but only after I have to freaking work tomorrow ARGH WHY DO I HAVE TO WORK A SATURDAY THE WEEK AFTER MY SURGERY.

On a related note, I’m not sure how comfortable I feel having RK fic up on the big sites anymore. As everyone probably remembers, I never liked much having it there in the first place, but since last September or so I’ve been trying to generate more traffic by posting it in larger quantities on AO3 in particular. But, though in internet terms my archive is just as public, and I’m not taking anything down from here, it still seems weird and maybe a little awkward to me to have RK stuff up “in public” on AO3 and ff.n.

It’s also going to seem weird if I take everything down from AO3 again, because I’ve been such a yo-yo over there as it is… and what does it really matter what gets thrown into the yawning shit-void that is ff.n? So I haven’t decided yet. Just, if you follow me at all in either place, don’t be surprised if things start disappearing soon.

Enough, I think, for now, on this topic. Let’s move on to something happier in the form of a picture of two dogs.

Whilst suffering from gall bladder stones and then recovering from surgery (the latter half of the recovery, not the initial high-on-Percocet part), not making any damn money and going a little stir-crazy and missing all the kitties in the world, I’ve nevertheless gotten some decent work done on this picture, and I like the way it’s coming along. Have some progress shots. 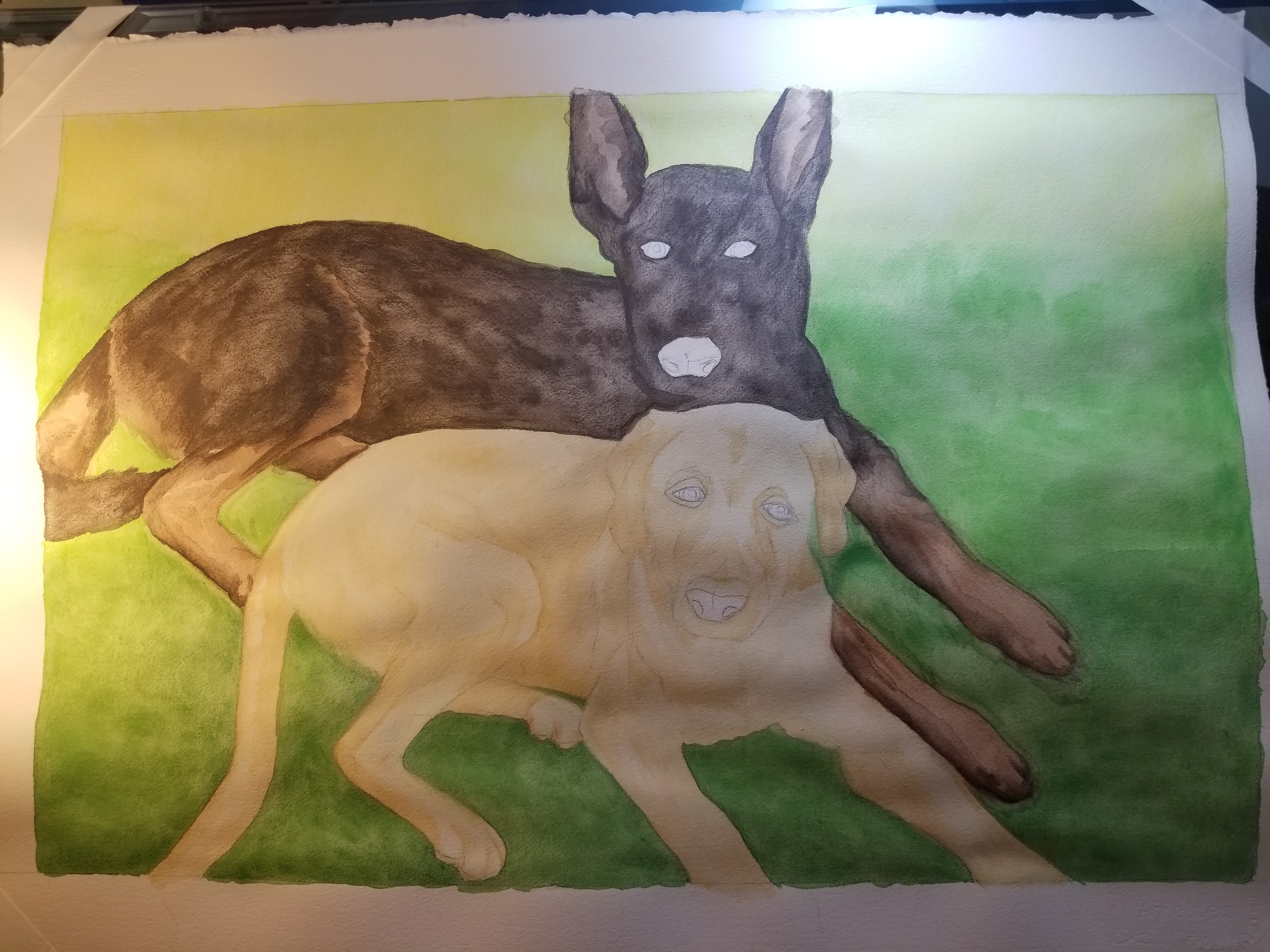 I forget whether I’ve mentioned it or not, but I’m using a watercolor paper that’s different from previous types I’ve used — that is to say, this one comes in single sheets from an art supply store, whereas in the past I’ve gotten a whole package in shrink wrap. So this is… better-quality paper, maybe? Different, anyway.

The biggest difference is that an eraser has zero effect on this paper except with the initial lineart. Once color goes down, erasing anything is no longer possible. Though erasing has always been a big part of my watercolor pencil process, I can get by without it… I just wish I’d known from the start of this project that this would be the case XD

I’ve had to find a different method for correcting slips of color outside the lines, and there’s a remaining segment of the penciled blocking that didn’t get entirely erased before that’s clearly visible down Ruger’s hindquarters if you’re close up — his coloring is too light to hide it, and it simply won’t go away now. Sad day.

Still, I love the way this paper takes the watercolor — it’s an enchanting enough look for me to forgive entirely my inability to erase. I believe I’ll get some more of this paper and do some other big pictures on it (making it inconvenient that I didn’t make note of what its press or whatever is called). As usual, I’ve got all sorts of stuff in mind that I probably won’t end up drawing any of. 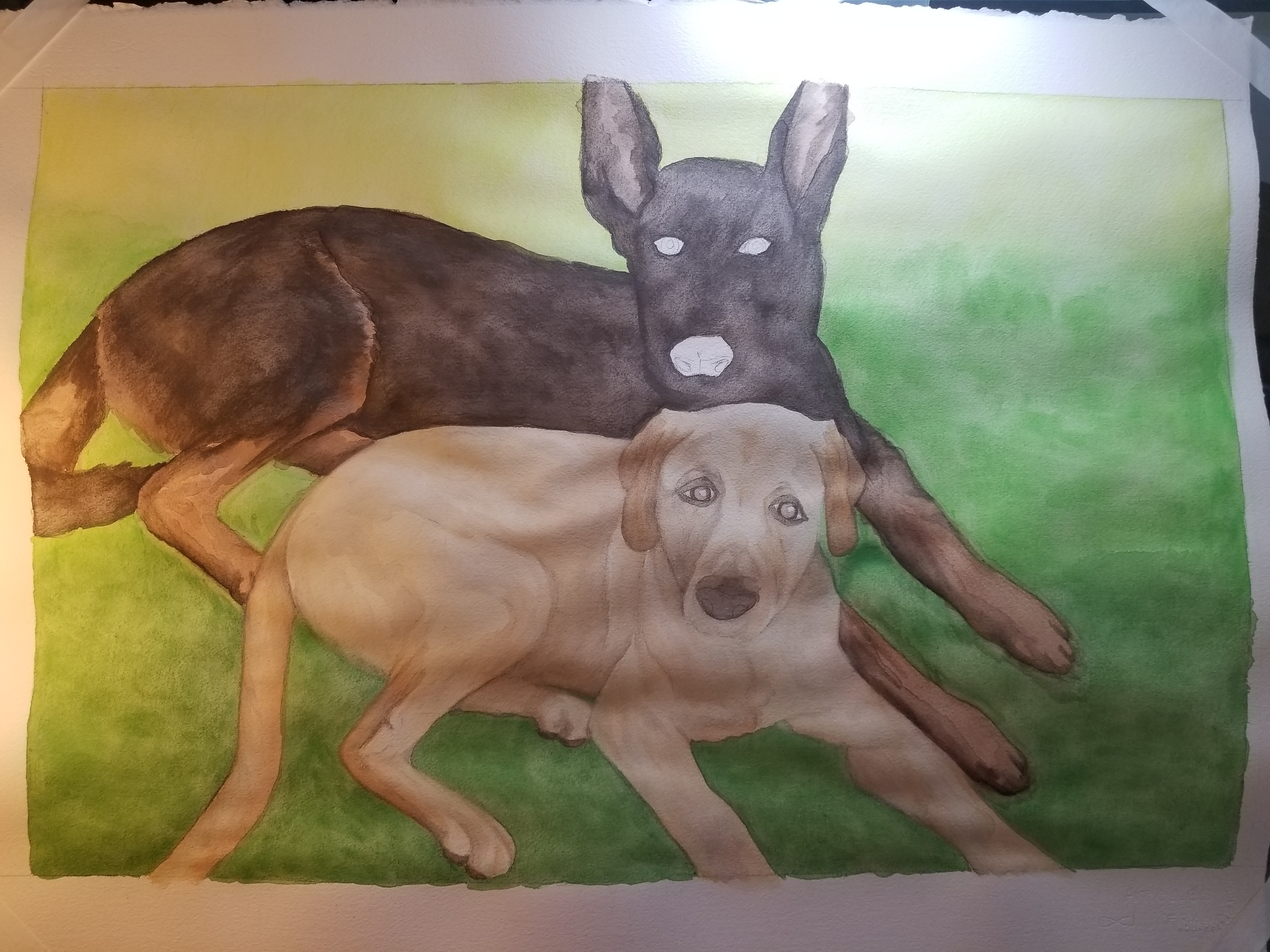 One problem with this arrangement on the draft table is that when the paper, as watercolor paper always does, warps with the continual application of water and refuses to lie flat, there’s not much to be done about it. The old trick of wetting it and then weighing it down with textbooks isn’t really feasible on the draft table (which has a weight limit), and also I think I managed to get rid of all my textbooks finally. It’s something to consider. 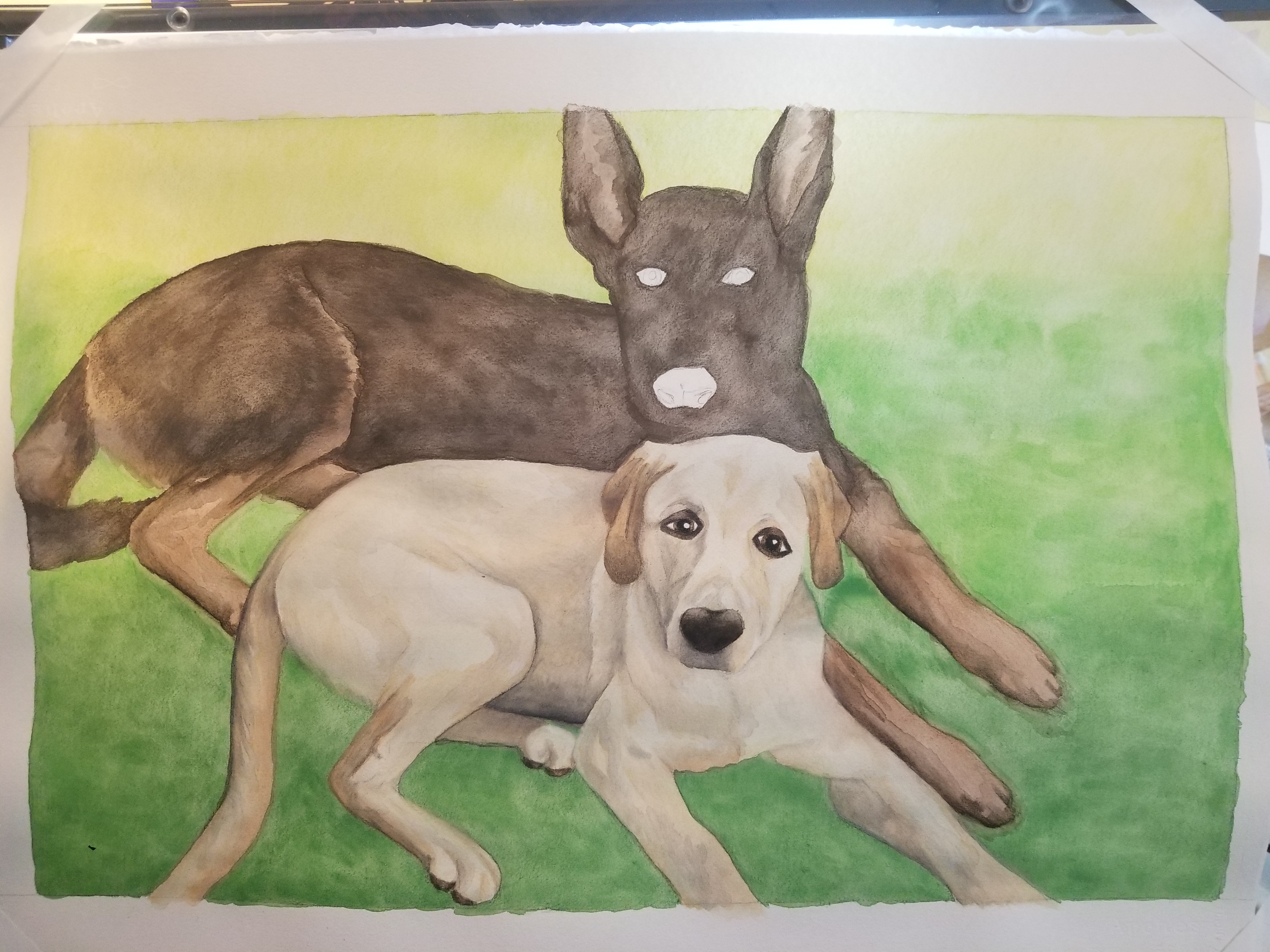 At this point you can see I finally figured out a better way to arrange some of the, uh, five lamps that surround my draft table to get a less glarey photo of the current project. What an amazing difference! The progress shots aren’t really all that important, but as long as I’m going to be taking them, you might as well be able to see what you’re looking at, right? 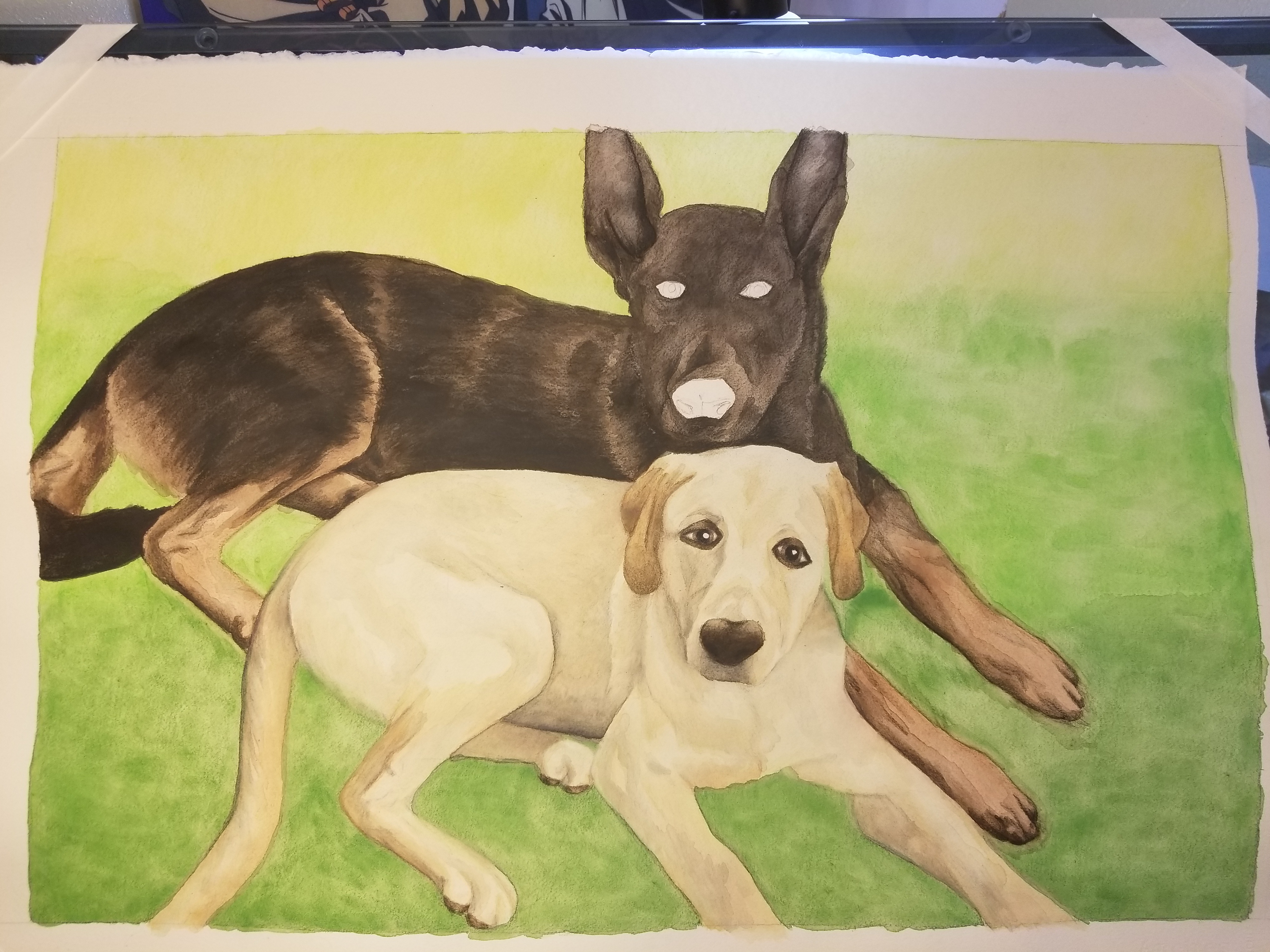 Though here I don’t know if the camera was adjusting for the new black on Hammer or what; cameras and lighting are weird.

So I’m still not sure whether this picture will look anything like the actual two dogs it’s supposed to be depicting, but I’m still pleased with how it’s coming along. We’ll see how much I continue to like it once I get to the grass part, though…